The plan for Saturday was to get through Birmingham and to the east side of Solihull, a journey of 16 miles and 14 locks which should take about ten hours.  We set out about nine to get through Curdworth and Erdington to Salford junction which is under the M6 at Spaghetti junction.  Karen walked for a while with Buddy as the rest of the journey was going to be in urban areas.  There were plenty of butterflies around and she got a picture of a male Gatekeeper (aka Hedge Brown)… 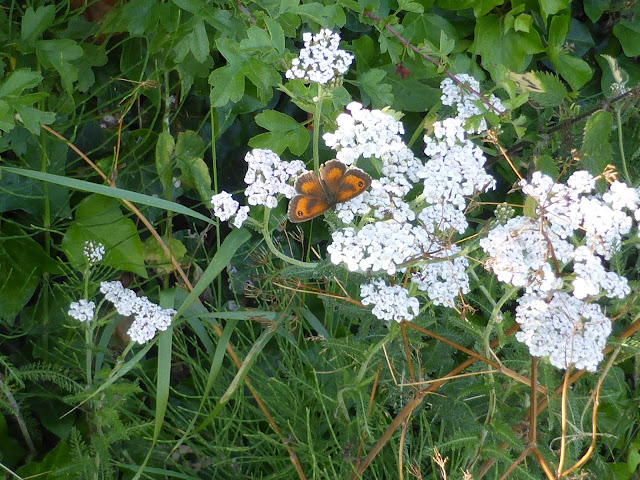 … and a Large White which refused to open its wings. 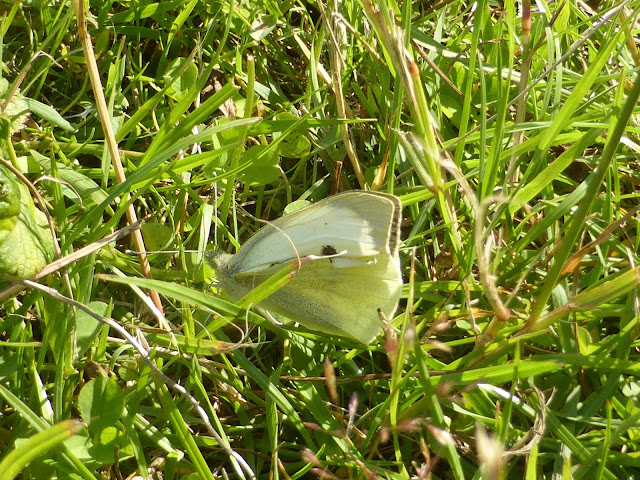 She also got to see inside a bridge stanking plank store.  We have a family WhatsApp group so we keep in touch with the children every day wherever they are.  They do tend to take the rise out of us, for example about our fascination for stanking planks.  They pointed out the other day that Steve and Sophie must be my favourite children as they have the same initials as Stanking Plank. 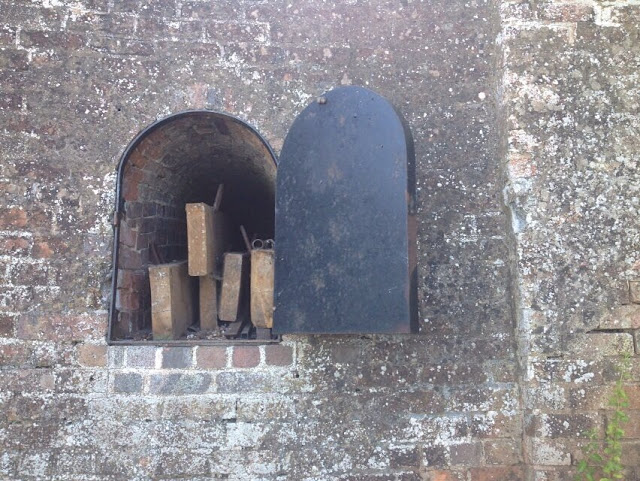 We went through Curdworth tunnel which has the towpath inside rather than over the top. 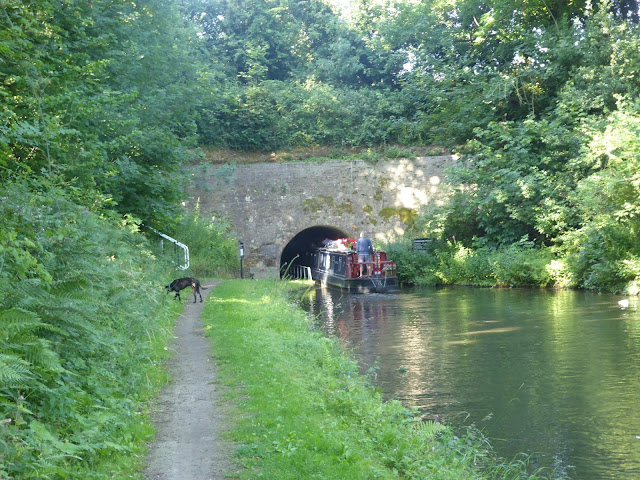 Then up the three locks at Minworth. 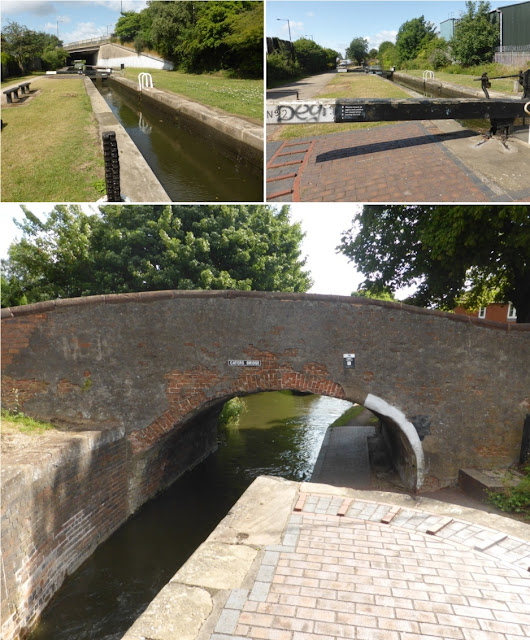 These signs seemed to be contradictory as you cannot leave a lock empty unless at least one bottom paddle is left open. 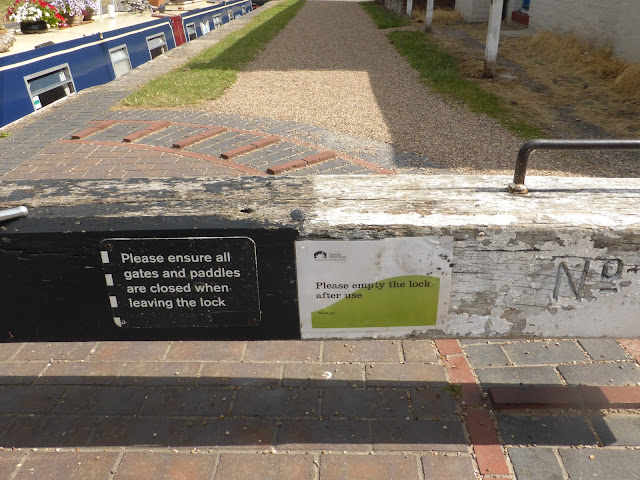 As we got into the outskirts of Birmingham the bridges had the red water access doors in them.  When we were here earlier in the year we found out that the doors were put in by the Fire Brigade during World War II so they could have quick and easy access to water in the event of fire from bombings.  On the face of it it was a good idea in Birmingham as there are over 100 miles of canal there – in those days there were even more.  All the ones we had seen before were really distinctive as they had been cut into brick bridges but we went under one that had been cut into a railed bridge. 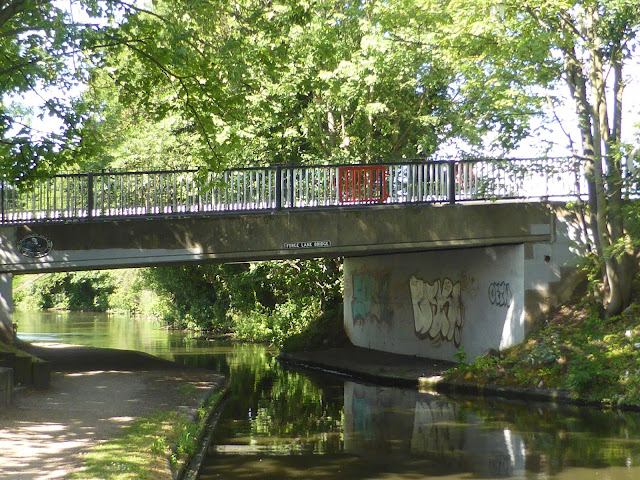 Buddy, as usual, drinks from the canal rather than his own bowl of tap water.  He even does this on the boat, preferring Karen’s watering can to his water bowl. 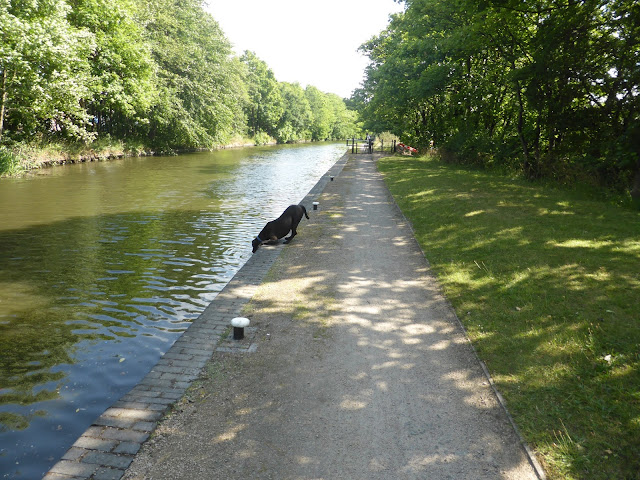 When we went under this factory at Erdington we knew we were nearing Salford junction. 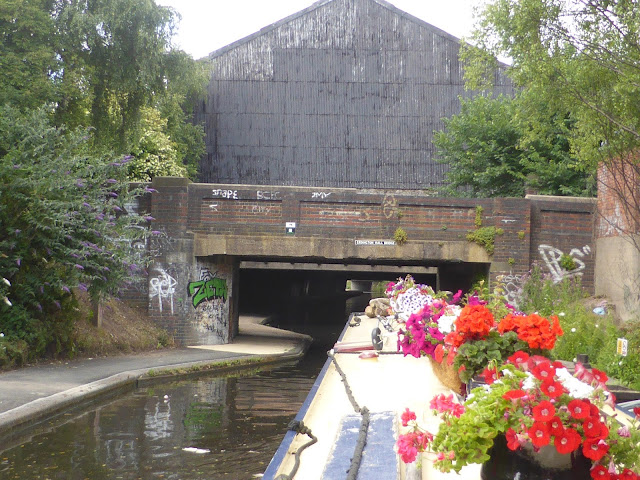 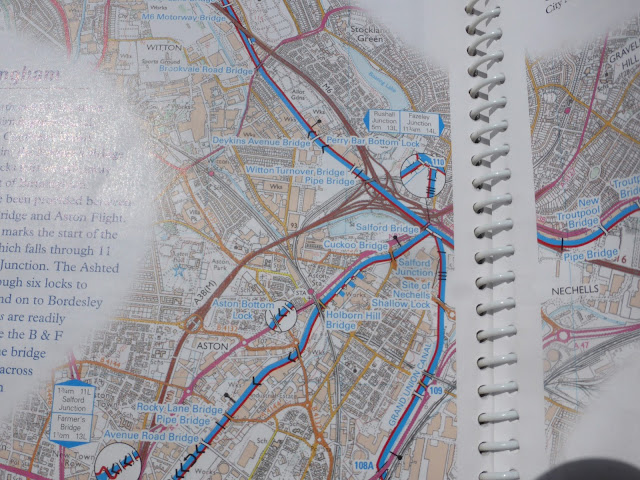 This is the junction and we had to turn sharp left under the first brick bridge. 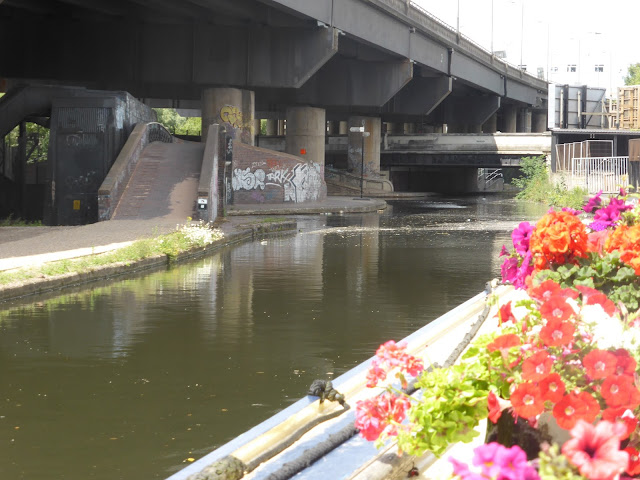 Here are a few shots of the junction. 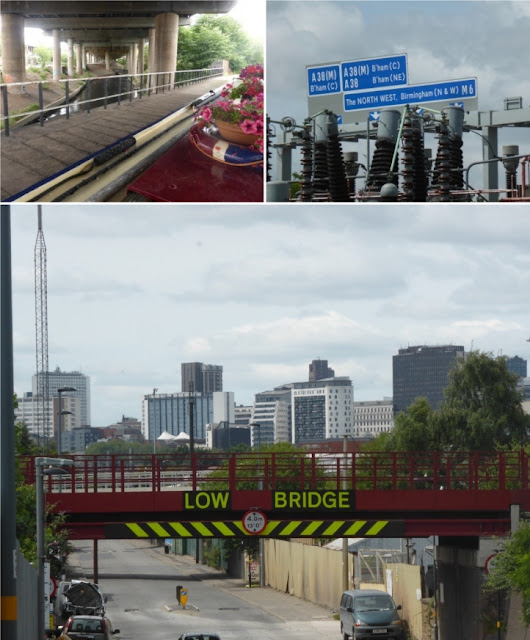 There are five locks on the Grand Union between the junction and the middle of Birmingham – they are known as the Garrison locks and when we came down in the winter it was dreadful.  There was more litter and graffiti than we had ever seen anywhere else.  Consequently we weren’t looking forward to cruising this stretch again.  We were in for a wonderful surprise: there was hardly any litter on the towpath or in the water – it was a complete transformation.  A lot of hard work had clearly been put in and hopefully littering will stop as it is now so clean.  Even the run down locks looked pretty. 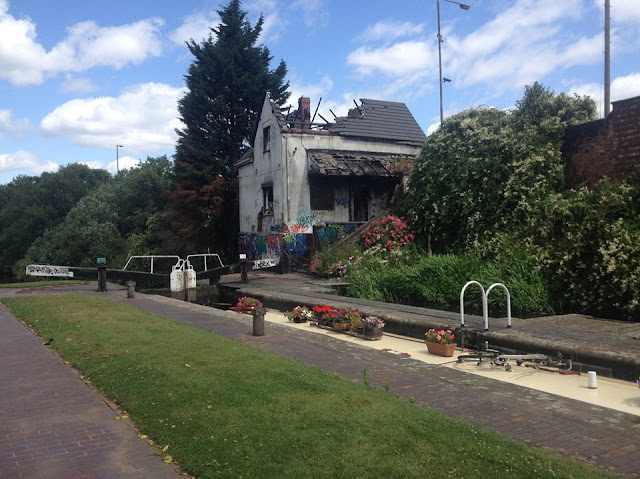 At Bordersley junction we turned south east and went up the six Camp Hill locks.  Whilst entering the first lock the engine cut out.  I got into the weed hatch and found many metres of cable caught round the propeller.  Fortunately I only had to do this three times on the whole journey through Birmingham. 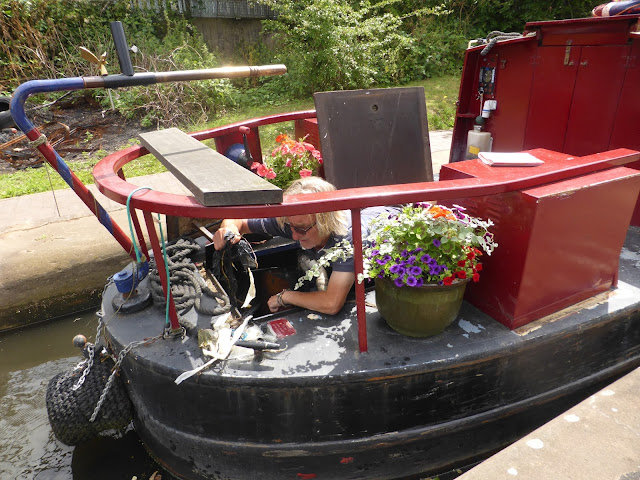 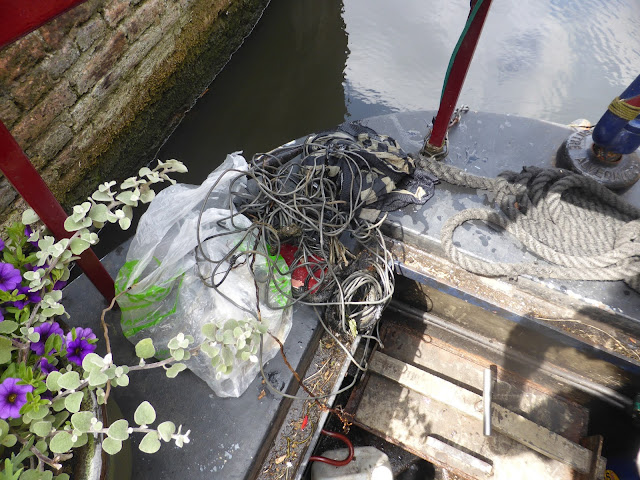 Karen finally started crossing the locks by stepping between the gates rather than walking round.  Even though I usually do it, Karen has always been reticent (sensible); however, she had been spurred on earlier in the day when we saw a short and overweight girl doing it. 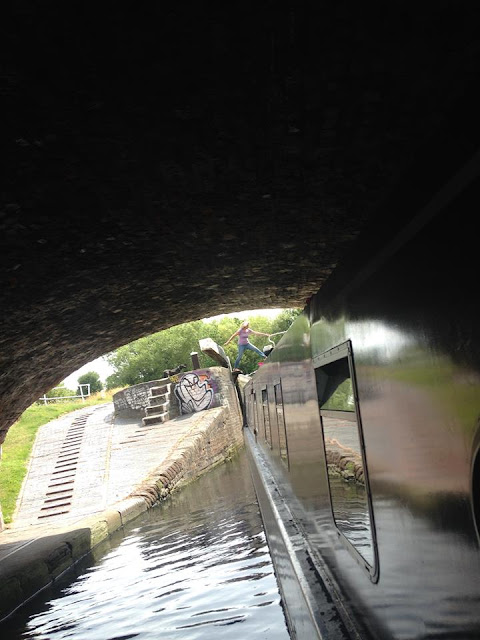 We walked into Solihull on Sunday morning to catch up on food shopping and then set off for Kingswood.  This meant going down the five locks on the Knowle flight which are really exposed and can prove troublesome because it is often windy.  We found them really difficult in the winter as the wind was gusting across the valley.  Anyway we got to a really nice quiet spot before the locks and both decided at the same time that we should just moor up for the rest of the day and relax. 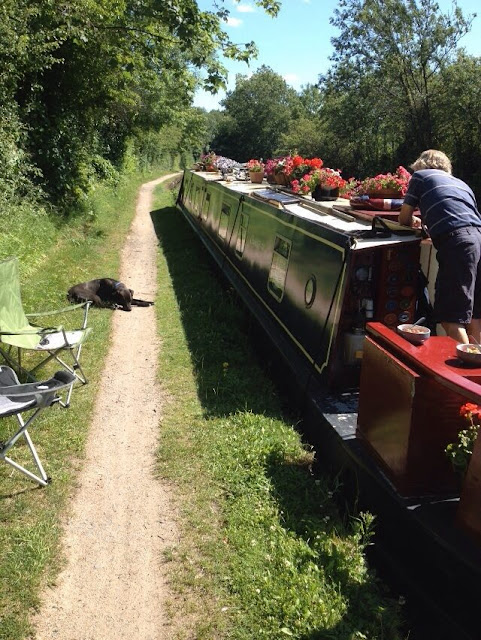 On the way we had passed a village cricket match which seemed happier than the second Ashes test. 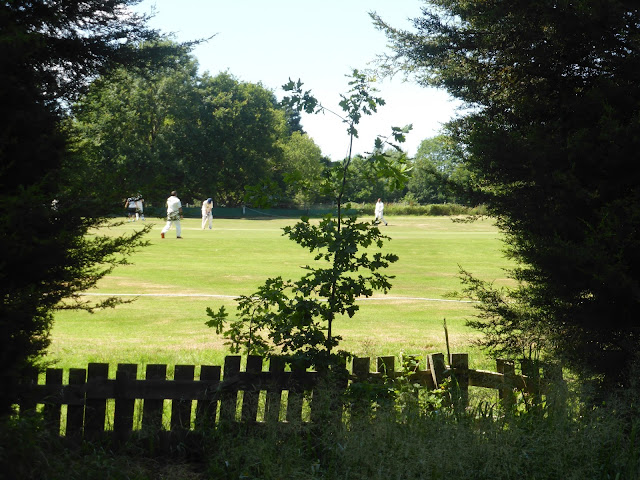 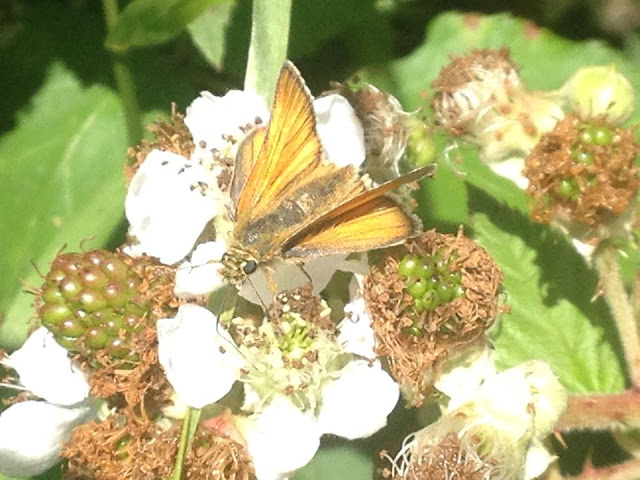 When we went under the M42 we saw the bizarre sight of an old man playing an Alpenhorn.  What made it so strange is that we were a long way from any roads or villages so he must have transported the horn along the towpath. 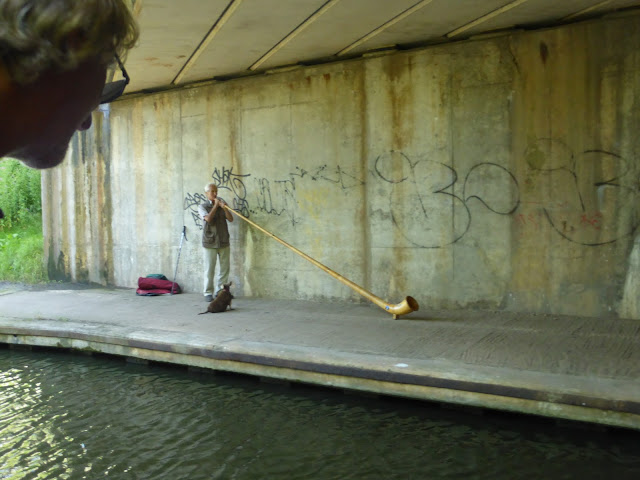