When I pulled up the kitchen blinds on Friday morning, I was practically face to face with a guy looking out of his van parked by the boat.  The decals on the side of the van indicated that he was a boat mechanic, so I guessed he was looking for the boat that turned up late last night.  The boat’s batteries were knackered, and they had arranged to have them replaced in the morning.  The mechanic came over assuming it was me who needed the batteries so I had to explain that it wasn’t me and also which boat it was.  As it was before seven, I assume the mechanic had been sitting in his van until he saw signs of life on one of the four moored boats.

While Karen was out for her run I heard a knock on the window, another van had pulled up, this time it was two guys in a VNF van.  They were checking when we were leaving and making sure we knew the canal was closing and would be off by Sunday night.  That must have been the sixth time we’ve had that conversation in four days!

Karen knows how intrigued I am about railway swing bridges and she came across an old one during her run and it was next to a road lift bridge.  We got the fascination for rail swing bridges when we came across an old one on Oxford on a cut that joins the Thames to the Oxford canal.  It's amazing to think that trains could potentially be held up leaving or entering Oxford station while a boat went through.

It was due to be a warm and muggy day with no sun but soon after setting off the clouds started breaking up and it remained like that for the rest of the day.  We had good internet reception all day and into the evening so were able to listen to the second day’s play of the fifth test too while cruising and later on.

As we dropped down the first lock at St-Dizier we passed the long high mooring quay that was hosting a fishing match on our way up the other day.  They were there again this morning and it really looked serious stuff judging by the equipment.  Once again, we wondered whether anyone would have the nerve to tell them to move if they wanted to moor there.

A little further on we saw a sight we had never seen before.  A lone fisherman was sitting on his stool and had a cat sitting there with him!  He was so wrapped up that we wondered if they had sat there all night.

The Rafale jets were out practising their manoeuvres again and we noticed sentry boxes every so often along the edge of the airfield.  It really felt like it wouldn’t have been out of place to see heavily armed guards in them. 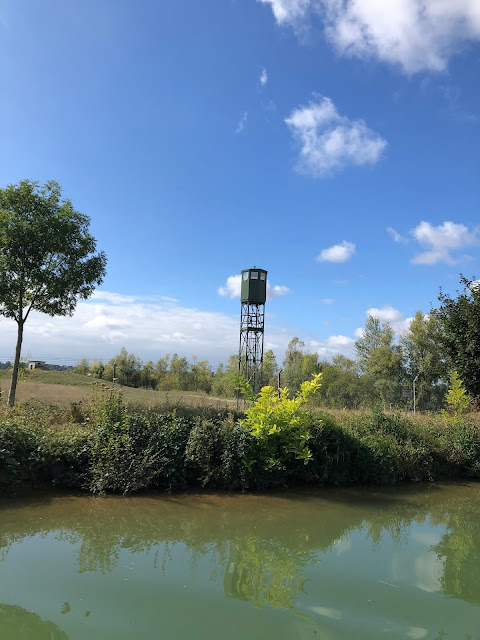 On the way up we had seen some mooring bollards outside the village of Orconte so made that our target for the day.  That way we would only have 10 kilometres or so to do on Saturday thus keeping to our promise of getting off the canal by Sunday with a contingency day in hand.

After a late lunch we went for a walk taking in Orconte which turned out to be quite a small village.  It was a real mixture of old and new.  There were plenty of timber framed buildings but also quite a few modern single storey houses… 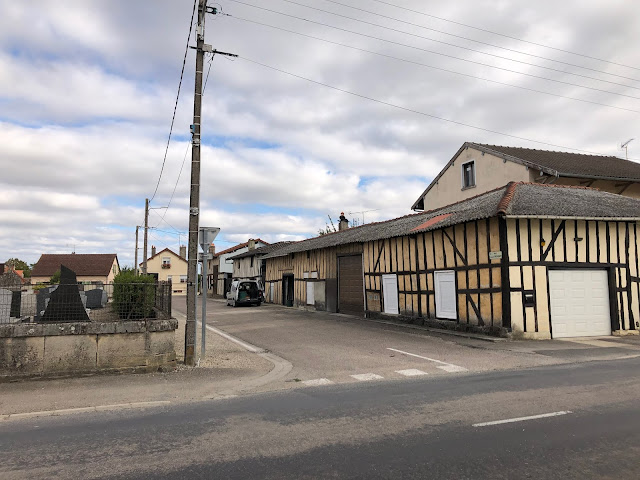 …and also, this strange house that was for sale: 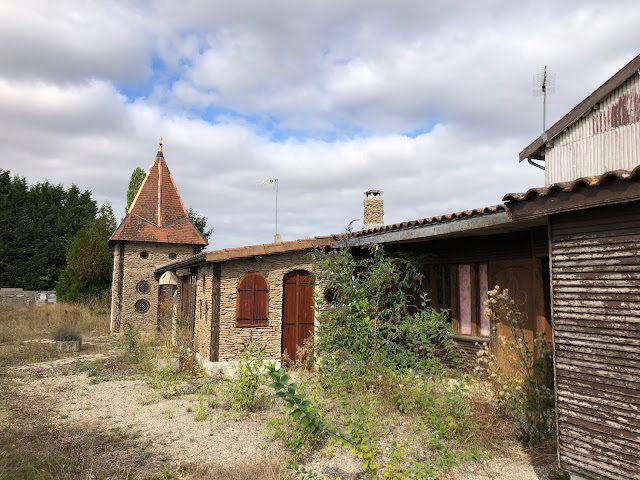 We had rather assumed that with the canal closing that commercials were no longer on the canal.  Because of this we had even considering mooring on pins, in the middle of nowhere, as we wouldn’t be worried about the wake pulling the pins out.  We were back at the boat later when we noticed it moving slightly and immediately guessed a large boat was on its way.  Sure enough a commercial was about to come past so we were glad we had moored on bollards 😉

No sooner had Melinda gone past and down the lock then we realised another one was coming!

On Friday we cruised 17 kilometres down eight locks.

Saturday was to be our last day on the Canal entre Champagne et Bourgogne as we headed for Vitry-le-François.  We weren’t the only boat trying to get off the canal before it closed either.  We were moored by a lock and could see the traffic lights while lying in bed; especially as we still have the doors wide open all night albeit with a mosquito net covering the doorway.  The locks are operational at seven in the morning and no sooner had we seen the red light come on indicating the lock was usable, then the green light came on too.


The green light appears as soon as someone has used their télécommande so we knew a boat was coming and as soon as the red light went out, a cruiser came past at such a rate we through he wouldn’t stop in the lock.  Those boats can turn on a sixpence and all was well.  Soon afterwards another boat went through, it was a nice German couple we had met when we were on the River Saône earlier in the year.

We didn’t hurry off and ended up leaving about ten o’clock.  We planned on stopping briefly in Vitry as we needed a few things and there was a handy Aldi close to the last lock.

Karen walked with Buddy for the first few kilometres and found one of the kilometre markers we had missed on the way up.  When cruising over here boaters refer to places by their ‘pk’ or point kilometre.  So, for example, we had been moored at pk 13.7 on Friday night and we had received a message from Nikki that the girls were mooring at pk 4 or 3.5 that night.

After coming out of the first lock we saw a kingfisher and realised it was the first we had seen on this canal, although we saw two more over the next couple of hours too.

On the way up we had thought that the canal had started at a junction on the east side of the town where the Canal latéral à la Marne heads north and the Canal du la Marne au Rhin heads east.  As we passed the ‘goodbye’ sign we immediately passed another sign welcoming us to the Canal du la Marne au Rhin.  This was 1.5 kilometres before we reached the junction, so it meant we’d been on a small section of a canal that we hadn’t realised!

We managed to find a spot to moor on a high quay lined with old commercials that had been, or were in the process of being, converted to private boats.  To save locking up the boat, Karen went off to pick up the few things from Aldi while I stayed behind with Buddy.  When Karen returned, we found we had both come to the same conclusion: we felt quite safe leaving the boat here and should go for a look around the town.

You may have read the blog entry for when we came through the town just over a week ago.  We hadn’t thought much of what we could see and thought it was the grimmest place we had been through in France.  Well, after a pleasant few hours walking around, we have to admit we were wrong and found it a quite delightful.

The only drawback was that the tourist office wasn’t open at weekends, so Karen devised our own tour before setting off.   It was yet another hot day and being early afternoon, the place was very quiet; we still can’t get used to going into towns and seeing few cars on the move especially on a Saturday.

As usual, the only gardens that weren’t bone dry and lacking that green feel were those of the mairie where the grass was clearly watered daily.

We found the main church was quite an unusual style.  We suppose that was because it was built later than most, in the 17th century, replacing the previous one that had been destroyed.

Of course, Buddy knows that churches were built for the purpose of keeping people cool in the hot summer days.

The church was built facing a large square, Place d’Armes: 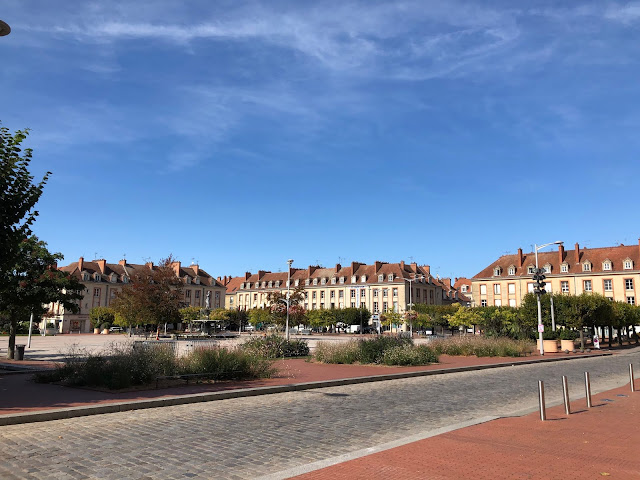 In the centre of the square stands a cast iron statue representing the goddess of the Marne upon which the town was built.  With three canals and the rivers Saulx and Marne, the town had excellent communication channels in the 19th century.

Several trees and litter bins in the square were wrapped in hand knitted blankets.  We found out later that these ‘yarn bombs’ were a result of a local initiative to bring the generations together.  Young and old alike were encouraged to knit squares which were then joined together to symbolise the bringing together of the generations.

Looking down one of the streets leading off the square we could see the Porte du Pont at the far end.  This ‘door’ was built in 1748 as a monument to Louis 14th and was one of the four entrances through the city walls.

The monument was disassembled in 1939 to make way for the construction of the Paris to Strasbourg road and rebuilt in its current site in 1985.

When we returned to the boat, we walked along the opposite side of the canal and passed a building described as the stock exchange.  Try as we might we couldn’t find any information about the history of the place other than it is often used for the display of vintage cars!

Later on, we carried on cruising so we could find somewhere to moor out of town.  We joined the Canal latéral à la Marne and dropped down the first lock before finding somewhere nice and secluded for the night.

On Saturday we cruised 16 kilometres down eight locks.