As Karen was working from home (WFB) on Friday it meant the car was free so I took a trip to Aintree where the shell of our new boat is underway.  The base plate went down last week and they have now welded on the sides up to the gunwales:

On the way to the boatyard I went through an area of Liverpool called Fazackerley.  I knew the word but not that it was a place.  I have heard Liverpudlians use it in place of 'exactly' as in 'fazackerley my friend' for example.  Now at least I know where the expression comes from.

Back to our new boat - this is the stern.

The brass tube on the pointy bit is where the propeller shaft will go.  The silver oval thing is one of the sacrificial anodes which are made of highly active metals that are used to prevent the hull from corroding.  The engine will sit inside the triangular bit once mounting plates have been welded in.  On the two long sides of the triangle, skin tanks have been welded on.  The skin tanks are used to cool the engine as they expose a large surface area of coolant to the canal water.

There were twelve boats in various stages of build in the workshops - no wonder there are so many boats on the system nowadays!

Mainly for our records here are a few more shots of the boat.


On Monday I had found what looks like a decent butterfly site along a disused railway embankment at Stockton.  I was determined to find Grizzled Skippers, Dingy Skippers and Green Hairstreaks there – three butterflies I haven’t seen for a few years.

Since Tuesday the days have practically all been the same weatherwise.  Frosty start: so frosty that Karen has had to scrape the ice off the car windows before driving to work.  Then by about 8 o’clock, when Buddy gets his pre-breakfast run, the sun is fully out and there is hardly a cloud in the sky.  I have even sat outside to eat lunch this week with Buddy doing a bit of sunbathing.

There is still a chill wind so we leave it until about 11 until venturing to the site at Stockton, either on bike or on foot.  I’ve been lucky and not had a puncture for a few days now.  Unfortunately I have not yet found the butterflies I am looking for; it has just been a little too chilly.  I have seen a few Brimstones and Orange Tips but they seem a bit hardier and have been on the wing a while now.

During the afternoon the skies have darkened and we have either had heavy rain, sleet, hail or even snow.  This was walking to meet Karen when she got home from work on Tuesday.

On Wednesday evening we walked a mile or so down the towpath to meet Karen at the Boat Inn which has reopened after yet another change of hands.  We believe this is the only time it has been open over the several times we have cruised past it over the years.  Mind you, not sure about their attention to detail:

Anyway, Friday will be different.  Karen will be working from the boat and I will drive up to Liverpool as the boatbuilders have started on the shell for our new boat and I want to see progress and get some pictures.


Monday was forecast to be grey and cold so obviously not a butterflying day. As we are now moored in a new spot Buddy and I used our walks to find locations that were likely to be good for butterflies.  Our first walk took us up to Stockton where we found a disused railway line.  This looks a perfect spot to revisit during the week when the sun is out.  The steep banks provide a microclimate on the old railway bed.  Buddy thought it was pretty good too!

The area we are in is well known for its deposits of blue lias – a bluey grey clayey limestone.  This is why the water in the canal pictures tends to be blue lately.  This is an old blue lias quarry…

…and this is the spoil heap which may also be a good area for butterflies.

Many fossilised dinosaur skeletons have been found in the quarries; the most famous was an ichthyosaur found in 1898 which is one of the most complete specimens ever found and is now in the Natural History museum in London.  A drawing of it can also be seen on the traffic signs announcing the village of Stockton.

Later on we came across Nelson's Wharf which is currently being renovated.  This arm used to lead to a limestone works which was demolished in the 1960s.  Apparently the army used the opportunity to train their demolition engineers.  Boats used to bring coal into the works up the arm and carry cement out.  Willow Wren boat training are now based where the arm joins the Grand Union and several of our friends have taken their helmsman courses there.

The renovation is being carried out under the eye of the Warwickshire branch of Butterfly Conservation, amongst others, and they have erected tis helpful board to help the uninitiated identify butterflies on the site. 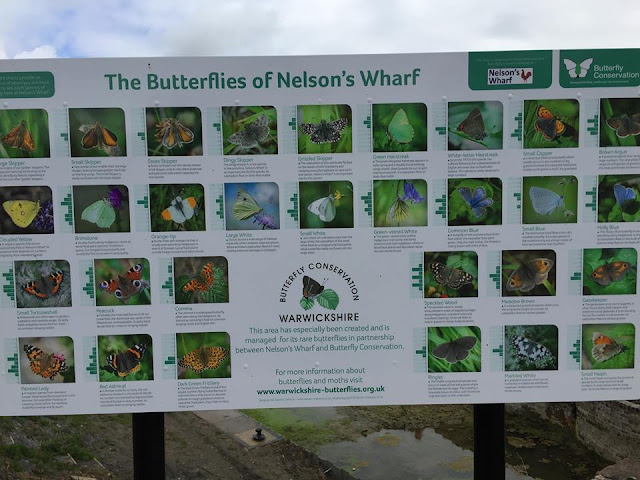 
When we move on from Napton reservoirs we will be going through our first wide locks for nearly seven months.  Even though we have been through locks thousands of times it always makes us stop and think when moving from a narrow lock canal to a wide lock canal and vice versa.  The ways we have to work together to operate the locks are quite different on the two types of locks.  Anyway, on Friday I took Buddy down to the first set of locks to make sure he could remember how to cross them.  I needn’t have worried as he was straight across without any hesitation.

Our friends, Jan and Gordon, came to visit for afternoon tea on Saturday.  They had just moved their boat from Thrupp to Cropredy on the South Oxford canal.  It was really good to catch up with them and hear all their boat and life news.  I have to admit that when we invited them for afternoon tea we weren’t really sure what that meant so asked our family Whatsup group. The suggestions we got were many and varied from macaroons, little cakes, sandwiches without crusts, cream teas, scotch eggs and fruit salad – almost anything as long as doilies were used.

During the week I had seen Muntjac deer near the boat but luckily Buddy hadn’t noticed.  This meant extra vigilance in this spot as we had to make sure he doesn’t chase deer as well as ducklings, chickens, ducks and boat cats.  On Saturday morning we were walking round the reservoir and he spotted a deer before we did and he was off – the deer got away easily as it was happy to leap a wide ditch and fortunately Buddy is not keen on water..  Needless to say he was in our bad books and we decided we would have to move on and moor somewhere else as it’s not much fun keeping him on a lead all the time (for him or us).

So on Sunday morning we set off down the three locks on the Calcutt flight to find our next mooring.  The locks on the Grand Union from here to Birmingham were originally single width locks and double width locks were added soon after the canal was opened to ease congestion and speed up journey times.  This is the top lock and you can see the old narrow lock on the left.

Before going down the locks we took on water and I noticed yet another lock like structure on the left.  I have been unable to find out what its purpose was.


This is looking back to the middle lock from the bottom of the three locks.  The tarpaulin covered area on the right is where the old single width lock is being used as a dry dock by the local boatyard.

We cruised about a mile after going through the locks and moored up in an area called Tomlow.  The towpath is not muddy here and there is easy access to the road for Karen’s daily commute.

Last week these guys came past us and I also saw them on other sections of canal when out for walks. As I said at the time I wasn’t sure what they were doing but I have now found out that they are carrying out fish surveys.