Wednesday was due to be our last hot day until next week, so we set off for Châlons-en-Champagne when Karen returned from her morning run.  We were practically at the junction with the Canal latéral à la Marne and only had to cruise through the port at Condé-sur-Marne before we were turning left towards Châlons-en-Champagne.

Once we were back on the Canal latéral à la Marne, the first 13 kilometres were dead straight.  With the sun out and not a breath of wind it wasn’t as boring as you might imagine.

We had two locks to ascend and we could see from quite a distance away that the first one had a lot of water gushing in from the overspill.  I know I’ve mentioned these before, but this looked the fiercest we have come across.  The approach into the lock had to be taken faster than normal, facing into the overspill, straightening at the last moment and then hard into reverse to bring the boat to a halt hopefully by a bollard for Karen to hook her line over.

When we came out of Reims, I recounted the story at one particularly deep lock where Karen had had difficulty getting a line on a bollard and I ended up reversing out of the lock and back in again three times before being successful.  A fellow boater commented on the blog that I should use bow thrusters to help keep the boat steady.  That’s all fine and dandy but we don’t have bow thrusters and rely solely on power driven from the rear.  Bow thrusters are mounted perpendicularly to the side of the boat at the front and, when applied, move the front left or right depending upon the need and therefore ideal in that situation.

We are still using poles overhanging the water to set the locks in motion and on one we nearly suffered from having a narrowboat.  We could only just reach the pole from the deck; I know we could get on the roof to do it but it’s preferable not to when in motion.

After a couple of hours, we were approaching Châlons-en-Champagne and looking at our map could see why it is also called ‘Sparkling Venice’ as there appear to be many waterways. The canal runs through the town of course but also the River Marne which splits into three courses as it makes its way through the town.  There are also two tributaries, the Mau and the Nau  that join the Marne and a couple of smaller canals, the Louis XII and the Saint-Martin.  There are also several places to moor including a port where overnight fees are paid but at least you can get water and electricity there.

We decided to moor at the first available spot and then go for a walk around to see what the other moorings were like.  The first moorings were just below the lock in town and, as there were no boats there already, we tied up to the bollards, locked up the boat and set off to explore.

After investigating the various mooring spots around the town, we decided that we would move up to the finger pontoons at the port below the cathedral but stay where we were for the next night or two and move up on Thursday or Friday.  As Lauren is joining us for a few days it would be good to have somewhere where we can connect up and not worry about being miserly with water or electricity.

We had a cursory look around the town, including a quick pit stop at one of the many bars in the squares.  As usual we popped into the tourist information office to see if there was a town heritage trail.  They seemed quite geared up and even had a leaflet in English which we will follow on Thursday.  Here are a few of the sights we took in on our quick look around.

Friends had been due to pop in and see us, at Condé-sur-Marne yesterday, on their way down to their house in the south.  Unfortunately, they had had an unlucky incident that prevented them leaving the UK until Wednesday, so they were going to meet us in Châlons-en-Champagne instead.  They contacted us in the morning to explain they were delayed yet again, this time because of long hold-ups at the channel tunnel.

The next we heard was that they had got through the tunnel but had hit some debris on the autoroute outside Reims.  No one was hurt but the damage to the front of the car made it undriveable, so they were going to have to stay in Reims while they sorted out what they were doing.  What a start to their journey, but hopefully we will meet up again soon.

By the time the sun was going down the wind was getting up and clouds rolling in and it really looked like we were going to get some rain.  The rain never came but the temperature had dropped somewhat and for the first time in weeks we had to close the doors at night.  Mind you, it did lead to a more comfortable night’s sleep.

On Wednesday we cruised for 16 kilometres up two locks.


Karen led our heritage trail tour during Thursday morning and we soon realised how many waterways there are in this city.  Many stretches of the canals and rivers were covered over in the nineteenth century as the city expanded but the tunnels are still navigable by small craft.  Boat trips are available as guided tours so we will probably take one on Saturday when Lauren is here.

It was definitely cooler but at least it was still shorts and tee-shirt weather.  Here is a selection of some of the sights we saw on our city walk:

I’m not making typing errors, the two main tributaries to the River Marne in the city are the Rivers Nau and Mau.

One thing that struck us as we walked was that there was very little to remind us that we were in Champagne.  Every village we have visited for the last few weeks has had champagne houses on, what seemed like, every street.  The towns have had tourist shops given over to champagne and champagne memorabilia. Not so in Châlons-en-Champagne, all that had was its name and its history.  We commented that as it was on the Marne waterways that it should have been called Châlons-sur-Marne.

Outside one of the places of interest was a placard explaining the history of the city and one of the things we learnt was that in 1998 it changed its name from Châlons-sur-Marne to Châlons-en-Champagne!  It made us wonder about the 'Sparkling Venice' epithet too.  Our first thought was that the sparkling referred to the many waterways but we then realised it was probably champagne.

The statue in front of the church is of Jean Talon who was the first prime minister of New France (now called Canada) in the 1650s and was also responsible for the development of other French colonies.

During urban redevelopment in the early 1970s several historical properties were saved from obliteration by being dismantles and rebuilt elsewhere in the city including this 15th century building called Clémangis House.

The Hôtel Dieu was bombed during the second world war but continued being used as a maternity hospital into the 1950s.  It was finally demolished during the 1970s redevelopment and all that remains is the entrance which is now used as the entrance to the post office. 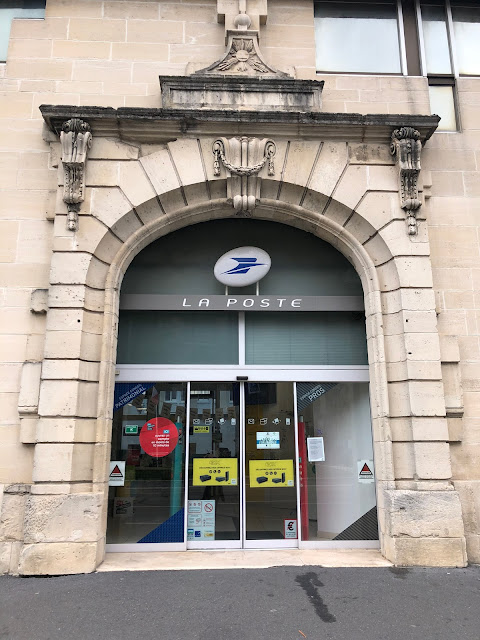 During the afternoon we got on with some serious stuff: sorting out how to vote in any upcoming UK general election.  We’ve now sent off the forms to register as voters with no fixed abode and also the forms nominating a proxy voter.

We also spent some time looking at options for routes to take to get back to Auxerre by mid-November.  We had had a brief hope earlier in the week that we could still get down to Roanne for winter.  We had received notices from VNF that the closed canals stopping us getting there were reopening.  After much toing and froing, VNF have admitted that the canals are not reopening and a ‘software problem’ had caused the incorrect notices to be sent out.  This means we will have to revert to our reserve winter mooring choice of Auxerre.

We have pretty well decided that will probably get to the end of this canal and then venture some way down the Canal entre Champagne et Bourgogne before turning around and heading back to the River Marne.  The views from the River Marne should be really pretty during September and October as the vines turn to their autumnal colours.