Runcorn (and a new stretch of canal for us) 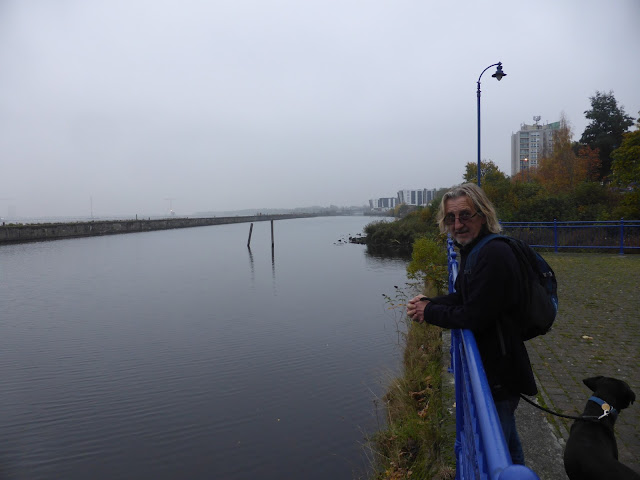 On Tuesday morning we set off for Runcorn which is on the Manchester Ship Canal, the River Mersey and the Bridgewater canal.  To join the Bridgewater canal we had to go through Dutton Stop lock at the top end of the Trent & Mersey canal.  Stop locks usually have a rise of a few inches as they were built to enable tolls to be collected when boats passed between canals and also to try and prevent water from one canal feeding the other. 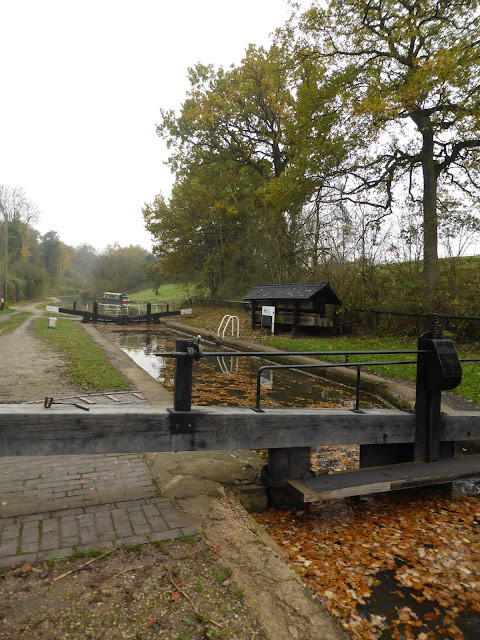 To the side of the stop lock is a dry dock and a small yard where they restore old working boats. 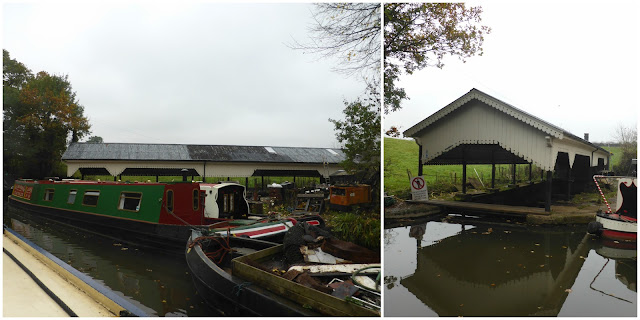 Just after the stop lock was Preston Brook tunnel and we had to wait for 20 minutes until we could make our entry. 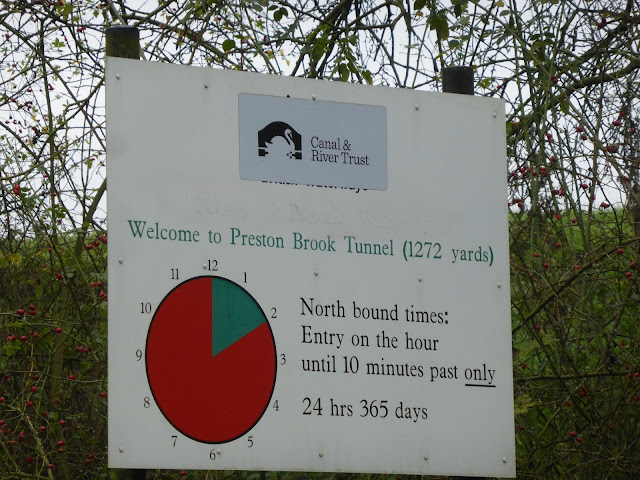 We took advantage of the wait and had a cup of coffee and started into Karen’s latest fruit cake. 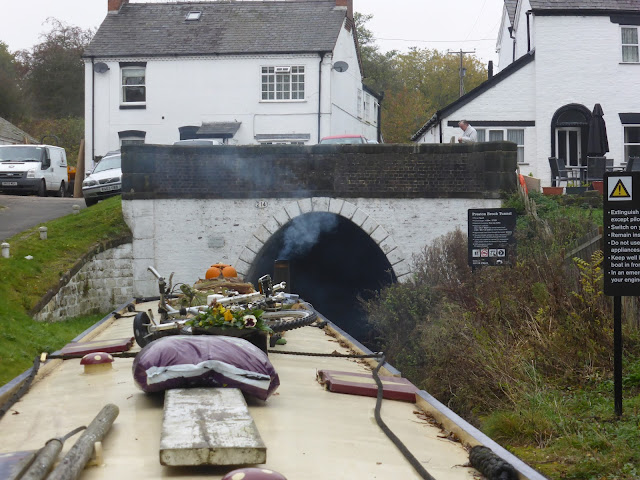 A section of the tunnel collapsed in 1981 and it took three years to repair it (compared to the two years it took to build the ¾ mile tunnel by hand in 1774/5).  This is Karen’s idea of getting a picture of the modern repairs – reinforced concrete rather than the normal brick - without distraction me from driving. 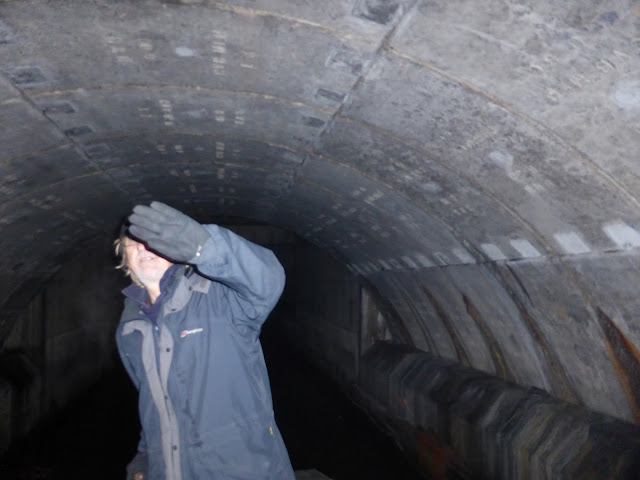 Boats were legged through the tunnel until the introduction of steam tugs in the late 1800s but several tug owners died from the fumes so air shafts were opened up.  This is the closest we got to getting a shot of one (air shaft not a dead tug owner). 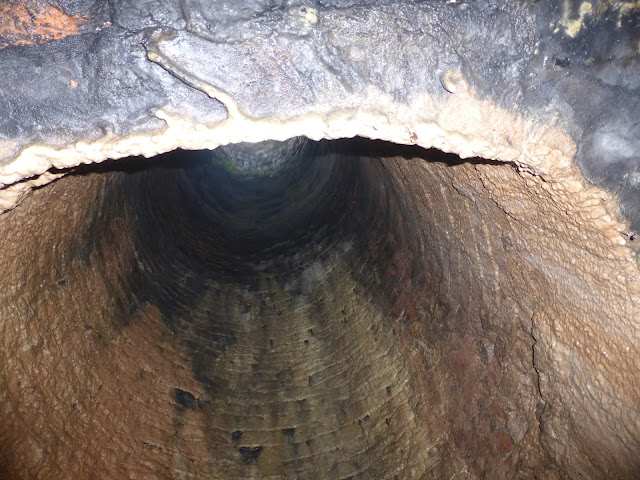 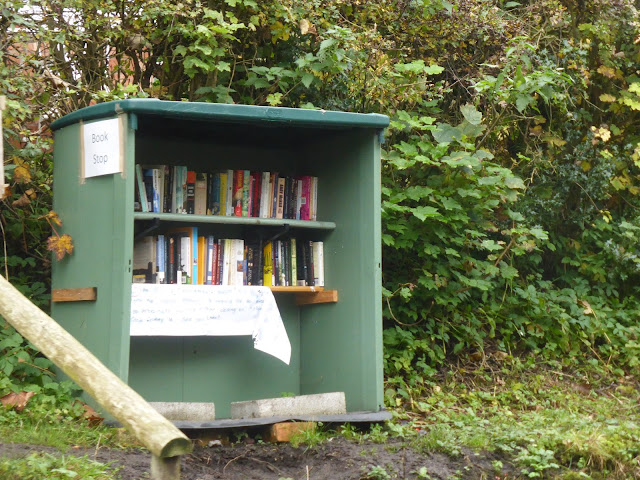 …and soon afterwards we went under the M56 and turned left onto the stretch leading to Runcorn which is a stretch we have not been on before. 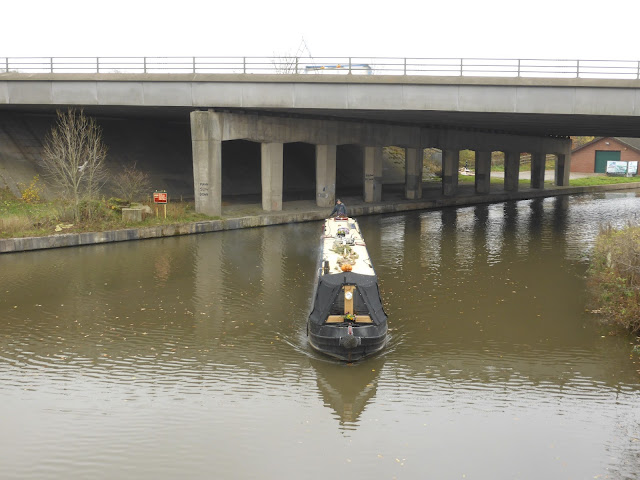 Earlier this year, when we came out of Manchester via the Bridgewater we didn’t have time to venture up to Runcorn nor even the 20 mile branch up to Wigan.  We were pleased to be cruising this new stretch and no doubt will go along the Wigan branch in the new boat when we visit Liverpool and then the Leeds & Liverpool canal.

The bridges on the Bridgewater canal have name plaques and no numbers. 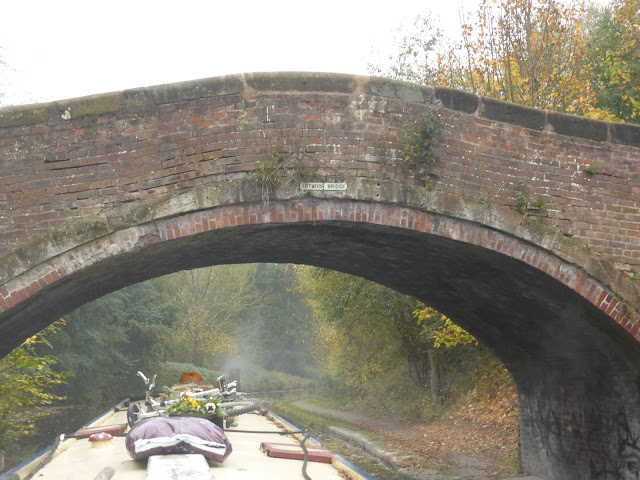 It can get confusing as we went under three bridges called Expressway Bridge. 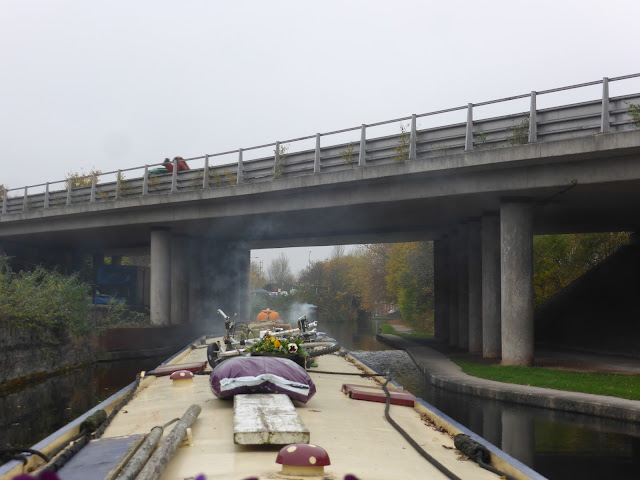 I’d forgotten that stanking plank cranes are used on this canal. 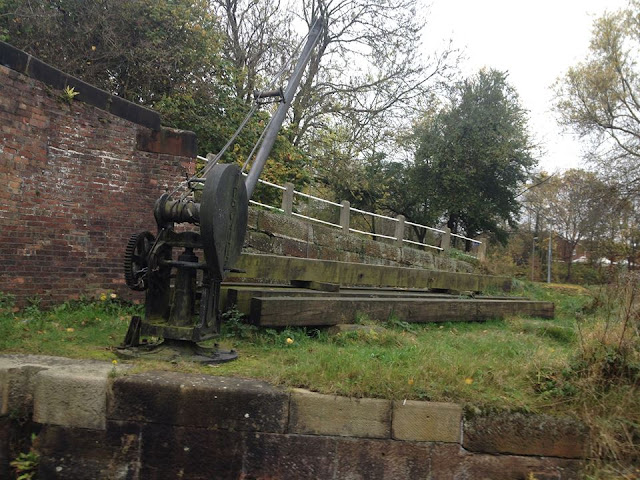 As we neared Runcorn we passed two old arms that have now been curtailed.  Sprinch arm (on the left) is now a dry dock – note the stanking plank crane holding planks in place.  The arm on the right was called the Victoria arm. 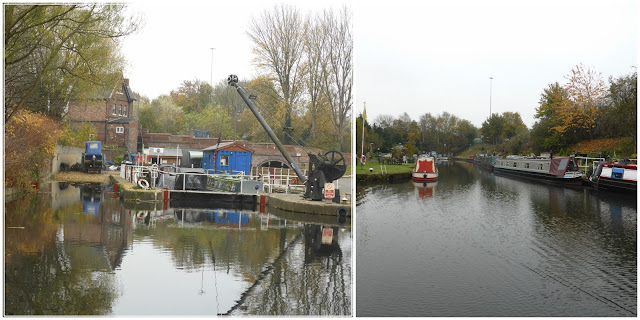 A new theatre has been built practically at the end of the canal.  It is named after James Brindley the great engineer and canal builder.  We ended up mooring here overnight as it appeared to be the only place where visitor moorings had been provided.  Such a shame as these were the only moorings we saw all day and there were plenty of pretty locations where they could be provided, 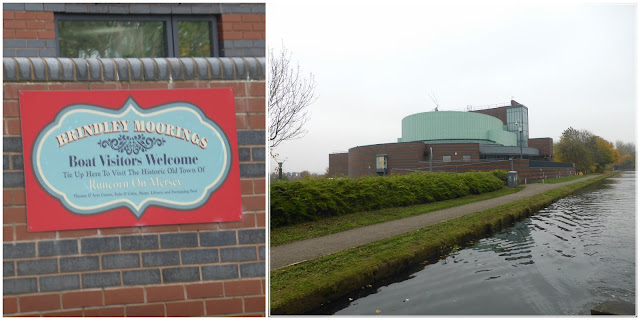 This is coming into the very end and we had to turn at Waterloo bridge.

The canal used to continue under Waterloo bridge, down nine locks, to join the Manchester Ship canal. The wiggly red bit is the path you have to follow to go under the roads which are on viaducts. 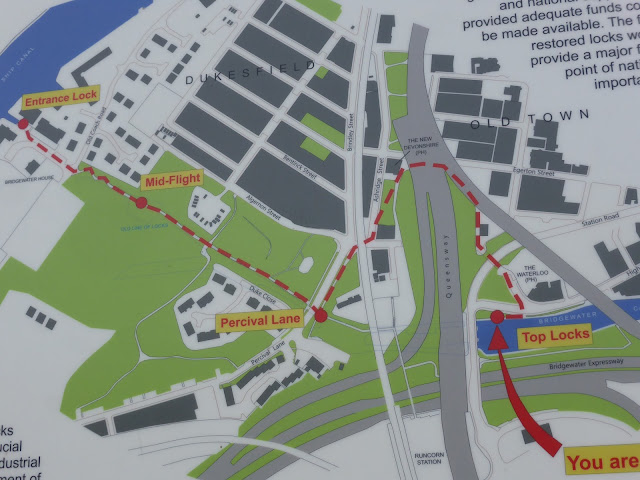 The locks were filled in during the 1960s but we followed the line down the hill. 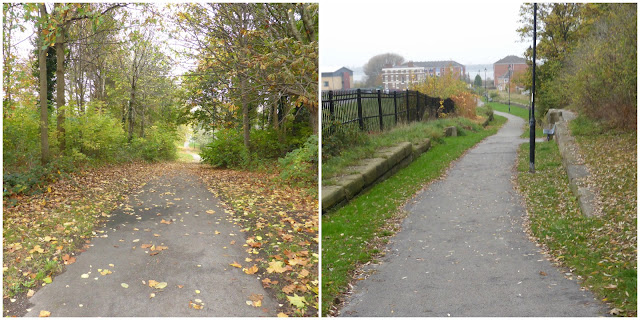 Several of the locks were still clearly marked.  The lock gate recess can be seen behind this seat. 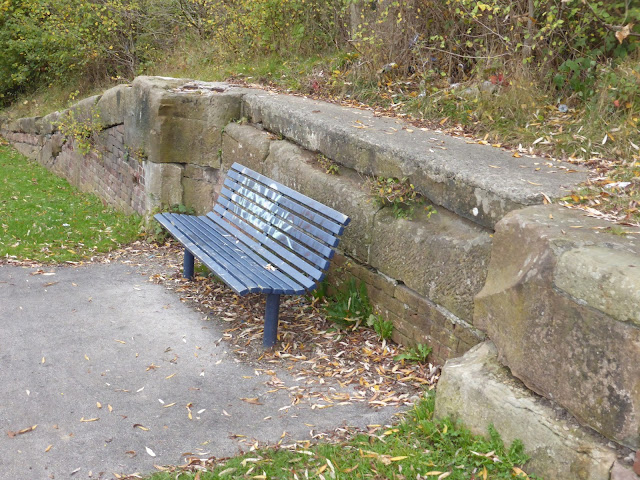 This is the bottom lock where the canal joined the Manchester Ship canal. 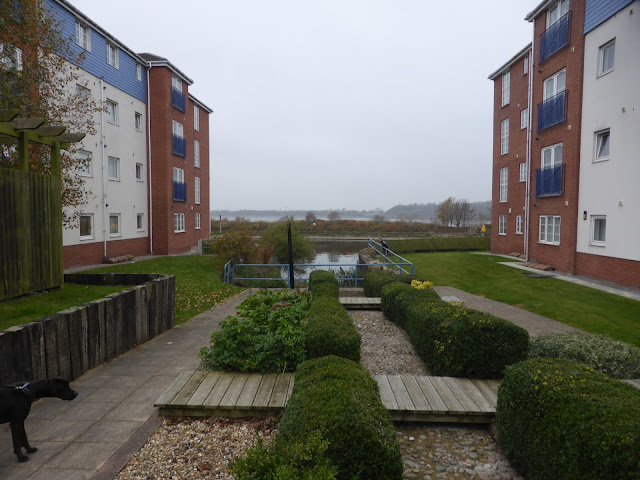 A restoration society has been formed and there are ambitious plans to reopen the flight.  When complete this will open up a stunning new canal ring.  Starting on the Trent & Mersey it will drop down the Anderton boat lift onto the River Weaver which runs down to to the Manchester Ship canal.  Not far along the Manchester Ship canal turning right will lead up the restored lock flight, along the Bridgewater to rejoin the Trent & Mersey at Preston Brook.  This would be a pleasant 30 mile cruising ring with lots of historical interest.  These old canal cottages are still standing along the line of the locks. 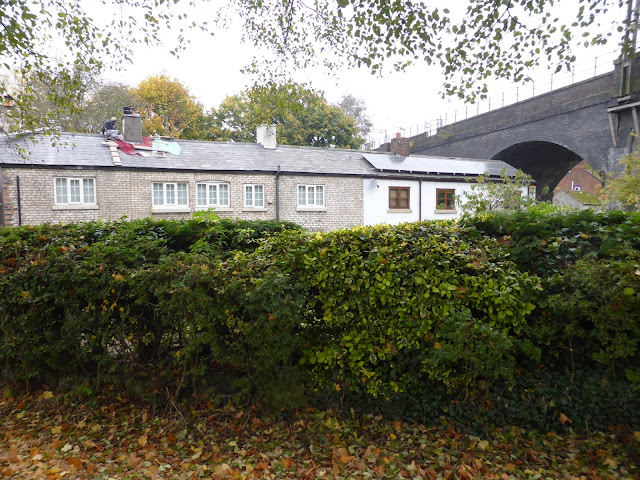 Bridgewater House stands on the old flight; it’s amazing to think that this was built as a temporary residence (in 1770) for the Duke as he oversaw the building of the section of canal to Runcorn. 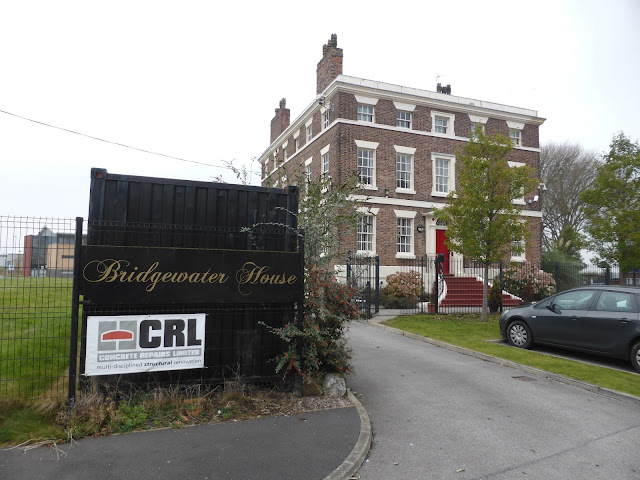 The picture at the top is taken from the Runcorn promenade – shame it was a grey day.

Just wanted to say how much we've enjoyed browsing your canal blogs!

All the best, John & Angela

Thanks both - glad it's of use to others!