Our last week in the UK was a round of goodbyes to friends we hadn’t managed to meet up with yet coupled with final farewells with the children living locally.  As all the girls like banana loaf it seemed Karen was constantly baking to keep them supplied 😉

On Tuesday we met up with John & Heather in the Butt with Tristan, one of their grandchildren.  We had planned on going for a walk after lunch but last-minute changes to plans meant they had to get up north during the afternoon.
We had got up to a dry and windless morning that day; those sort of mornings have been exceedingly few and far between this winter but there was still a slight breeze so not quite upside down picture time.

On the same morning our neighbours in Châlons, Nikki & Gorete, had sent us a picture of Chalkhill Blue from their kitchen window.  They had woken to the only snow that had fallen over winter; like the UK, it has been very mild in our part of France with very few frosts. Knowing we were leaving this week, Karen was under pressure to knit a final cardigan for Ellis. It only took her three days and was well received as Ellis had outgrown the previous one: he is now putting on weight constantly and now weighs nine pounds.  Having been born at 30 weeks he and his parents have done well to get him to put on six pounds by a week after his due date.

Polly & Lochlann came over to see us on Wednesday and on Thursday we went up to London to see Jo who is absolutely delighted to have got work experience at a couple of Saville Row tailors.

As we were handing the boat back to Ken & Annie at the weekend, we had to fill her up with fuel and water, replace a gas bottle we had used up and give her a final pump out.  We had planned on doing all this in Frouds Bridge marina and leaving her there.  Unfortunately, with the rivers still on red boards it wasn’t possible to get into the marina, so we had a final cruise down to the wharf at Aldermaston to do these jobs.

With yet another storm forecast to hit on Saturday we decided to do all this on the Friday.  As it turned out, the weather was worse on Friday than the Saturday so I’m not sure what happened to the weather forecast.

With a break in the middle of the day to pop over to Pamber Heath for a physio appointment it ended up taking nearly all day to do our jobs.  It was then a matter of cleaning the boat and packing all our gear into the car ready for going back to France.  As I said above, contrary to expectations, it turned out to be a beautiful day on Saturday and we had a couple of good walks and then spent the evening next door on Steve & Tina’s boat.

Sunday was our last day in the country and therefore our last day for VR boxing.  We were popping in to see Pete & Val on our way down to spend the night in Canterbury before doing the crossing on Monday morning.  Pete & Val live near our house in Mereworth and we couldn’t believe it had been over a year since we had last been down there to see them.  We searched out boxes in the local area and found a few including this rather sad out of use box spotted by Karen: 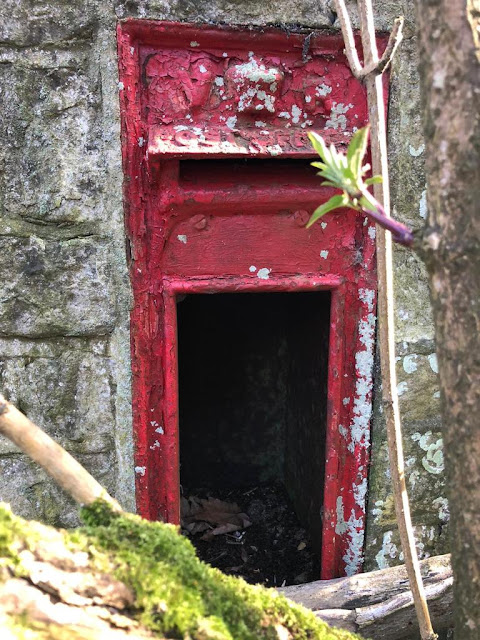 We also visited Pillarbox Lane which is outside Oxonhoath, the house where we were married ten years ago.  The box on the lane was Victorian but, unlike the name of the lane, was a wall box not a pillar box.  It was the same conundrum as the wall box we had seen on Pillarbox Lane in Sevenoaks last year.

We spent Sunday night with Trevor & Brigitte in Canterbury.  Their three boys and other halves were staying for the weekend, so we had a good chance to catch up with them all and partake in Brigitte’s wonderful cooking.

We were up early on Monday and were back in France by nine o’clock.  The weather was no different to that we have been having over the last couple of months and it rained most of the way back to the boat.   The journey was uneventful other than getting through customs.  We have a 1980s ski box on the car which is very handy for two reasons: it holds a lot of baggage and, as no one else has one, it makes our car easy to spot in car parks.  Being so old it is now on its last legs and it really felt, when we locked it up before leaving, that it really wouldn’t suffer another opening and closing before it finally breaks.

We were pulled over by the customs officers in Folkestone and our hearts were in our mouths as we were asked to leave the car – we knew it would be a proper search and they wouldn’t ignore the ski box.  We were very lucky and managed to get it relocked without too much hassle, but it confirmed it wasn’t going to last much longer.

It took until Tuesday before the car was unloaded and the boat was back to normal.  We had never left the boat for more than a couple of weeks before, so we weren’t sure what it was going to be like leaving her for three months.  The girls next door had been very kind in checking it out every month, replacing the dehumidifier crystals and doing other regular checks.

A few things weren’t quite right.  First, the gas flow was extremely weak so, hoping it was just the regulator that needed clearing, I set about removing it and cleaning it out.  When I put it back it made no difference, so I tried the spare one we carry.  The gas flowed perfectly so that was one job done successfully.  Checking out the engine bay I noticed the bilge was full of water so clearly the automatic bilge pump wasn’t working.  It has a sensor on the side where a button is pressed to set it going manually.  This didn’t work either, so I began to worry as I had only replaced the pump a year ago.  While sitting on the engine working out what to do next, the pump started and cleared the bilge.  I suspect a wire may be slightly damaged and having got damp had broken the circuit.  With me moving around in the engine bay I may have knocked the wire thus completing the circuit.

Another problem was that the chimney had been leaking inside and there was a nasty, sooty, rusty mess around the stove.  Nikki told me it had only been like it over the last couple of weeks; they hadn’t had the wind and rain of the UK until about three weeks ago.  I found part of the inside skin of the chimney pot had rusted away and was letting in water.  I took the chimney pot off and replaced it with an upturned yogurt pot topped with an upturned plant pot to stop it blowing away.  We’ll have to buy a replacement next time we’re in the UK.

In the midst of doing our jobs we had a break and took Buddy on our favourite circular walk.  Sadly, the Marne was running high and after a while we found our way impassable so had to turn around.

It wasn’t just me who had had problems, Karen went food shopping and had an embarrassing time at the check out when she found her Apple Pay wasn’t working.  After trying three euro cards linked to the account she had to give up as she didn’t have enough cash and didn’t have any physical cards with her.  It was rather strange as she had used Apple Pay earlier in the day when picking up a couple of things in town.  By the time we settled down to relax on Monday evening all the neighbours had welcomed us back and we felt we were home again.  We knew it would still take time to get things sorted before we began cruising but it was good to relax at last.

Tuesday was more of the same, but we went on a different walk.  We took in a stretch of the Marne again and were amazed to see that it was so high that the weir in the town was completely under water.

We spent a pleasant couple of hours in the evening having drinks with the girls on their boat catching up with all the gossip.  One of the things we are slowly coming to terms with is that things are going to be quite different for non-European boaters from next year.  We know that we are going to have to do some serious investigation to find out how we can cruise in Europe for more than three months a year after the UK leaves at the end of this year.  No doubt there will be more on this in future blog updates.

Two more things before I finish this update.  Firstly, the bridge plaque at the top of this entry.  While we were away, Nikki had got into programming a carving tool and had very kindly made us the Châlons bridge plaque.  We had told her previously that we were upset that bridge plaques for the French waterways weren’t available, so she had made this one up to join our collection of all the UK rivers and canals we have been on 😊 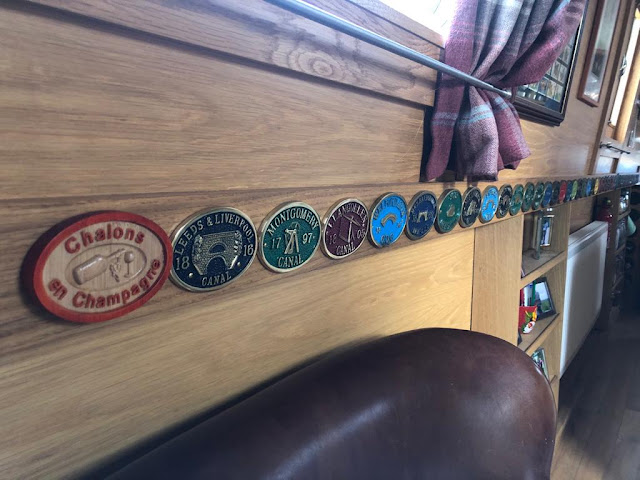 The last point is to mention stanking planks that seem to have been off the agenda for a while.  I have recounted before how we call them stanking planks while our friend Mike insists on calling them stop planks.  We accept that different terms are used in different parts of the country and were rather pleased to receive this email from Mike:

“On Sunday, like Chris & Sue the day before, we ventured over to Foxton to view the lower staircase from the bottom of lock 13.  It was a similar arrangement to the viewing we did with you at Stoke Bruerne a couple of years ago, but obviously narrower!

We got talking to the Lockkeeper ('Alex') there about the closure and he made frequent references to stop planks and he was particularly proud of the new shelter that had been built for them at the top lock.  On asking if he knew what a stanking plank was, he claimed to know exactly what they were.  Whilst explaining that there may be some regional differences, as far as he and his father before him were concerned, stanking planks perform a similar role to stop planks in holding back water.  However, their purpose is to keep a work area dry within a larger drained area (where there is always some leakage) and form a barrier around a foot or 18 inches high.  If required, a small pump can then keep the work area dry.

Another take on stanking planks then! 😊”