We had arranged to go down the final lock on the Canal du Centre at nine on Sunday morning and they had obviously understood my request because, as we approached, the lights were on red and green indicating that the lock was being prepared.  By the time we reached the lock the gates were opening, and the lights were both green, so we went straight in.

The lock had an 11-metre fall so was the deepest we have ever been in, almost twice as deep as the deepest in the UK.  Fortunately, it had floating bollards as even our longest ropes wouldn’t have been long enough to reach up to a lockside bollard and back to the boat again.

The gate at the bottom was a guillotine so lifted up once the lock was empty and off we went to join the River Saône.  I saw a train crossing the canal in the distance and suddenly realised it was going slowly and was actually a large commercial boat on the river passing the end of the canal.  I must admit I was rather glad we weren’t a few minutes earlier.

By mid-morning the wind got up and, sure enough the clouds started rolling away, but we found it quite chilly on the back of the boat.  The river was very exposed and the wind so strong that we had to layer up.

Whilst on symbols, this is a flood level indicator: 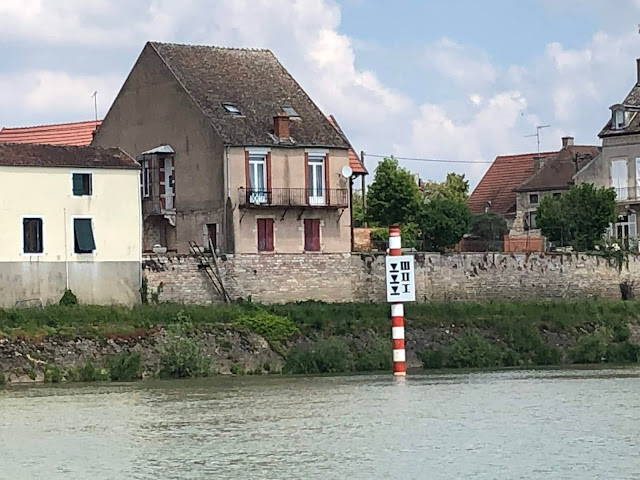 We don’t really like being on rivers and wouldn’t have ventured on the Saône if it had been any higher.  To be honest we find the flood level indicators scary as the river wouldn’t be closed until the water reaches level II (or III on the Moselle).

At Écuelles we came to our first lock where we were going to have to use stepped bollards.  This was also a bit scary too (you can tell we don’t really like rivers) as each set of step bollards are spaced too far apart for us to use lines at both ends of the boat.  This meant Karen would have to keep the front secured by her lines and I would keep the boat in gear pushed against the side at the back.

As we rose up the lock Karen had to put a new line over the next higher bollard and remove the line from the lower one and so on.  It was uncomfortable doing this the first time as Karen couldn’t get her line on until the third attempt after reversing back and coming forwards again.  Anyway, she kept her cool and didn’t panic and when she got it on there was loud applause from Germans on a plastic boat who were sharing the lock with us.

Looking at the picture above, we were next to the 80-metre point which meant there were over 100 metres in front of us.

The locks on this river take commercial boats that are 185 metres long and that means they could fit 60 narrowboats our size!  Imagine the stanking planks required to stop the water in order to do lock maintenance.

One thing we found during the day was that European bee-eaters seemed to be more plentiful than swallows on the river.  These are delightful birds; their shape in flight is quite distinctive and their plumage gives the kingfisher a good run for its money.  Up until 40 years ago, in France, these migratory birds could only be found along the Med; nowadays they can be found as far inland as we are and even farther north.

The kilometre posts were confirming we were travelling at 6kph which is the speed we expected as we were travelling upstream and after 36 kilometres we decided to moor up for the day at Seurre.  An old cut leads off the river making for very pleasant moorings in the centre of town.  Reversing onto the 10-metre pontoon was fun in the wind but we made it without any mishaps.

After mooring up we found the captainerie and coughed up our €18 to moor for the night.  At that price we’ll make sure we top up with water before we leave on Monday of course 😉

We then had a walk around town which, as it was Sunday, was completely shut but meant Buddy could stretch his legs a bit.  It must have been a long day for him cooped up on the back of the boat.  To make matters worse he hates floating pontoons and wasn’t happy when we sat outside having a drink.  In the end we went over to the new-looking riverside steps you can see above and sat there for a while so he could relax.

As I mentioned above, we covered 36 kilometres during the day and also went through two locks.