Having stayed at the lock landing in Celles-sur-Aisne for a couple of nights we set off for Soissons at nine on Monday morning.  After making sure there wasn’t a commercial coming our way, to which we would have to give precedence, we set the double staircase lock using our télécommande.  This was the first time we have been in an automatic staircase lock so were a little nervous about the operation.  We needn’t have worried as we were soon exiting the top chamber and going into the bottom one having had no issues.

It was then that things started going wrong; we couldn’t get the gates to close behind us and used all the tricks like lifting and holding the control bar for a full minute before dropping it.  To make matters worse we could see a commercial had pulled up below the lock and was waiting for us to exit.

Due to contradictory notices at the locks we have been through on this canal we had the choice of radioing for help on either channel 20 or 22.  I tried both twice with no response, so we resorted to making a phone call.  As we enter each waterway Karen takes a photograph of the emergency number, so she went inside to get her phone to find the picture and also the French phone that we use for these occasions.

While she was getting these, I called the waiting commercial on channel 10 (the ship to ship channel) and explained that the gates wouldn’t close, and I was calling the control centre.  I got an immediate answer when I rang the control centre and was told an éclusier itinérant would be out straight away.  Within five minutes two guys arrived in a van, popped into the control tower and the gates started closing.


If you look next to the life ring in the picture above, you will see a water level gauge and a rather crude record of the level attained in the disastrous floods in the Aisne-Marne area in 1993.  If you look at the next picture it’s hard to imagine what the water level was like as it would have been well over the top of the gates.

We think the guy in the commercial appreciated us radioing him as he came out of his cabin as we went past, waving and smiling and when I apologized he said ‘C’est pas grave’, so we felt a lot better.

Having come out of that double lock we were now on the River Aisne, which is our sixth river in France and, as with all the others is spelt with just five letters and ends in an ‘e’.  In fact, all of them, except the Loire, have ended in ‘ne’.  The river has quite a different character to others we have been on; with tall trees either side and not particularly wide.

Saying that the panic was over was true with regard to the lock, but I still had a concern that we wouldn’t find anywhere to moor in Soissons.  It was the point we need to turn around and head back to Reims for the football match this coming weekend and we hoped to pick up water there as there was nowhere else, other than perhaps at one lock, to get any until we are the other side of Reims.

I was concerned because Karen had been chatting with a guy we know, Philippe, a couple of weeks ago and he told her he had been to Soissons recently and it was full of boats.  I resolved not to worry too much as Karen kept reminding me that we have seen so few boats this year that we would be bound to find a space.

We saw plenty of boats on the move, but they were all commercials and no pleasure boats.  At one set of grain silos, one boat was nearly full of grain… 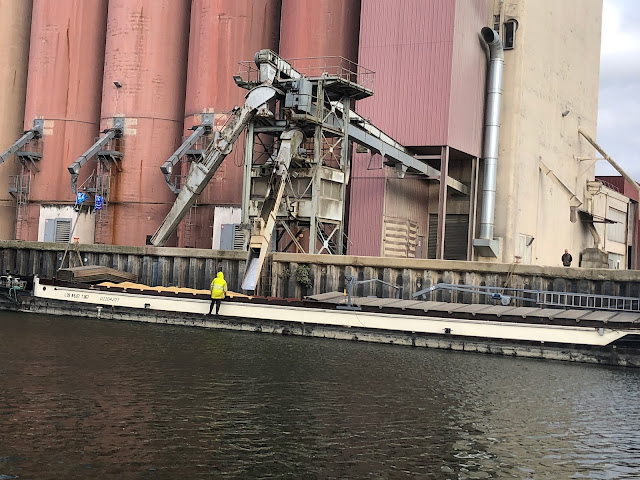 …with two more waiting to fill up afterwards: 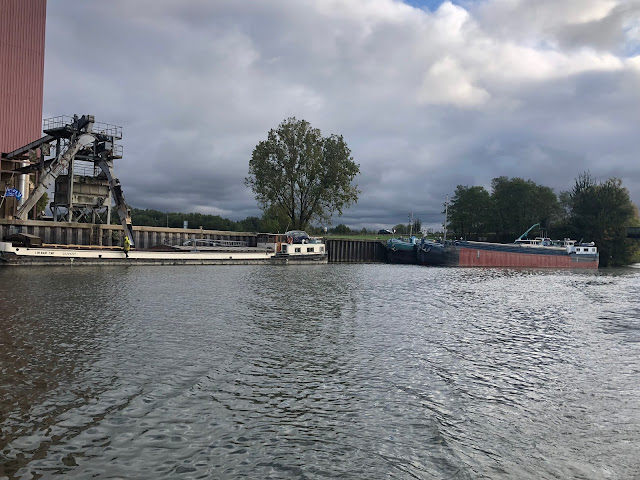 I have to admit that there was one other thing concerning me about the journey to Soissons.  According to the waterway guide there were three points where boats have to travel on the left rather than on the right.  We’ve come across these before and haven’t worried about it, but this river was so busy with the large boats and not particularly wide that I hoped I got things right.

I know in the grand scheme of things we are a narrowboat and can quite easily get close to the bank if we get something wrong but that doesn’t stop us wanting to do things the right way.  As it turned out it worked out fine and we only encountered one commercial crossing to the opposite side as we did the same in the opposite direction.  We must have done it at the right point as waves were exchanged as we passed, albeit feeling rather strange as we waved to the right rather than the left.

After three hours cruising we were heading into Soissons which is the last place we stayed on our two-month road trip last year.  We had camped our way around France and Italy but for our last night before returning to the UK had stayed in an AirBnb in Soissons.  Looking back at the blog entry we realised that it was exactly one year ago, and we had also noted that there were no boats on the moorings 😊

As we got near the area where bollards are provided for boats, we could quickly see that there wasn’t a single boat there so we had the pick of spots.

We took a while to moor up because the bollards weren’t conveniently spaced for us and while Karen & Buddy went for a run, I checked out the services.  It turned out that the water and electricity were free, so I got some washing on and filled up with water.

As it was Monday, we did the weekly food shop later in the afternoon.

During Monday we cruised 16 kilometres down three locks.

Tuesday was meant to be sunny all day with temperatures back in the 20s, so we had planned on a long cruise to Cys-la-Commune where there looked to be some good walks.  Instead we awoke to this:

We don’t have radar; therefore, we aren’t allowed to travel in fog so we went for a walk during the morning instead.  We did the sightseeing bit around Soissons when we were here last year so won’t repeat any of the sights.  You can click here to see our report of the visit to Soissons in 2018.

The fog started to lift while we were having lunch and, although the sun never made it through, it was clear enough to start travelling.  We set off for Cys-en-Commune but ended up mooring just above the double staircase lock at Celles-sur-Aisne again.  We were only one lock and six kilometres short of Cys-en-Commune and will easily do that in the morning so we can still go exploring.

The only thing of note for the afternoon (to us) was that we completed our 600th lock since being in France this year.  That’s 600 locks without having to use a windlass to drop or wind up paddles.  Also, all the manual locks we went through were operated by éclusiers, so it also means we haven’t had to open or close any gates.  There were a few where we assisted but as we are in a narrowboat only one gate needed to be opened so an extra pair of hands were a bit superfluous.  It’s going to be a bit of a shock having to do our own locks when we are back in the UK later this winter living on a borrowed narrowboat for a couple of months.

During Tuesday we cruised 16 kilometres up three locks.