Loivre (and the disappearing lavoir)

On Tuesday we wanted to move away from the industrial quay by the wharves outside Reims and get back into the countryside.  There was less chance of rain in the afternoon, so we decided to leave the cruising until after lunch and go for a walk in the morning instead.  There seems to be an unwritten rule that if it starts raining when out for a walk it will be at its heaviest the farthest away from the start point of the walk.  That was what happened to us, so we were glad we had our wet weather gear.

The rain had stopped by the time we were back on board and remained dry during lunch, so we set off immediately afterwards.  Even though it wasn’t raining it was a pretty dismal day and this picture really sums up the afternoon cruise: 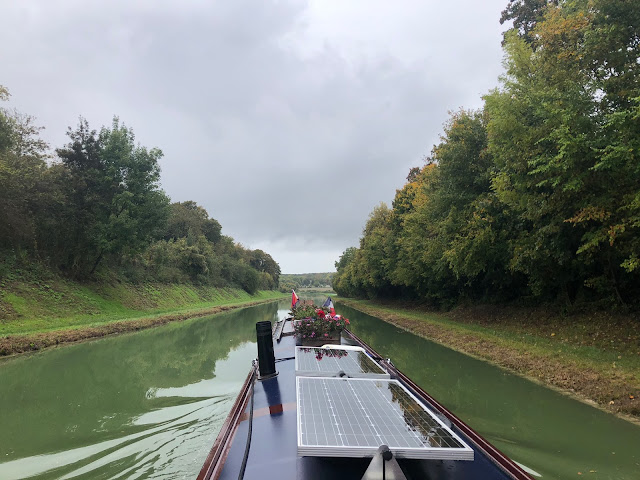 We have nine more locks before we reach the end of this canal and thought we would moor for the night at Courcy which is just before the first of the locks.  As luck would have it, the rain started just as we were mooring up at some bollards thoughtfully provided by the village.

Being a commercial canal there are very few places for pleasure boats to moor safely so you just have to hope there is room on the moorings and take them when you see them.  We had no choice but to moor under a type of sycamore tree that was already in its autumn colours. This also meant the leaves would be dropping so no doubt our nice clean roof will be covered by the morning.

Although it brightened up during the late afternoon, we spent the rest of the day on board catching up on admin and other odd jobs.

As far as continuing our exploration of France our next date is on 26th October when we have to be back at Reims as we have bought tickets to see them play Nimes.  Before then we want to get as far as Soissons providing the weather is kind.  This means getting to the end of this canal, turning left onto the Canal latéral à l’Aisne then joining the River Aisne before reaching Soissons.

After we’ve been back to Reims, we will probably take it slowly down to our winter mooring at Châlons-en-Champagne as our next date is to be back in the UK from December to February.  We will be doing a bit of a tour of the country for the first couple of weeks followed by staying in the house in Hampshire we rent every Christmas & New Year and then two months living on a borrowed narrowboat on the Kennet & Avon.  As can be seen we are now a fair way north of Paris (on the left) and up in the north eastern corner of France.


The black line on the map below shows where we have cruised so far in France, the blue lines show canals and the red, rivers.

On Tuesday we cruised a lockless seven kilometres.

As expected, the rain started when we got up on Wednesday morning so Karen delayed her morning run as it looked like it wouldn’t last.  While we waited for the rain to stop four commercials came through reminding us that we really are on a commercial route.

True to the forecast, the rain didn’t last, and Karen & Buddy set off about ten o’clock.  Also, as we expected, the roof was covered in leaves that had fallen or been blown down overnight giving me something to do whilst I waited for them to return 😉

While they were out, the wind started getting up and was really quite strong by the time we set off for a short cruise.  We were on the ‘wrong’ side of the cut and were being blown against the side therefore making it very difficult to get away.  The only option was to reverse back along the cut until the back was well out into the water and then Karen would push the front out with the barge pole.  Every time I thought the back was out far enough, I would start going forwards only to end up still being blown against the side.  In the end we had to reverse about 100 metres before we could get away.

We had four locks in a chain to go down before getting to the next mooring.  Being in a chain meant that we set the top lock going by twisting a pole over the cut and then the following three set themselves automatically as we left the previous one.

It seemed that every lock we approached had a commercial already coming up meaning we had to wait for them to leave before we could go in.  Normally we would wait on the right-hand side but with the hassle we had getting off earlier we pointed the front into the left bank and then moved off at the last possible moment while the other boat was coming out of the lock.

The original information plates on the four lock cottages in the chain were quite grand compared with the size of the cottages themselves.  For some reason the cottages and plates were both different styles to those on the previous 15 locks we have been through on this canal. 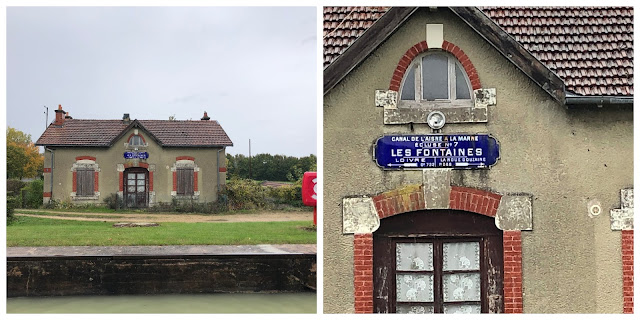 Karen took Buddy and walked along the towpath while I was going down the locks as she had seen a good walnut tree when out on her run.  We had agreed that we had harvested enough walnuts, but these were enormous, the largest we had seen, so she couldn’t resist collecting a large bagful.

During the day we passed eleven commercials but no other boats.  It did feel like it was very busy, a bit like being back on the River Seine.  It was also quite a change to be cruising through countryside that wasn’t covered in vineyards.

There was no one on the mooring bollards at the bottom of the chain so we moored up for the day.  While we were mooring a VNF van stopped and a really jolly éclusier asked if we were OK or needed a hand to moor as it was windy.  We thanked him but said no as we were just about done and off he went.

After lunch we went for our obligatory walk around the village and actually found a Rue du Lavoir but, like Cumières, the lavoir was nowhere to be seen, presumably demolished.  The church had an interesting looking porch and the roof looked relatively new and we wondered if it had been damaged in one of the wars.

We noticed the roof of the mairie was very similar: 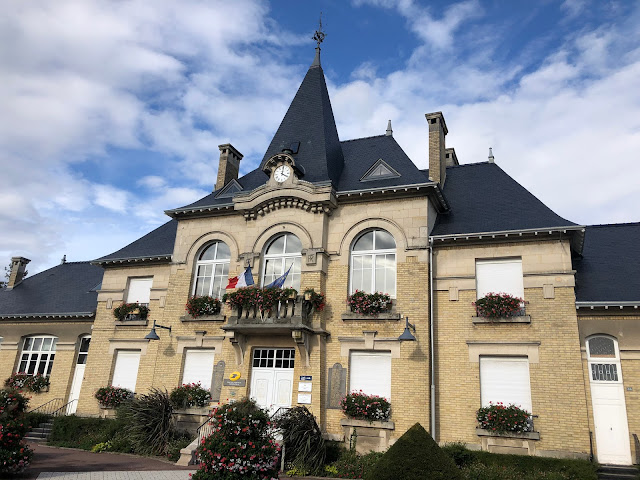 Outside the mairie was a photograph of how it looked before WWI and comparing the before and after differences rather supported our view that the church had suffered war damage.

On Wednesday we cruised three kilometres down four locks.
Email ThisBlogThis!Share to TwitterShare to FacebookShare to Pinterest