With the cricket to listen to on Sunday afternoon (remember we’re an hour ahead over here) we didn’t move as we wanted to be sure of a signal.  We also wanted to walk up to Hautvillers, the village which is meant to be Champagne’s prettiest.

To make sure we avoided the heat of the day, and also to make sure we were back by noon, we set off soon after nine.  We wouldn’t say that the village was overly pretty, especially as the public garden spaces didn’t look as well tended as many we have seen elsewhere.  Of course, there was no sign of deriliction as it was full of wealthy champagne houses.

Other than being the burial place of Dom Pérignon, and a ‘pretty’ village it is said to have 140 wrought iron signs hanging outside the houses.  These signs depict (or at least depicted) the trade of the family who occupied the dwelling.  As you would expect, the majority of the trades related to champagne production, either directly such as picking, pressing, bottling etc. or indirectly in a supporting trade like bottle or basket making.

We couldn't find anything like 140 signs and many of the ones we did see were difficult to photograph as they were either in full sun or deep shadow!

There was an abbey at the top of the village dating from the year 650 although it was destroyed and rebuilt several times during its life.  The abbey is where Dom Pérignon, the master of champagne, is buried.  He was born in 1639 and lived in Hautvillers most of his life.

Dom Pérignon is Moet & Chandon’s premier champagne brand and several of the vineyards we passed during the day belonged to them. 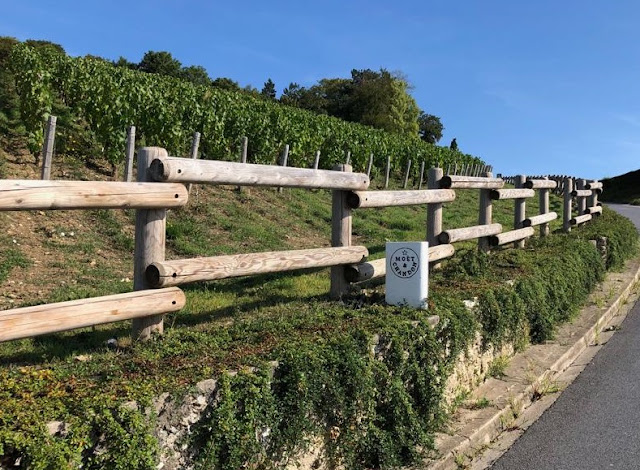 We also had some marvellous views over the Marne valley during our walk.

Looking the other way, we could see Épernay in the distance.  We will be cruising up there on Monday as we need to do a big food shop get fuel.

Épernay marks the end of the navigable River Marne and once we have been there we need to turn around and return to the sharp turn in the picture above where we will take the Canal latéral à la Marne that you can see heading off in a straight line to the left.

We have noticed in many vineyards in the UK, France and Italy that roses are often grown at the end of the lines of vines.  They were originally grown to act as an early warning system for a fungal infection that would attack roses before the vines.  Nowadays, more sophisticated methods are used to detect infections and the roses are probably now grown to attract the tourists.

All along the bank of the river from our mooring up to the centre of Cumières are a series of informative metallic statues illustrating champagne production.  Against each display is a board describing the depicted process.

We didn’t see many butterflies during the day but did have a beautiful clouded yellow making itself at home around the boat.  Oh, and we got home in time to hear the day’s play.

We had such a mix of emotions during the afternoon while listening to the cricket.  To make it worse we needed to go for a swim to cool down and couldn’t believe how long we ended up having to wait.

While swimming Karen made a comment that summed up my atrocious swimming ability.  She said that it takes her 19 strokes to swim the length of the boat against the current and seven to swim back.  I reckon it takes me about 150 strokes to swim a boat length!


Monday was moving day and we were off to Épernay to do some shopping.  We didn't think we would stop there long, a night at the most, as we visited the town last year and thought it was the Las Vegas of the Champagne region.  As we set off, we realised that we hadn’t seen any pleasure boats on the move since before the weekend which was rather surprising considering we are in the height of the holiday season.

We had seen the trip boat, Champagne Vallée passing our mooring a few times a day though, as it took its punters on a 1 ½ hour cruise down and up the Marne.  At least passing a narrowboat gave the tour guide something different to talk about through the loudspeakers each time they passed.

It was only about seven kilometres to Épernay and soon after setting off we passed the junction with the Canal latéral à la Marne.

We carried on along the river and started recognising where we had walked when we camped here during the vendange last year.

In three weeks that bank side will be thronged with grape pickers relaxing after a hard day in the vineyards.  The river runs through downtown Épernay, so the town isn’t seen at its best from the river.  We weren’t too bothered as we knew we could moor right alongside a large Carrefour.  As we moored up, we independently decided that we wouldn’t really want to stay there overnight so agreed that after lunch we would turn around and start making our way up the canal.

I made three trips to get 100 litres of diesel which happened to be at one of the cheapest prices we have seen it since being over here – €1.393 a litre.

When it’s hot we can’t leave Buddy on the boat on his own which means we can’t go food shopping together.  It’s not a done thing in France to leave medium to large sized dogs tied up outside large supermarkets either. To be honest Karen prefers doing the food shopping on her own as long as I’m around to help carry stuff when she has finished 😉.  On the odd occasion I'm allowed to join her I'm sent off to find things that are either at the other end of the store or just don't exist!

After Karen came back from Carrefour we got ready to set off again, leaving lunch until we moored up for the day which should only be an hour at the most.  Suddenly, Karen exclaimed, 'My cucumber!'.   She had left it in her trolley (I prefer the French chariot) so off she went to the trolley park to retrieve it.  Fortunately no one else had left a trolley after hers (it was the farthest park from the store as it was by the river) so she didn't have to faff around inserting and retrieving euros in a line of trolleys!

When she returned with her cucumber, we set off again and with only a few kilometres to go before getting back to the junction we were soon going into our first canal lock for what felt like ages.

There are 15 locks on this canal which runs for 67 kilometres down to Virty-le-Francois.  The locks are all boater operated through a series of rods and poles.  The locks are smaller than we’ve been used to of late and can accommodate boats up to 39 metres long and five metres wide.

Karen twisted the pole in an anti-clockwise direction which started the lock emptying and it wasn’t long before the gates were opening, and the lights turned green indicating we could go in.  Once in the lock we moored up and pushed up a blue metal rod on the lock side.  The gates closed and the lock started filling.  It was quite feisty compared with the river locks that we had become accustomed to but we managed to keep control and made a mental note to be more aware on the upcoming locks.

I mentioned in the last blog entry that Mike had explained to us how we can work out which side of locks the controls are on and hence which side to take the boat in.  His advice had been fine on the river locks but on this lock the controls were on the opposite side to the side indicated by the guidebook.  Maybe he forgot to mention that his theory doesn’t apply to canals, just rivers 😉

Even with the sunshades up it was getting too hot to cruise comfortably so we looked for some shade where we could moor for the rest of the day.  We had forgotten the big advantage of canals is that you can moor practically wherever you like provided you can make yourself safe from the wake of passing boats.

Later in the afternoon we went for a stroll along the towpath but only managed a couple of miles before coming back.  At least Buddy had had a good run in the morning with Karen, so we didn’t feel guilty for not walking any further.

On Monday we cruised ten kilometres up one lock.