The weather on Thursday was forecast to be 29 but overcast, thus ideal for cruising without the heat of the sun.  We pottered around Arsenal and the boat until Matthew left just before lunch and arranged to leave the Arsenal at 1.30.  We were heading up the rest of the Canal St Martin and then onto the Canal de l’Ourcq through the eastern suburbs and beyond.

We had to cruise down to the other end of the Arsenal basin, away from the Seine, and through some tunnels under the areas called Bastille and République.  The tunnels, even though wide, are operated as one-way because of the larger passenger trip boats and the odd commercial that use them.

It’s amazing that the low wide span of the stone roofs hold up but they seemed OK as we went through.  The tunnels were brightly lit as is usually the French way and it was strange having our shadow travelling with us

There was a double staircase lock at the far end, and we were immediately reminded of the Rochdale Nine: the nine locks that run under many commercial buildings in the centre of Manchester.  We also had nine locks to go up.

One immediate differentiator from the Rochdale Nine was that all the locks were gated and fenced off from the public.  With the tourists watching from afar and on the footbridges, we rather felt like zoo animals.

With the feisty locks and so many onlookers we were on our best lock ascending performance to make sure we didn’t lose control or move about.  The stretches between the locks reminded us more of Camden than Manchester with all the cafes and bars and people sitting on the sides dangling their feet in the water.

At one of the locks we had to complete some paperwork to explain where we were headed and also to be given a key.  The locks further up the Ourcq are operated by the boater as so few boats use the canal it doesn’t pay to have lock keepers.  The key seemed enormous, but I suppose there’s less chance of losing it.

Going into the final lock felt more like the Rochdale flight, with the long road tunnel and a tram passing overhead.

After the final lock we found ourselves in a large basin called la Villette which was open to the public on both sides with plenty of water sports, shops and bars, more reminiscent of travelling through Birmingham.

The signboard lists places on the Parisian canals, their distances and approximate travelling time.  Providing we have time we will travel to the farthest extreme, Port aux Perches, 108 km away.  I say have time as, once again, we have a time constraint; we are going back to the UK at the beginning of August for our annual family camping trip to Gordale Scar in the Yorkshire Dales.  Yes, I know we have known about this for ages, but Karen has just found out that our car MoT expires at the back end of July, so this means we now have to go back a little earlier than planned.

Although it was a cloudy day it was very warm and muggy, and we passed several crowded makeshift lidos in the side of the canal full of people cooling down.

At the far end of the basin is a footbridge (or passerelle) that lifts up as boats approach.  We don’t quite understand the design as there is also an up and over footbridge above it.

Just after the passerelle is the junction with the Canal St Denis which heads west down to join the Seine at the far side of Paris.  We were now at the end of the Canal St Martin and joining the Canal de l’Ourcq which we shall be on for the next week or so.

The first 11 km of the Ourcq is wide and still used by commercials of which we only saw a couple.  What we did come across were countless motorboats with families and groups of youngsters enjoying an hour or two on the water with picnics etc.  At times they became a bit annoying as they would travel without looking and suddenly cross our path.  Several times Karen had to go to the front to warn them to keep out of our way.

The Ourcq was built as a water supply for Paris and, apart from the widened first 11km, is narrow gauged and consequently not accessible for most pleasure boats cruising the French waterways.  The locks are also the narrowest in France, some down to just over three metres wide which is another reason many boats cannot use it.

A few times the canal was cordoned off for water sports for the local children and the organisers would have to paddle around moving the floating pontoons aside for us to pass through.

Once on the narrow section it seemed everyone was coming out to see and wave at us making us feel like we were famous.  It was early evening by the time we reached the first lock at Sevray and we decided to moor for the night just below it.  Karen sensibly pointed out that as it was late, we probably wouldn’t be able to call for assistance if anything went wrong with the lock controls.

Sevray is right on the outskirts of Paris where the apartment blocks had given way to houses and it was beginning to feel more like a French village with families walking up and down the canal in the evening sun.  Talking to several people we found that pleasure boats are very rare, but they love to see the boats hence the welcome we were getting.

The banks also became lined with casual fishermen and every so often their children and/or wives would come out and sit with them for a while.

By the time we moored up on Thursday we had cruised 18 kilometres up eight locks.

As we were only 15 kilometres from the centre of Paris, many people seemed to be using the cycle path next to our mooring to get to work when we awoke on Friday morning.  After Karen and Buddy returned from their morning run, we set off for the day.  Just around the corner was our first lock on this canal for which we needed the big key to operate it.

Karen followed all the instructions for using the key and when to move it from one position to the next.  All worked perfectly and we were soon up and out.  What we couldn’t work out was why the lock was so long.

There are many low bridges on this canal which is yet another reason why most pleasure boats cannot use it.

As I started to explain earlier, this canal was built to supply water to Paris.  Originally this was for drinking water but nowadays the water is used for cleaning things like sewers, drains and gutters.  In fact, it supplies half of Paris’s non-drinking water needs.  The canal is 108 kilometres long and is primarily fed from water diverted from the River Ourcq but along the way it is fed by several other small rivers and streams.

On top of that, three pumping stations were built to pump water by steam engine up from the River Marne.  It was the first of those pumping stations that we were heading for today.  The original steam engines have been replaced by electric pumps but at least the facilities are still in use.

We stopped for lunch at the first town outside of Paris, Claye-Souilly, where there were some moorings next to a service point.  We checked to see if there was a water supply but there wasn’t which was a shame as we will be needing some by the time we come back down.  We have also heard that there may not be any other water points on the rest of the canal either.

The second lock of the day was a lot shorter but still almost wide enough for two narrowboats.  We got chatting with the lady who lives in the old lock cottage as she came out to look at our boat.  She explained that we were only the third pleasure boat to come up the canal this year; the only other traffic being kayaks and the occasional canal maintenance boat.

Not far from the second lock we came across some, what looked like, abandoned barges.  These will probably be the only boats we will see for the next few days as the lady told us that the other two pleasure boats had already gone back to Paris. 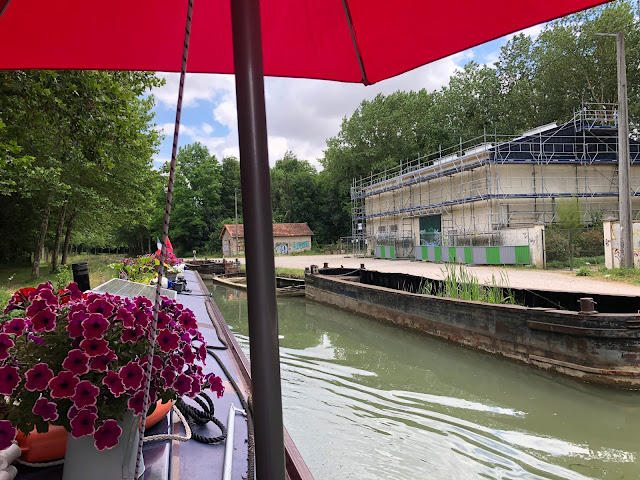 We certainly felt the current against us as we made our way along and could also feel that the canal was quite shallow in places.  Saying that though, it was lovely and peaceful, and we rather felt like we were back on a canal in the UK as it was so narrow, apart from the fact there were no other boats moored or moving.

We finally arrived at Charmentray and moored up next to where the water was being pumped up from the Marne below us.  We went down to the pumping station to find out when it was open only to find that it is only open four days a year and we won’t be around on those days.  When Mike & Aileen came here, they were lucky enough to see a workman wandering around the grounds and he let them have an unofficial look around.  We will pop down again in the morning to see if we can have the same fortune.  if we're still unlucky we could always try again when we travel up the Marne in a couple of weeks.

As far as nature is concerned we have both noticed two things peculiar to this canal compared with the other French canals and rivers we have been on.  Firstly, the waterfowl. I have mentioned before that we have seen few ducks, swans and geese even in towns where they are likely to congregate for feeding by humans.  This canal has many and the the duck families are large in that more than one or two ducklings seemed to have survived from the first broods this year.  They are also terrified of our boat but I suppose that's not surprising with the paucity of boat traffic.

Secondly, butterflies.  It almost felt like we saw more butterflies today than we have since we have been here.  I know that's not really true, but the banks really have been alive with them.  Mainly those from the white family as well as those from the blues, brown and vanessid (e.g. peacock, red admiral and comma) families.  We also saw the occasional scarce swallowtail and several large, unidentified in the main, fritillaries.

During Friday we cruised 25 kilometres which is a lot for us on a canal and we went up two locks.