Hatton station (positioned for the weekend)

It was a lovely bright and frosty start to Tuesday, so I thought I’d finally leave Lapworth and cruise on back to Hatton station.  We could then stay there the rest of the week before going down the locks over the weekend.  Before we set off I walked to the Post Office which happens to be one of Buddy’s favourite places.  If I take him in, then the girls always insist on giving him treats and every time we walk past he tries to drag me in there.  The last time we went in I told them not to give him any treats as we’re trying to stop him expecting food from strangers.  They still sneaked him a couple, so now I tie him up outside.

The Post Office trip was to send Matthew’s mug over to Norway for him.  It was a Christmas present that he had left behind when he went home.  As expected, the postage cost more than the mug itself but he has only been able to get tea cups in the islands where he lives and would rather have his Yorkshire tea in a proper Yorkshire tea mug 😊

We set off when we got back to the boat and had a leisurely cruise back the four miles down the Grand Union to Hatton.

Buddy tends to sit on the towpath side so he can see the walkers, although I imagine he is looking at their dogs.  It’s quite funny if he sees squirrels as he starts hopping from foot to foot and I’m surprised he’s never fallen in.

It’s amazing, but we haven’t passed a single boat on the move since the beginning of November.  That was down in Alvechurch when the boat coming the other way was travelling too fast and hit a couple of moored boats.  It was the sort of situation where nothing needs to be said – actions speak louder than words.  Izzie on Black Sheep did come past us in the ice at Shirley in the middle of December, but I don’t really count that as we were moored up at the time.

I resisted the urge to take yet more pictures of the non-working working boats but couldn’t resist taking a picture of Shrewley tunnel.

Actually, to be honest, I did take pictures of the double tunnel entrance, and really had to include it here.

The eagle-eyed amongst you (such as Mike Fielding 😉) will have noticed that we have postponed our booking for a pontoon in Liverpool docks by a month.  Mike put two and two together and guessed that this means Karen is staying at work for an extra four weeks.  This is quite true, but after this week, she will only have nine weeks left.  She has an agreement with them that if anything else needs to be done after that then it will be done from the boat as we will be on our way north.

We’re going to need diesel soon so, in the afternoon, I had a conversation with Mark, the guy who runs the fuel boat Callisto from Warwick to Market Harborough and also up the Ashby.  Because of the stoppages, he is only operating the eastern side of his route and won’t be back down to Warwick until April time.  As we only intend staying in the Warwick area for the near future and there are no boatyards selling fuel to the public, it means we’ll have to start using jerry cans.  So we need to find which local garages sell red diesel to the public; failing that we can always drive to the boatyard at Lapworth and get fuel there.

People new to narrowboating or planning a holiday on a narrowboat often go onto forums to ask for advice.  Of course, as is often the case with that approach, everyone knows best so there is always plenty of advice given and much of it contradictory.  I would always advocate not over-scheduling by trying to do too much every day.  If you do that then not only does it add stress to what is meant to be a stress-free life, it makes you beholden to the weather – you end up having to cruise in conditions that are not ideal.

I know weather forecasting is not always accurate, but nowadays, the daily local forecasts tend to be pretty good.  On Monday, I checked the weather for Lapworth and it was due to pour hard from nine o’clock until mid-afternoon, when the sun was due to come out.  For some reason I ignored that, and Buddy and I set out for Lapworth just before nine.  We had been moored just down from the water point, opposite the pub, so I pulled up for water first.  In the picture below, the pub is behind the greenhouse – the house by the bridge has been slowly renovated over the years and is now complete.  We assume it’s a second home as we have never seen anyone there and the car in the drive is always in the same spot.

As I cast off again, the skies opened so I quickly put on the wet weather gear.  It was such a mild morning that, fortunately, it didn’t feel cold, so once I accepted it was going to be a wet journey, it was quite fun in a perverse sort of way. It wasn’t long before we came up to the junction with the Stratford canal.

I was hoping there was no one moored in the link, other than the private moorers on the right-hand side.  As luck would have it, there was no one moored on the towpath side so headed down the link and into the basin where the North and South Stratford canals join.  Once in the basin I did a perfect 180 degree turn and headed back into the link to moor up; I would then be facing the right way to get down towards Hatton during the rest of the week.  I’m not bragging when I said it was perfect – with the wind and the rain there was no one around so no one to see it happen – when people are watching then nothing goes perfectly.  That’s one advantage of the pouring rain I said to myself.

You may wonder why we have come back to Lapworth again as it is the opposite direction to where we want to go next (into Warwick and Leamington).  We had cruised to the pub on Sunday and, to do that, had had to turn around meaning we would have to turn again before carrying on our way.  By the nature of narrow canals and long narrowboats, it is normally not possible to turn the boat other than at junctions and at specially built winding holes.  Lapworth was the next place where we could turn, hence the detour.

Whilst having lunch the rain stopped, and it wasn’t long before the sun was out 😊.

I’m in two minds about when to move back to Hatton.  We have to be down the flight by Sunday evening as some of the locks are closing on Monday morning for six weeks.  Looking at the forecast, it is due to get colder so really I should get down to the top of the flight sooner rather than later in case the cut starts freezing over again.  It doesn’t look like it’ll get cold enough for ice to stop us going down the flight itself – with the water flow, it needs to be very cold for a long time before lock flights are frozen enough to damage the blacking on the boat.

At the moment I think I’ll probably have a little cruise later today – let’s see what I feel like after running a few errands in the village first.

As I said in the last blog update, this entry includes some information on the derelict working boats moored at Shrewley, but first, here is a catch up on Sunday.

In the morning we cruised four miles back to the Tom o’the Wood to meet some friends for lunch.  It was a lovely mild and sunny day as you can see from the photographs.


First we had to continue towards the locks at Hatton and turn at the winding hole.


After winding the boat, Karen walked to the Tom o’the Wood with Buddy whilst I drove the boat.  As it was a Sunday and such a lovely day there were a lot of people out for walks along the towpath.


I hadn’t realised that buzzards are now the commonest bird of prey in Britain and there were certainly plenty around today.  Phones aren’t really the cameras to use for taking pictures of birds but here's one of the buzzards flying over us - more to show off the blue skies rather than the bird 😉 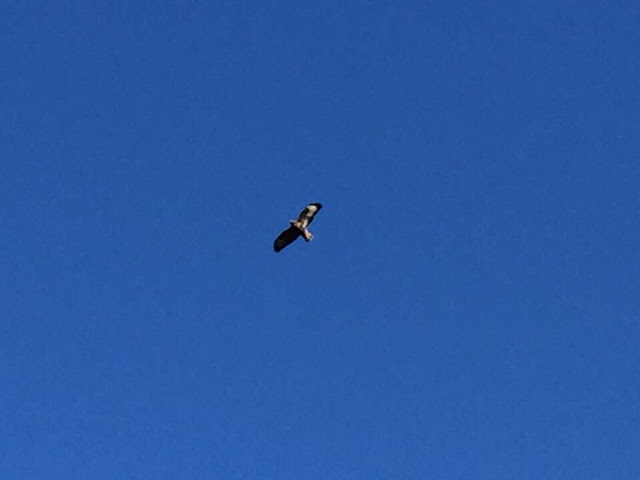 We had a great lunch with Chris, Sue, Mike & Lesley; really good to catch up on all their news.  It was especially good as both couples are having boats built at present so no one was left out in boring boating conversation which, in my memory, can be just as boring, for non-boaters, as ski conversations are for non-skiers.

After a good pub lunch, Mike & Lesley ran us to Hatton station to pick our car up and had a nice surprise for us when they dropped us off.  When they helped us clean the boat in the summer, after we had been moored next to the house they are building in Cropredy, Mike couldn't believe the state of our mop.  We couldn't really understand what he was on about, but they had bought us a new one anyway - can you really tell the difference? 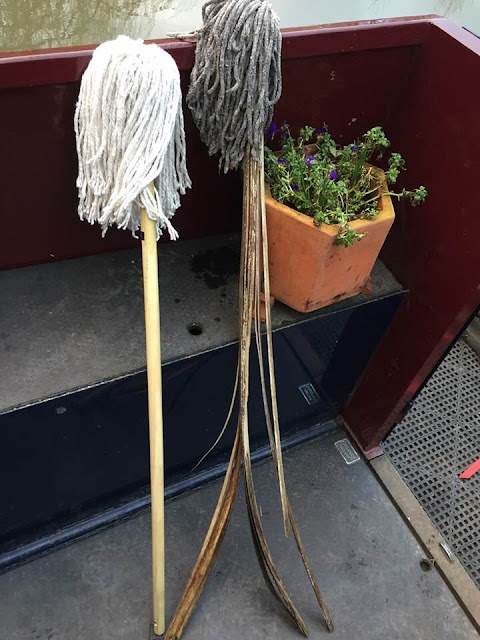 As it was getting dark by the time we got home, we decided to stay put and I'll run the boat down to Lapworth tomorrow to turn round and then cruise back to Hatton station for the rest of the week.

So, back to the non-working working boats; this shows the state of them when Buddy and I cruised past last Tuesday:

I am indebted to our boating friend, Wendy, for providing a lot of this information, some of which came from Bate’s Boatyard website.  Jem Bates is one of the few restorers of wooden narrowboats in the country and his yard is on the Aylesbury arm of the Grand Union canal.  Jem also has a dry dock at the junction of the arm with the Grand Union at Bulbourne and, coincidentally, we had our first boat blacked there one winter.  Also, coincidentally, Karen’s mum, Ann, is very good friends with Betty who is the grandmother of Jem’s wife – small world eh? 😊

The potted history of Mabel is as follows:


* The dry dock at Tooley’s boatyard in Banbury (on the Oxford canal outside the indoor shopping centre) is the oldest inland dry dock still working today – it first operated in 1790.

This is the potted history of Forget-Me-Not which is one of the last (or the last) boat left that was built by Sephton Boats of Coventry:

These are some pictures of the boats taken during their history: