Melun (sunny on the Seine)

We’re both happy to admit that we were really nervous about moving onto the Seine on Thursday morning.  Of course, being nervous is better than being gung-ho as it means we should take more care and be more aware.  It goes without saying almost that as well as being full of trepidation we were also extremely excited.

One of my worries was that the radio has to be used for all contact with the locks and, of course, all conversations are in French.  I was worried that I would get responses that I didn’t understand which really doesn’t matter as I could ask for a repetition; it was more if I misunderstood something.  To partially overcome that (I hesitate to say mitigate as that sounds like a ‘work’ word 😉), we agreed to both be present on all radio communications.

I know I used the radio on the locks on the Yonne but somehow it wasn’t an issue as the locks were smaller and there were very few boats until we neared the Seine.  That really highlights our main reason for our nervousness: locks twice the size of those on the Yonne, much more traffic and boats up to 180 metres long.

For these reasons we planned to set out early from Montereau but when I took Buddy out for his morning walk there were already commercials every few minutes going along the Seine.  We left soon after eight and, as we were right on the junction, Karen went to the front to check if it was OK to turn left off the Yonne.  As luck would have it, three boats were coming upstream so we sat and waited like a car at a T-junction.  The third boat ended up turning off towards us up the Yonne, so we took our cue and we were on our way.

Ironically, probably the longest boat we saw all day was the first one we met once we were on the Seine.  It was a tug pushing a wide 70 metre barge of gravel with two narrow 70 metre barges in the front also full of gravel.  The whole thing probably wasn’t far off 160 metres 😊

Luck seemed to be on our side and all the traffic seemed to be coming upstream and no boats caught us up before we reached the first lock, so we had it all to ourselves.  We had half expected to be told we would have to wait for a commercial.  The other good thing was that the éclusiere was extremely clear and precise in her instructions as was the one at our second lock where we were told we had to wait for three boats who were coming up the lock.

The picture above will serve to highlight a potential disaster that we manged to avoid.  As you can see, the sides have two lines of horizontal metalwork.  We had read about these and had made sure all our fenders were up as they could get caught behind and start hanging the boat up.  What we hadn’t realised was that the metal work protrudes out from the lock wall and we suddenly realised that the boat was beginning to tilt.  Fortunately, I managed to get the rear well away to pull the front off before we were capsized!  Lesson learned that we must hold the boat away from the sides at either end.

Many of the commercials clearly have a family living aboard as we often saw couples in the cabins and also assorted children’s toys on the top decks, especially those with large hot tub type pools.  Most also have a car on the back deck too.  The majority of the boats were carrying sand or gravel although we did see other cargo such as tubing and reels of cables.

We went past the remains of an old lock that now seems to be used as a boat graveyard.

A boat finally caught us up and I let him overtake us.

Just after that experience we passed the entrance to the Canal Du Loing which may be on our travel itinerary at some point.  It runs south down to the Canal de Briare which in turn meets the Canal du Centre which we took earlier this year to get down to the Saône at Chalon-sur-Saône.

We were soon into our second lock and, as so often happens in the UK, we shared it with the boat that had overtaken us.

You can begin to judge the size of these locks as the boat we shared with was 90 metres long.  In case you were wondering how I know about these different boat lengths, they all seem to carry their length  in large lettering on the sides, and sometimes other information such as breadth, air and water draughts and gross and unladen weights.

This lock was different as the rear gates came up from below.

We were soon heading through Thomery and were looking for the mooring Karen had sussed out.  We found it right on the inside of a bend and it was just long enough for us.

We have to find moorings with rings, cleats or bollards as stakes wouldn't last ten minutes with the wake thrown up by some of the passing commercials.

After having lunch and resting for a while in the shade we went for a walk around Thomery.  One of our targets was to see if we could find a lavoir and to be honest we cheated by doing a map search for Rue du Lavoir or similar.  We were in luck and found a Chemin du Lavoir, strangely, it was quite a way out of town, so it was a very slow walk in the heat.  We found the lavoir, but it was one that has been restored and converted into a small village hall.

During Thursday we cruised 18 kilometres down two locks.

UK friends of ours, Ray & Marie, who also live on a boat as continuous cruisers have a cunning way of working out where to moor next.  Like Karen, Ray goes for runs along the towpath.  Unlike Karen, Ray regularly runs around 20 miles, so that’s far enough to find a good mooring within the next ten miles!  Karen wishes she could follow the same approach too, but to be fair that distance is just too much in this weather.

So, when we set out after Karen’s early run on Friday morning, we didn’t really know where we were going to moor at the end of the day.  The nearer we get to Paris, the fewer places there are to moor, and many people end up mooring at the end of lock landings providing they leave enough room for commercials to moor too.  That was our plan for each of the next three nights; not perfect but it will have to do.  I know we could travel further each day and get to Paris sooner, but spaces are limited at the basin at the Bastille and we can’t arrive until Monday.  Also, Matthew & Jo are coming to see us for a couple of nights which means that if we could arrive earlier, we would have to stay longer in a city which is hardly fair on Buddy.

We had quite a long run before the first and only lock of the day and we were reminded of being on the Thames with the many large houses with grounds reaching down to the river.

There were several riverside villages too: 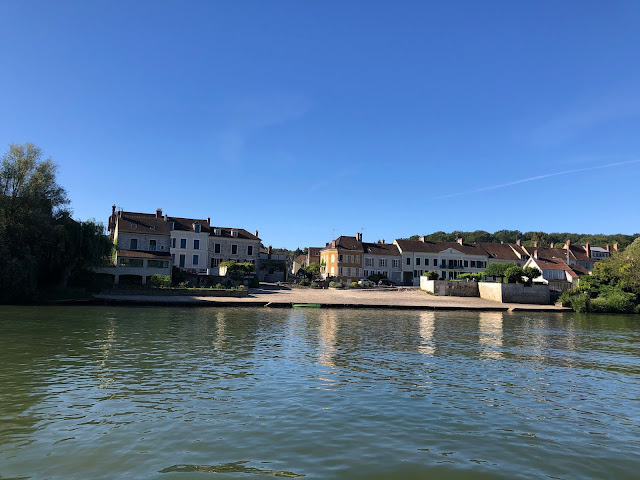 We shared the lock with a French couple in a nice old Dutch barge but still felt dwarfed with room for a couple more narrowboats behind us even though we were practically at the back: 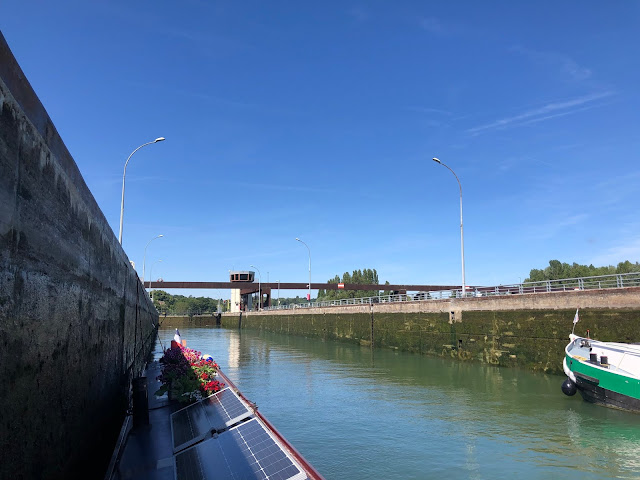 Even though radio traffic is meant to be kept to a minimum, the éclusier was obviously taken by our boat commenting how pretty it looked, he also leaned out of the control tower and shouted a cheery bon journée from on high!

By noon we were approaching Melun and decided that if we saw any moorings that we would stop for lunch.  We passed the imposing prison building which has been the subject of much discussion about the state funding its relocating out of the town.  We understood why it was built here initially because it is situated on an island in the Seine.

After passing under three bridges in quick succession we saw a length of quayside that had bollards but strangely no boats moored other than a trip boat.  We stopped anyway, had lunch and then decided to stay for the rest of the day as it was only five kilometres short of our target for the day.

We really felt too hot to walk around the town so had a lazy afternoon doing the occasional odd job.  One of those jobs was to inflate some black fenders to replace the horrible looking white ones on the front.  As you probably agree, she's beginning to look a lot happier from the front.

During the day we covered 24 kilometres down one lock.