One of my first jobs on Wednesday morning was to clean up the barbeque.  Whilst doing this I inadvertently dropped three of the four racks into the water so had to get my trustee magnet out. 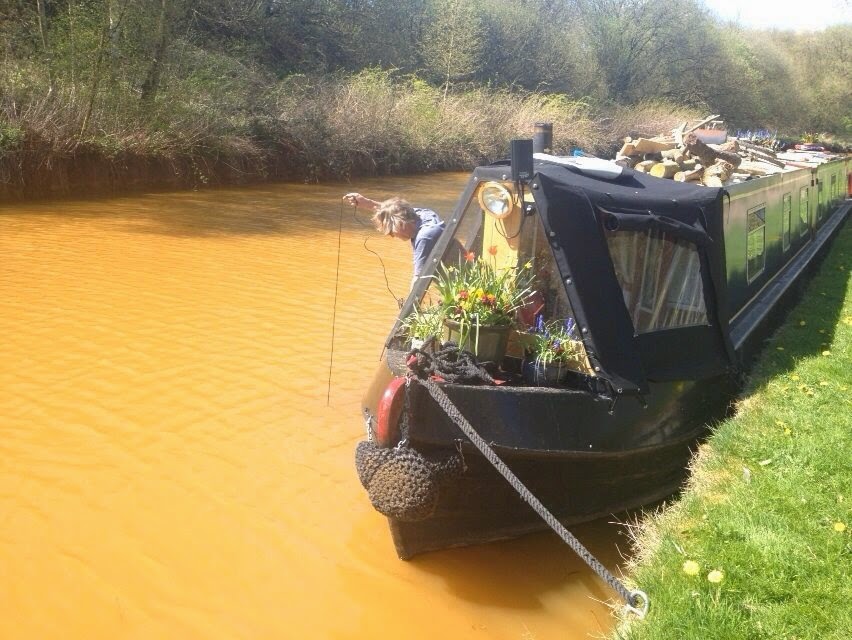 I managed to fish out two of the racks so not a bad spot of fishing. 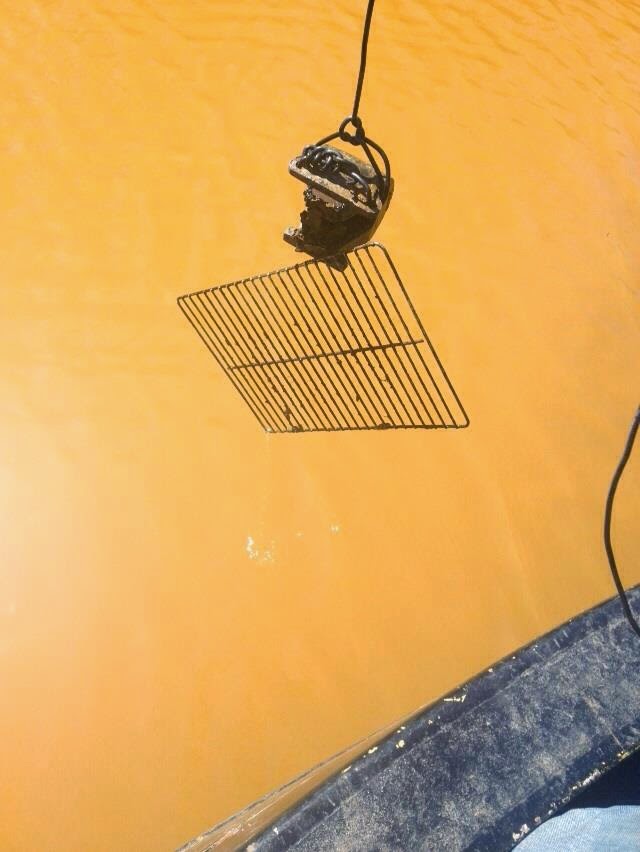 Many people have been asking about the orange/red colour of the canal in recent days.  It is due to the iron oxide that is leached out of Harecastle Hill into the Harecastle tunnel which is only a few miles away from here.

We set off about ten to get through the last six locks before hitting the junction with the Macclesfield canal which we will be heading up to get to the Peak Forest canal.

We need to find out what this implement/aid is that we saw at one lock. 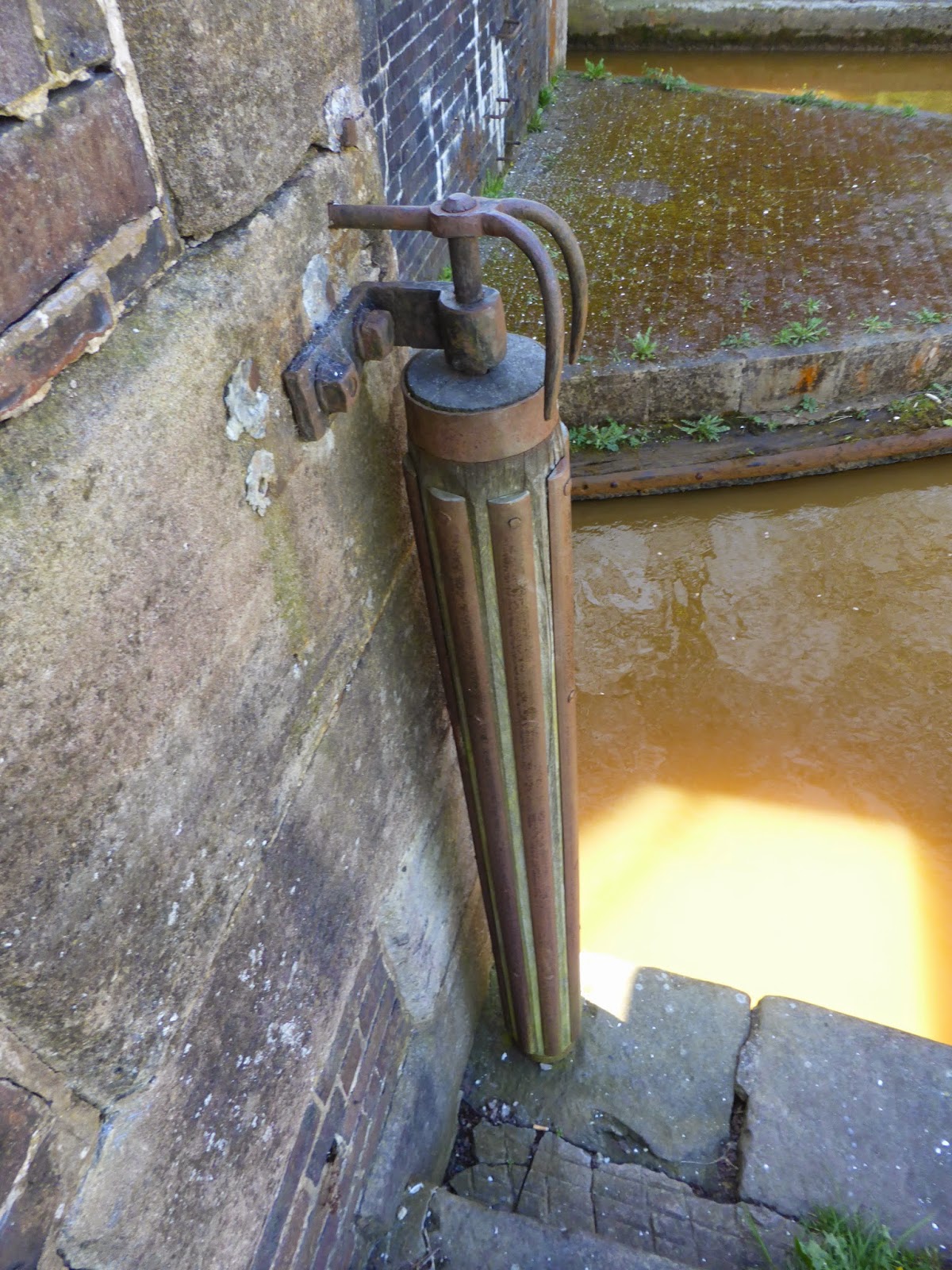 These are the old wharf buildings at Kidsgrove that are now CRT offices. 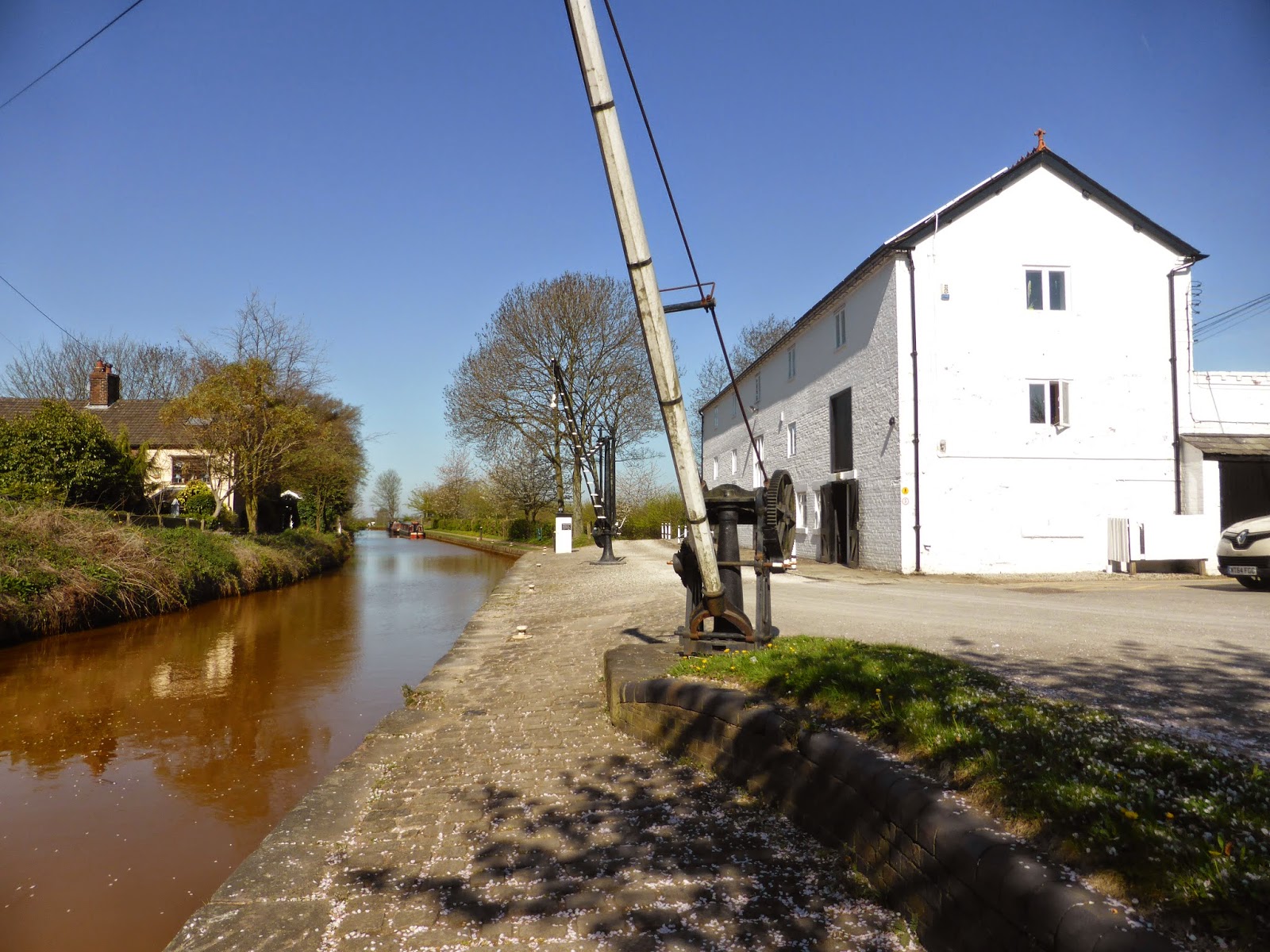 As we went under the aqueduct Karen ran up to the top to see if a boat was crossing as a picture of a boat going over us would be quite unusual.  Unfortunately a boat had just passed through. 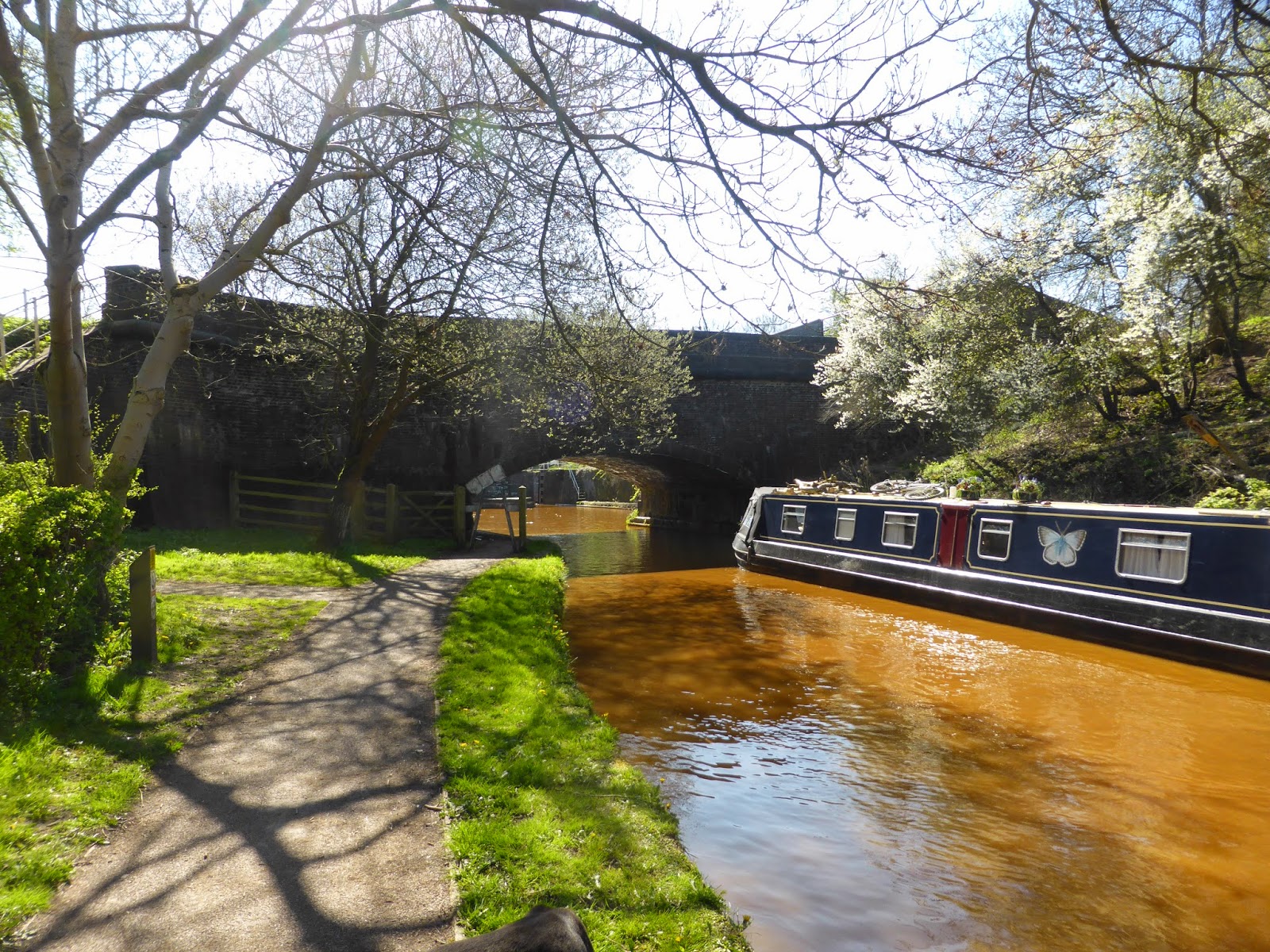 The junction is called Hardings Wood junction and is in an area of Kidsgrove with the odd name of Red Bull.  The junction had nice detailed signposts - we are only 37 miles from Whaley Bridge in the Peak District.. 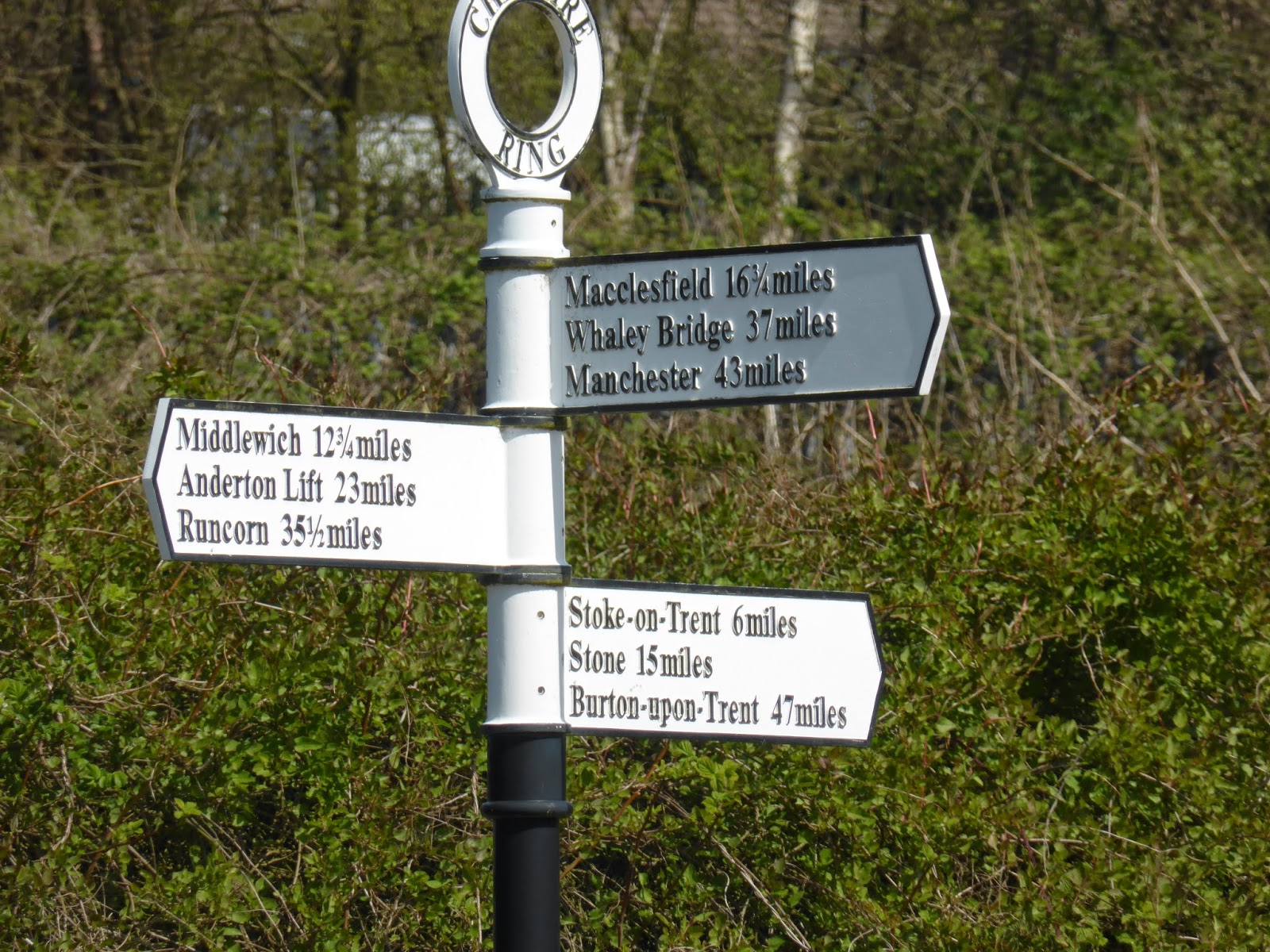 Here we are leaving the Trent & Mersey to make a 180 degree turn back on ourselves on the 'gyratory' to start our journey up the Macclesfield. 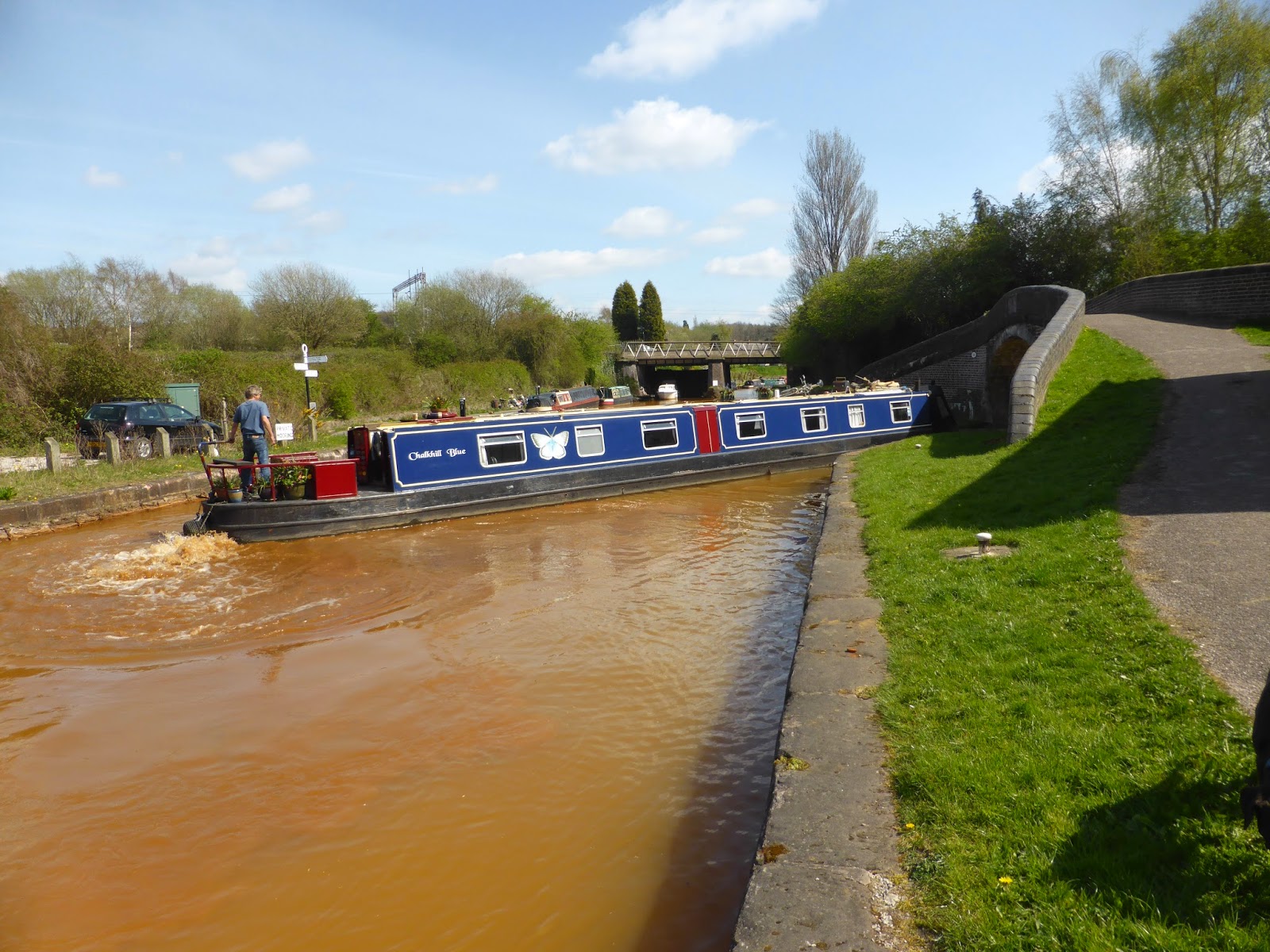 The first bridge on the Macclesfield gave us the name and date it was opened – 1829.  Like the Shropshire Union this was a late canal and built straight like a railway with embankments and cuttings.  It was lucky not to have been converted into a railway a few years after opening. 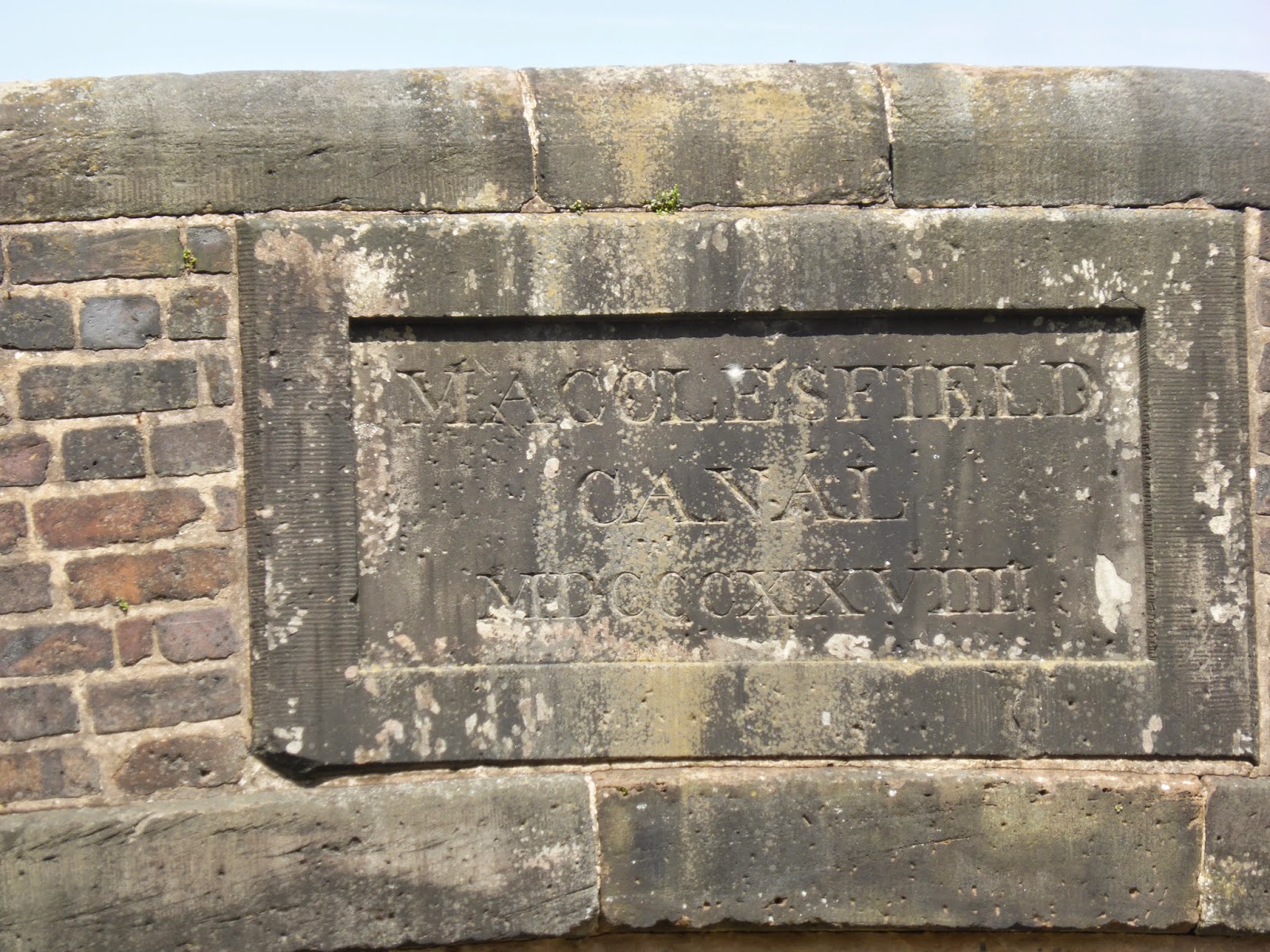 Karen felt happier about my shoddy workmanship when we passed this boat. 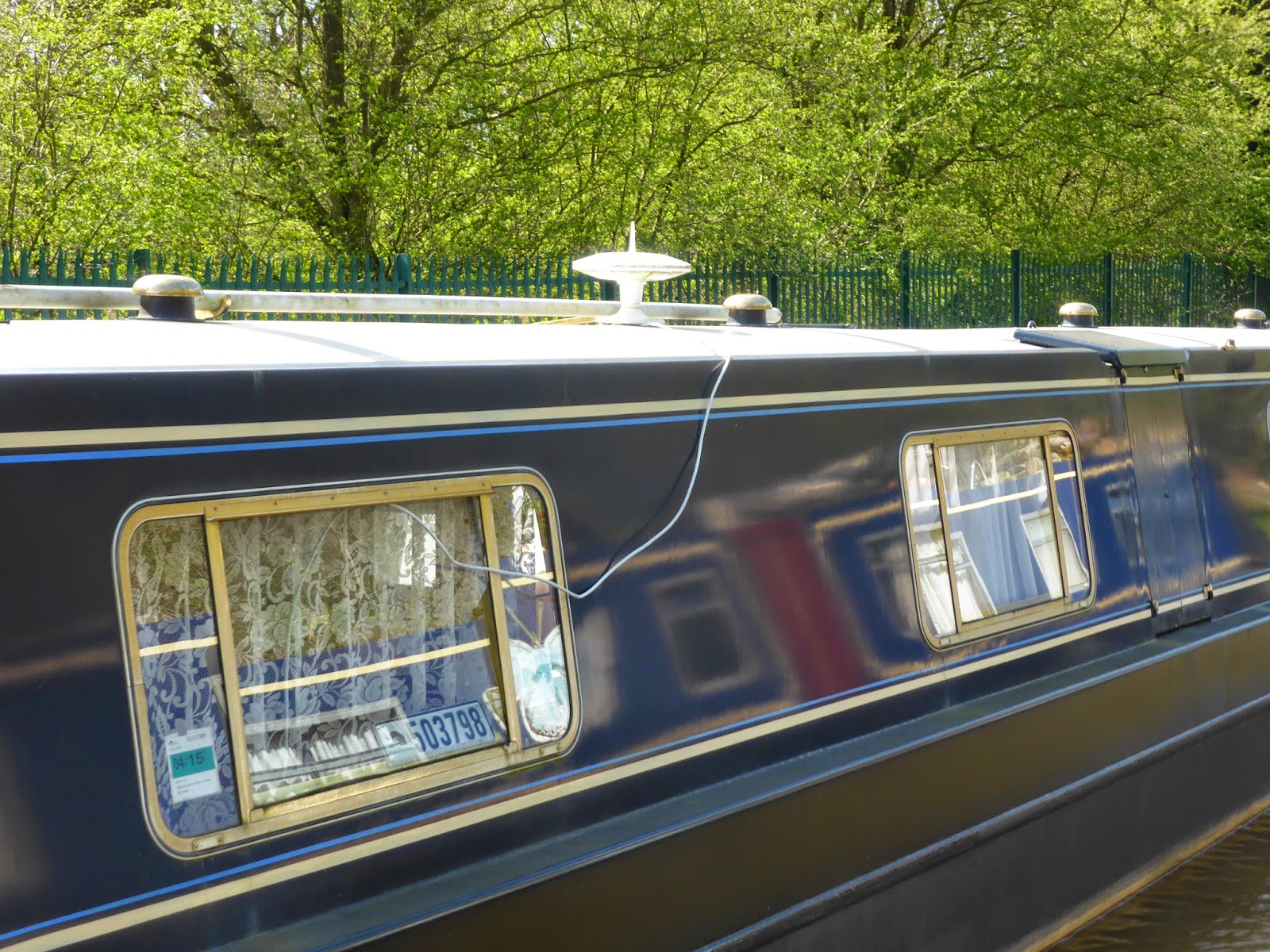 Passing another boat, a man lent out and said, "Afternoon - ah you've had your haircut".  We hadn't seen him since we were down in London last year!

This is approaching the aqueduct over the Trent & Mersey.  We had already noticed the water was no longer deeply coloured as we had risen up a couple of locks. 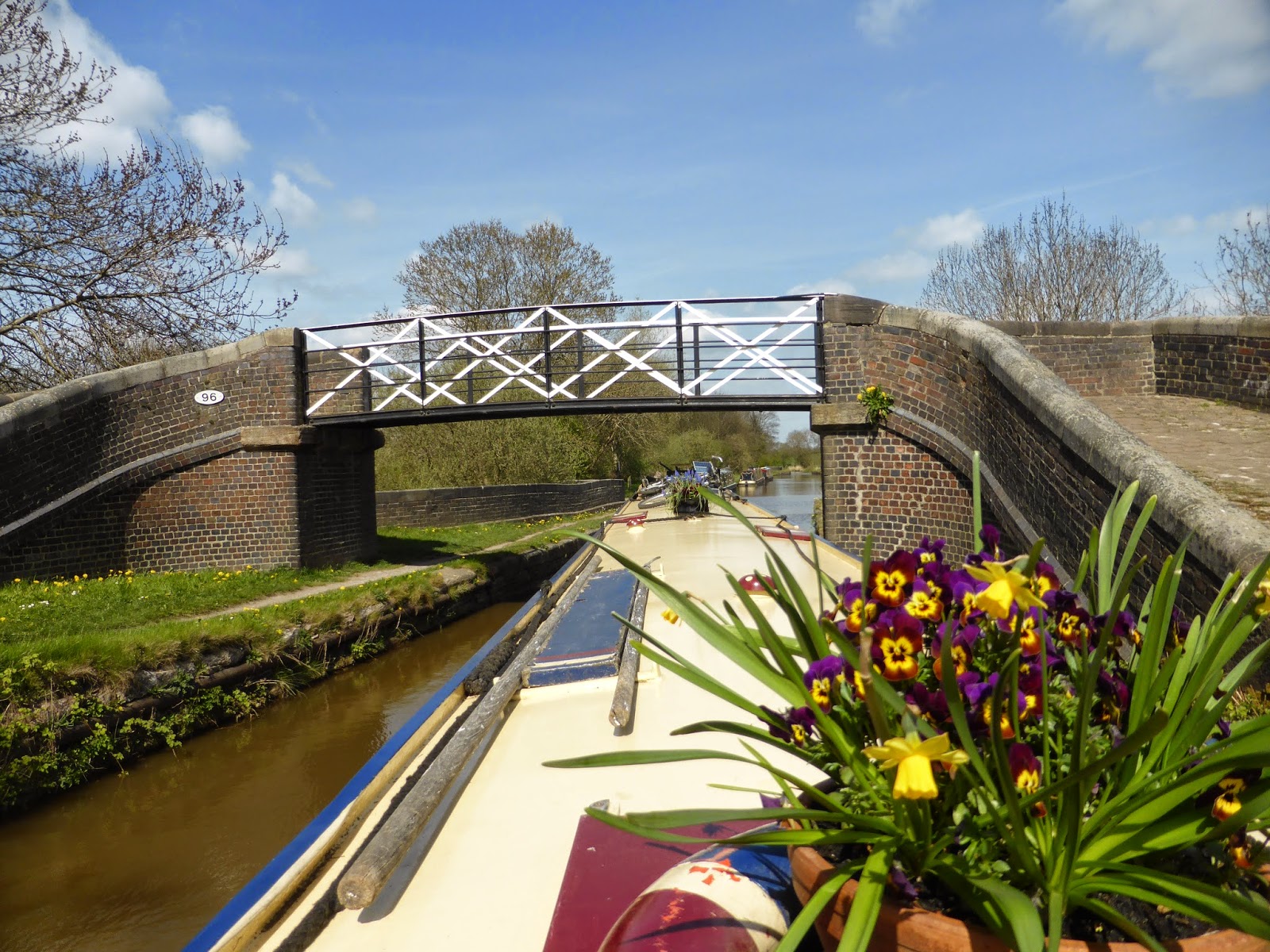 This is looking down from the aqueduct - Karen had to stand on the roof to take this. 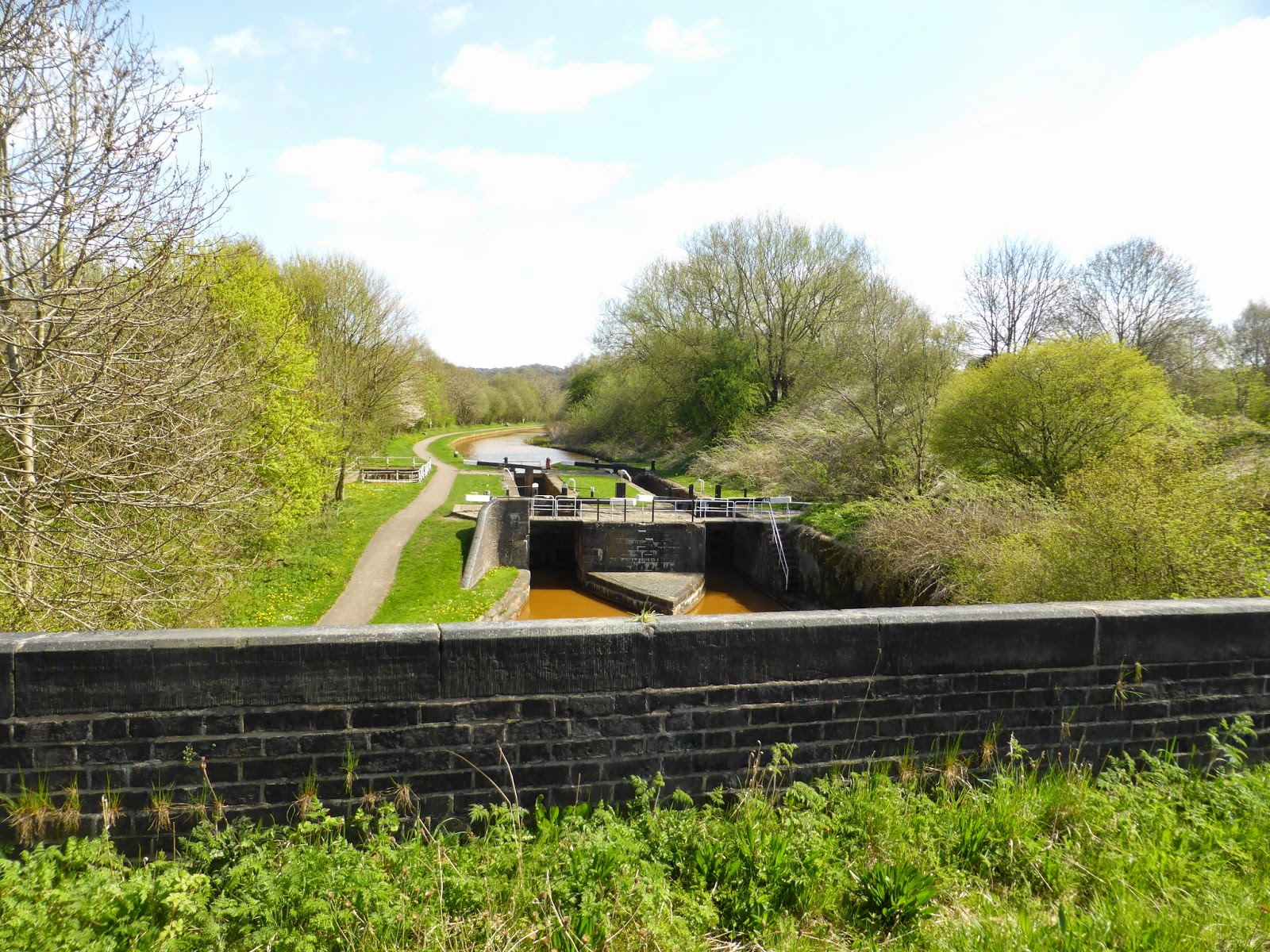 After a mile on the Macclesfield we went through Hall Green lock which only has a drop of 12 inches as it used to be a stop lock to enable the collection of tolls as boats passed between the Macclesfield and Trent & Mersey canals. 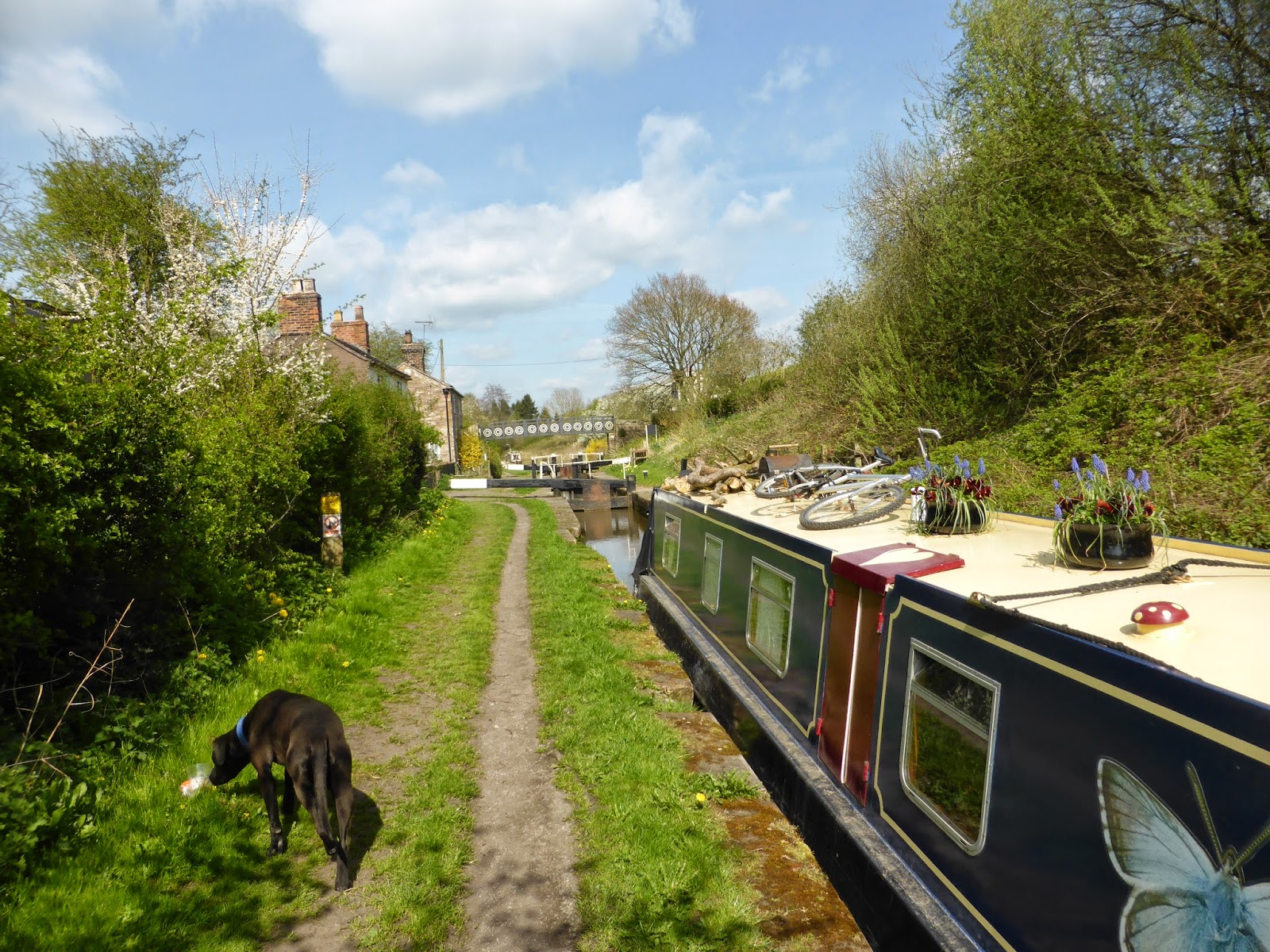 The milestones on this canal are made of stone rather than the usual iron.  During World War II they were buried so as not to aid invading forces.  They have since been recovered and restored by the Macclesfield canal society. 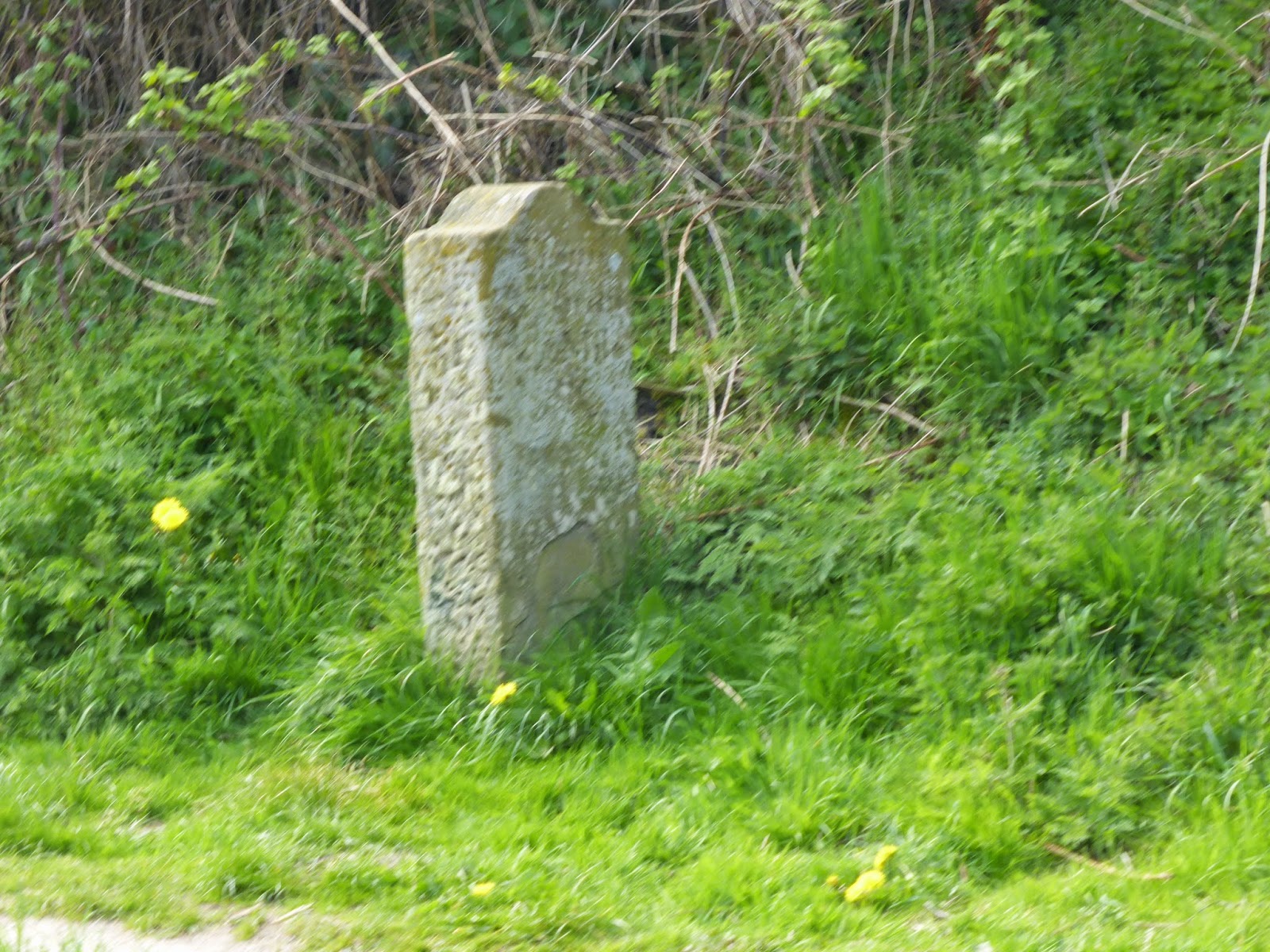 The bridges are made of a lighter sandstone than the red we have been used to for the last few weeks. 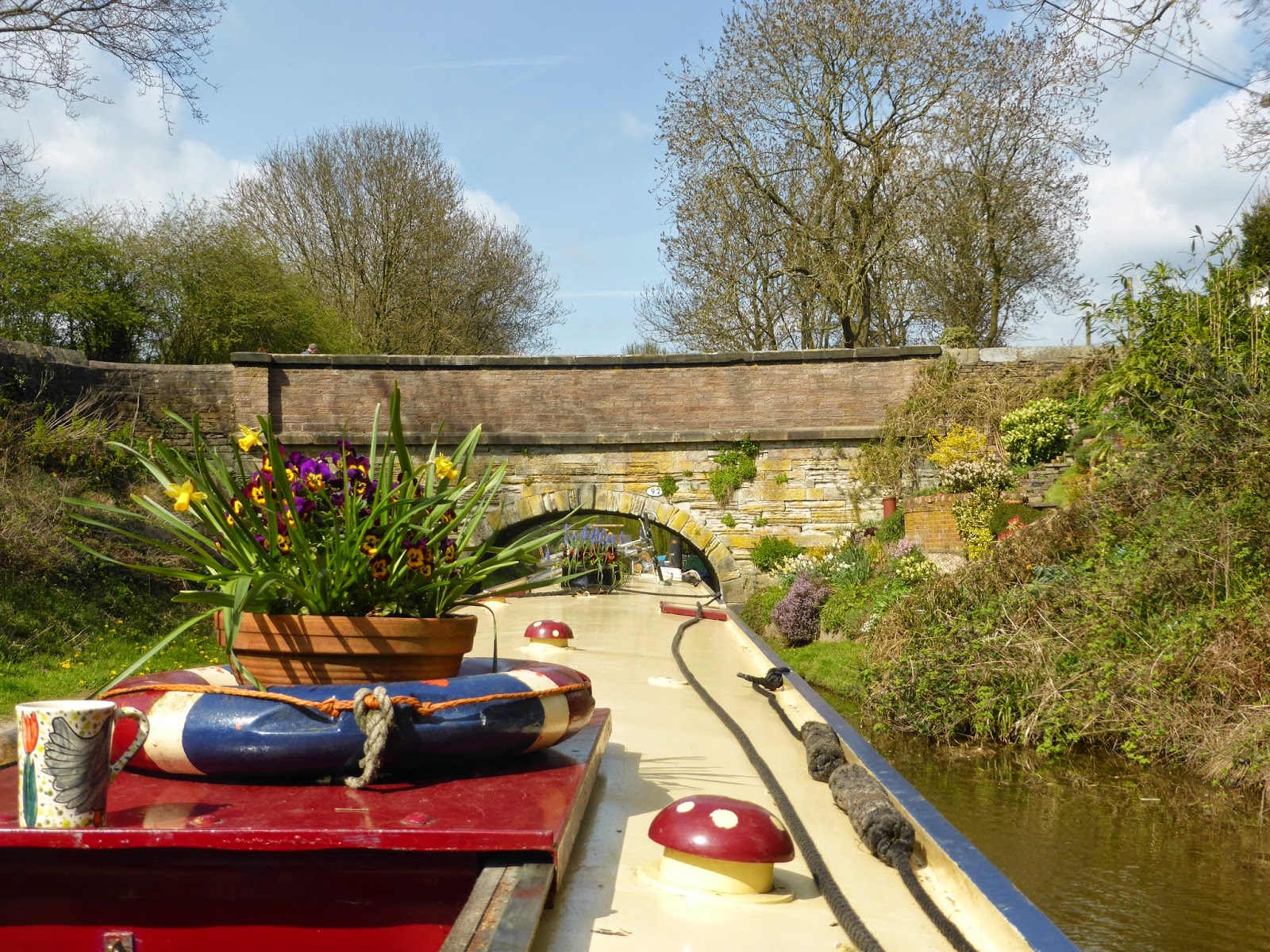 We passed Ramsdell Hall house which was built around 1750 and, surprisingly to us, is still in private ownership. 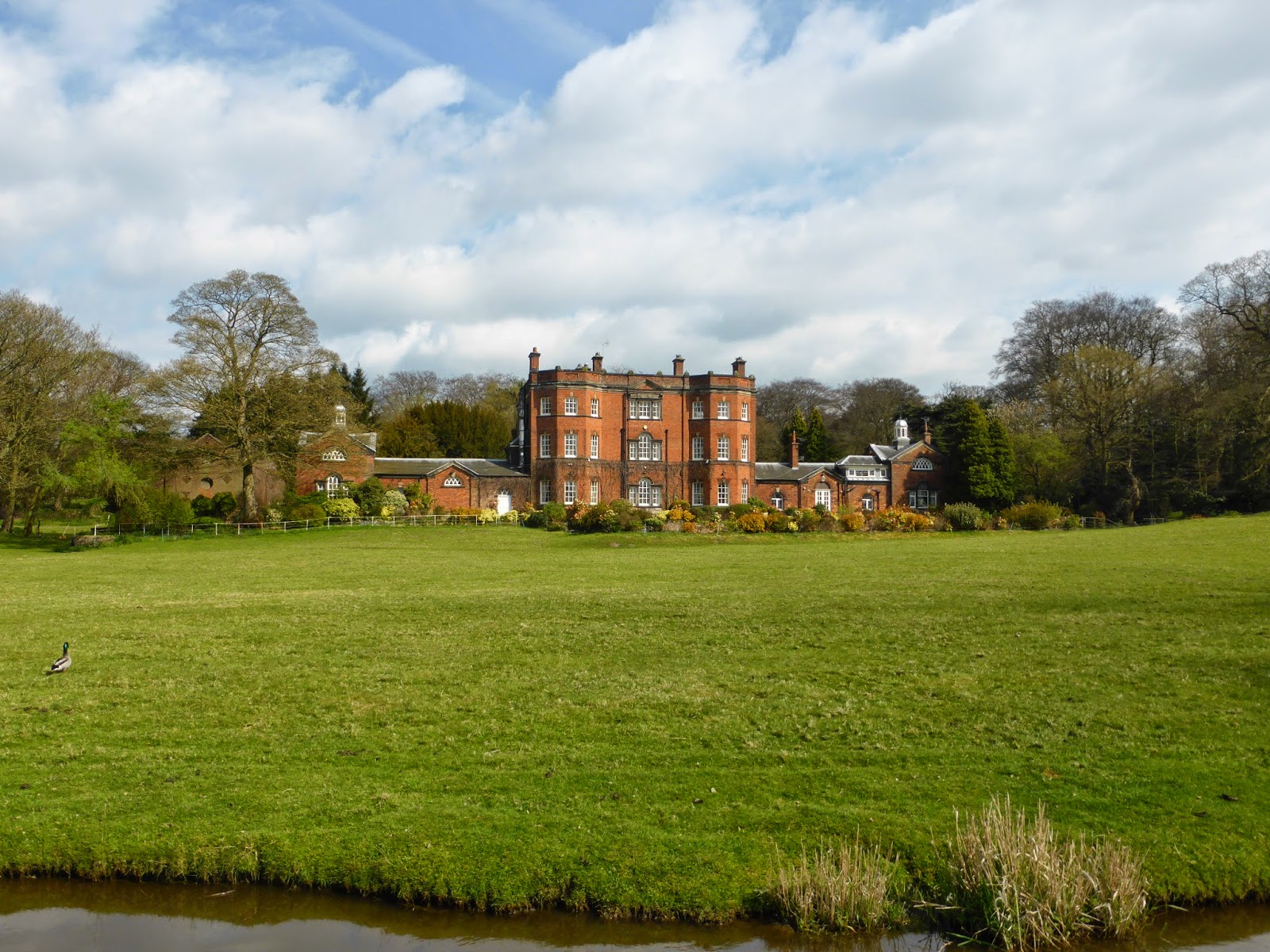 The tow path along its borders has this ornate iron fence which has recently been nicely restored after nearly 200 years. 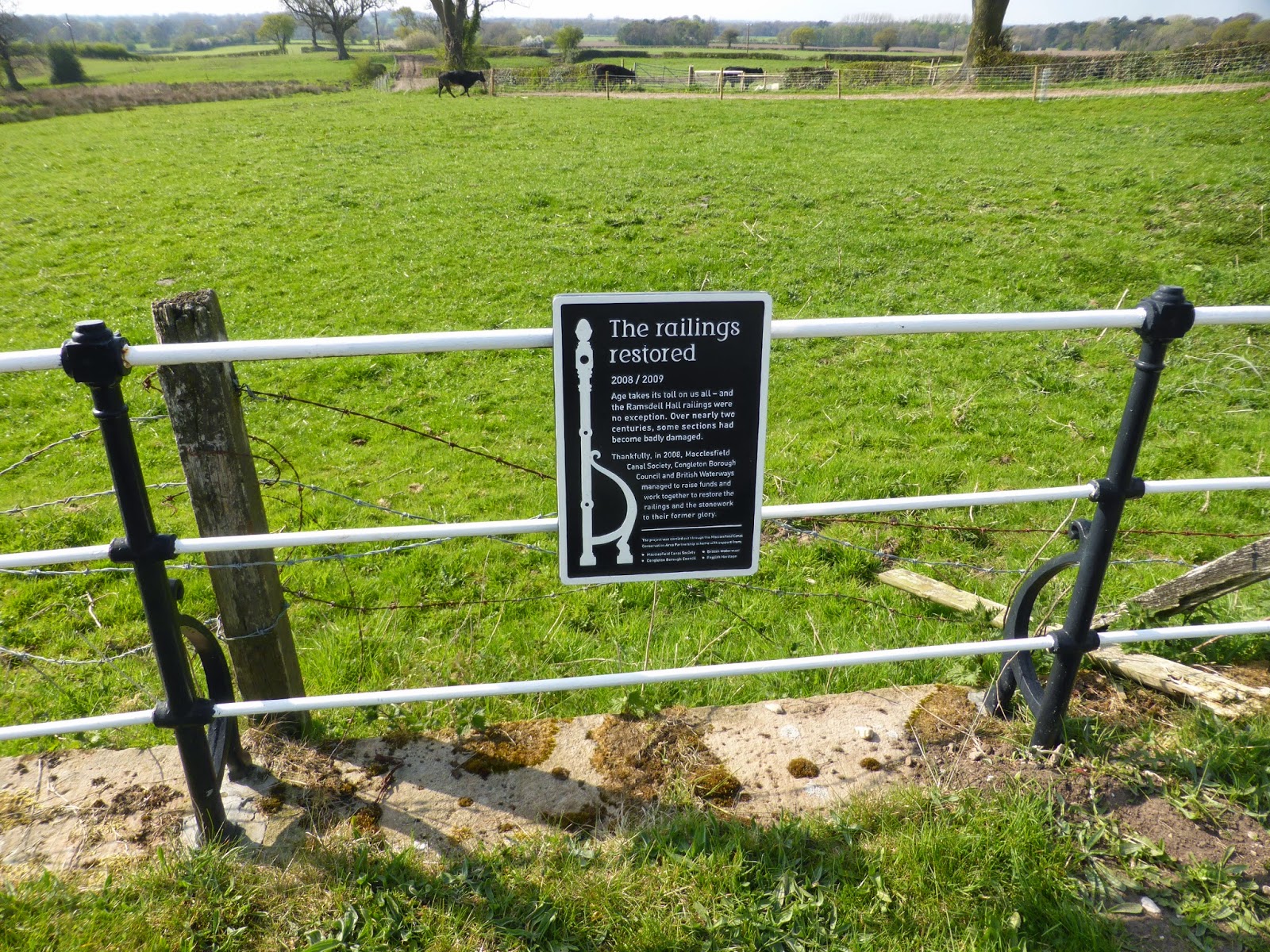 After we moored for the day we went for a walk to the top of Mow Cop – a 1,100 foot high hill in the middle of the Cheshire plain.  It was hazy but we could just make out the Peak District where we are headed next. 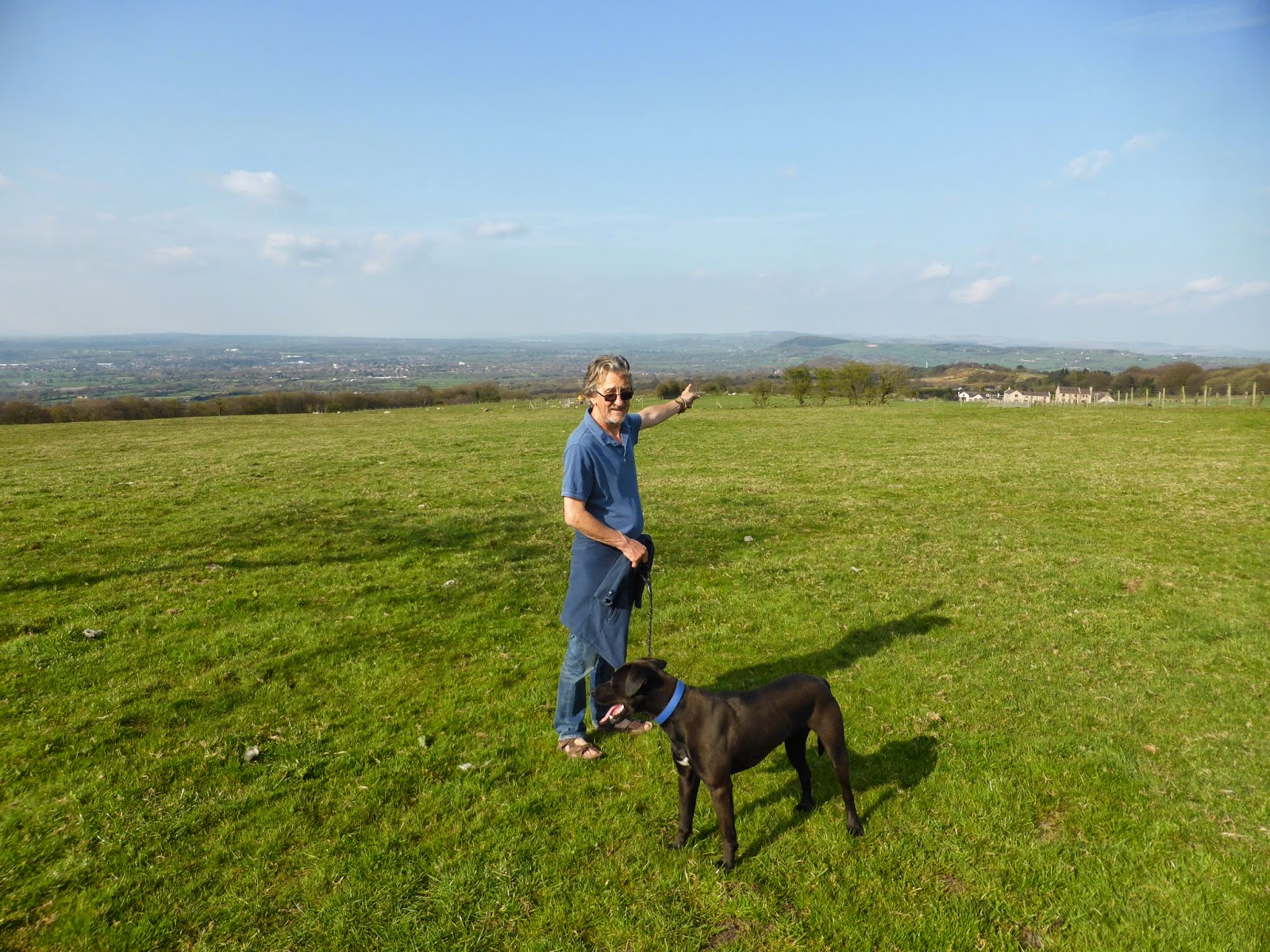 The dish in the distance here is one of the Jodrell Bank radio telescope dishes. 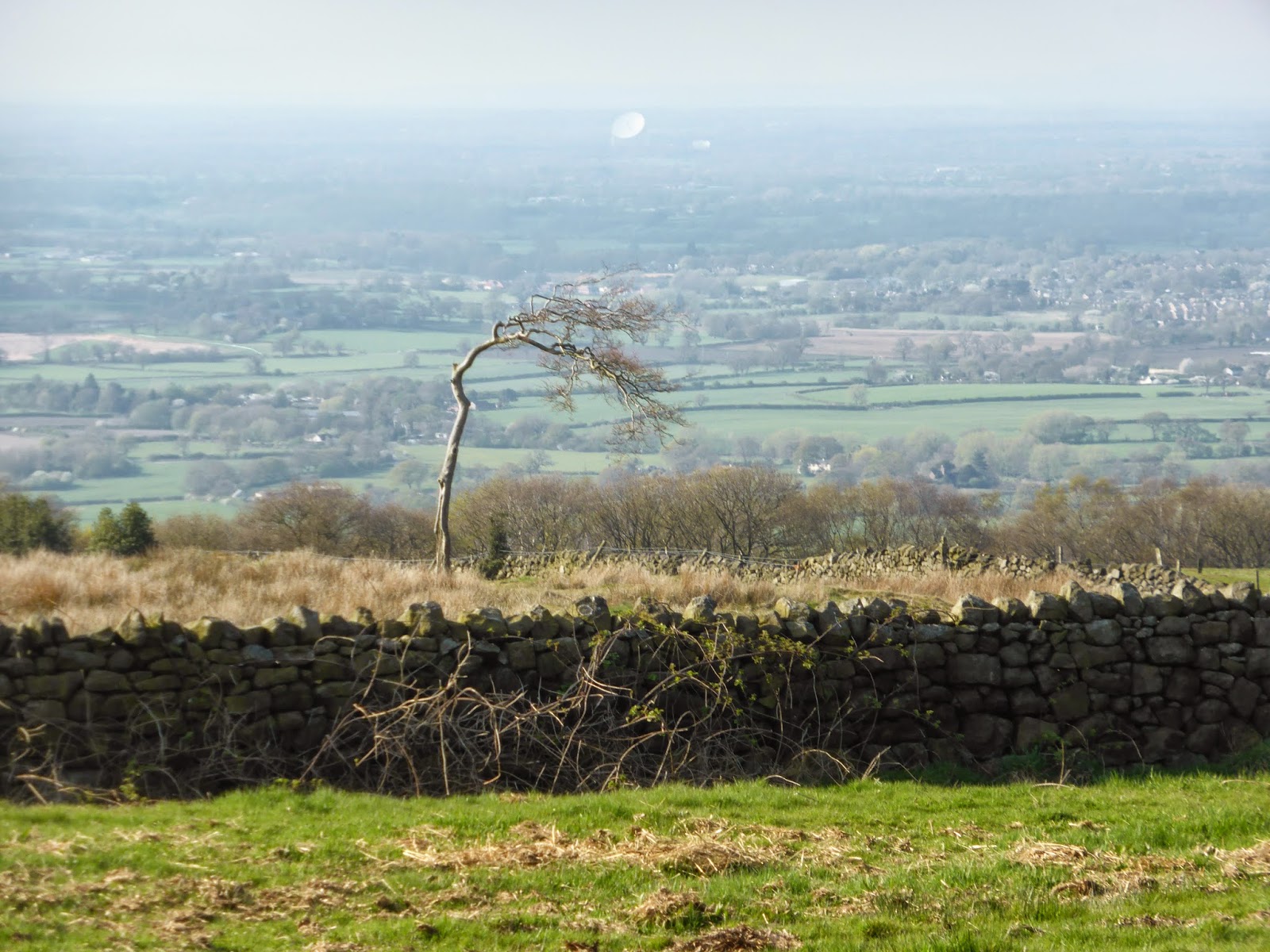 At the top of Mow Cop stands the old man of Mow.  This is made of millstone grit like the tops of many of the hills in the Peak District and Pennines; millstone grit is used to make querns – the round stones used to grind grain into flour.   I assume that this was deliberately left like this during the quarrying period. 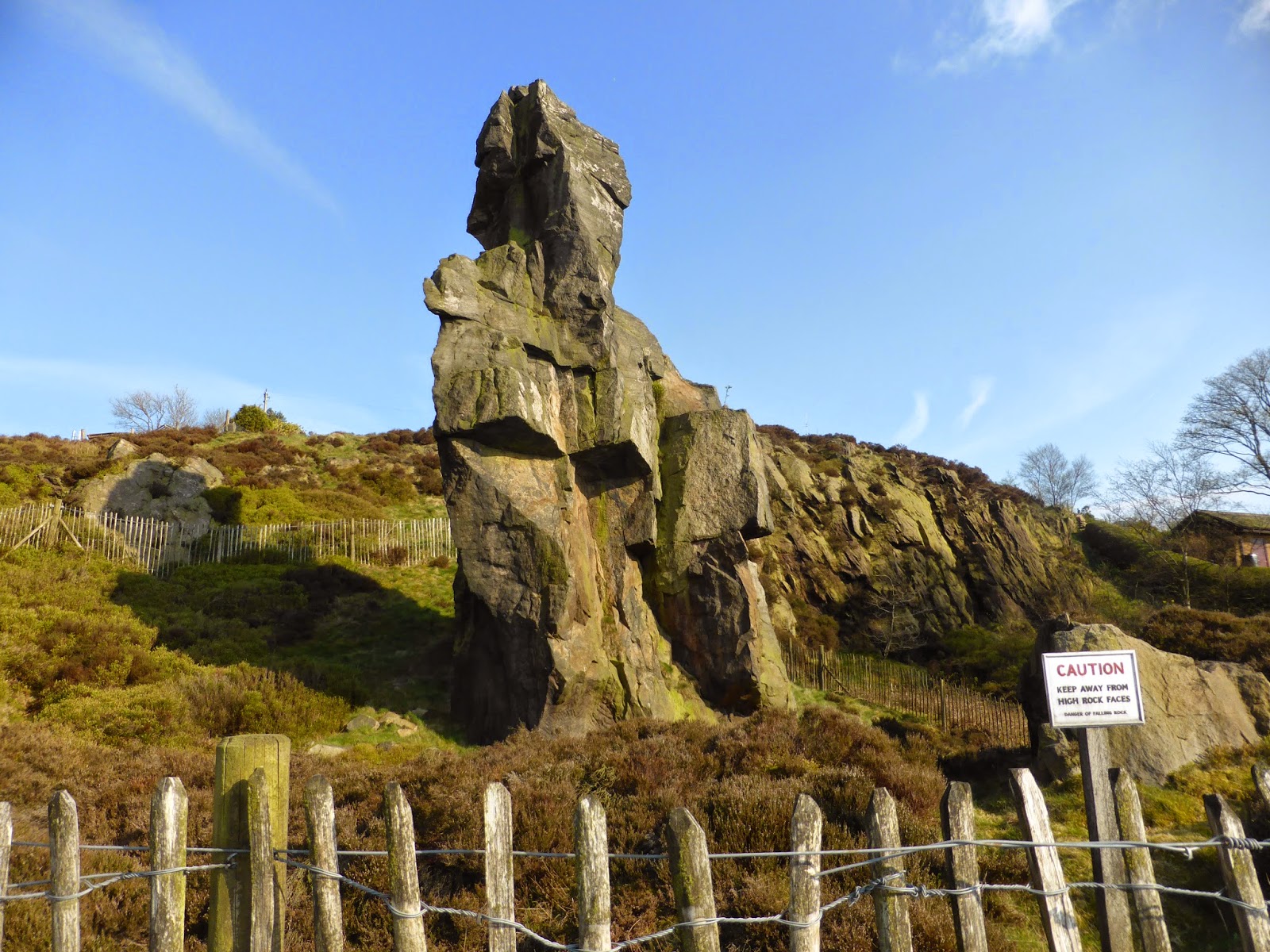 Also at the top is a folly built in 1754 to look like a ruined castle. 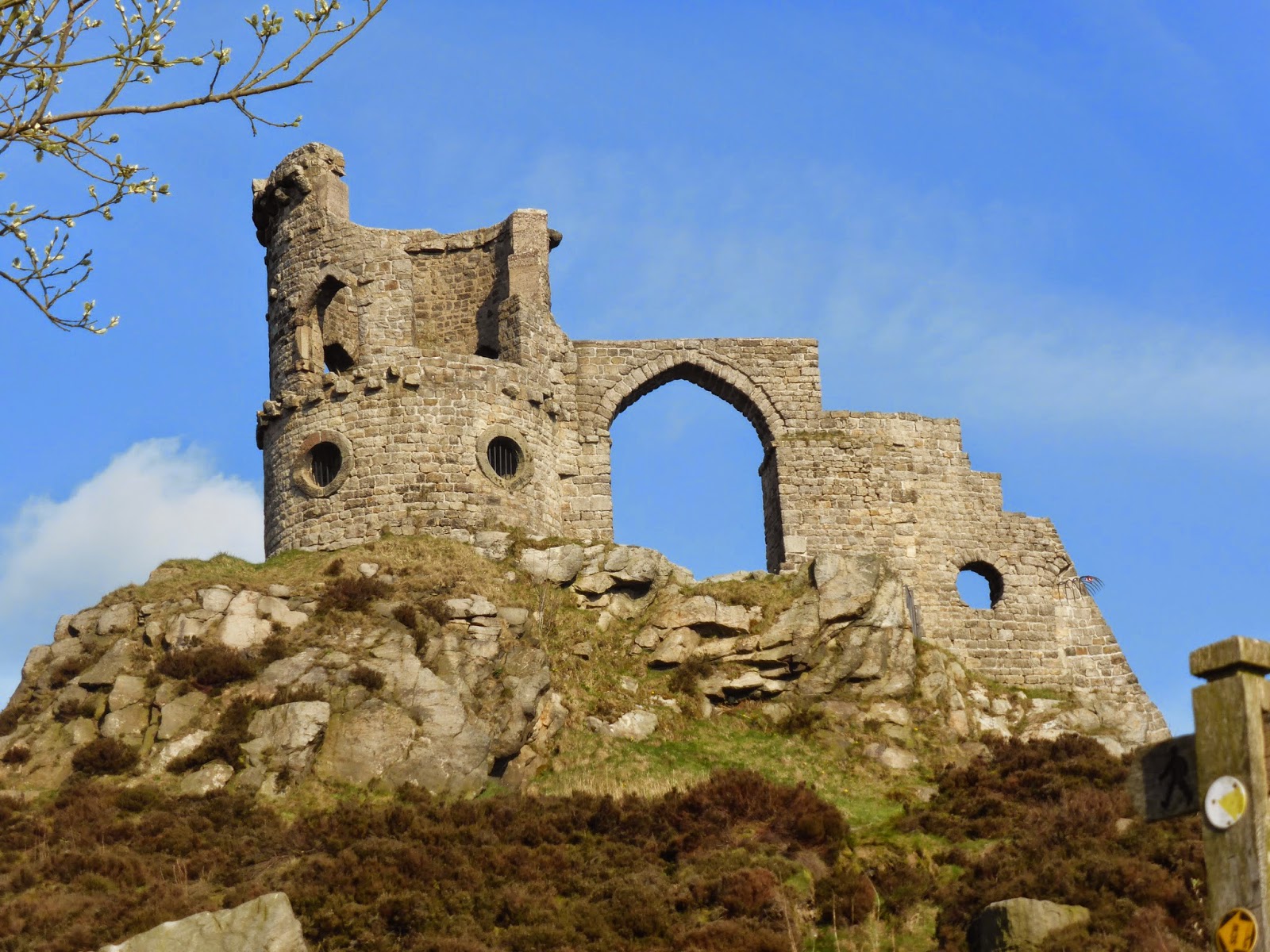 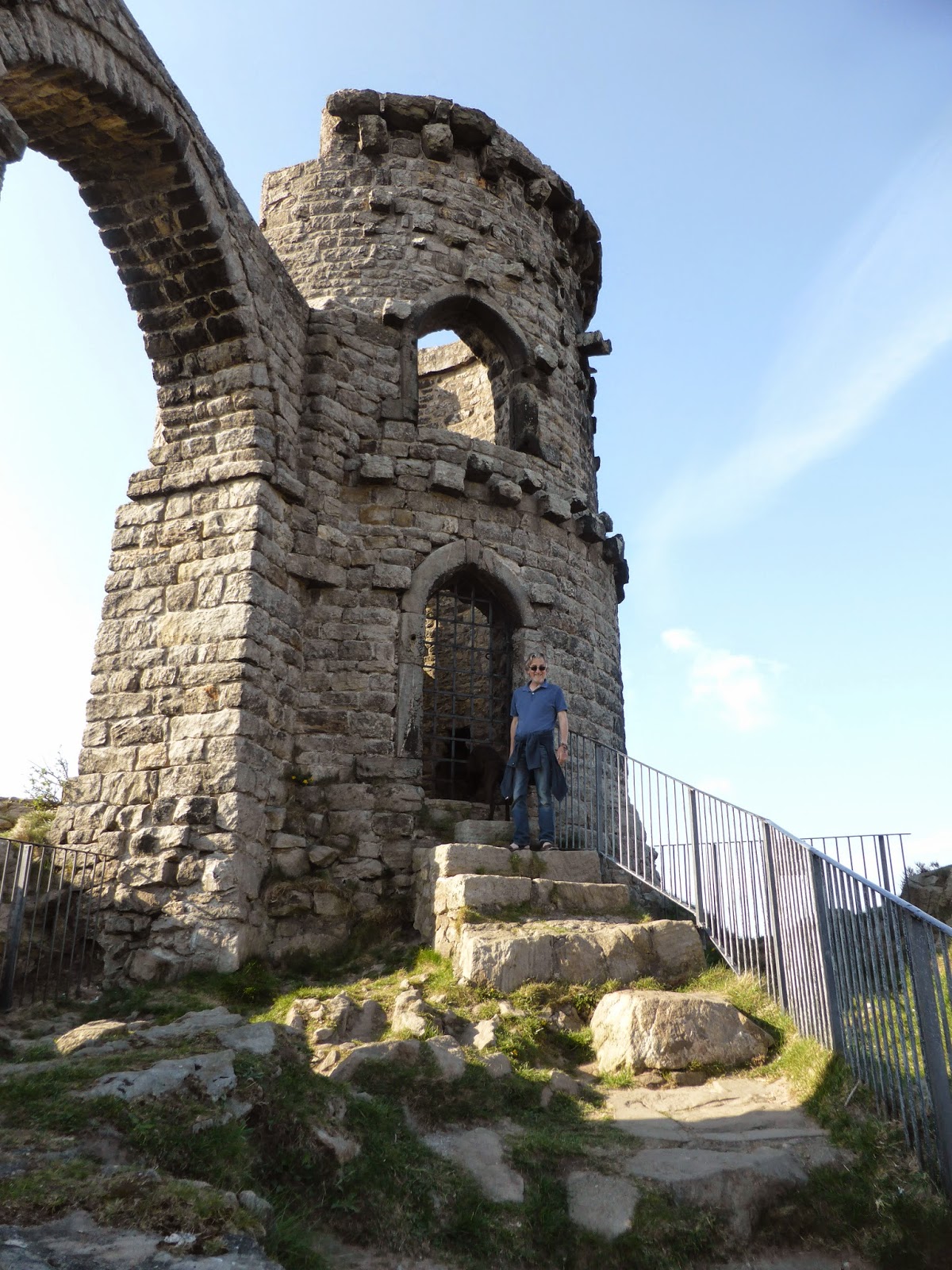 The houses at the top of the hill formed a pretty village and each must have fantastic views whichever direction it faces.

These are the six locks we went through before leaving the Trent & Mersey. 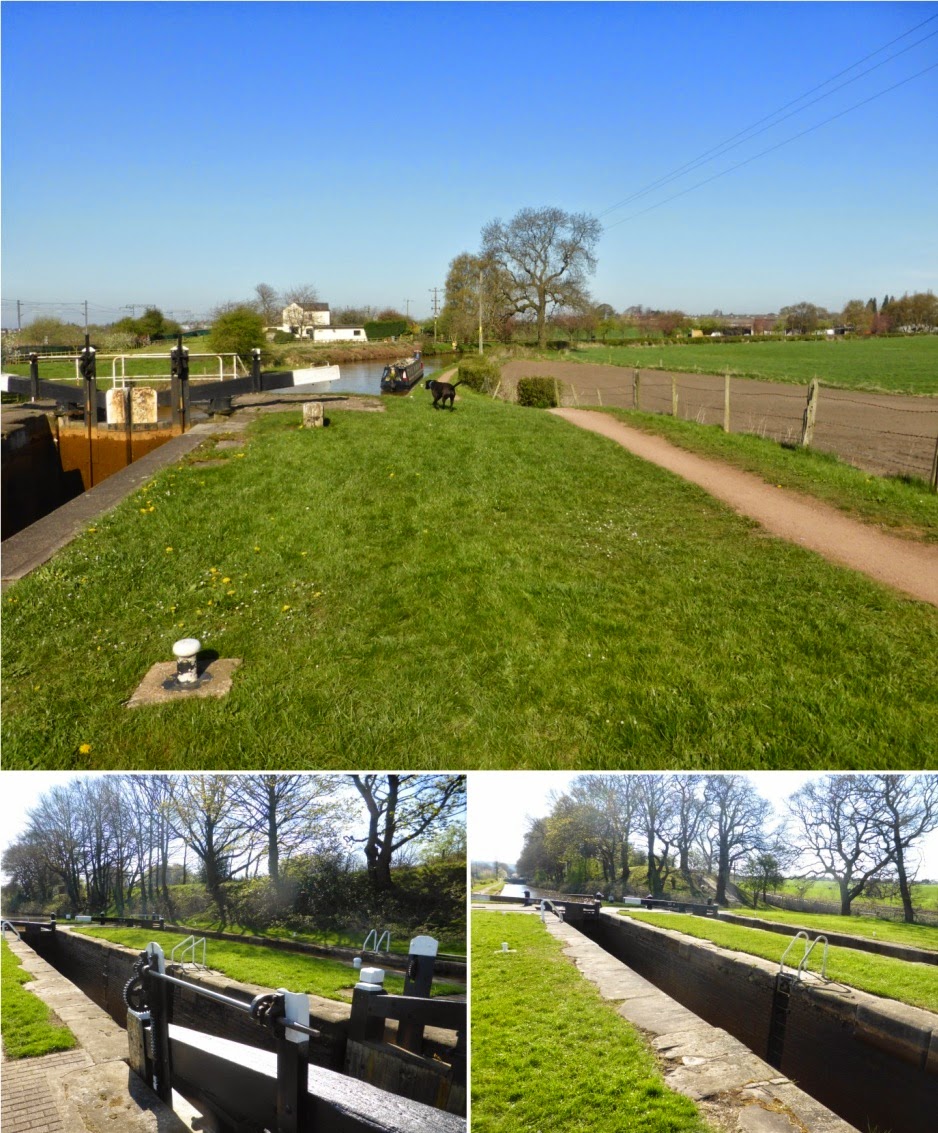 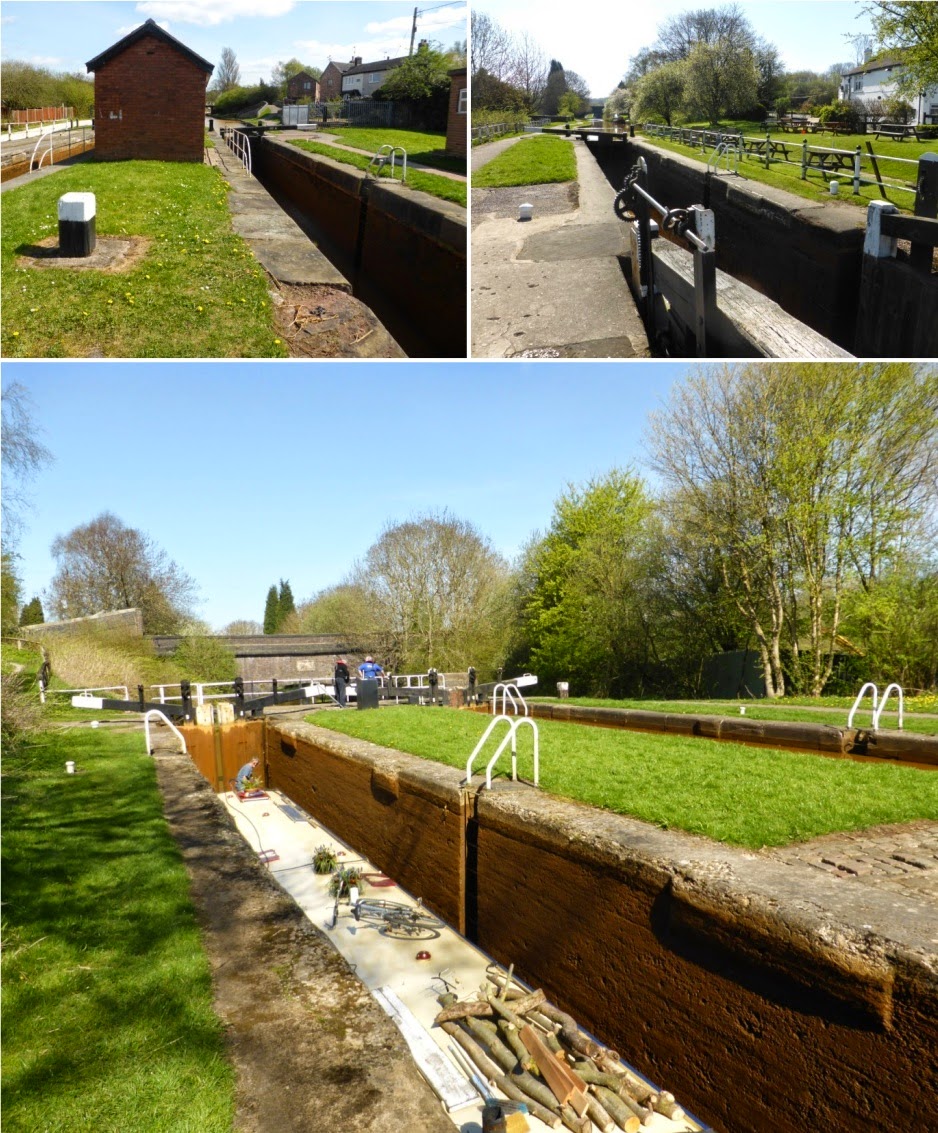