Welford (No TV or internet signal)

With good weather predicted for Friday we thought we would get through the Foxton locks and down the Welford Arm to Welford.  As the Foxton flight is two sets of five lock staircases there is a booking system to avoid the problem of someone entering the flight when someone else is already in it in the opposite direction. The Foxton staircases lift the canal 75 feet in a very short distance and are the largest staircase in the country.

We went for a little walk in the morning to have a look at the site of the Foxton inclined plane.  When the Foxton staircase locks were opened in 1814 they formed part of the section of canal that linked the South to the North; unfortunately the locks were narrow beamed and remain one of the reasons broad beamed boats cannot get between the North and the South without being transported by road for several miles.  The Foxton inclined plane was built to allow broad beamed craft to get past the narrow locks. 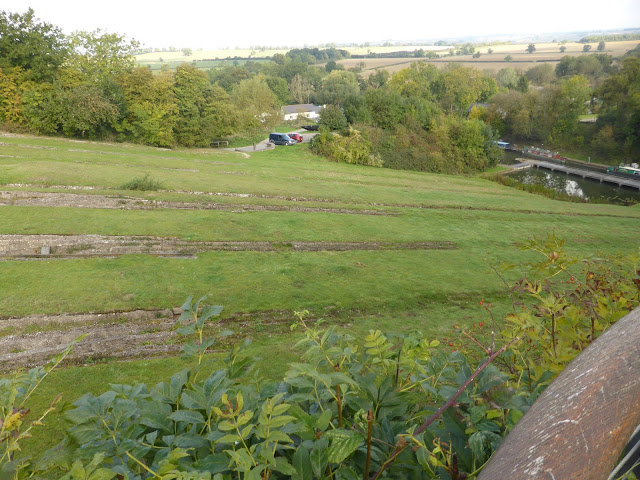 It was opened in 1900 and consisted of two caissons that would carry boats up and down the hill.  The caissons were hauled up and down by a steam engine; the steam engine house is now a museum. 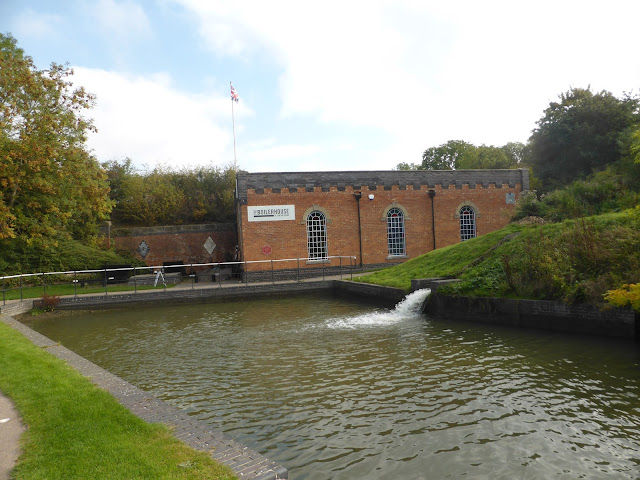 Here is one of the original pulleys that is now on display in the public car park. 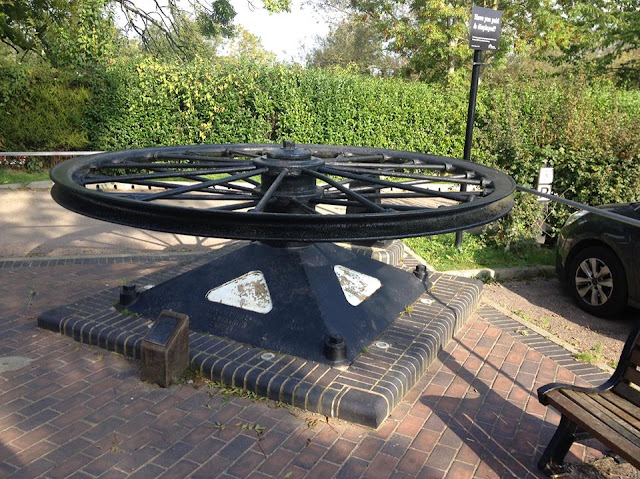 The caissons were similar to those we went in on the Anderton boat lift between the Trent & Mersey and the River Weaver.  Unfortunately, due to high running costs and high maintenance issues the inclined plane only operated for 11 years and was closed in 1911.  There is now an active restoration group raising funds to reintroduce it.  The locks take between 45 and 60 minutes to travel through whereas the plane only took 12 minutes.

We were booked in to follow Wild Kitten which was moored up outside the boaters’ bar we went to with Stuart and Cheryl on Thursday evening. 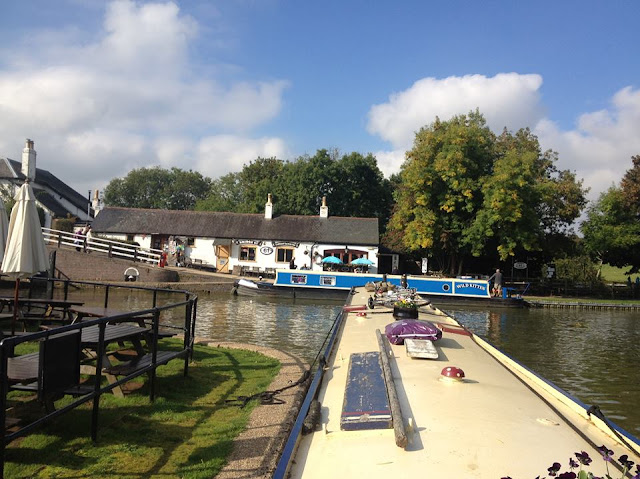 Each lock in the staircase has a side pond as shown here.  The side ponds are an ingenious method of saving water as they retain half a lock-ful of water on each lock operation. 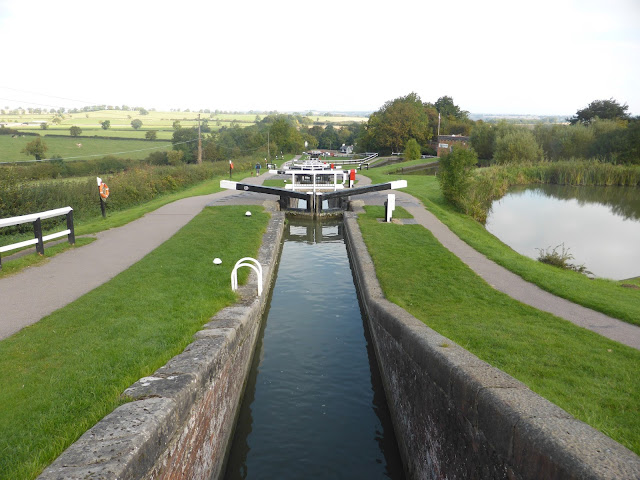 The red coloured paddle gear, in the above picture, is used to allow water to flow into/out of the side ponds (depending on whether you are going down or up) and when the lock is half full/empty the white paddle is used to fill/empty the remaining half.  There’s a rhyme boaters use to remember the order:

This is looking up the second staircase of five locks. 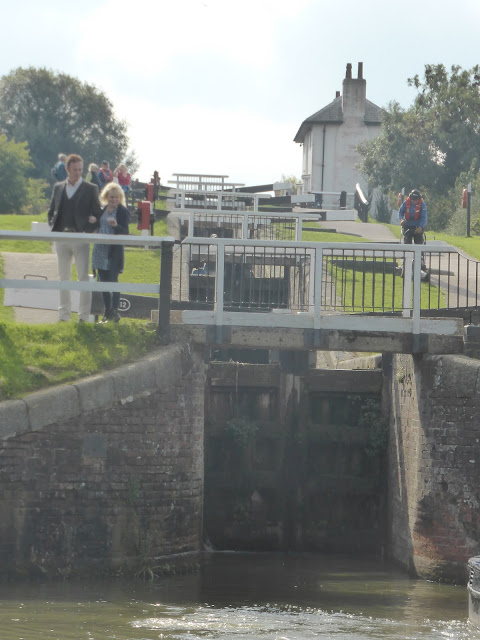 At the top lock a CRT guy was using his drag rake to remove reeds that were preventing the gates operating properly. 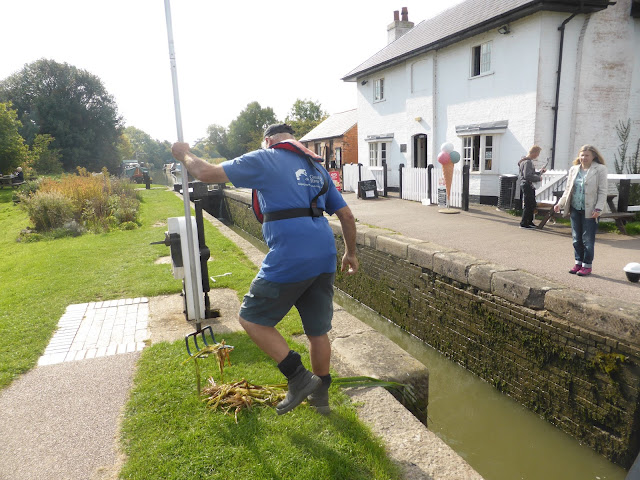 The staircase locks were leaking rather badly and almost ruined our pansies and ivy at the front of the boat. 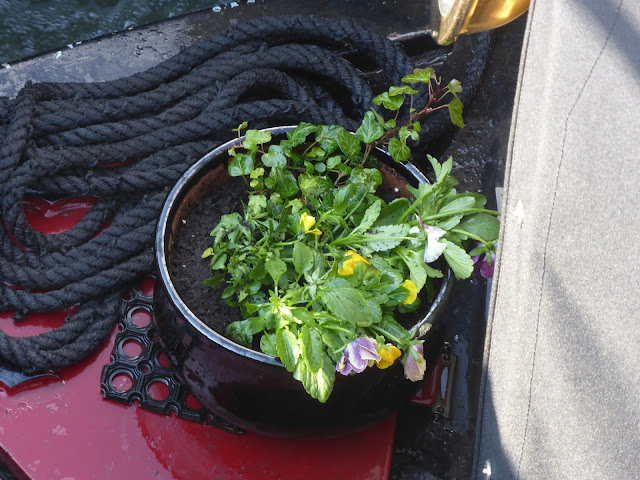 The next few miles, which were the summit of the Grand Union Leicester Section, were amongst the most rural that we have ever been on – we hadn’t realised how rural Leicestershire was. 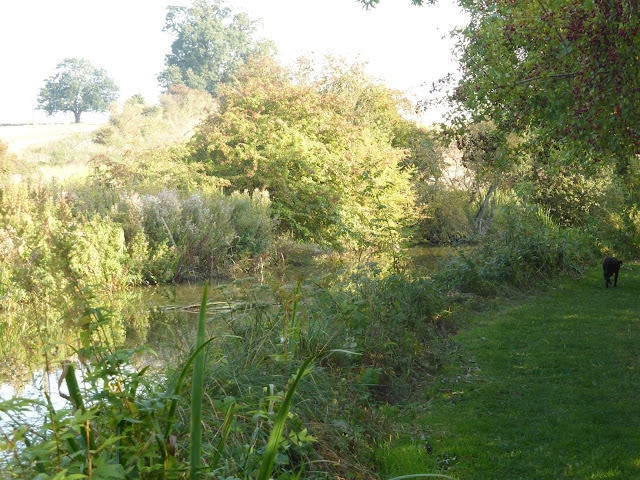 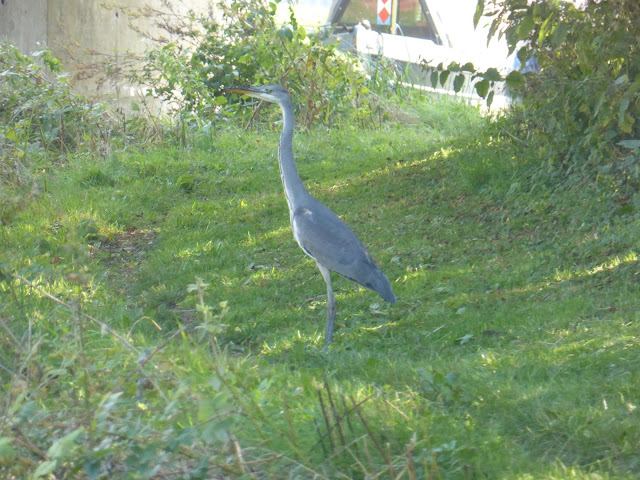 We went through the 1,170 yard long Husbands Bosworth tunnel… 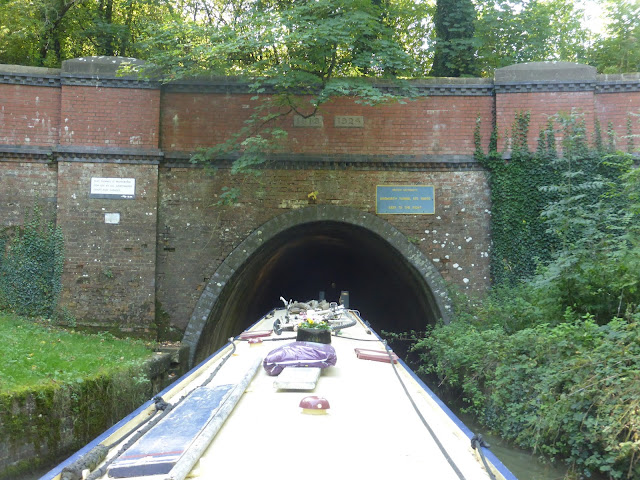 …and I saw a fish this big. 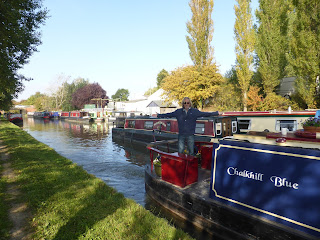 We reached the junction with the Welford arm which is only 1 ½ miles long but well worth a visit.  Left is to Welford and right on down South to Braunston. 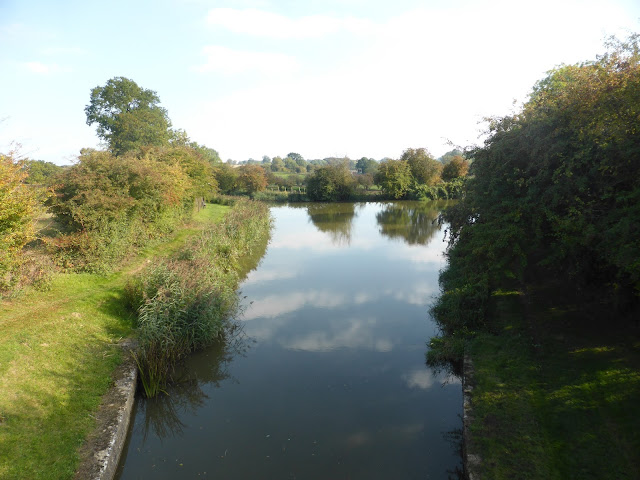 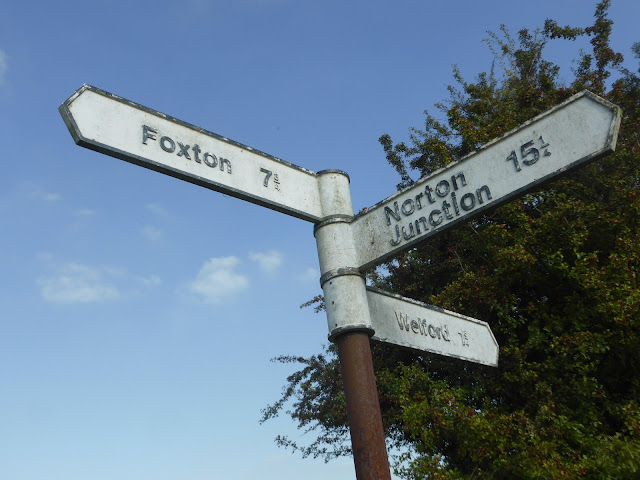 Near the end of the arm we went through the site of an old wooden lift bridge.  The stump on the right is all that remains of it now. 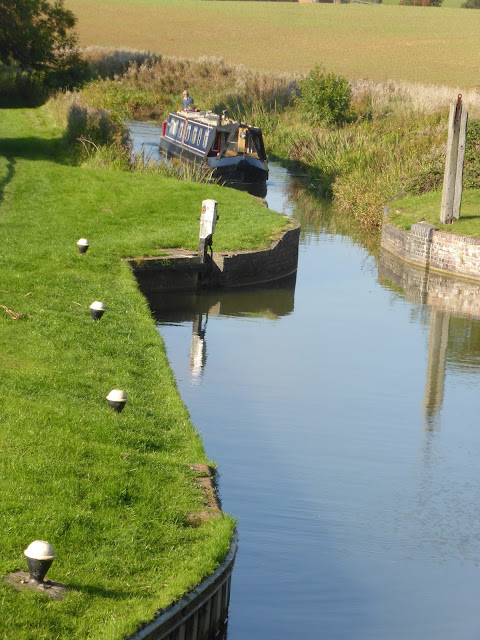 This is an old photograph of the original bridge. 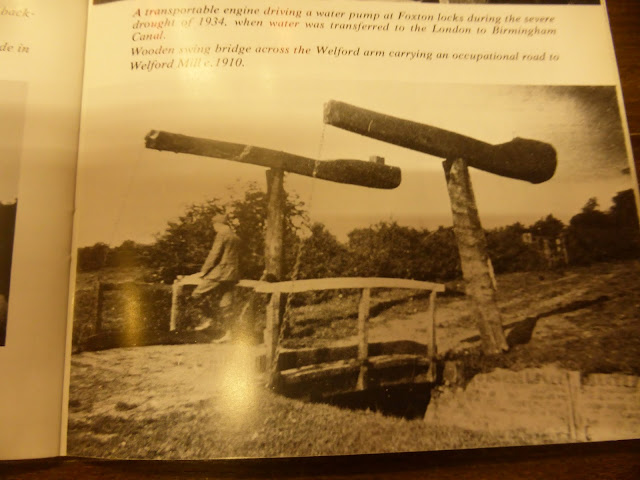 Practically at the end of the arm is Welford lock which is one of the prettiest we have been through. 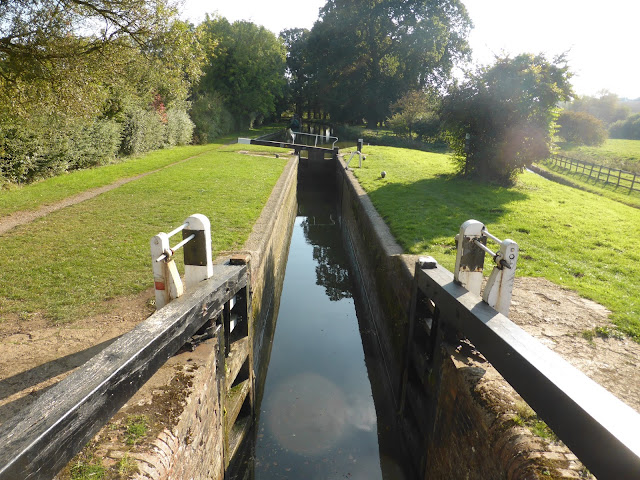 Karen caught me steering with my foot.  I can't reach the bilge pump and tiller with both hands at the same time so have to use a foot and a hand. 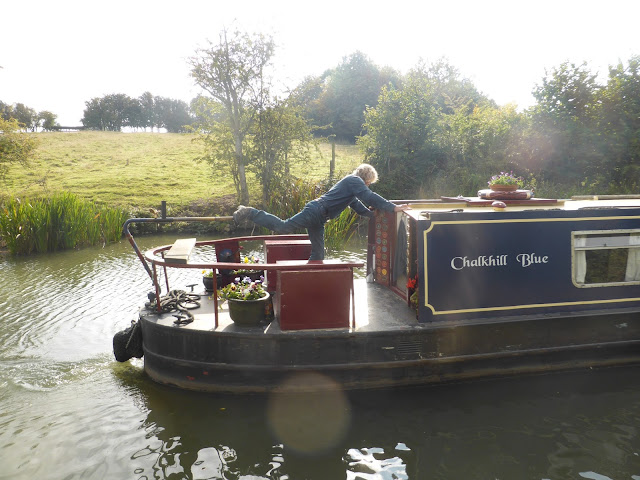 This is the basin at the end which is a few hundred yards from the middle of Welford. 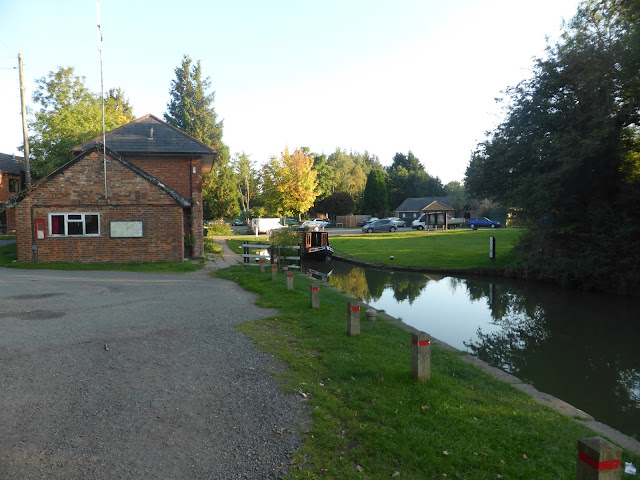 The wharf at the end is now a busy pub so we had to visit it especially as we knew the people who were already moored there and they were going in too!  Unfortunately there was no TV or internet signal when we returned to the boat so we couldn't see the All Blacks game. 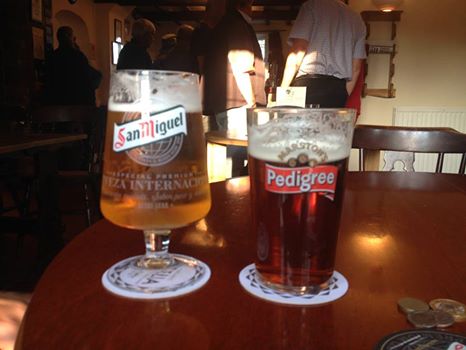