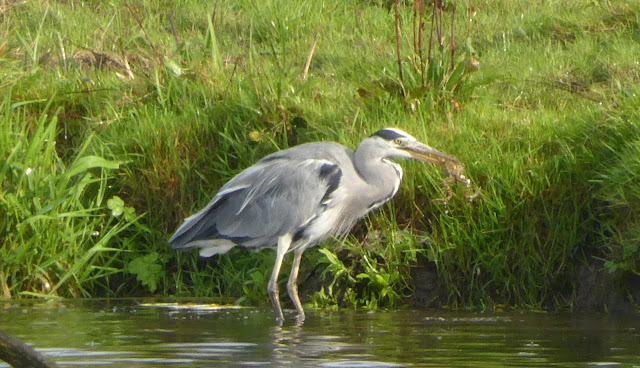 Our mission for Tuesday was to get to the end of the Trent & Mersey canal, go down the River Trent for a few miles and then turn South up the River Soar to Zouch.  We went down a couple of locks and then we hit Shardlow.  It used to be the largest inland port in the UK but now a lot of the old wharves and warehouses have either been converted to apartments, museums or lie derelict.  We always refer to it as “The famous inland port” as if we have never been there before and are surprising each other with our knowledge – in fact this is the fifth time through this year.  We stopped to fill up with water and then proceeded through the flood locks where the warning lights were showing (or rather not showing) that it was safe to go on the Trent and Soar. 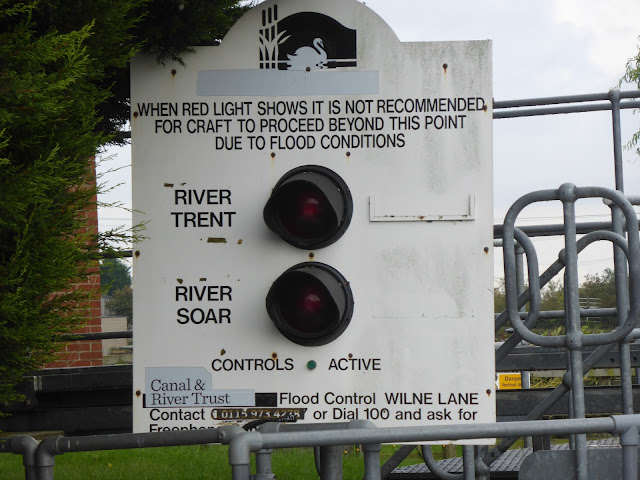 At the base of Derwent Mouth lock was further proof that water levels were fine – well down the ‘green for good’ mark. 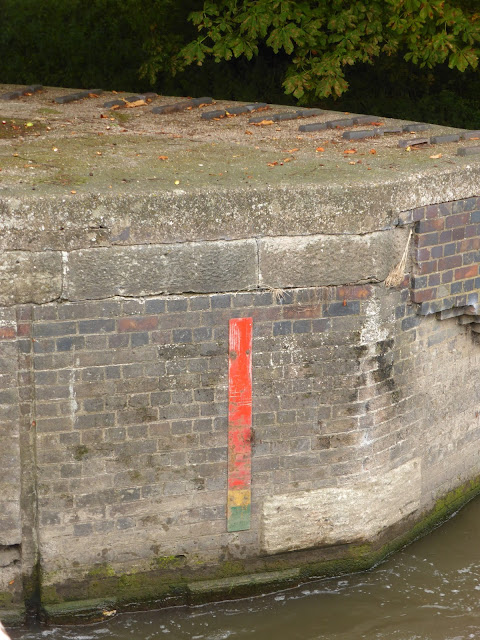 Derwent Mouth lock is the end of the Trent & Mersey canal which is 93 ½ miles from Preston Brook at the other end.  This is the final mile marker and if you have read recent blogs you will know that each marker shows it is 92 miles between Shardlow and Preston Brook.  As this point is east of both places you have to subtract the 1 ½ from the 93 ½ to arrive at 92. 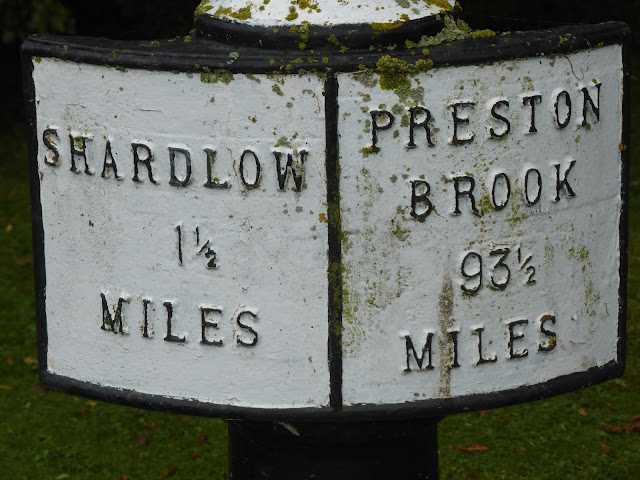 Passing through Shardlow Karen was tickled by this garden ornament. 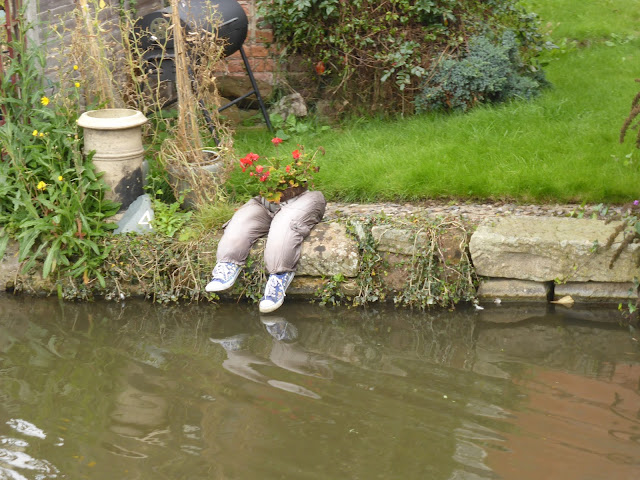 Soon after joining the River Trent we went under the M1 – if you’re driving between junctions 15 and 16 you can see the river but I suspect most people don’t notice it, let alone see a narrowboat on it. 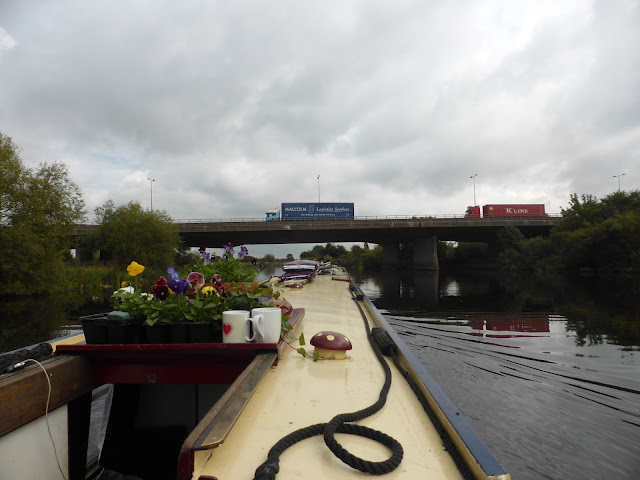 As we were on the river we all wore life jackets and Buddy was more than happy to have his on. 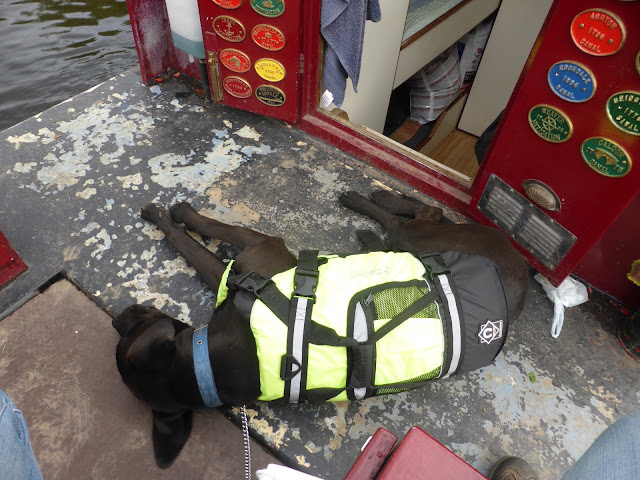 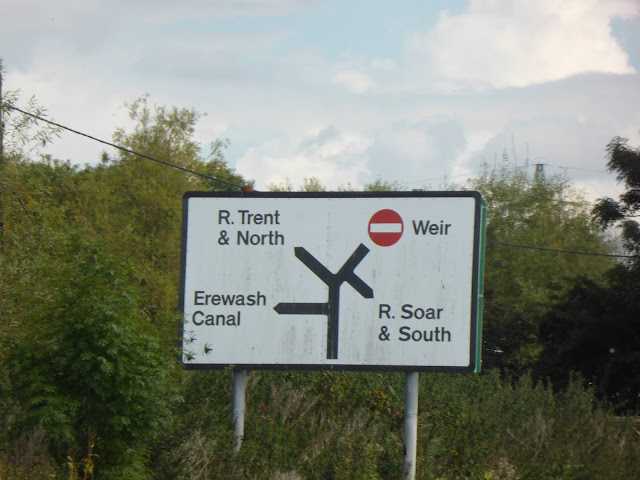 To the left, under the arch, is the entrance to the Erewash canal that we explored in June this year. Straight on is the Beeston cut that runs into the Nottingham canal through Nottingham.  We continued right on the Trent and then right again on to the River Soar avoiding the very wide weir on the Trent. 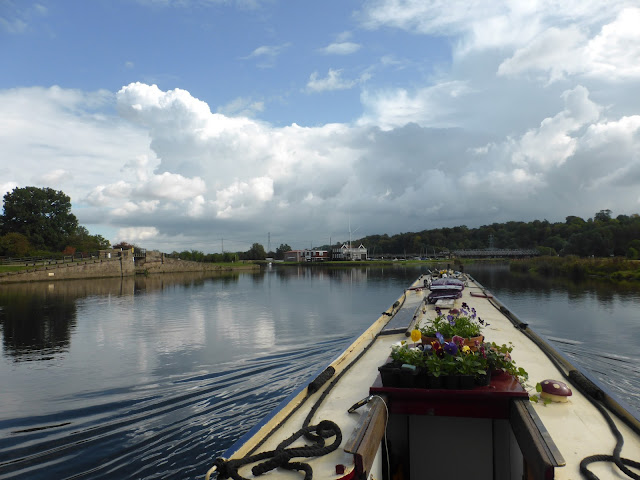 At Ratcliffe on Soar we went through Ratcliffe lock which is the 1,000th lock we have been through since moving aboard on 3rd November last year.  Once we were through Kegworth we were into pastures new as we haven’t been beyond the town before.  The water was very clear and these cows were enjoying it.  We also ran into flocks of Canada Geese which we haven’t seen for a while. 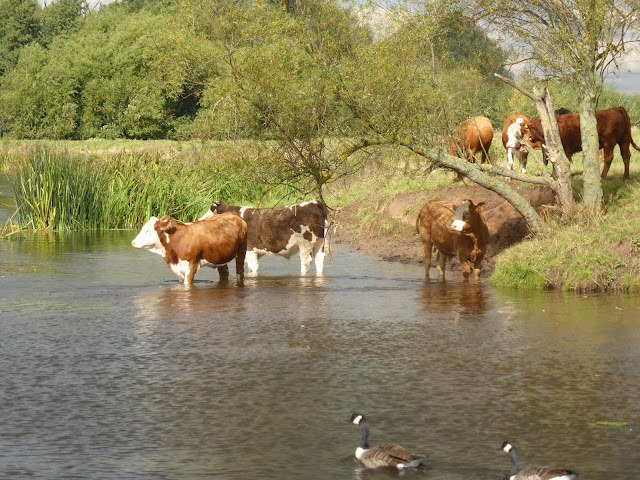 This cheeky fox watched us go through Kegworth Deep lock. 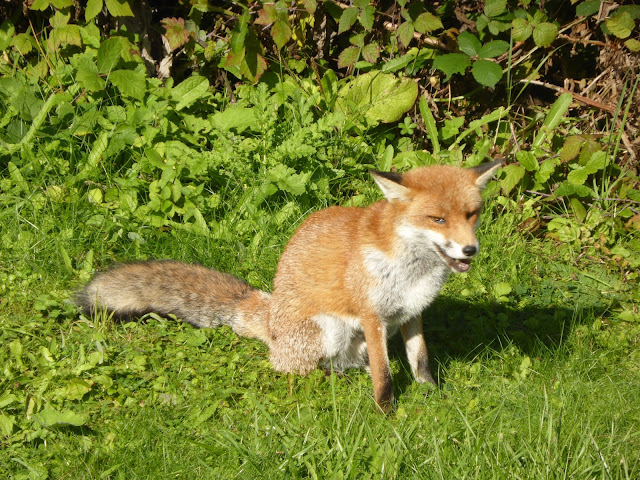 Karen tried to get a picture with Buddy, the boat and the fox but the fox moved away as she got into position but you can just see him by the bollard on the old Kegworth lock just where the line of shadows start. 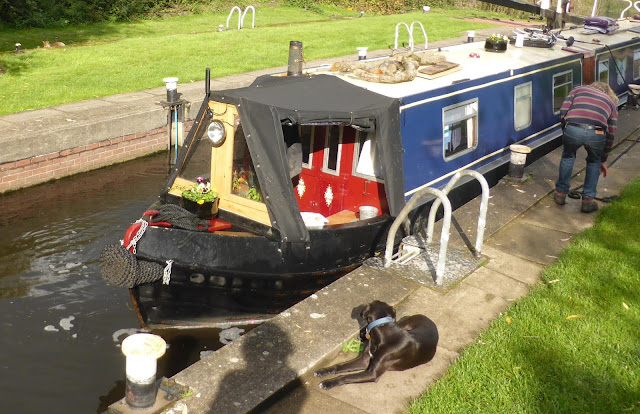 A couple of locks on the Soar were relatively new, having been built 40 years ago as part of a flood relief scheme.  The old ones had been filled in complete with their lock gates. 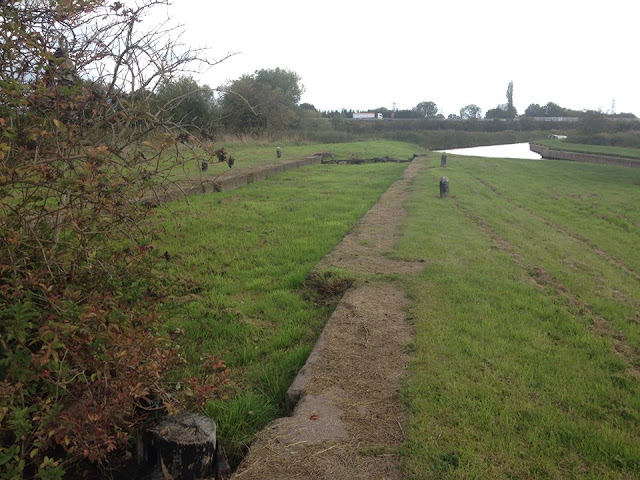 We saw several kingfishers and herons as we were back on the river which was also a lot wider than we anticipated.  One heron had caught a frog as shown in the picture at the top of this page. 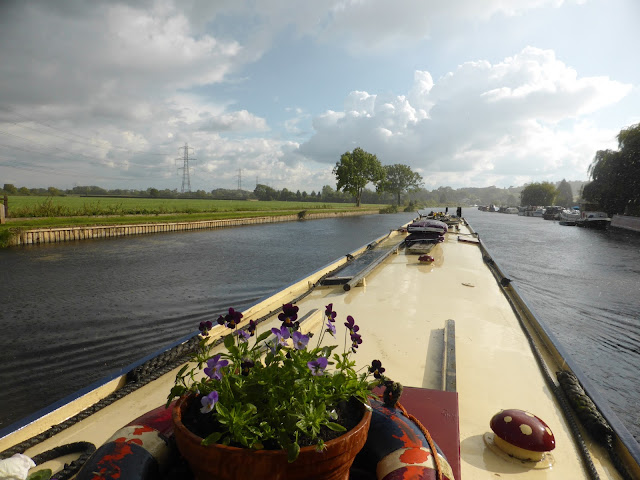 We had a couple of sudden heavy rainstorms that didn’t last long fortunately but made Buddy hide under our back seat. I must point out that we do offer him the opportunity to go inside but he never accepts unless it's dinner time. 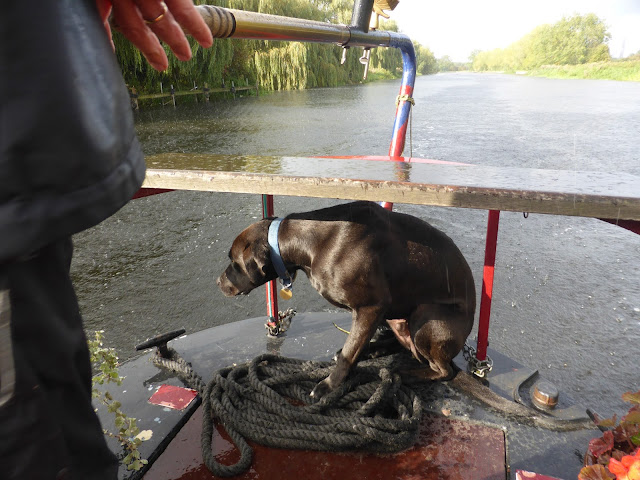 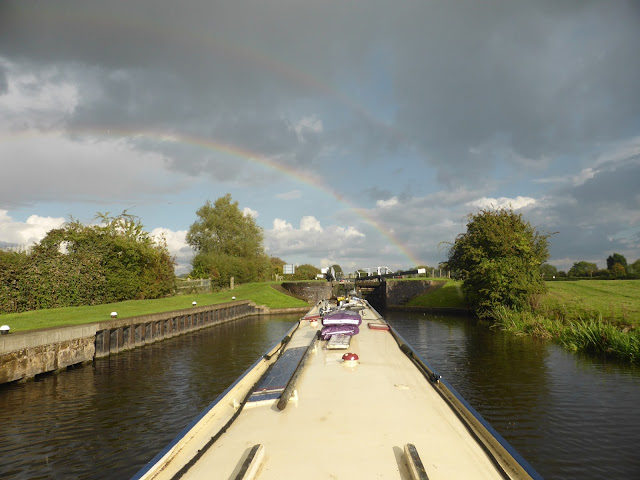 …and this is where we moored for the night near Zouch… 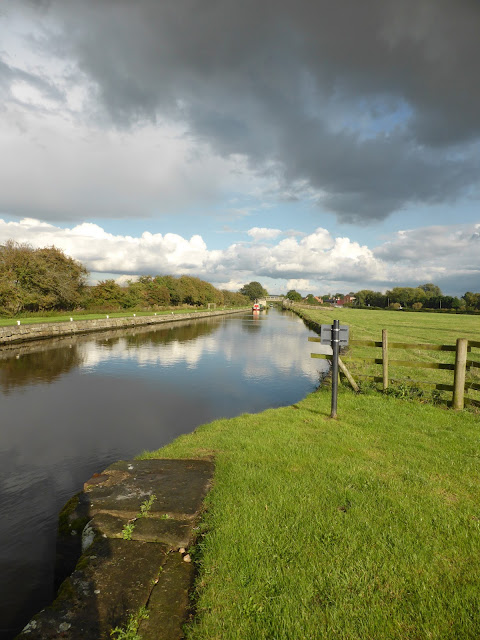 …and these are the ten locks we went through today (although four don’t count to our tally as they were flood locks and were open for traffic to pass straight through). 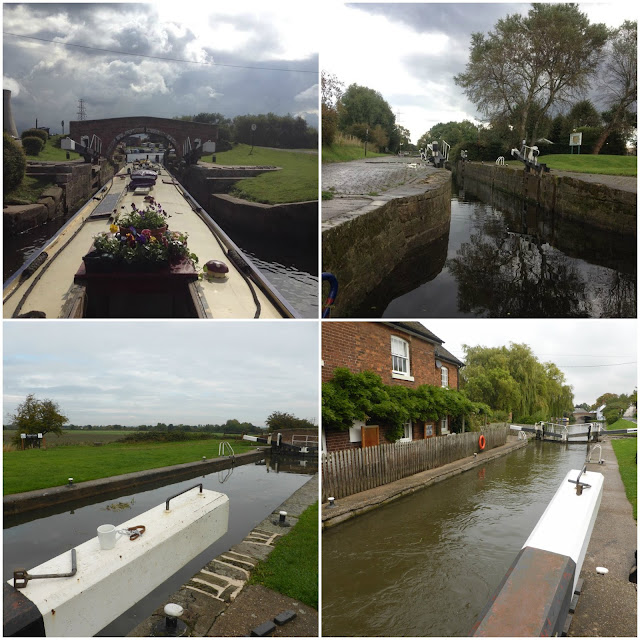