We cruised to Hockley Heath first thing on Saturday as we needed to find a post box.  We left the tow path and came out right opposite a McLaren garage – it’s not every day you see one of these on the canal. Soon after we set off again we came across another lift bridge.  This was manually operated again but was a lot easier than the one Karen had to lift at the end of our long locking day on Friday. 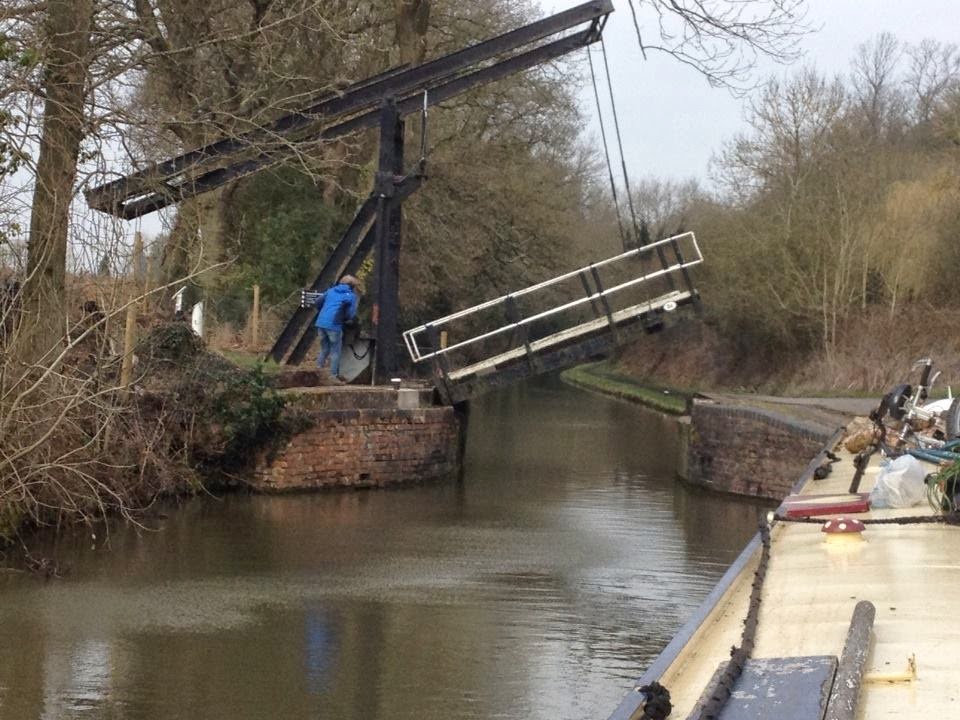 Our main alternator started failing so we had to stop and call out the Canal & River Rescue - the waterways equivalent of the AA and RAC.  Fortunately we were in a nice and quiet remote spot so we could settle in and watch the two six nations matches.  The engineer patched us up so we could continue to cruise until a replacement alternator is fitted in a few days.

We were pleasantly surprised to wake to a dry Sunday morning – the forecast had led us to believe it would rain hard until the afternoon.  We are generally really impressed with the local forecasts but fortunately this one was a little awry.  Karen wanted to try our first roast in the slow cooker so set it going and then we got on our way.

The tow path was really muddy and, ironically, Buddy fell in the canal trying to avoid a puddle.  Here he is after he dried out a bit. 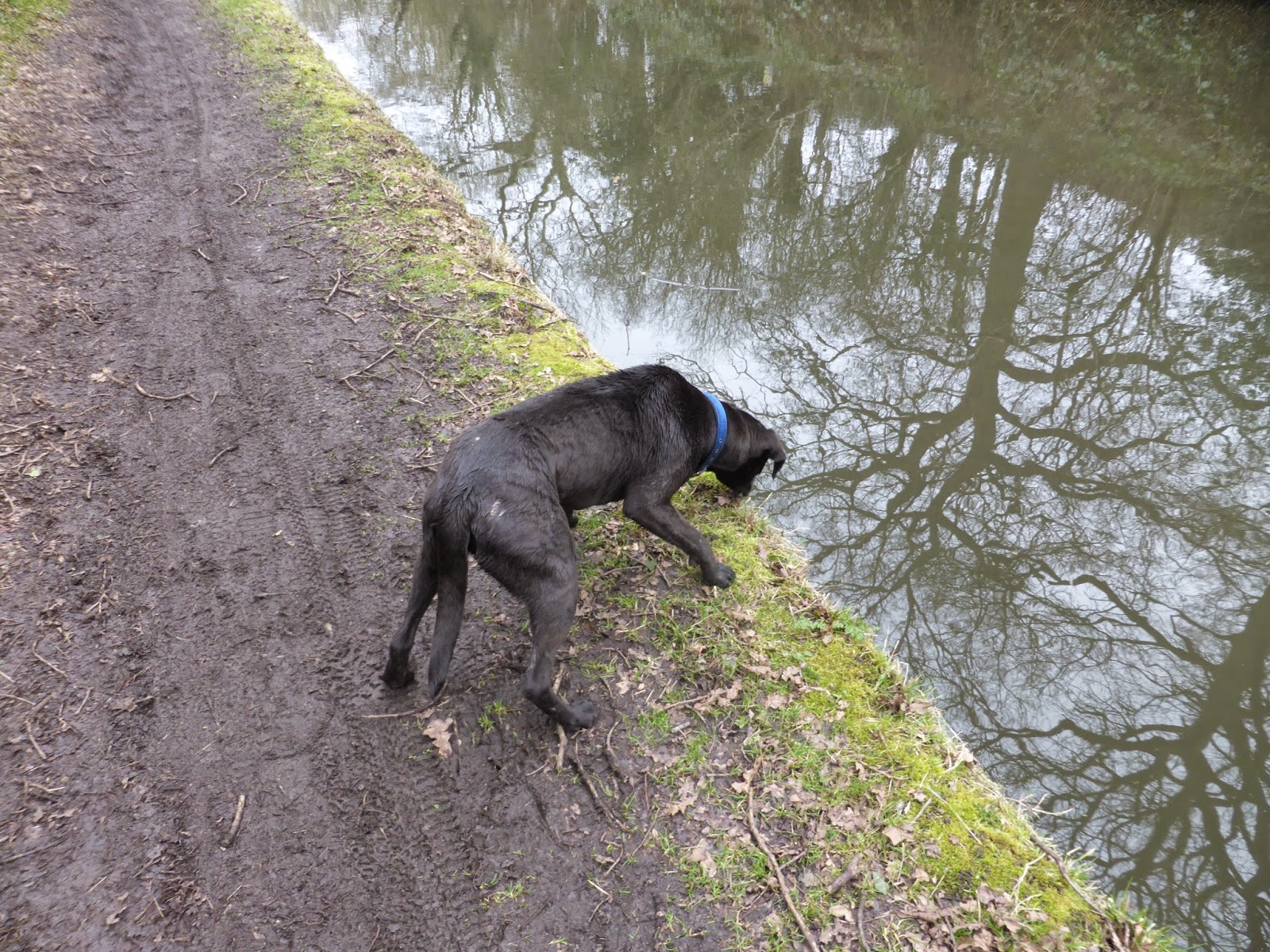 After a while we went through Brandwood tunnel which is not too long, only 360 yards, as we could see the exit portal from the entrance. 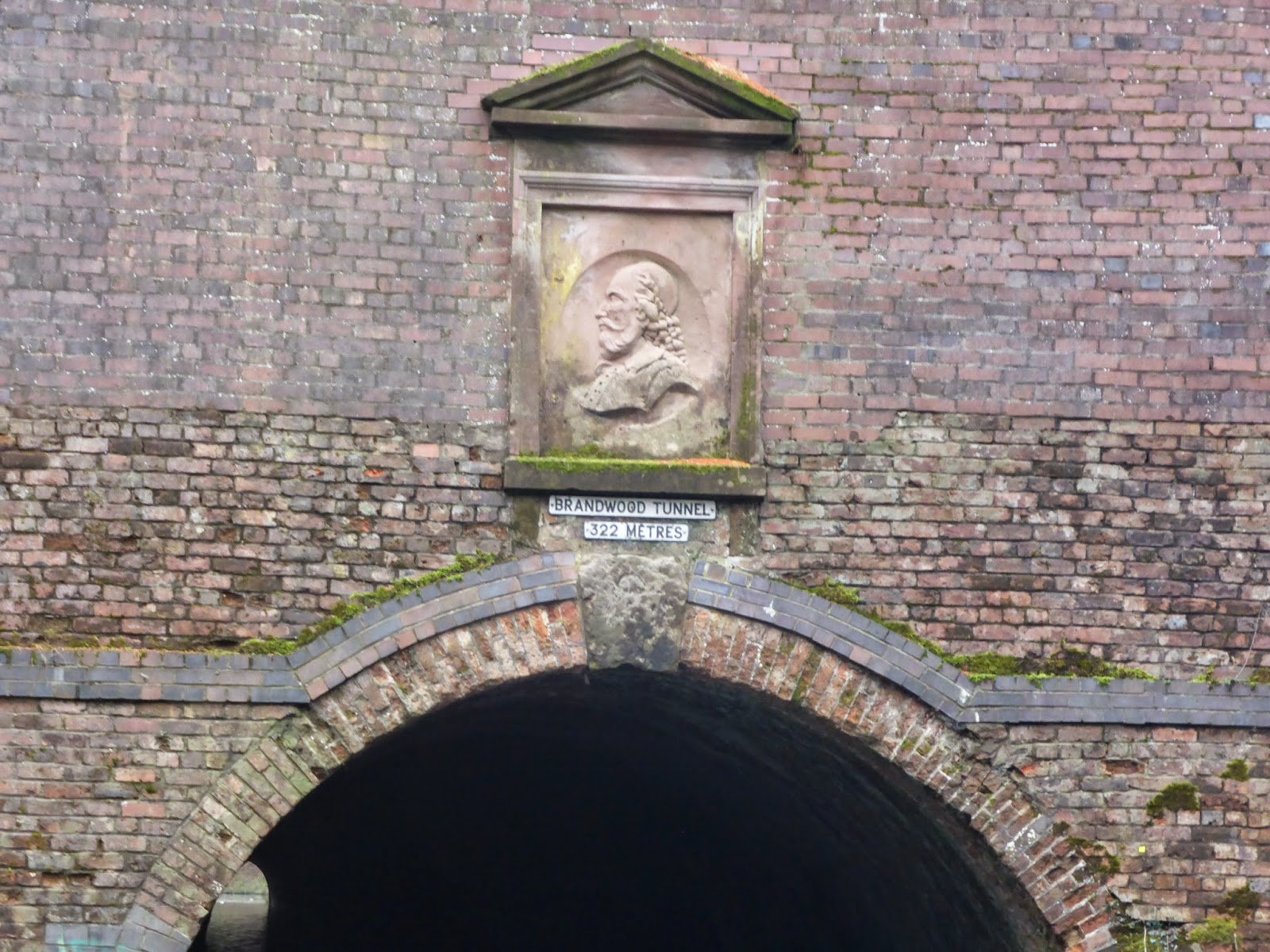 We then came to a lift bridge where the boater has to control the traffic lights to stop the road traffic. 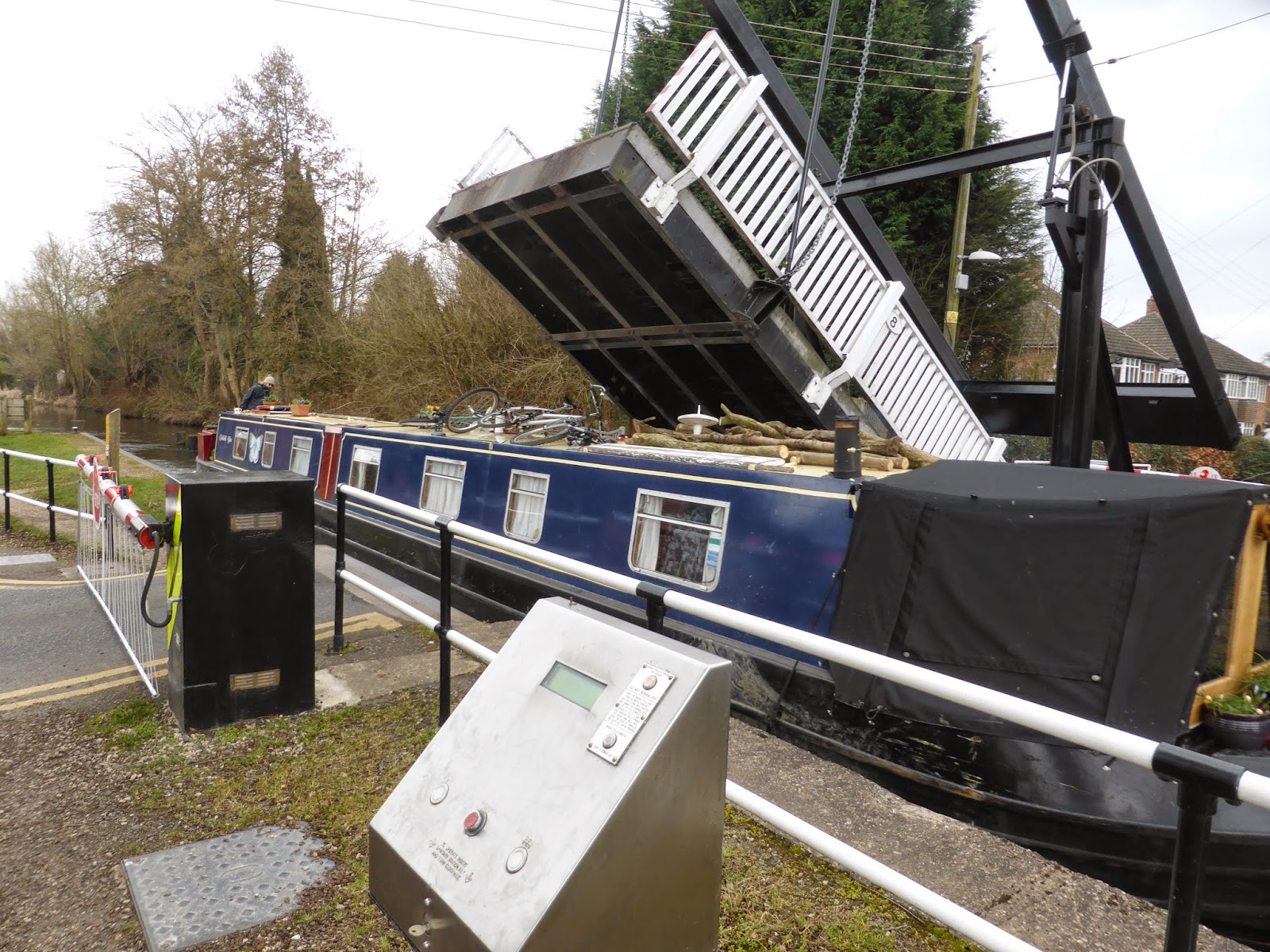 Kings Norton is where the northern end of the Stratford canal meets the Worcester and Birmingham canal as it heads south out of Birmingham down to meet the River Severn at Worcester.  This is the canal that has been closed for a few weeks at Gas Street in Birmingham because of a leaking aqueduct.  Fortunately the leak has now been repaired and the canal reopened – we could tell as we saw eight boats on the move during the day.  Just before the junction is a guillotine stop lock – shame about the graffiti. 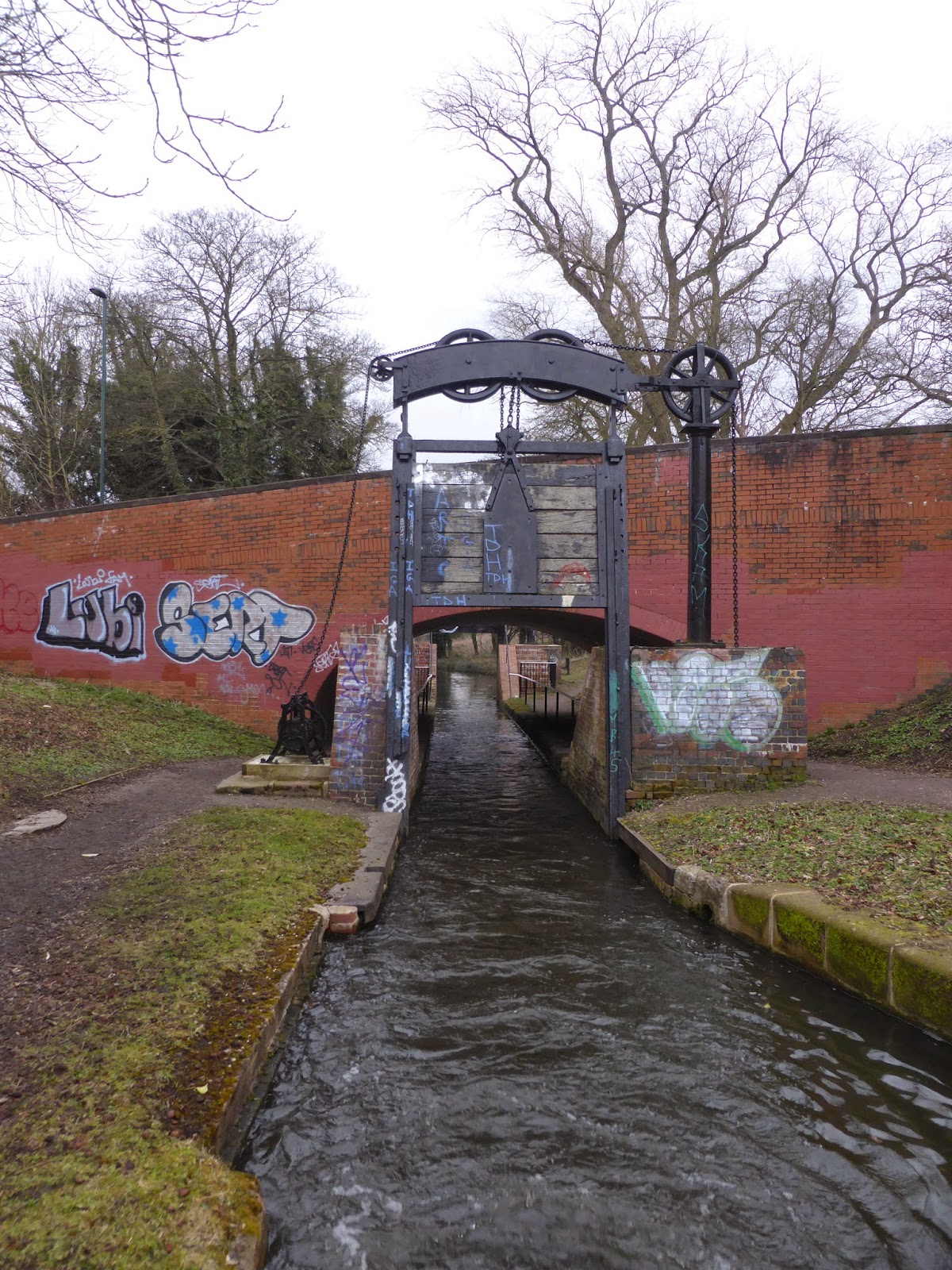 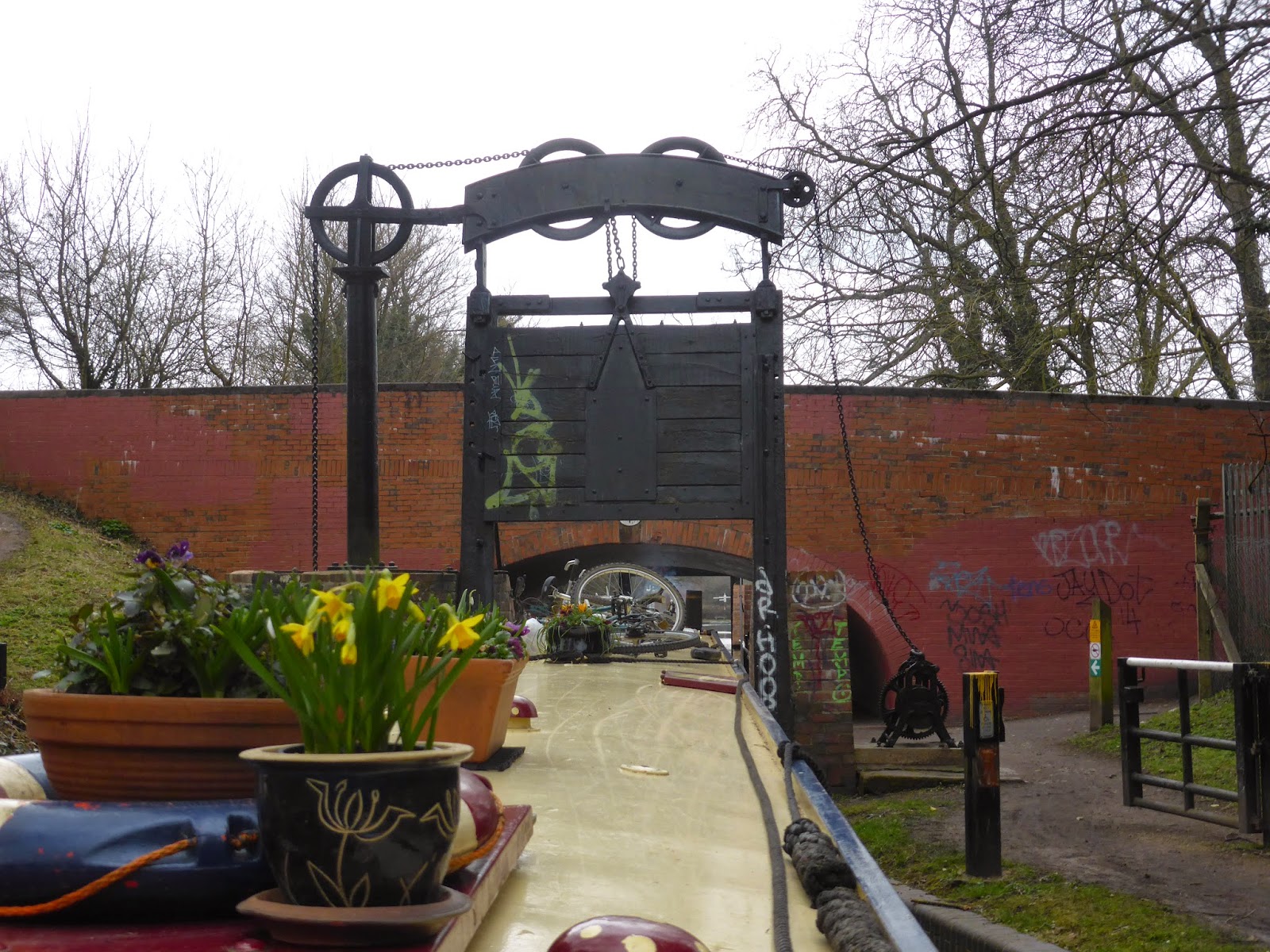 We met two boats at Kings Norton junction – you always seem to meet boats at the most difficult places like junctions and blind bridges on corners. 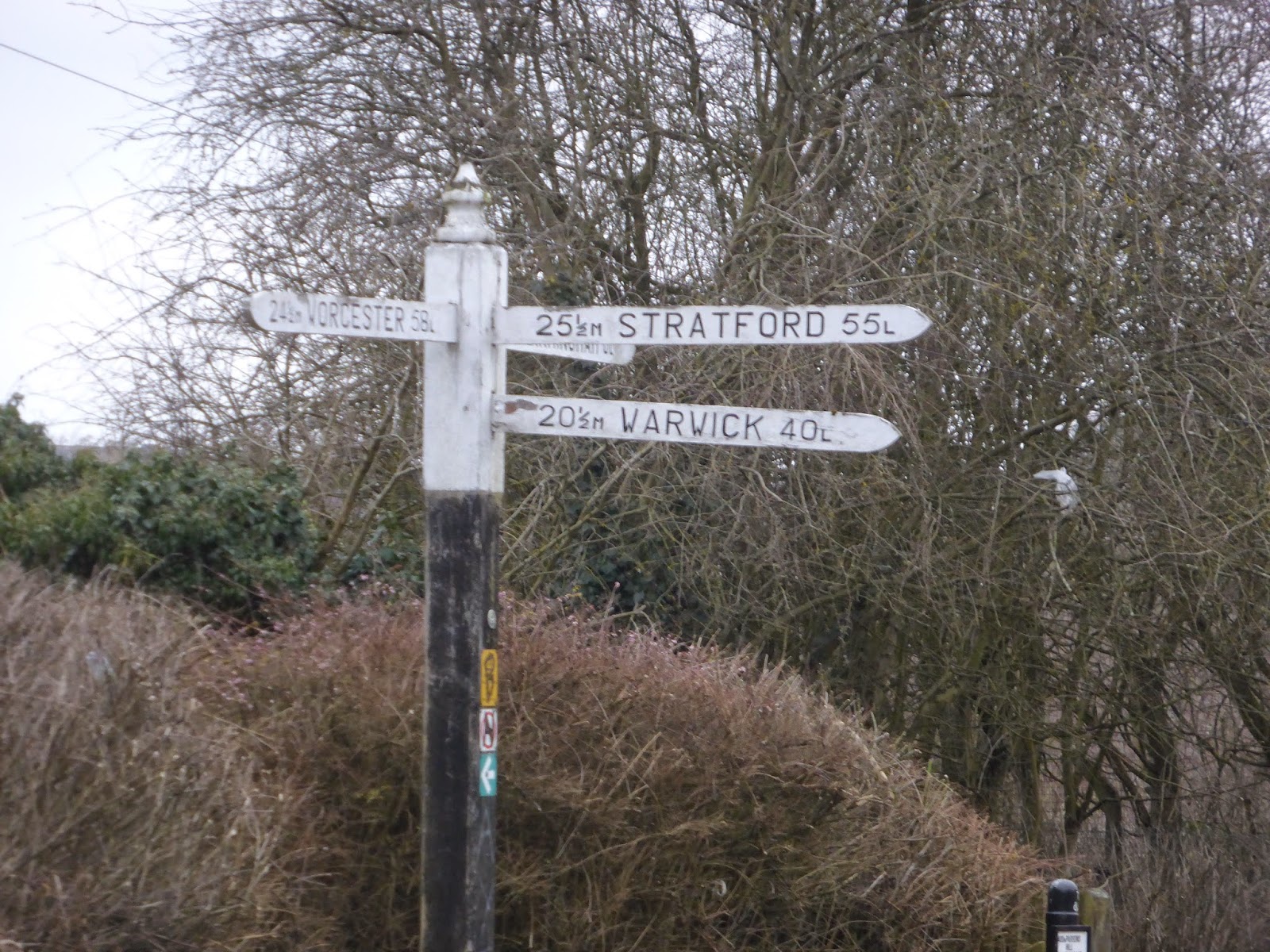 Just south of Kings Norton junction is Wast Hill tunnel which is 2,726 yards long.  It takes about 45 minutes to go through and takes quite a while before the light at the end of the tunnel can be seen.  Our friend Alison was born in Kings Norton and went to a school above Wast Hill tunnel. 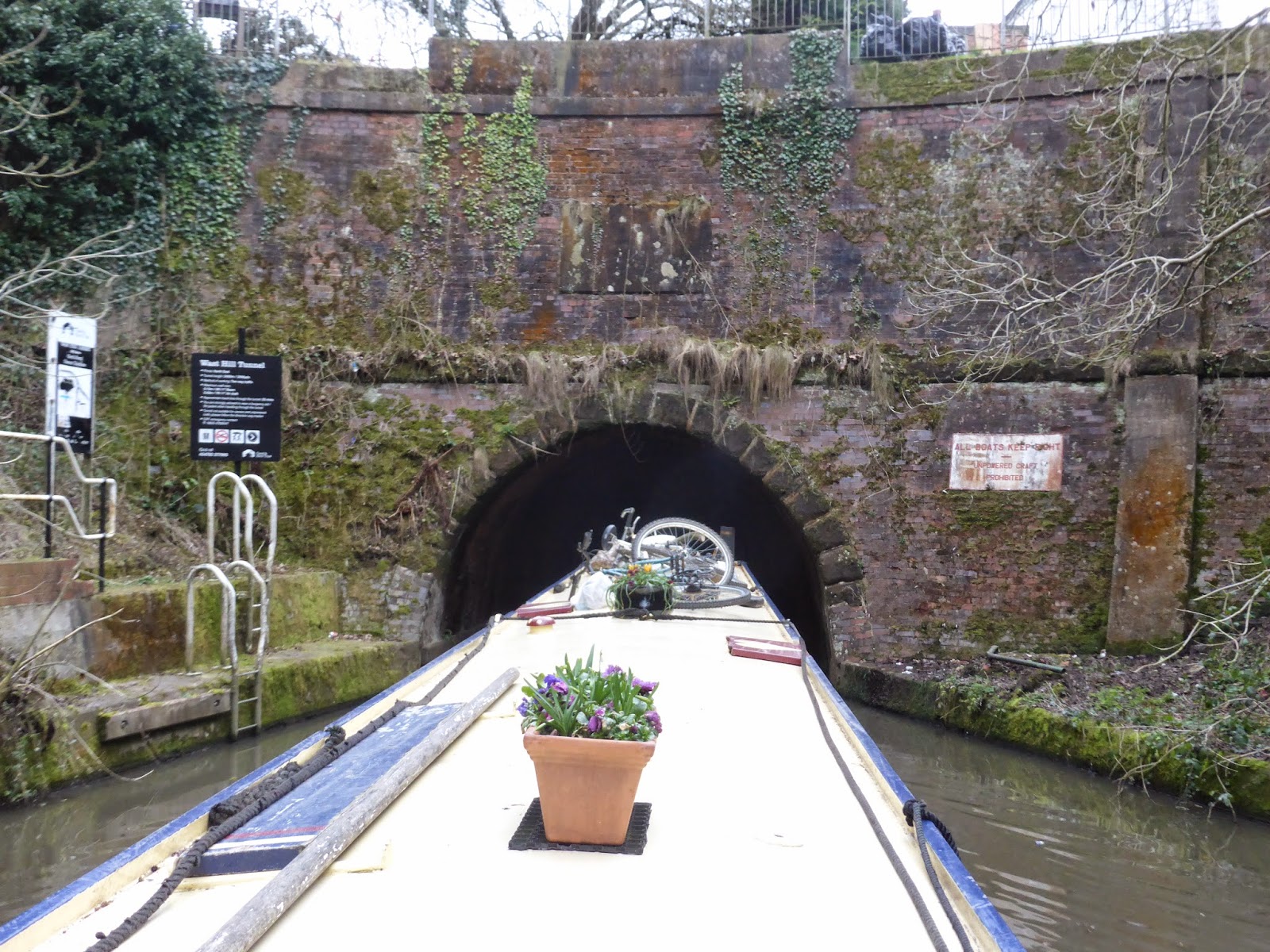 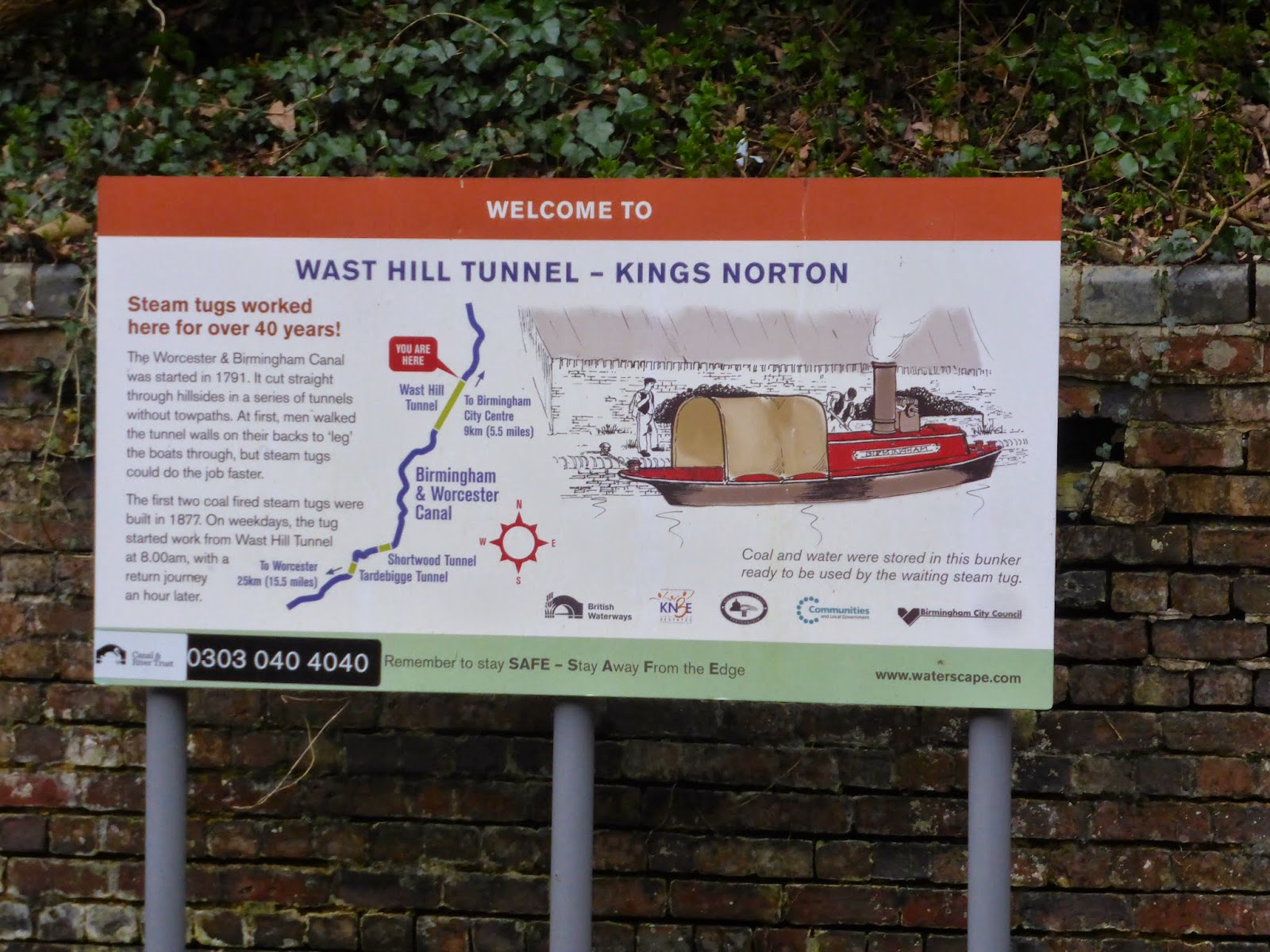 We moored up in the late afternoon at the end of a long line of boats. 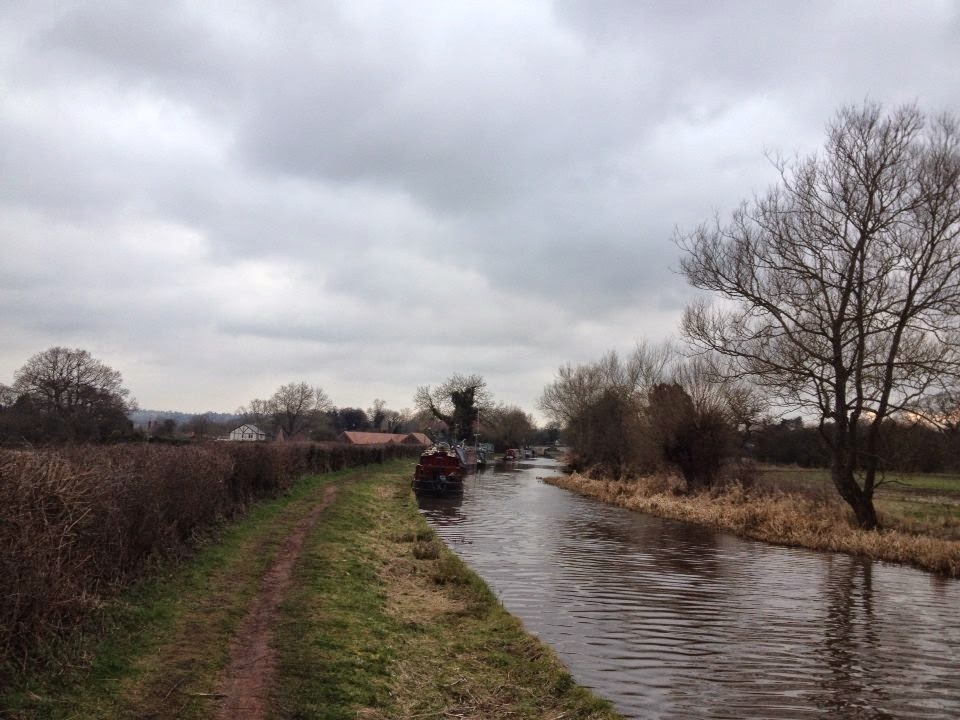 Judging by the number of boats we assumed the local pub must be good.  Karen rang them to check they would take Buddy and all was good so off we went.  As we walked to the door, a smoker told us that dogs are not allowed in the pub.  Karen told him she had rung them and they said it was OK.  He was quite insistent so Karen went in to check and was told dogs definitely not allowed.

Normally we wouldn’t frequent a pub that doesn't allow dogs but it was really warm inside and we both felt like we had been in the coldest day of the winter so far.  So we walked Buddy back to the boat and went back for a couple of drinks at the pub.  As we walked in the locals at the bar started laughing and pointing at the barman.  He apologised as he misunderstood Karen’s accent and thought she was asking if they served food! 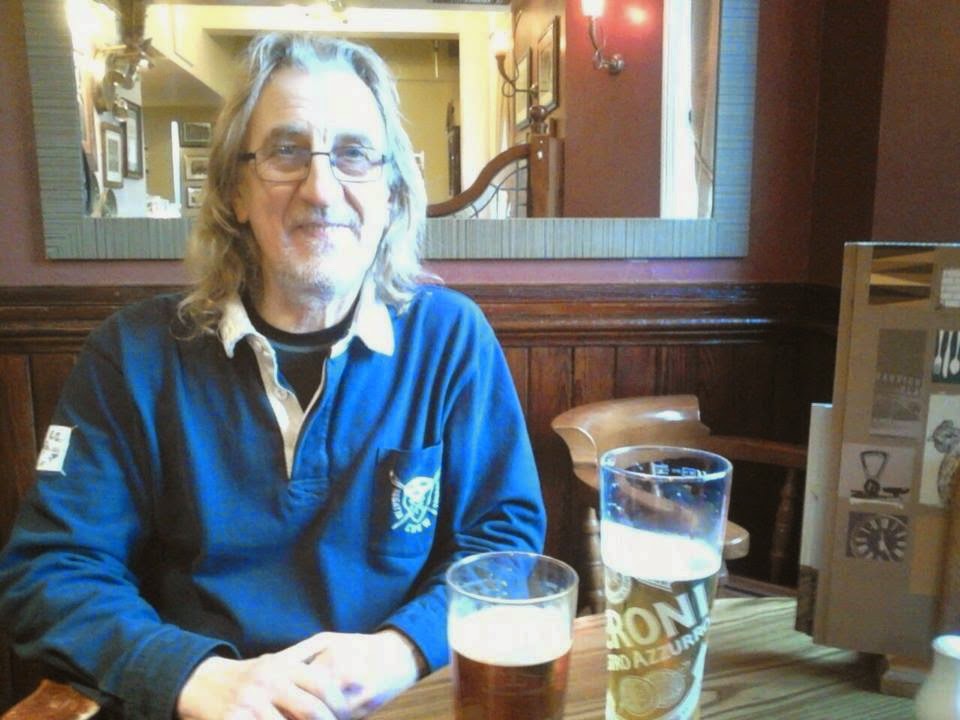 We have 40 locks in 15 miles on this canal before we turn onto the recently restored Droitwich canal.