Strines (Well I did say it was like Stonehenge)

On Monday morning we packed a picnic and set out on a circular walk I had planned to take in High Moor, a 1,362’ hill overlooking Macclesfield.  First, we had to get through Disley and across the A6 before hitting the open countryside for the rest of the walk.  For some reason I took the wrong footpath out of Disley and found ourselves on the Gritstone Trail, a 35-mile path running between Disley and Kidsgrove.

We had a quick re-plan and decided to visit Reed Hill (just under 1,300’) instead and find the Bow Stones.  I had mentioned these to Karen the other day and said they were like Stonehenge only fewer stones.

A little way out of Disley we walked through a lovely area of meadowland that had had a lot deciduous trees planted in it.  There were white butterflies everywhere, nearly all orange tips, but no other species other than the odd speckled wood.  In fact, we saw no other types of butterfly all day other than a solitary holly blue – we had hoped to see small coppers, green hairstreaks and maybe a small heath.

Anyway, at the entrance and exit to this area were massive kissing gates – the tallest we had ever seen.  I said once that our family has a custom of always kissing the next person coming through a kissing gate.  After reading this Mike made the comment that he would always go first on walks with us.  He wouldn’t have had to worry on this walk as even he isn’t as tall as these gates 😊


A bit further on we met a Japanese girl walking towards us.  She stopped us and asked if we knew how to get to Lyme Park.  I explained we were passing near it and that she was going in the wrong direction.  It was a bit difficult to explain the way to go, especially as her phone was in Japanese text mode so I said she should walk with us and we would get her to the turning that she had missed and where she would only have ½ mile left to walk to the house.

We reached the point where our Japanese companion had to turn off and we could see The Cage which was built in 1580 as a hunting lodge and banqueting hall within Lyme Park.


We continued walking up hill and before we reached the Bow Stones, we passed this newly built house.  It’s amazing how planning permission was obtained to build such a place in such a remote location with amazing views. 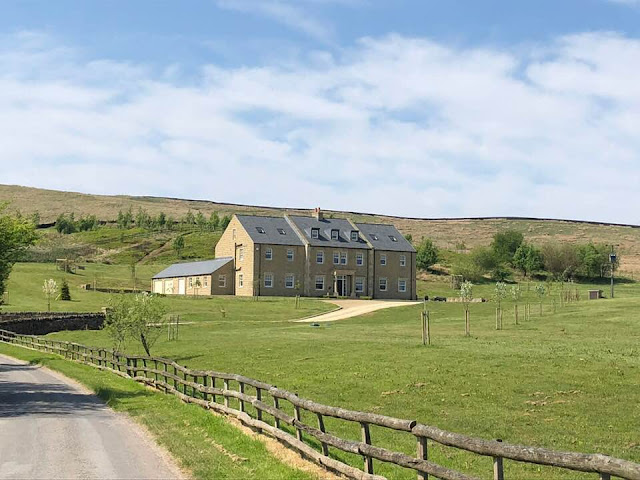 I suppose Karen was right, but we had a good laugh about it.  These were originally crosses, erected in the 9th century and would have been used as boundary stones as well as places of worship.  The cross members were probably destroyed during the reformation.

We soon reached the top and stopped for lunch.  Unfortunately, it was a fairly hazy day, so we couldn’t see more than about 15 or 20 miles.


To make sure we had a circular walk we went through Lyme Park estate on the way back.  The house was Darcy’s house, Pemberley, in the BBC’s version of Pride and Prejudice.  The lake in front of the house was where Colin Firth had his famous dip before being seen by ‘Lizzie’.

We walked through a larch wood and in the middle came across The Lantern.  This was also built in 1580 as a belvedere.  A word I knew but not its meaning: a belvedere is a building built to admire the view from.  My new fact for the day.


Coming out of the woods we both remarked how different the stone walls in this part of the Peak District are compared with those in the Yorkshire Dales.  The ones here are built from millstone grit and the lighter Dales walls are built of limestone (except those that are built of millstone grit of course).

The wall that made us both make the same comment

When we got home we remembered that we had thought about having a cruise.  I decided to cycle further down to see if the next spot we fancied was free, which it was.  Where we moored on Sunday was above a wooded part of the Goyt valley that housed a tissue making mill.  We hadn’t realised that it was operating 24 hours a day and I have to admit that the constant hum made it difficult for me to get back to sleep every time I woke up.  Because of this and because the spot we wanted was free, we set off. We had one lift bridge to go through and after ¼ mile moored up again.