Leigh (finally on my parents’ canal)

Sunday had seen us moored outside the Trafford Centre and the plan for Monday was to move on to Leigh or Planks Lane on the Leeds & Liverpool canal.  We needed to top up with water but had forgotten that all the water points were removed from the Bridgewater canal a while ago, hence the dash to the Leeds & Liverpool.

Before we left, a lot of boats went past, and we remembered how fast boats travel on the Bridgewater canal.  It’s understandable as it’s broad and deep and also the banks are generally made of concrete so there’s no worries about erosion.  It felt like being on the River Thames, so different to being on a tranquil, quiet, slow canal.

At about 10, a broad(ish) beam moored up behind us, a Liverpudlian couple and their adult son.  The wife came up to have a chat and told me that they had been rammed by a narrowboat earlier as it tried to overtake them with moored boats either side.  I knew exactly which boat she meant as it had nearly hit us as it went past at great speed. She was lovely and friendly but said she had to go as she was going into the Trafford Centre to do some shopping.

I went up to have a chat with then and we had a laugh that it didn’t matter if they got into trouble when she got back from shopping as they had already done the damage.  I went back to say goodbye as we were leaving sometime before midday and asked how long their pass was as I imagined the wife would be shopping all day.  He sheepishly said she was back already but when she popped her head of the side hatch we had another good laugh.

Soon after leaving we were approaching Barton swing aqueduct which takes the canal over the Manchester Ship canal.  It’s an amazing piece of engineering that few people see in operation these days, but it must be brilliant to see it swinging open to let a tall ship pass underneath.  The Barton Road bridge will have to swing at the same time as the canal aqueduct is swung.

The bridge in the far distance in the picture at the top is the M6 which many will recognise as the Thelwall viaduct, either from passing over the Manchester Ship canal on the motorway or hearing road traffic reports of closures in high winds etc.

Soon after the aqueduct we went past one of the stanking plank cranes and the massive planks that are typical of the Bridgewater canal:

We saw a couple of restored fly boats at a couple of yards during the afternoon.  These boats were built to fit the wide, but short locks of the Leeds & Liverpool canal.  Like elsewhere in the country, e.g. Shropshire Flies or Stockton Flies, they were called fly boats as they were worked 24 hours a day to transport goods. 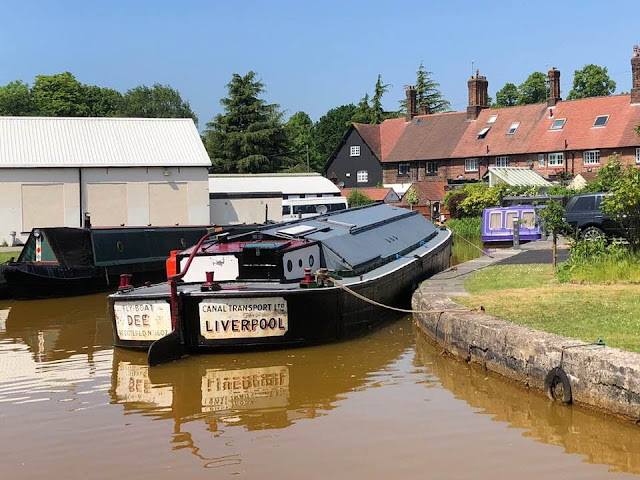 At Worsley we passed the entrances to the coal mines that were the reason the Bridgewater canal was originally built.

The canal used to run underground in the mines, so the boats could ship the coal out to Manchester’s industrial areas.  Many historians regard this canal as being the UK’s first canal, albeit without any locks for its entire length.

We were soon approaching Astley where there is a coal mining museum.  Seeing the pithead in the distance reminded me of travelling up and down the M1 in Yorkshire thirty or forty years ago when there were still plenty of pitheads to be seen near the motorway.

I have to admit that we found it a really hot day so had a couple of hours indoors when we moored for lunch and when we set off again Karen found it cooler to hang out of the hatch on the shady side of the boat:

At Leigh we left the Bridgewater canal and joined the Leeds & Liverpool canal:

This was our first time on the canal which is really quite ironic as my parents live at its northernmost point at Gargrave.  When we were on our travels in our previous boat we were too long to fit in the locks, so we had to wait for our new boat before venturing up here (oh, and the small matter of Karen going back to work for two years or so, which kept us in the Midlands 😉).

Leigh was famous for its cotton mills, many of which still stand awaiting preservation.  Here are just some of the mills we passed: 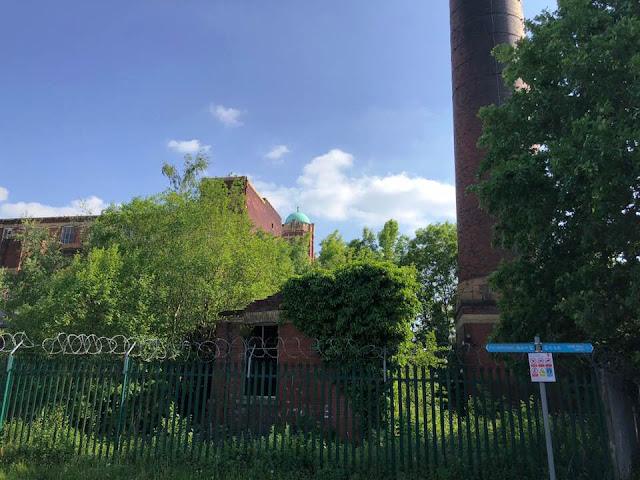 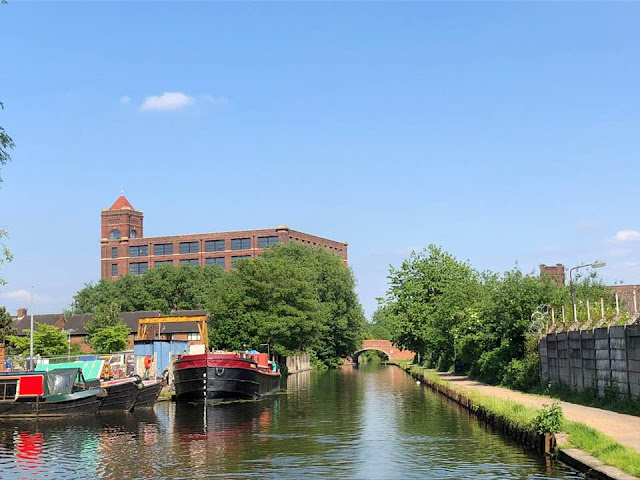 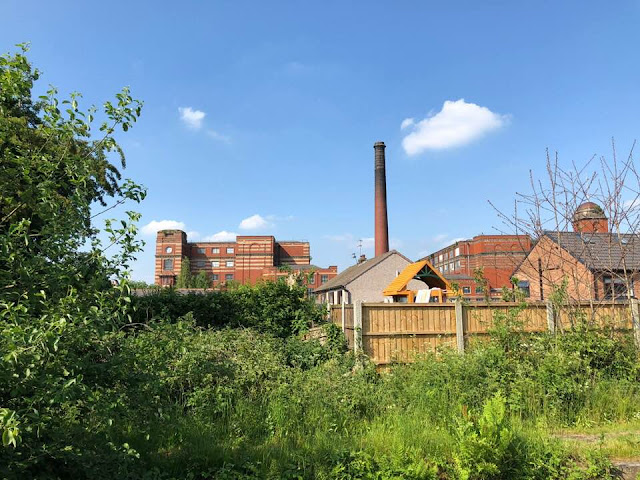 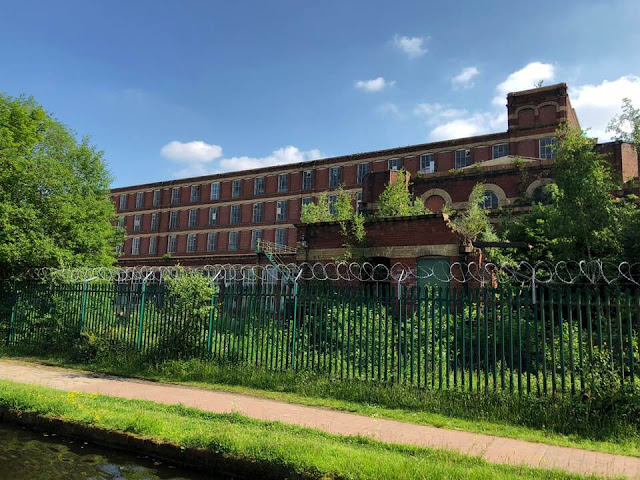 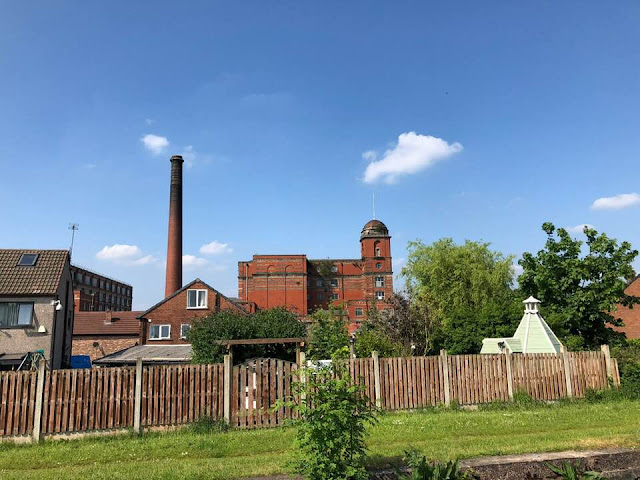 We cruised through Leigh and moored up soon afterwards once we were away from the houses.  We sat outside for the rest of the day enjoying the sunshine and chatting to the odd passer-by.

Talking about odd passers-by, Heidi came by on her pirate boat where see makes and sells badges, amongst other things.  We hadn’t seen her since the Black Country festival a couple of years ago but have kept in touch on our mutual travels through Facebook.

We have to move tomorrow to get water, but we may only have to cruise a mile to the water point at Planks Lane and then we can spend the day at the local nature reserve.

From memory, you can only use PL bridge outside peak times, but the Water Point is on the south side. Are you enjoying the most un-Payne-like dashing around?

I’ll put you right on the Barton bits privately. But then I was brought (drug up) round there.
Walked over the then M 62 ,2 lane each way bridge before it opened as a nipper
Take care see you soon.

Yes thanks Mike and yes, PL bridge can only be used out of rush hours

Look forward to hearing from you Dave :)