On Saturday morning we walked into Lymm to get a few provisions.  Lymm is a prosperous village on the outskirts of Warrington – evidenced by the Bentleys, Porsches and Range Rovers popping in to get the Saturday papers.  We cruised a couple of miles to Thelwall which is right next to the Manchester Ship canal.  There is a penny ferry at Thelwall and I fancied using it.  Thelwall is better known for the viaduct which carries the M6 across the ship canal.  It seems that the Thelwall viaduct is mentioned in nearly every traffic report. 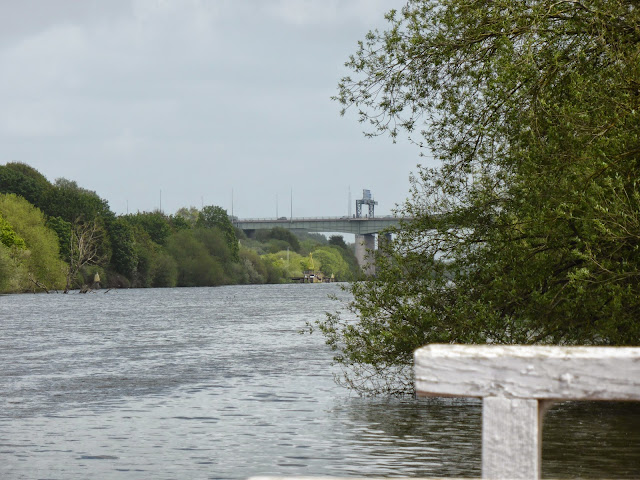 Unfortunately it was too windy for the ferry to operate so I’ll have to go another time. The current ferry is an aluminium affair with an outboard motor and it cannot cope with the wind.  The previous boat was a wooden rowing boat that could withstand the wind. 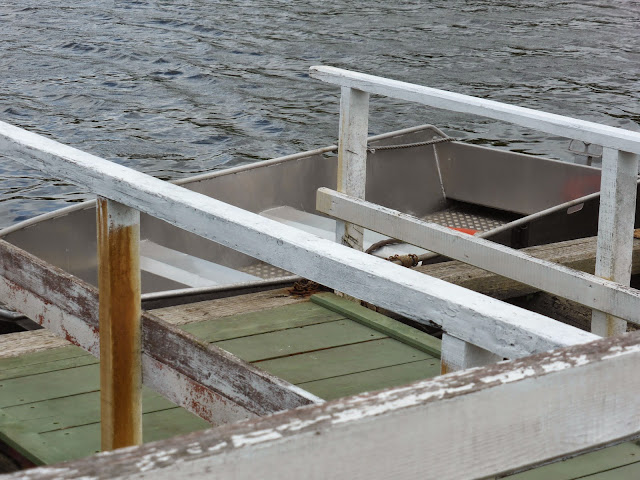 The ferry only operates at certain times, takes four people at a time and the fare is only 11 new pence. 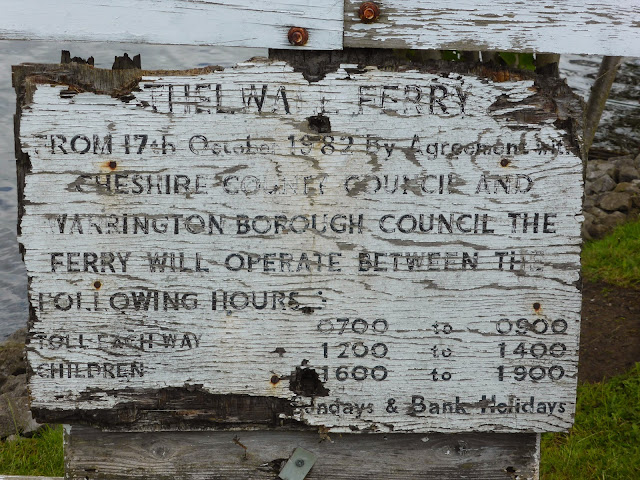 The landing stage area seems to be very well kept. 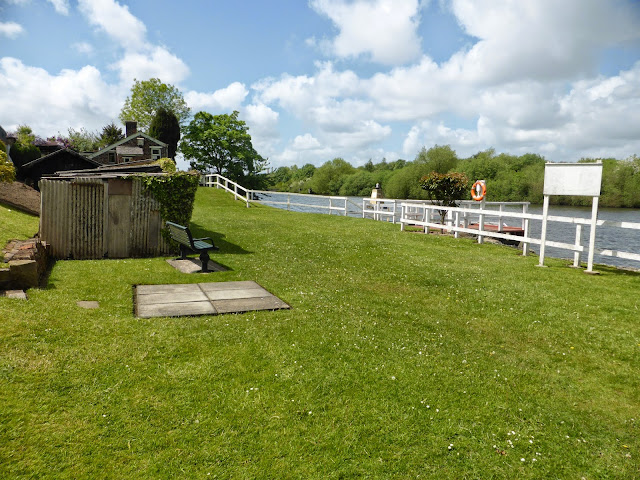 We noticed that several trees in gardens around Thelwall have been carved into creatures – some enterprising artist probably follows tree surgeons around. 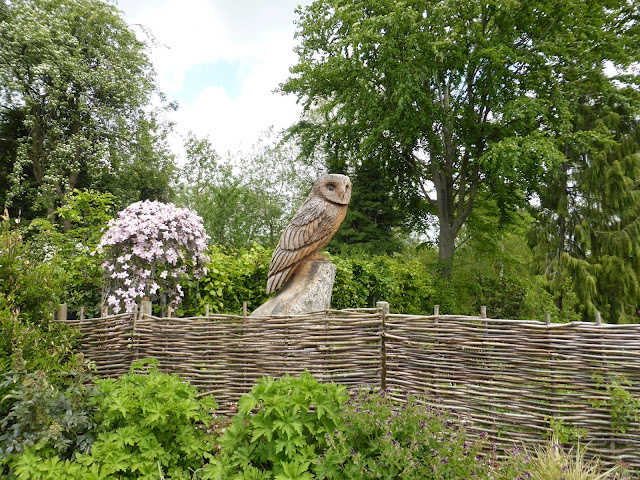 Interesting inscription on the pub in Thelwall. 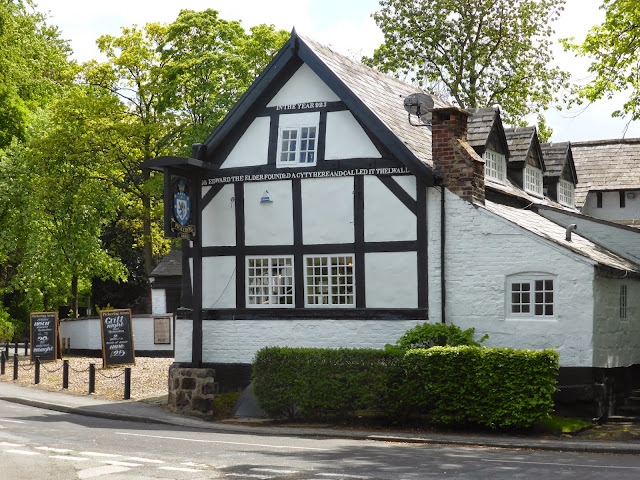 In the afternoon we carried on through Stockton Heath and other parts of Warrington.  This Orange Tip brightened up the day as it was too windy for live butterflies to be out. 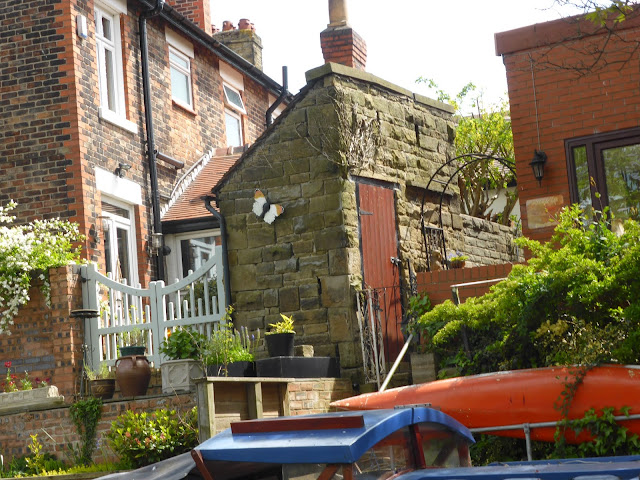 We passed the first cygnets we have seen this year. 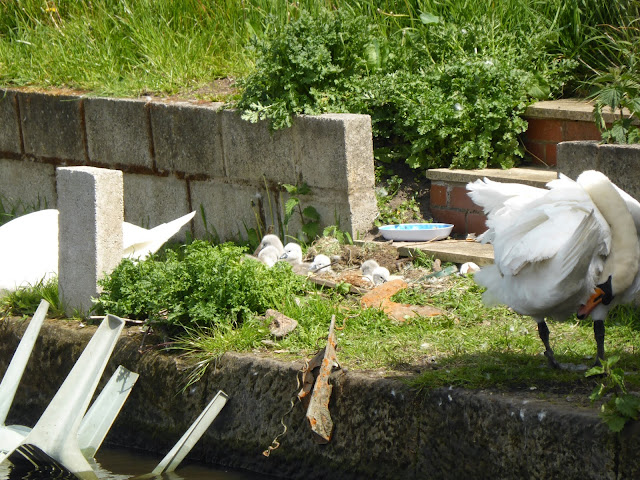 Bridges are few and far between on this canal but some seem to be full of gongoozlers for some reason. 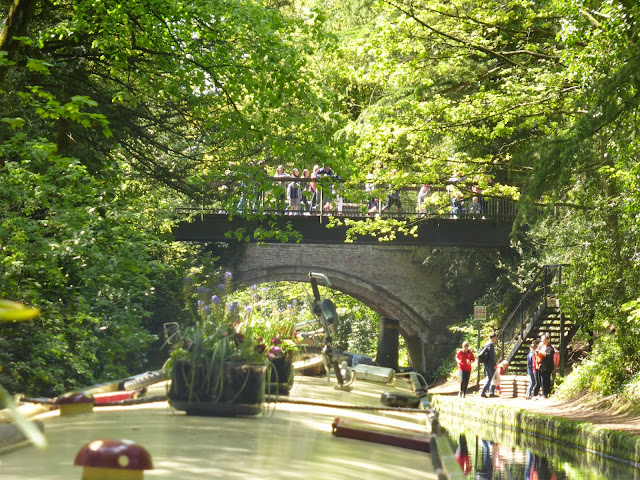 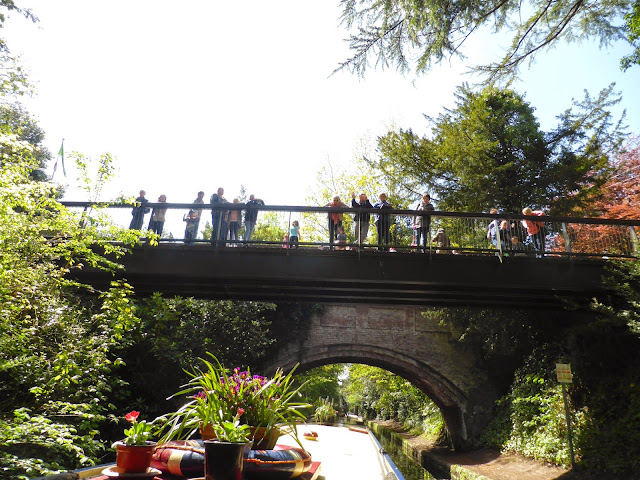 We moored for the night at Moore. We walked into the village and tried out the Red Lion – yet another pub described as ‘traditional’.  Our theory is that ‘traditional’ means ‘tired’.

It was still windy but we were determined to get going so set off mid morning as it wasn't as windy as Saturday. 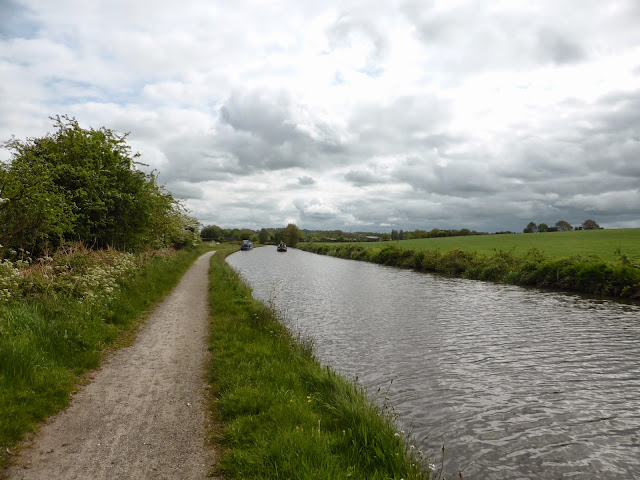 After and hour or so we reached a junction where the main line of the Bridgewater heads off to the right to Wigan but we went left down to meet the Trent & Mersey canal at Preston Brook tunnel.  Not a particularly inspiring junction as the M56 runs right across it. 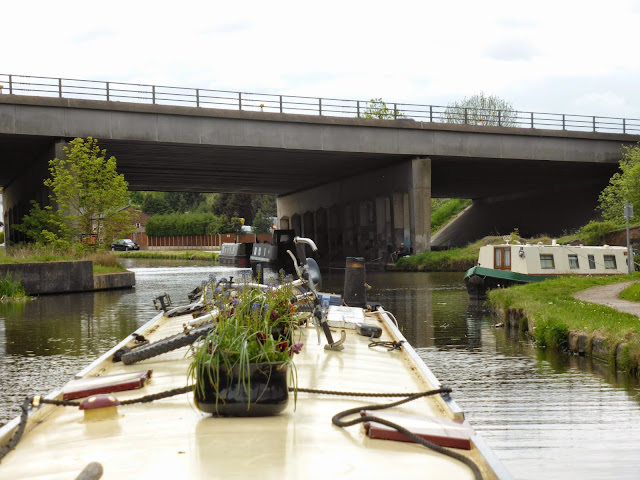 There were three boats moored under the motorway bridge in various states of repainting. It reminded us of when our boat was repainted under the A34 in Berkshire. 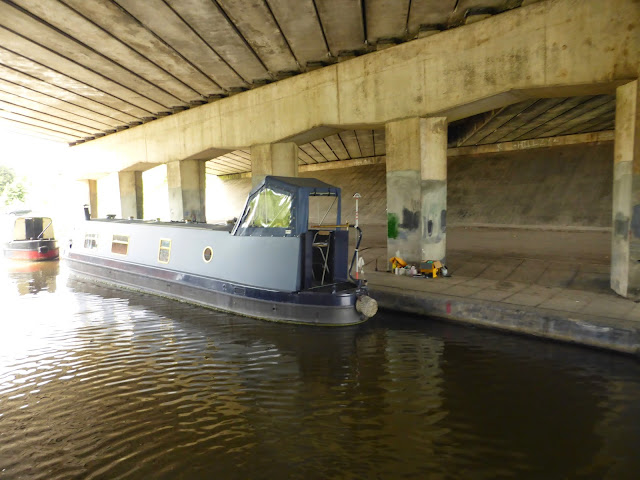 The tunnels in this area are unusual in that they are only wide enough for one boat and they have a self regulated entry system.  We were heading south and had a ten minute window to enter the tunnel from half past the hour.  As we arrived on the hour we decided to have lunch whilst we waited. 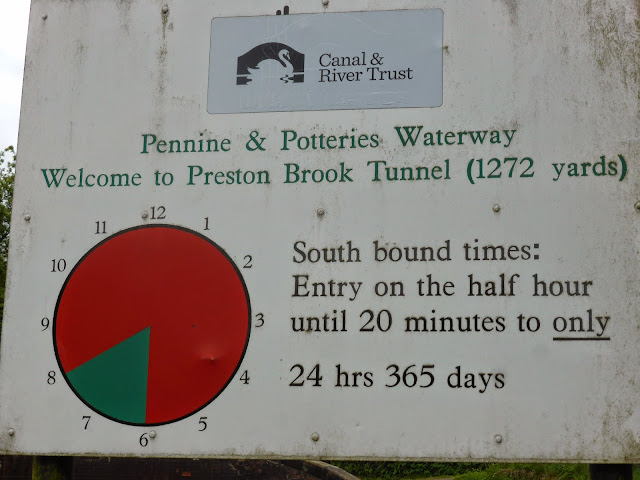 There was a plaque on the tunnel entrance indicating that the canal is twinned with a Belgian canal – the first time we have been aware of any canal being twinned. 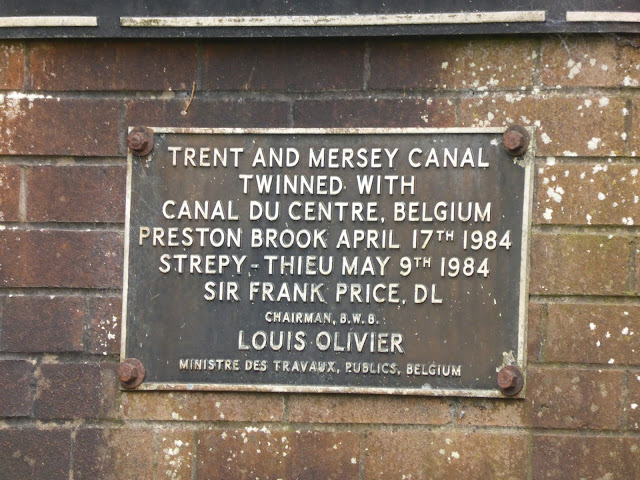 We are planning on getting to the other end of this canal by July to see Catherine and Sophie in Nottingham.  We know it’s about 100 miles but we have plenty of time so we have planned in some diversions such as going on the River Weaver, Caldon canal and the Erewash canal. 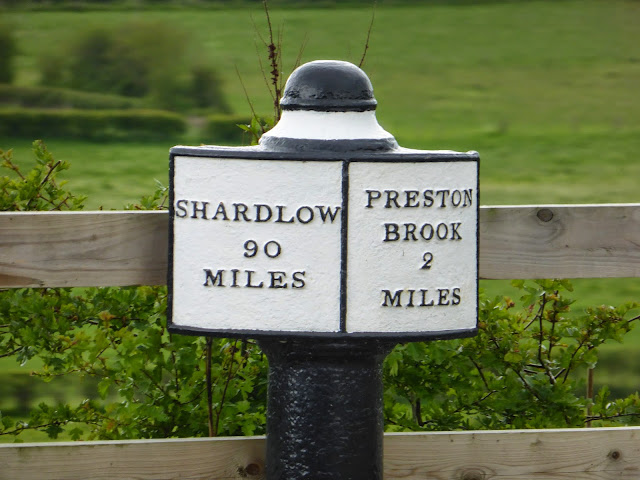 I still find it amazing that this canal was built 240 years ago. 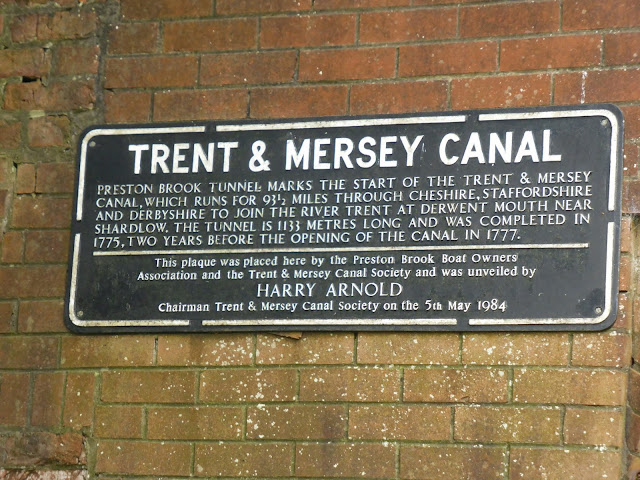 After travelling through the tunnel there was a stop lock which was used to ensure boats stopped and paid their tolls.  It only had a rise of about 12 inches. 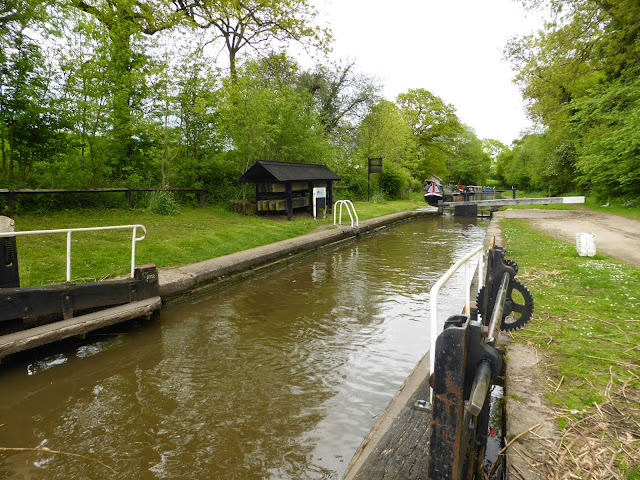 Just after the stop lock was dry dock.  This seemed to be in a strange place in the country rather than in a town. 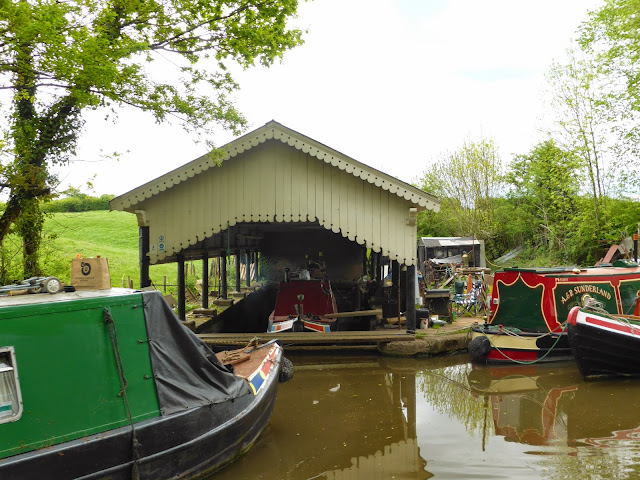