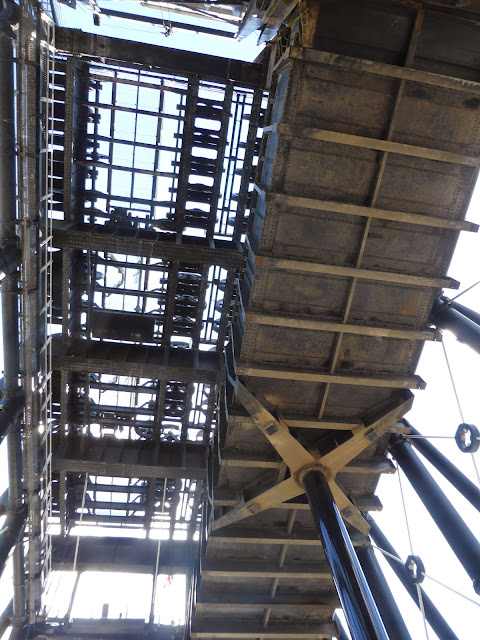 As it was pouring on Monday morning we didn’t get on our way until it cleared up at midday.  It was so nice being out in the country again and on a narrow canal.  A narrow canal means you have to travel even slower but that makes it even more tranquil.  The wild garlic  is now in full bloom and quite stunning. 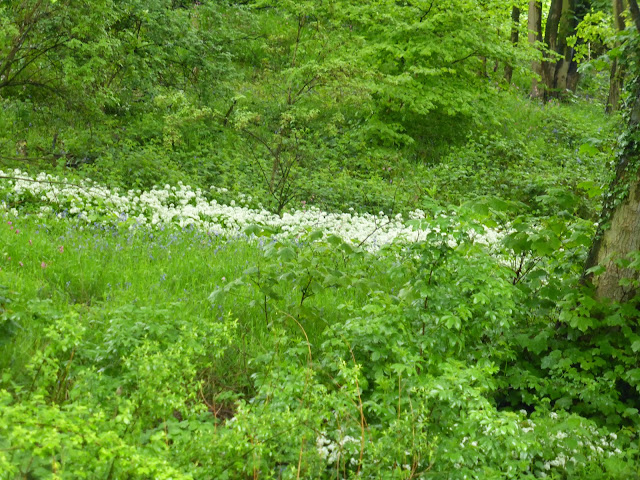 Saltersford tunnel is one way only and when travelling south as we are it can be entered at half past the hour.  As we had some time to kill we stopped for lunch. 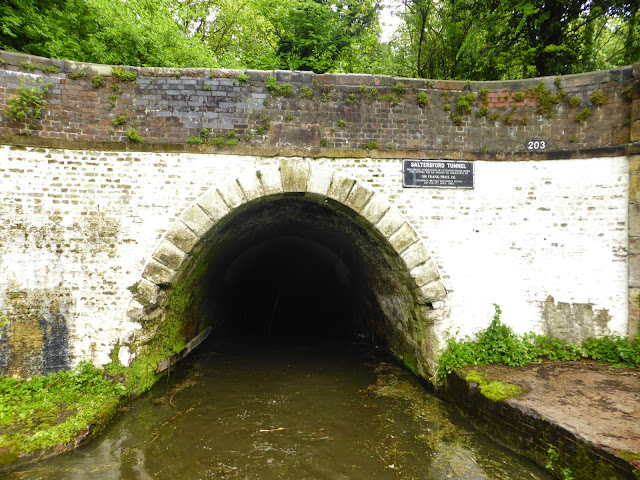 Shortly after Saltersford tunnel we came up to Barnton tunnel.  This is also one way only but you are allowed to enter if you cannot see a boat coming the other way which is quite surprising as it is over ½ mile long.  Our entrance was on a bend so I had to get the boat into the tunnel before we could see if it was clear or not. 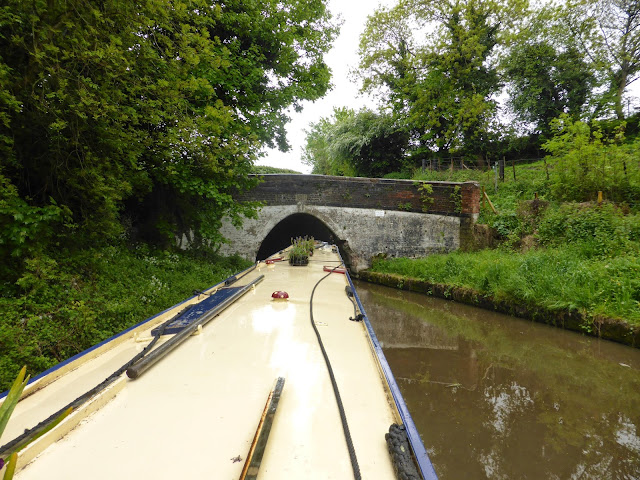 As we approached the Northwich area we could see large salt works in the Weaver valley.  Most are either derelict or converted to make other chemicals. 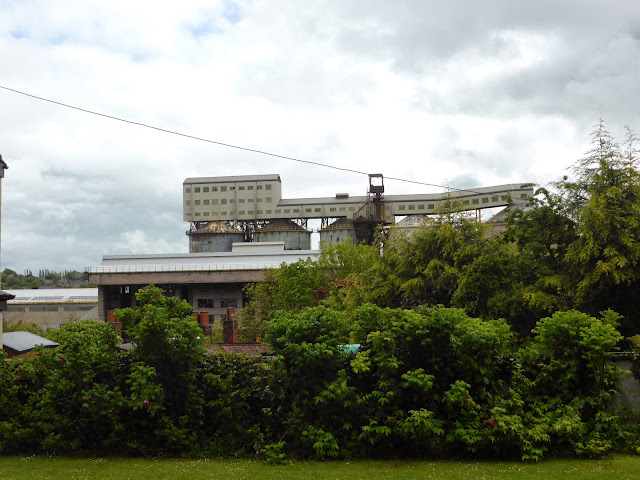 We arrive at the Anderton boat lift and went to see what the waiting time was as we hadn’t booked a passage down to the River Weaver.  We were fortunate that we only had to wait 30 minutes until a trip boat was due to come up from the river.  The boat lift was built in 1875 and consists of two caissons each of which can hold two full length narrowboats side by side.  A steam engine operated a hydraulic ram under each caisson and as one went up the other came down.  The drop/rise is 50 feet but feels a lot higher as it feels like you are on a boat in a bath!  The steam engine was replaced by electric power in the 20th century.  The lift ceased operation in 1983 but was restored to full operation again in 2001/2.

This is entering the holding area at the top of the lift.  The two troughs are aqueducts with guillotine gates at either end.  We were asked to go into the left hand aqueduct and you can see the gate is partially lifted. 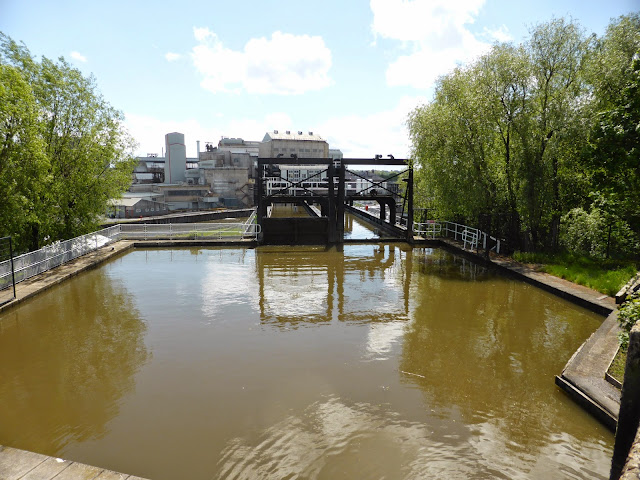 The gate is fully lifted so we could swing round and go in. 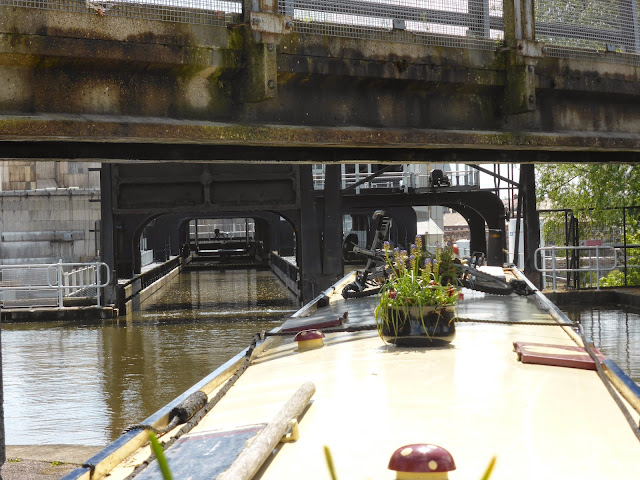 Once in we had to stop whilst the gate was dropped behind us. 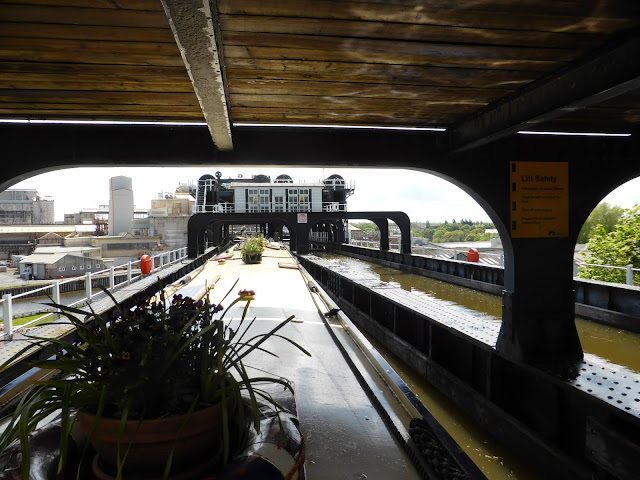 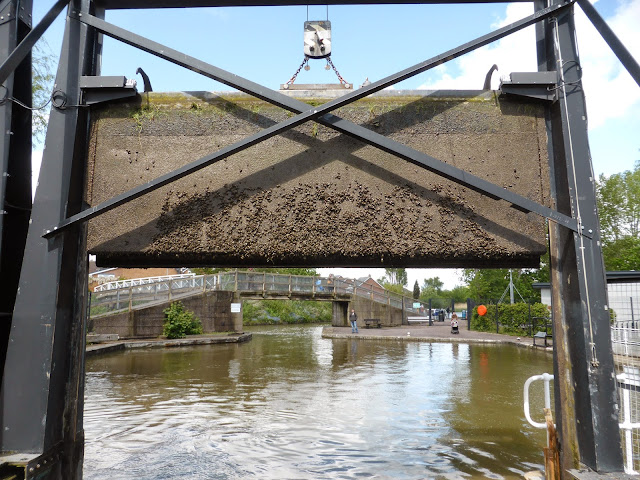 This is looking down onto the river from the lift aqueduct. 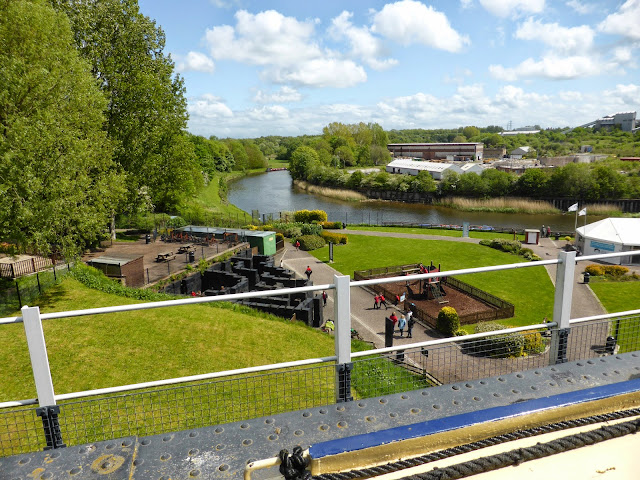 The front gate of the aqueduct was lifted and we moved forward into the caisson. 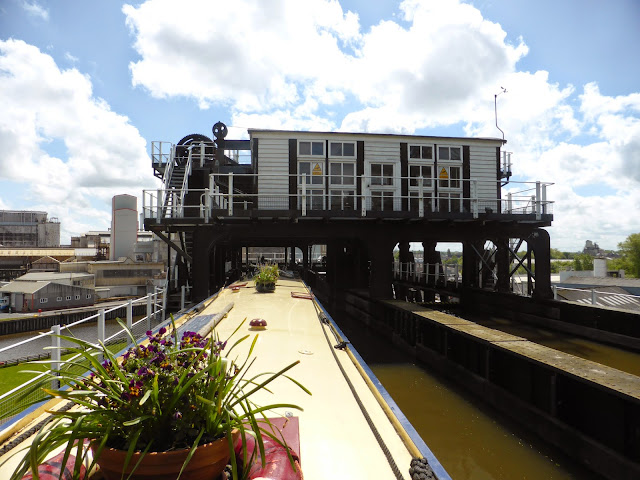 Here we are looking down to where the other caisson will ascend. 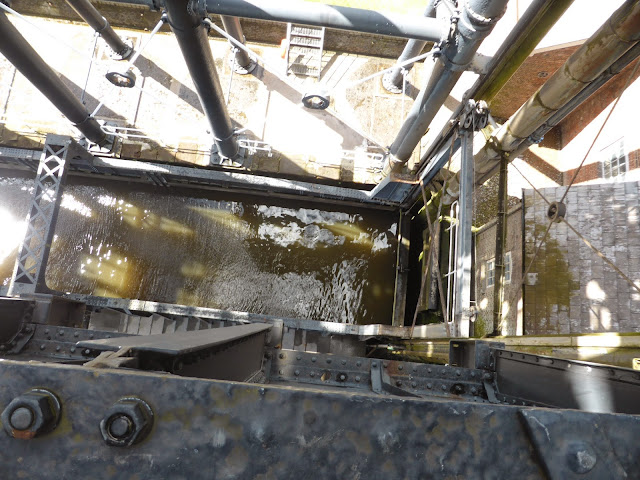 After a while the trip boat entered the lower caisson so we were nearly ready for our descent. 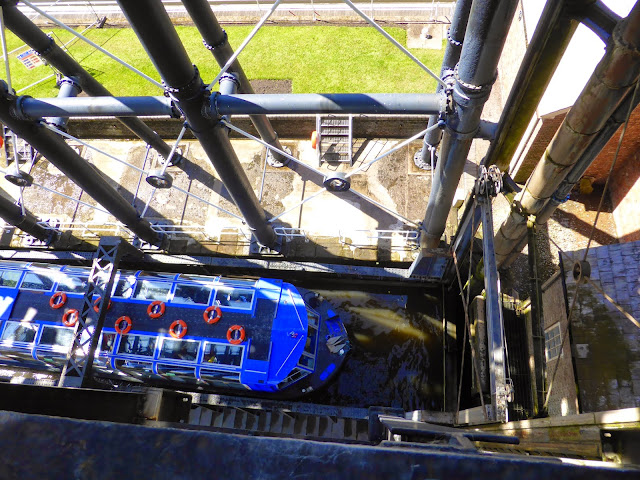 Here is the half way point where we passed each other.  You can’t see them but the trip boat was full of people also taking photos. 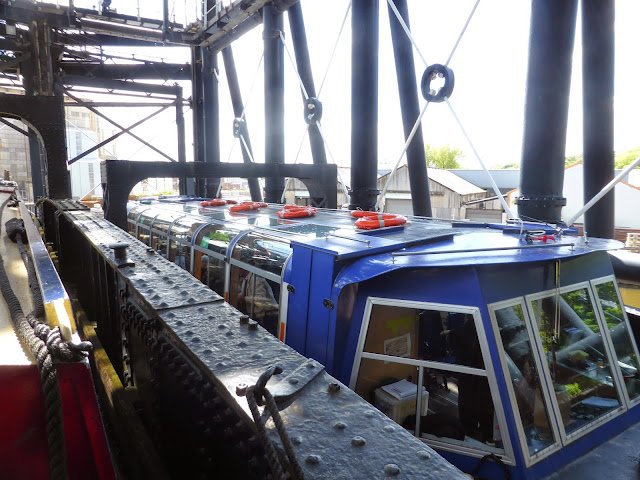 We found it incredible that one hydraulic ram can hold that weight – really awe inspiring.  One of the operators at the top in high viz gives an idea of scale. 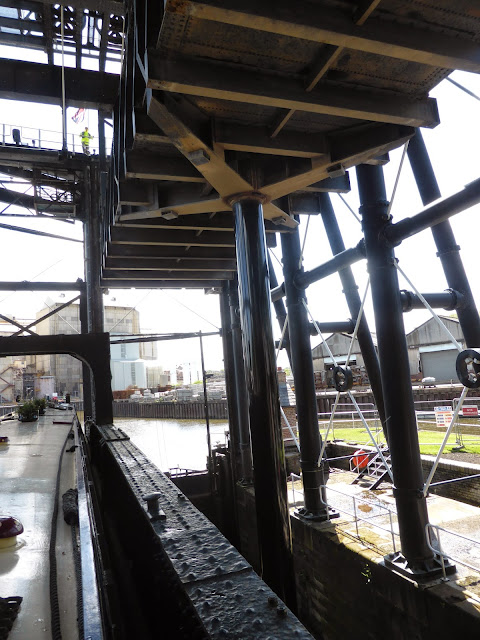 This is at the bottom looking back up.  The picture at the top of the page is also looking up but shows the other caisson which is full of water and a boat! 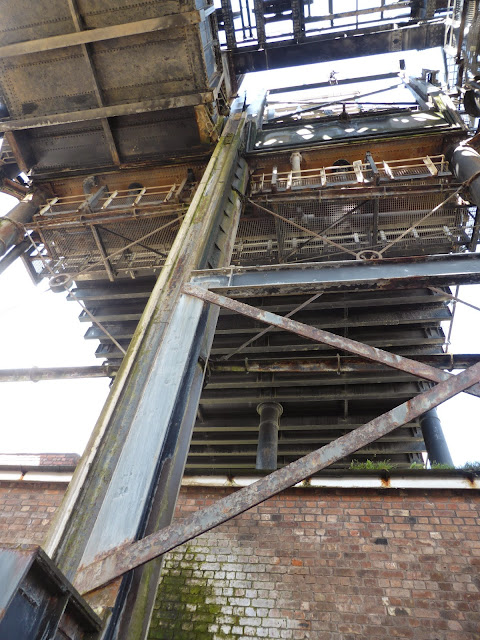 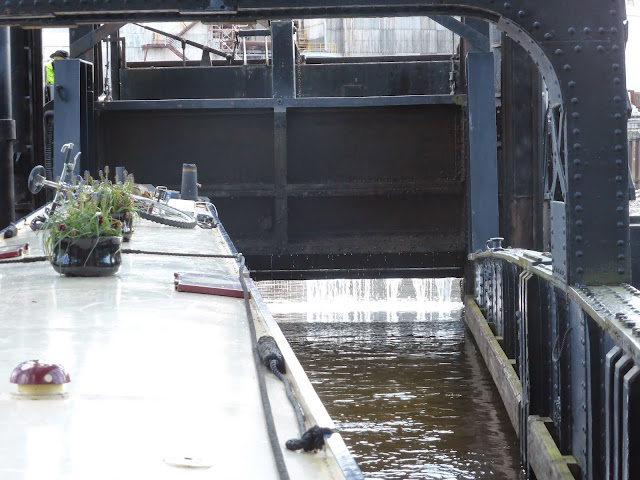 … and we were out onto the River Weaver. 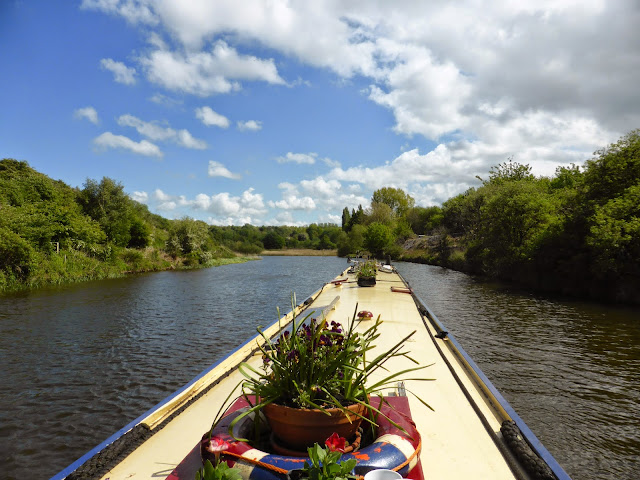 Looking back at the lift we could onky marvel at its size and construction. 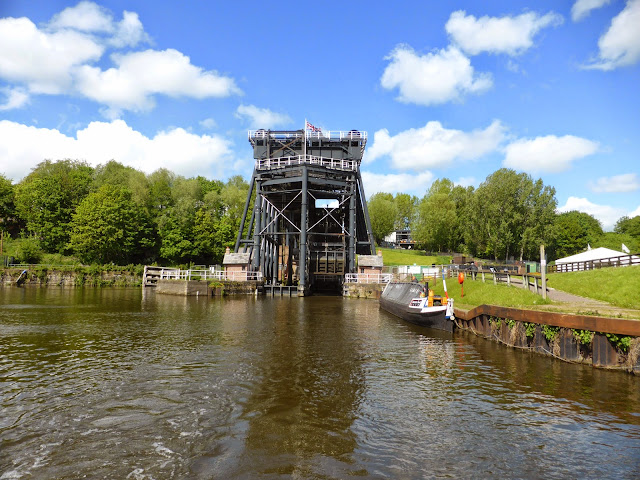 We all wear our life jackets on rivers because they are generally much deeper. 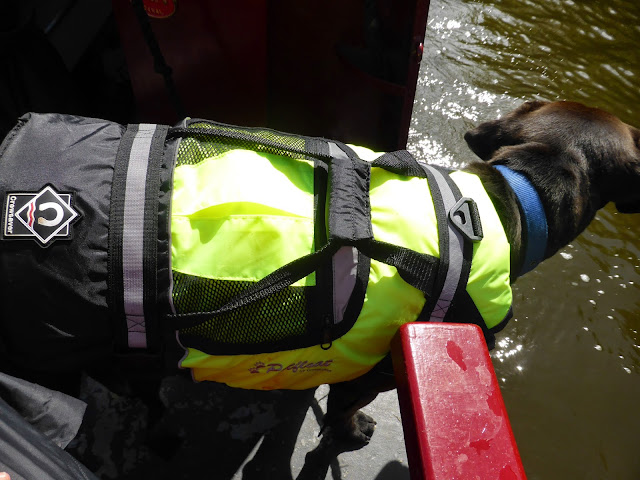 We turned left when we came out of the lift and headed into the middle of Northwich on the River Weaver.  All the road bridges on this river, which runs from the old salt towns of Cheshire like Northwich and Frodsham down to Runcorn where it meets the River Mersey and the Manchester Ship canal, are massive swing bridges. 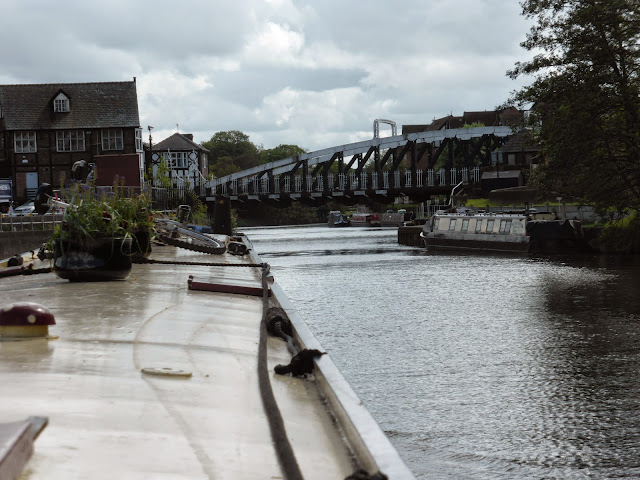 We went for a walk round Northwich but decided it was traditional (pub marketing speak for tired) although it did have a smart new Waitrose that we moored opposite.  We took advantage of the free coffee from Waitrose before retiring back to the boat for the evening.  Here is us moored for the evening – Waitrose is on the other bank just out of site to the right.  We had only just moored up and Buddy had already found a stick to chew! 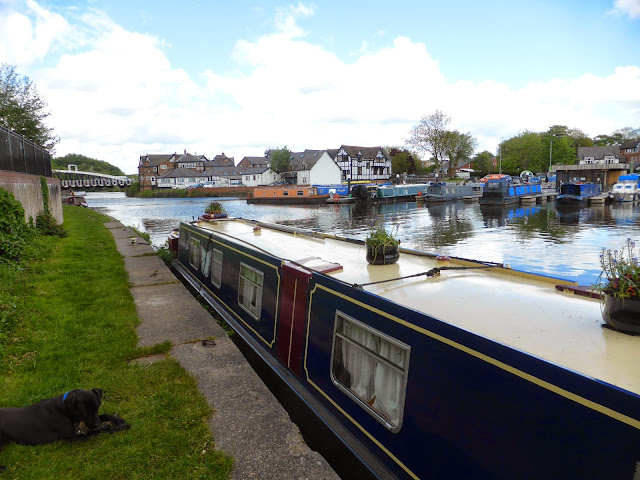 That is fantastic Neil and Karen. Very, very interesting. I didn't know such beasts existed. I love good old fashioned engineering that relies on weights and pullies (and no computers!)xx

That is fantastic Neil and Karen. Very, very interesting. I didn't know such beasts existed. I love good old fashioned engineering that relies on weights and pullies (and no computers!)xx

Glad you enjoyed it Sarah. The only other one in the UK is the Falkirk wheel in Scotland but that was opened in 2002.

Nearly 150 years old and still operating - fantastic! I hope you stay in Europe long enough to cruise through the four similar ascenceurs on the Ancien Canal du Centre in Belgium. Blows your mind!