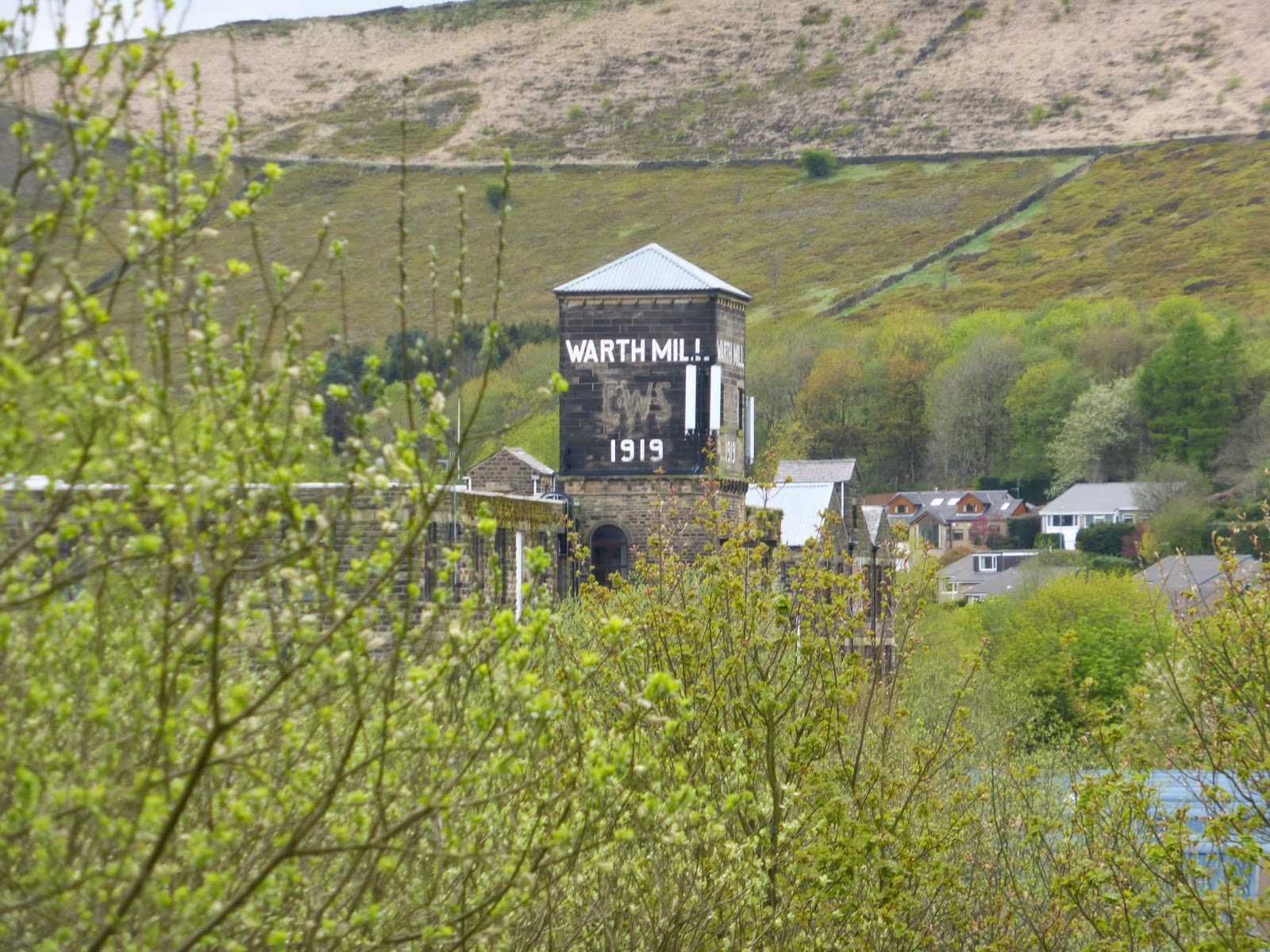 On Monday evening we had had a walk around Uppermill and couldn’t help laughing at this woman and her dog. 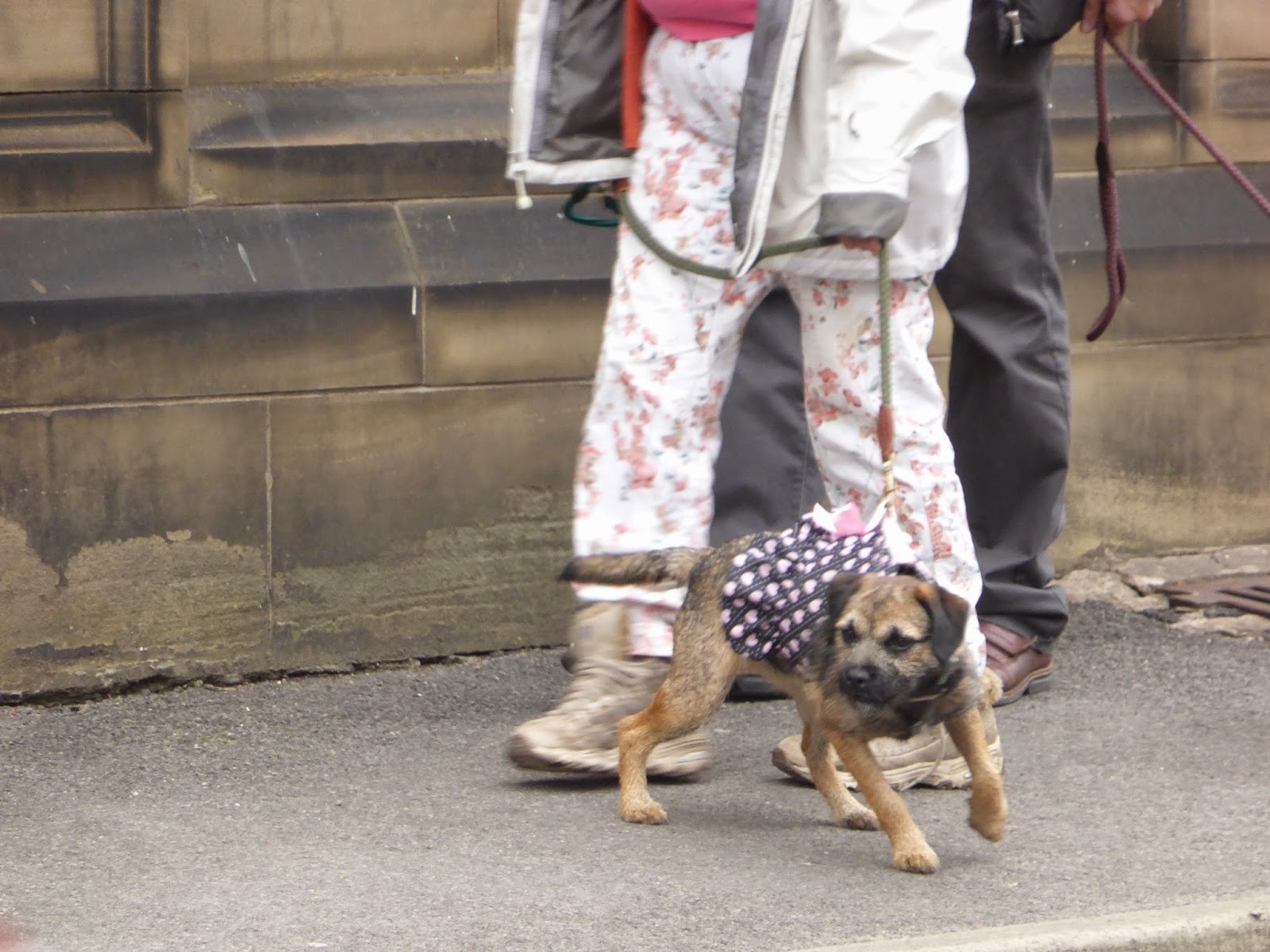 Mind you they were nearly as stupid looking as these folk singers with flowers in their hair. 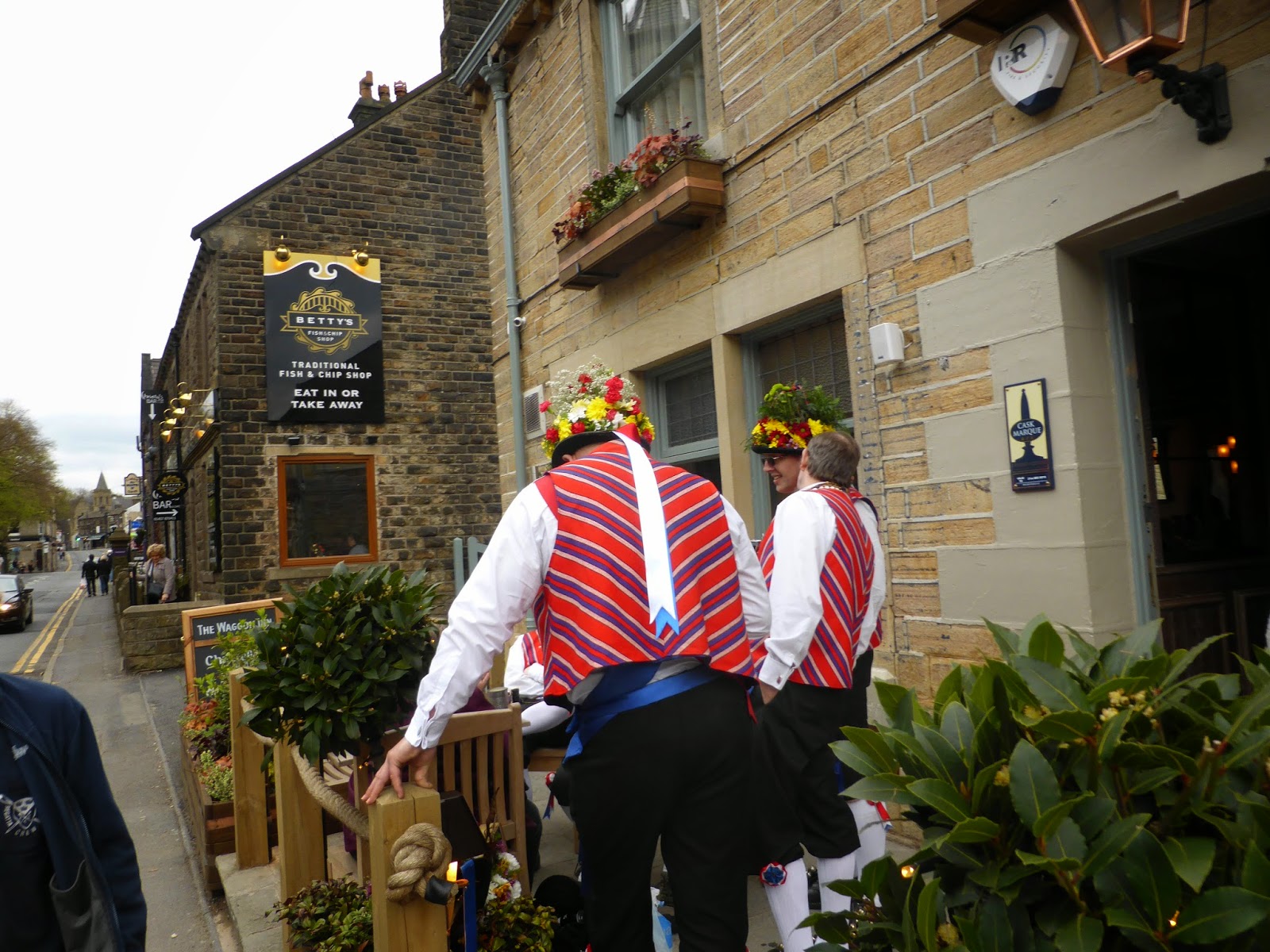 Even though heavy rain and strong winds were forecast for Tuesday we had to get to Diggle by the end of the day.  This is because the southern entrance to Standedge tunnel is at Diggle and we have a passage booked on Wednesday morning.  Passage is only available on Mondays, Wednesdays and Fridays and then only three boats are allowed each day.  Also no passage is allowed in the winter between October and March.  Standedge tunnel is the longest in the UK by far at over three miles.  The canal is 643 feet above sea level making the tunnel the highest in the UK.  It is also the deepest as at one point it is 636 feet underground.


We set off for Diggle quite early and it soon started to rain.  We had 11 locks to contend with and were keen to get the job done before the wind got too strong.  We went under the Trans Pennine railway at this viaduct. 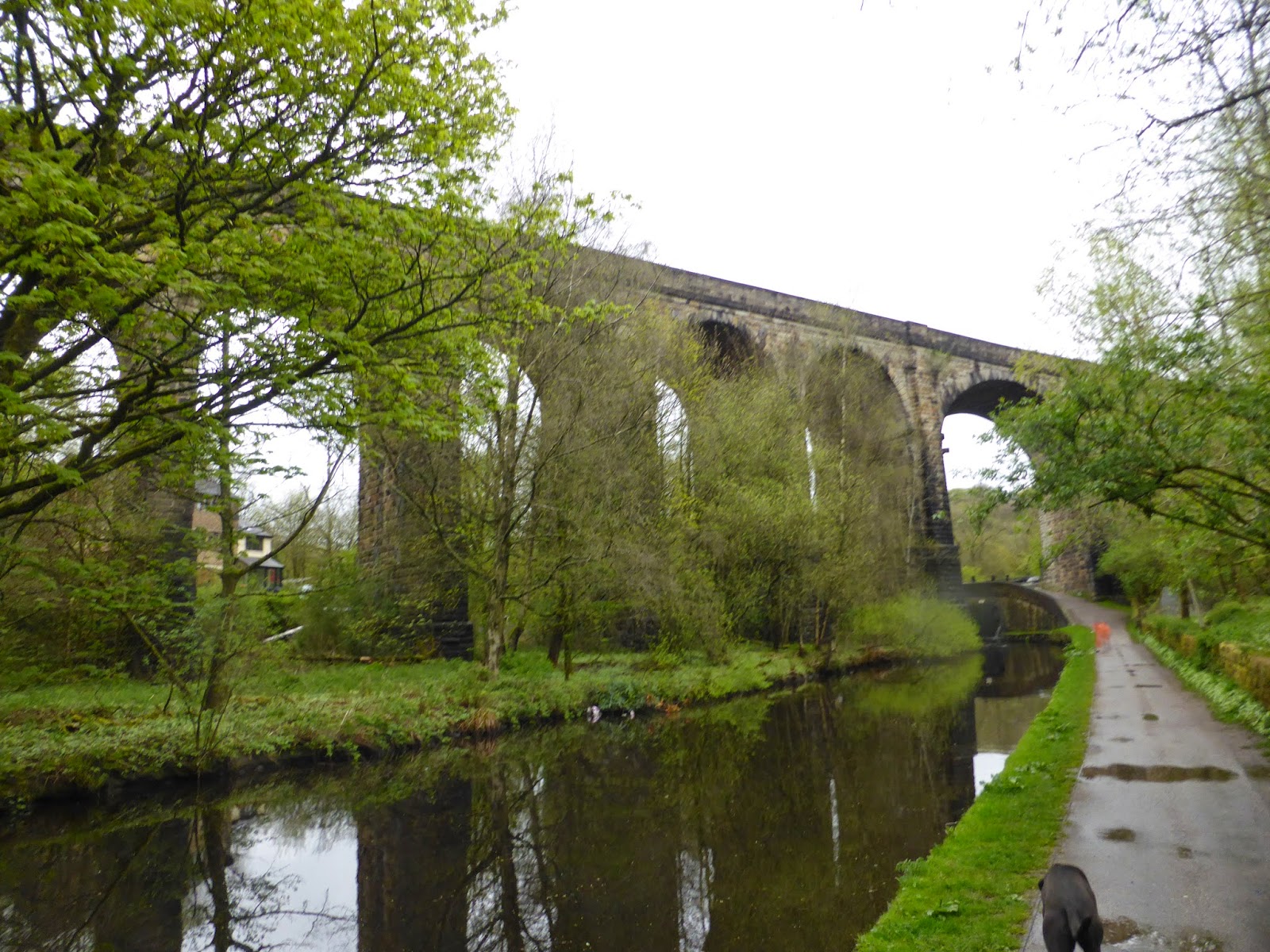 The top ground paddle gear on these locks were in pairs rather than one either side of the lock. 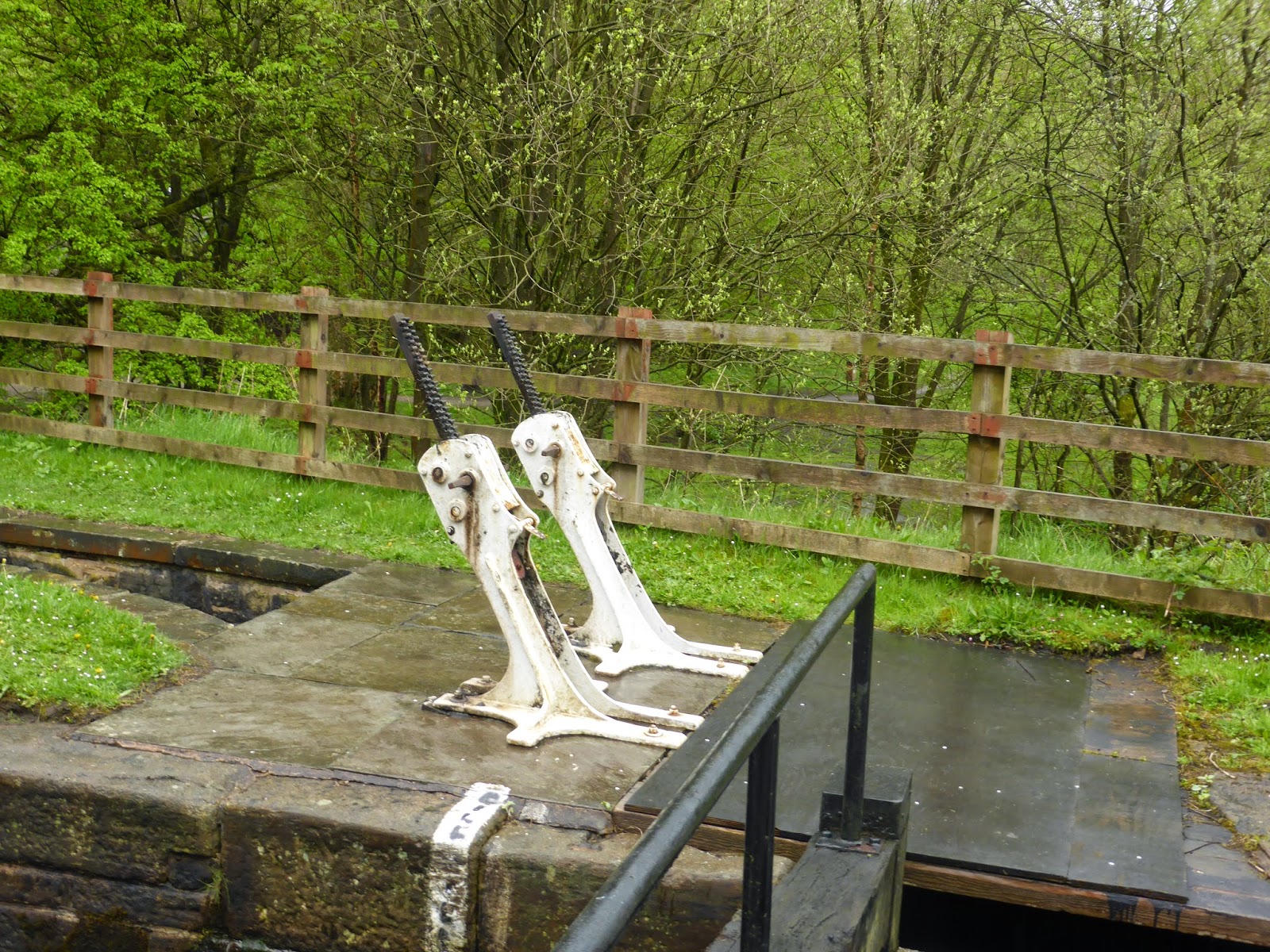 There were a few sections where two boats could not pass.  Mind you, with the restriction imposed by the tunnel we didn’t expect to meet any boats. 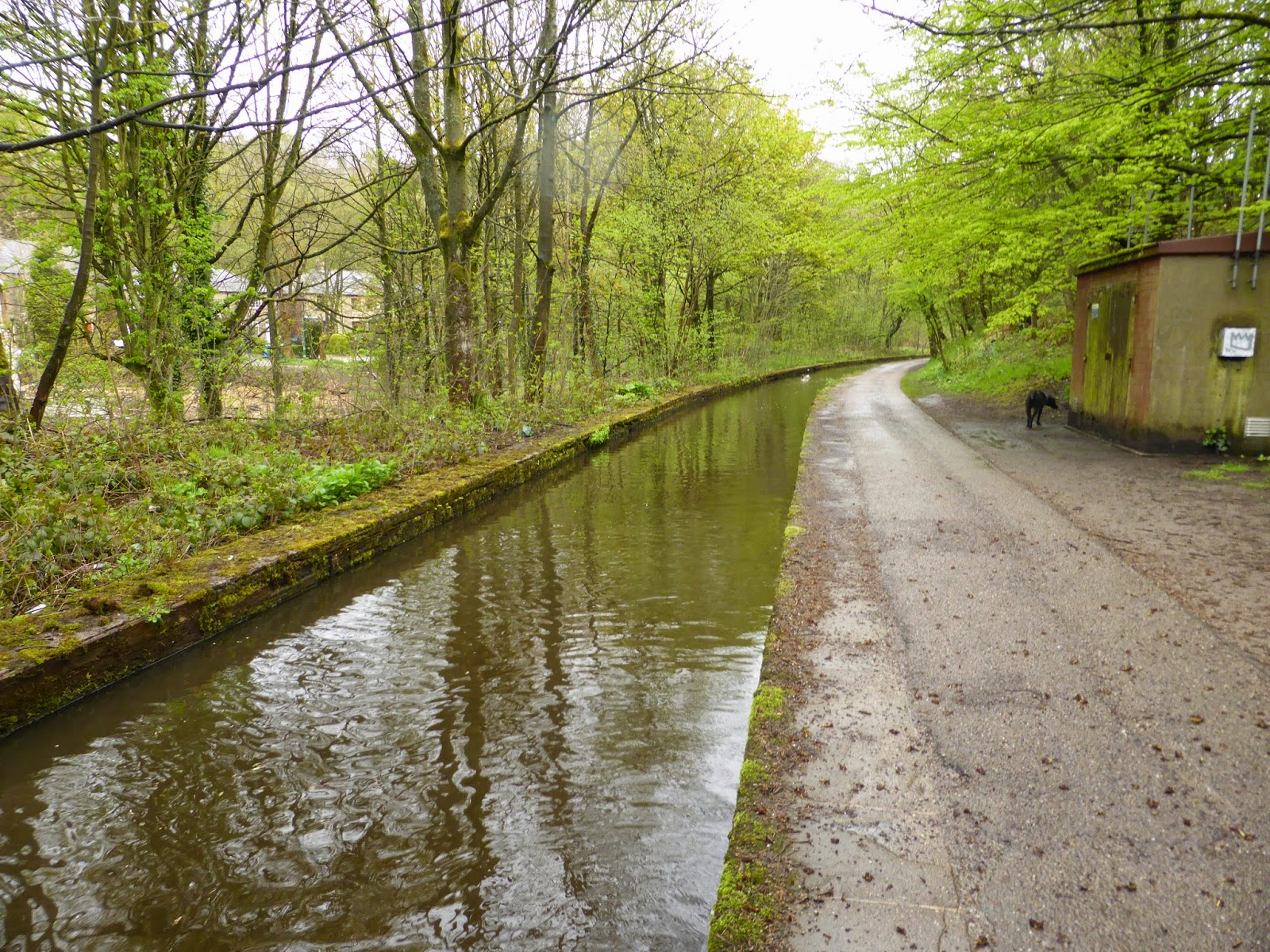 This transhipment warehouse and surrounding buildings have been restored into boaters facilities – rubbish point, pump out, showers, water etc. 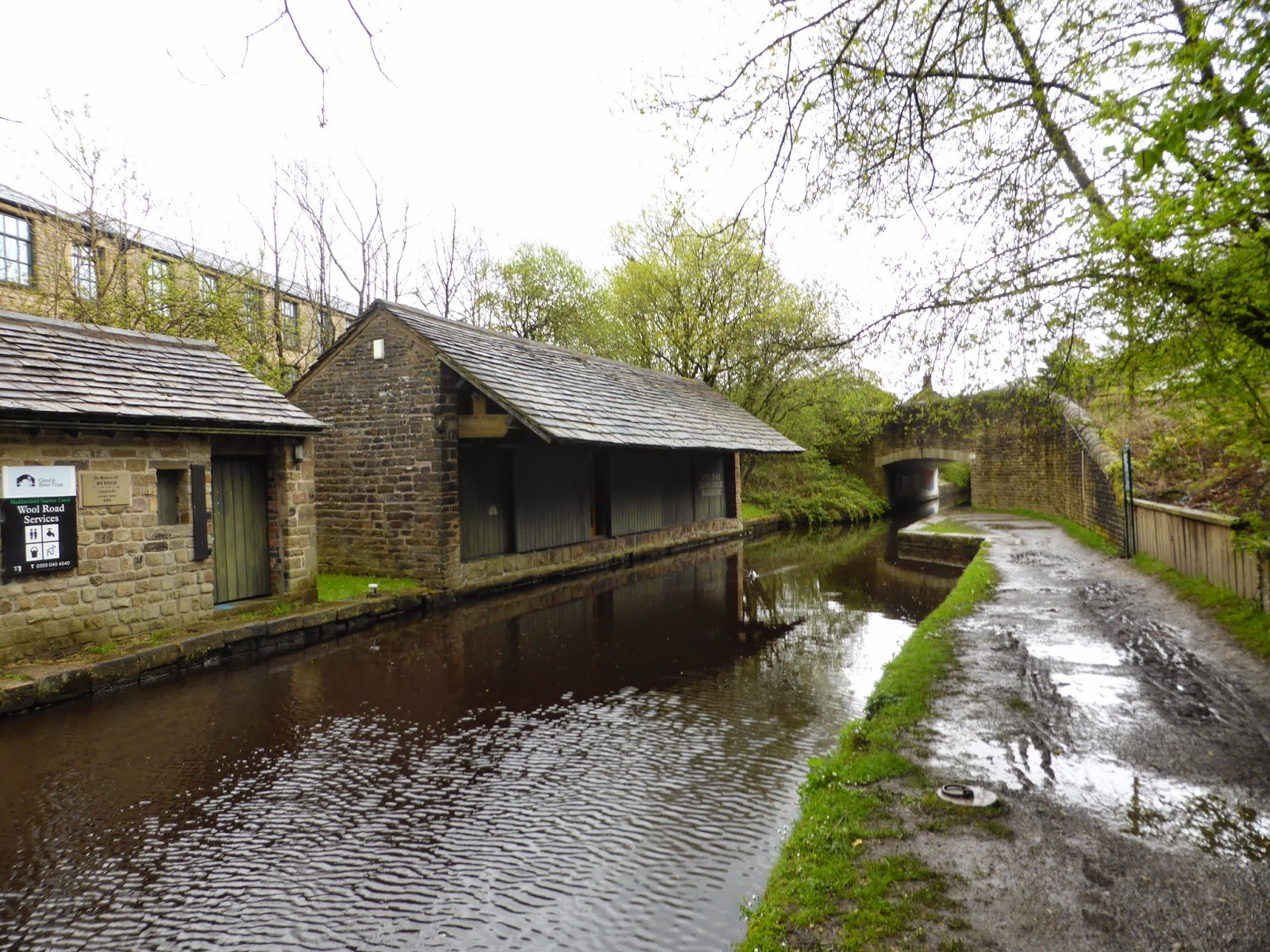 This information board shows the buildings before restoration. 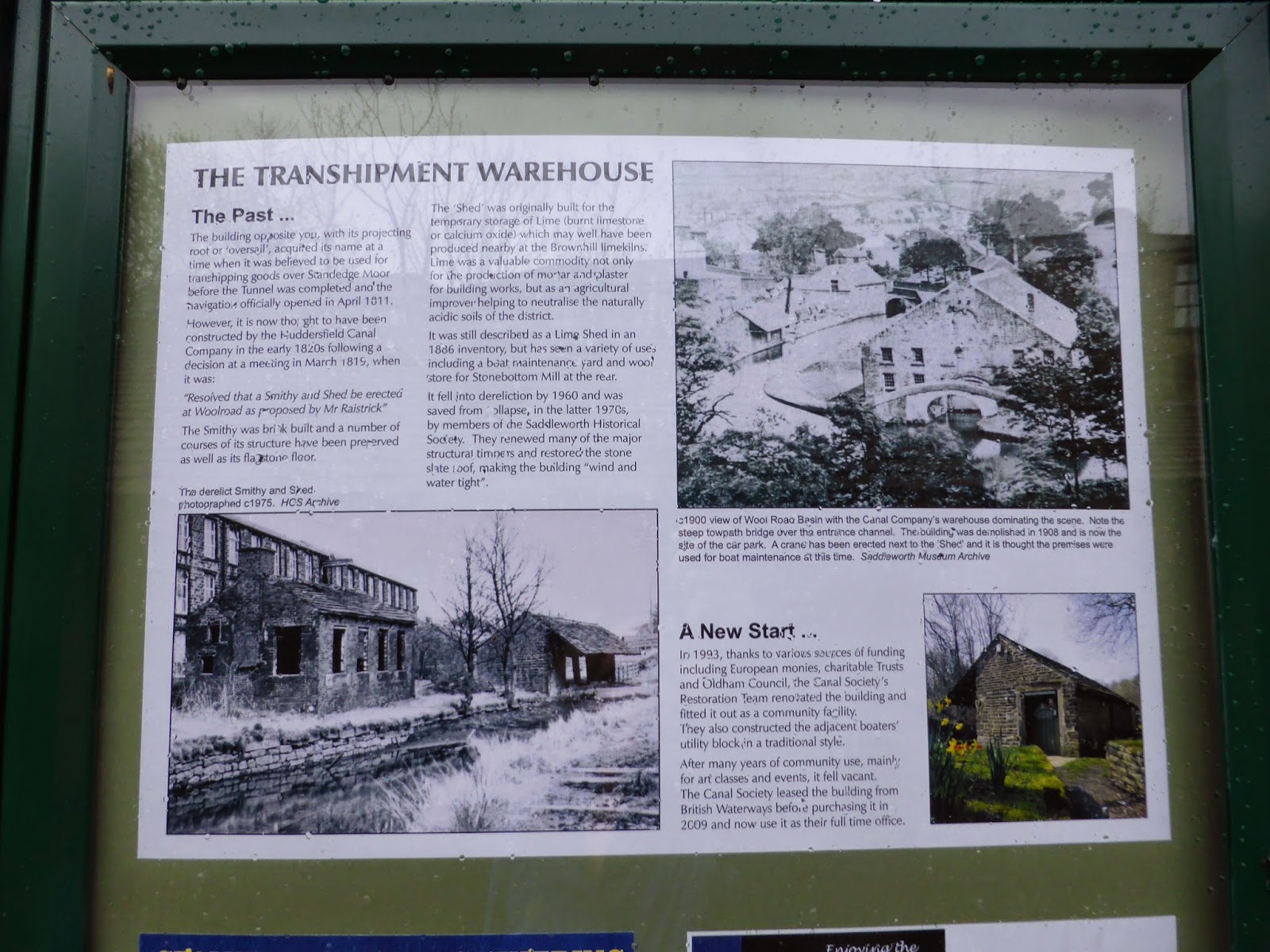 Some of the paddle gear had tin can shaped objects chained to them but we couldn’t work out what their use was. 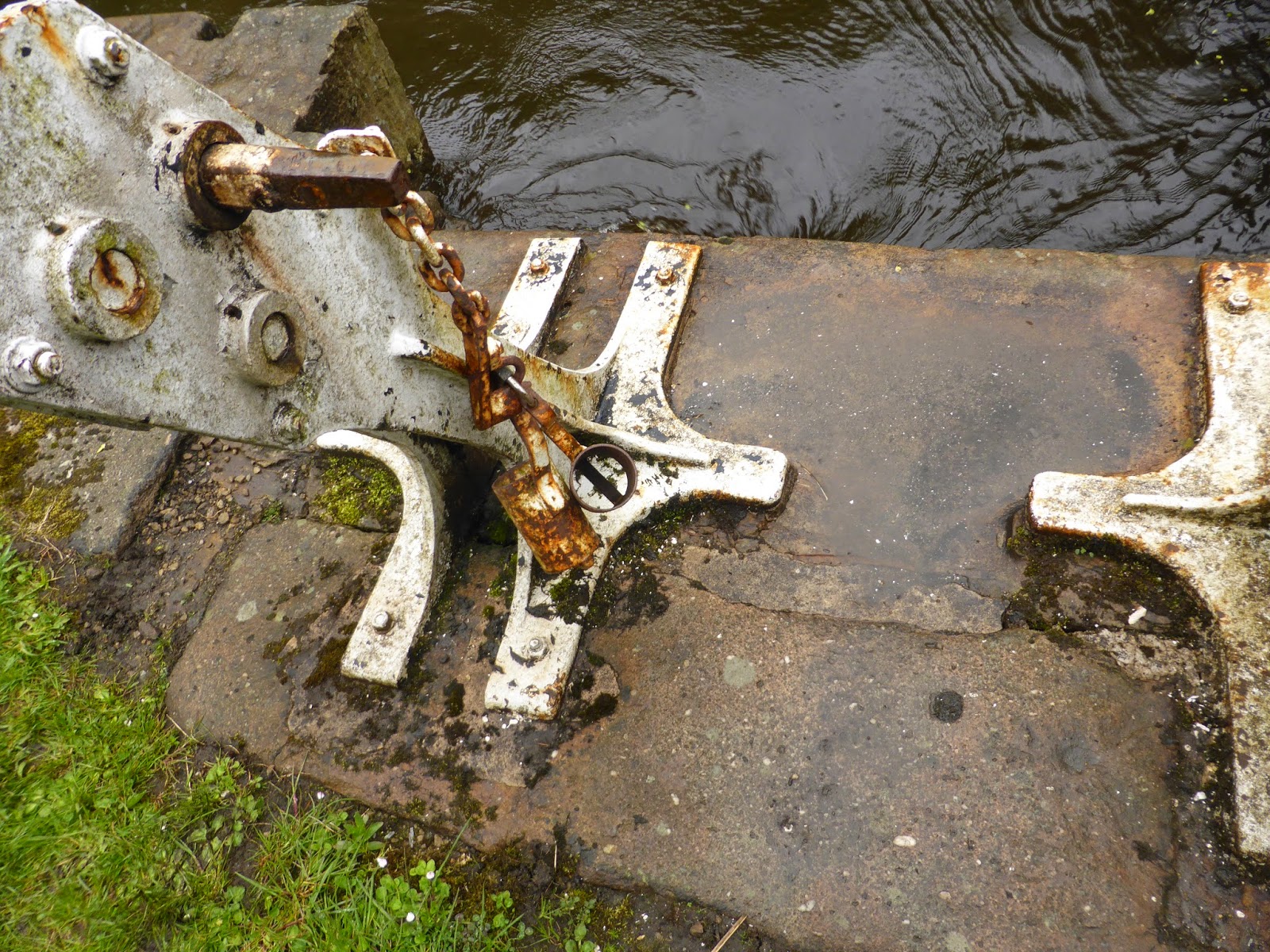 We moored just in front of the entrance to the canal tunnel which has locked gates as we have to be escorted through tomorrow.  One of the many requirements is that we can climb three metres up a vertical ladder which we obviously can because we have to use lock ladders. 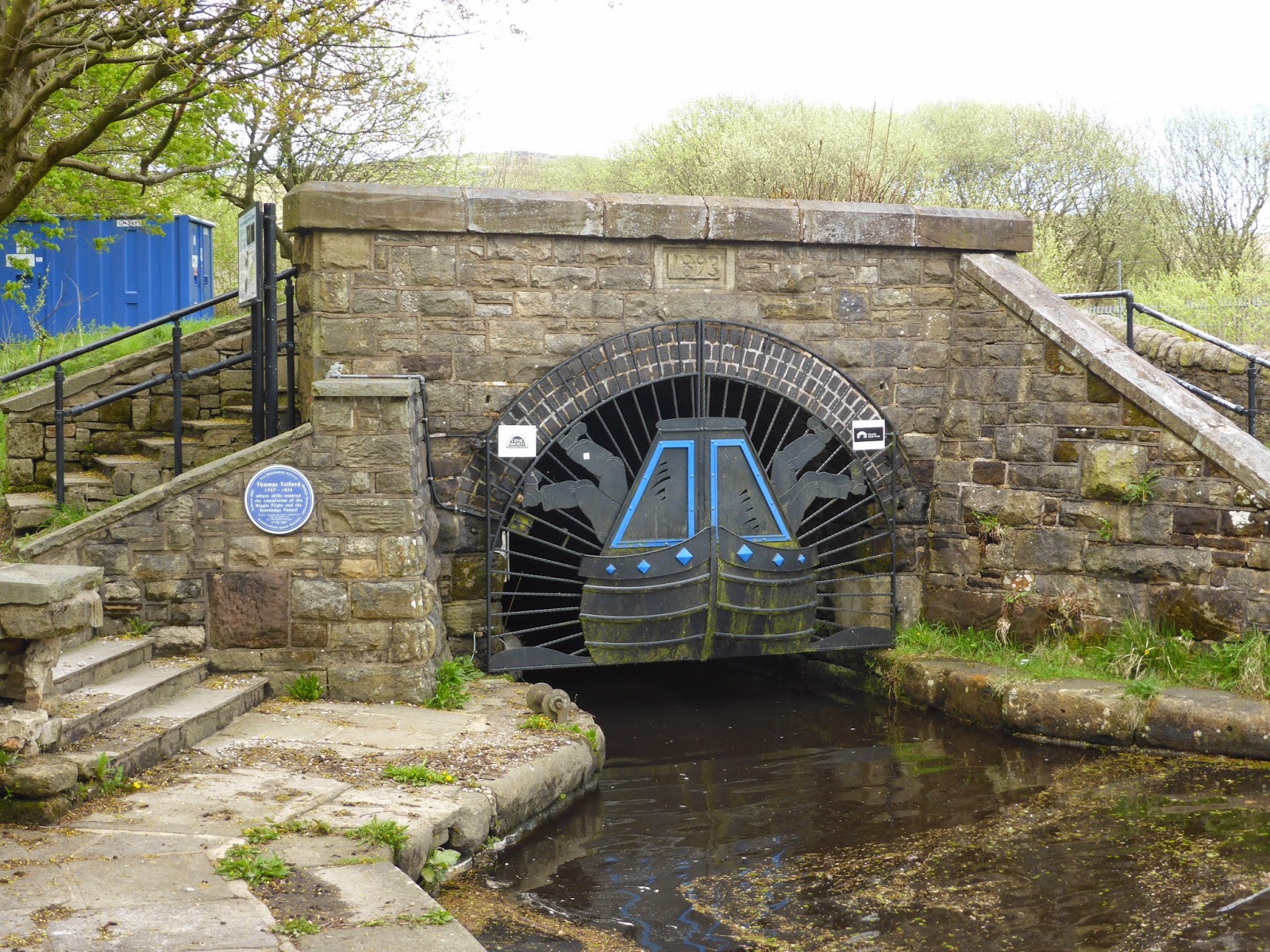 The summit area of the canal is quite touristy especially because of the tunnels.  For example there is a 'board' game made of limestone slabs that educates the players about the history of the tunnels. 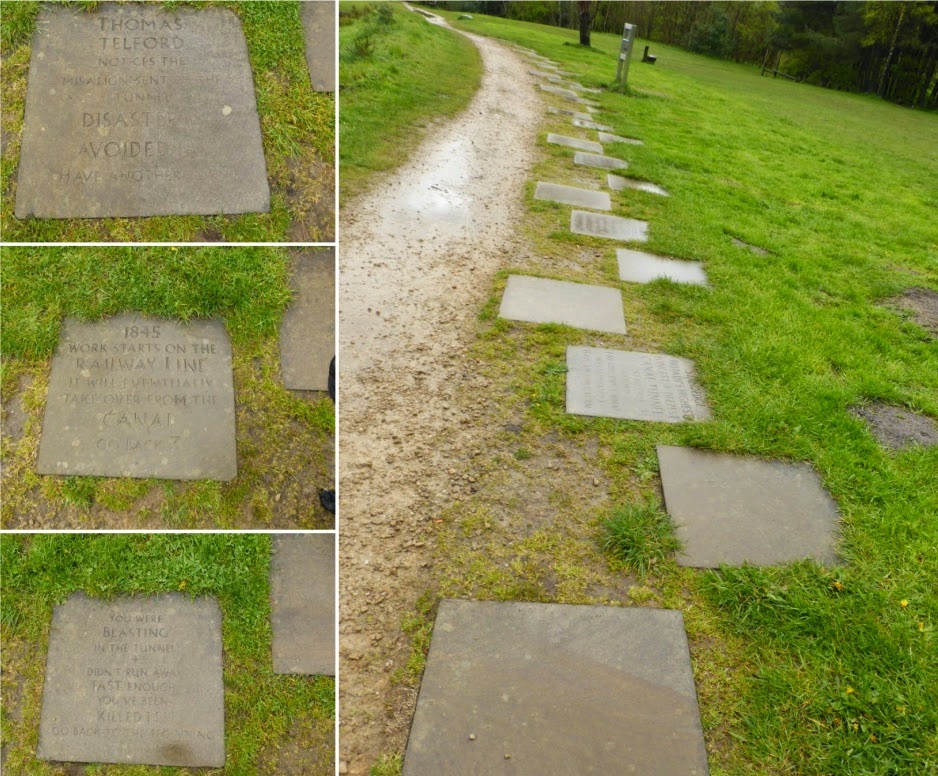 A single track railway tunnel was built in 1848 and increased demand created the need for a second one to open in 1871.  Further demand resulted in a double track tunnel being opened in 1894 and is still in use today.  The two smaller railway tunnels are no longer used but one has been made road worthy so that emergency vehicles can use it in case of problems in the canal or main railway tunnel.  Every so often along their length the tunnels are connected by passages which I am really looking forward to seeing.

The portals to the two single track tunnels can be seen to the right of the main tunnel.  There are yellow signs above each warning that there are height and width restrictions inside the tunnels!. 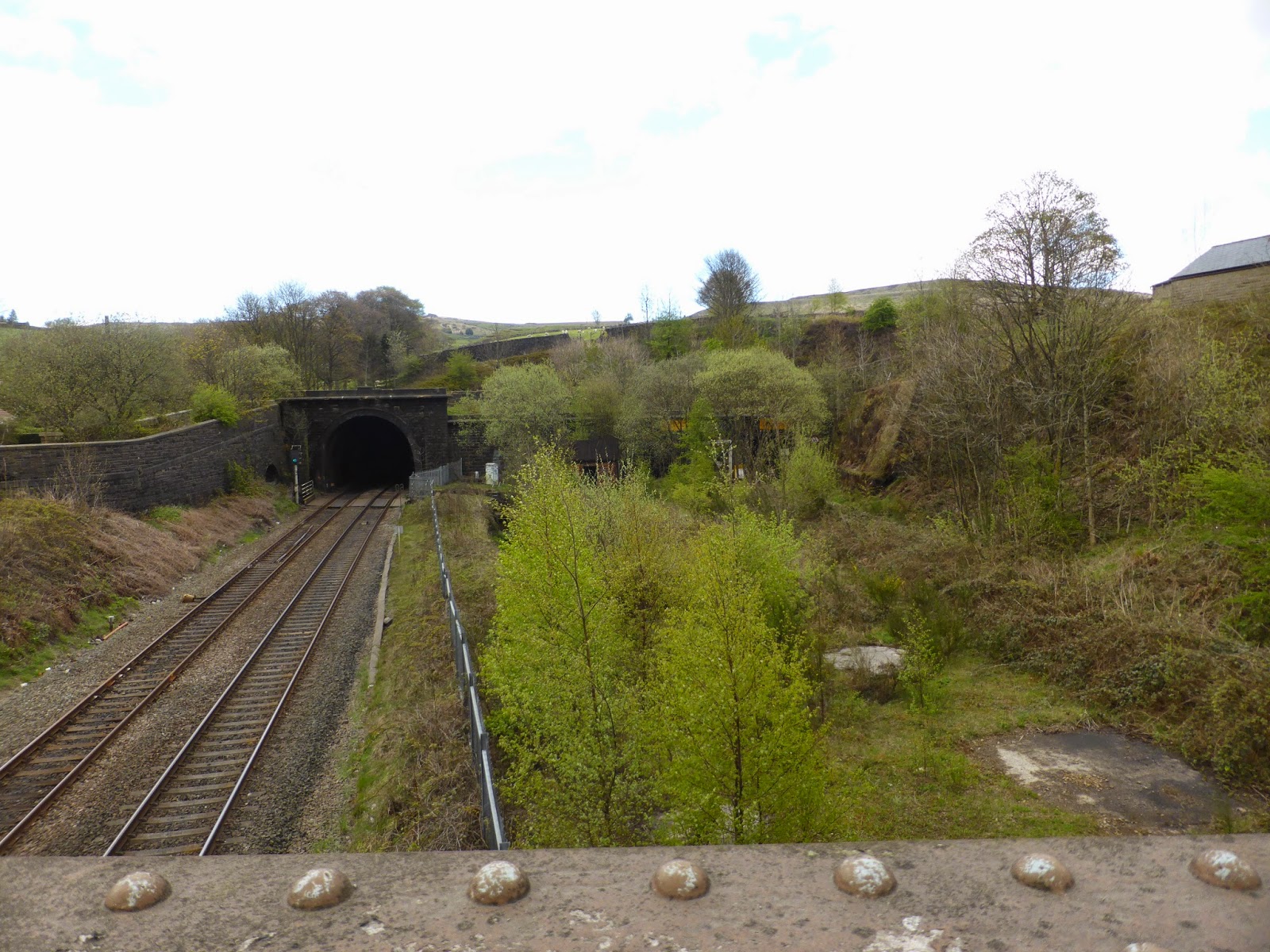 It was a long struggle in the wind and rain up the 11 locks but we made it and soon warmed up and dried out once inside.  After lunch we went for a walk around Diggle which has a few old mills.  This one is only 100 years old and is half occupied/restored.

The garden area of the craft/café unit brightens up the discoloured limestone. 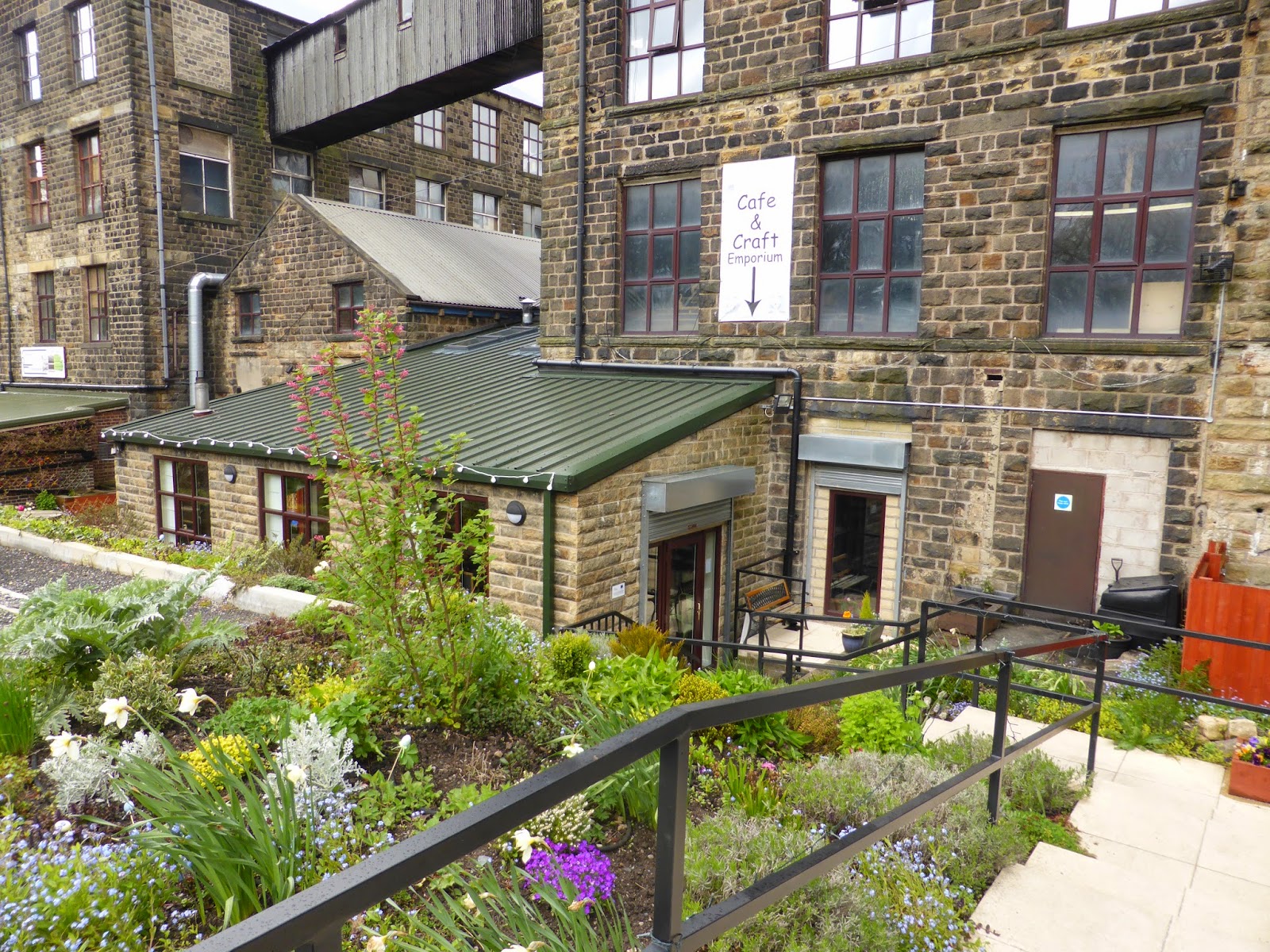 Here are the 11 locks we went up today. 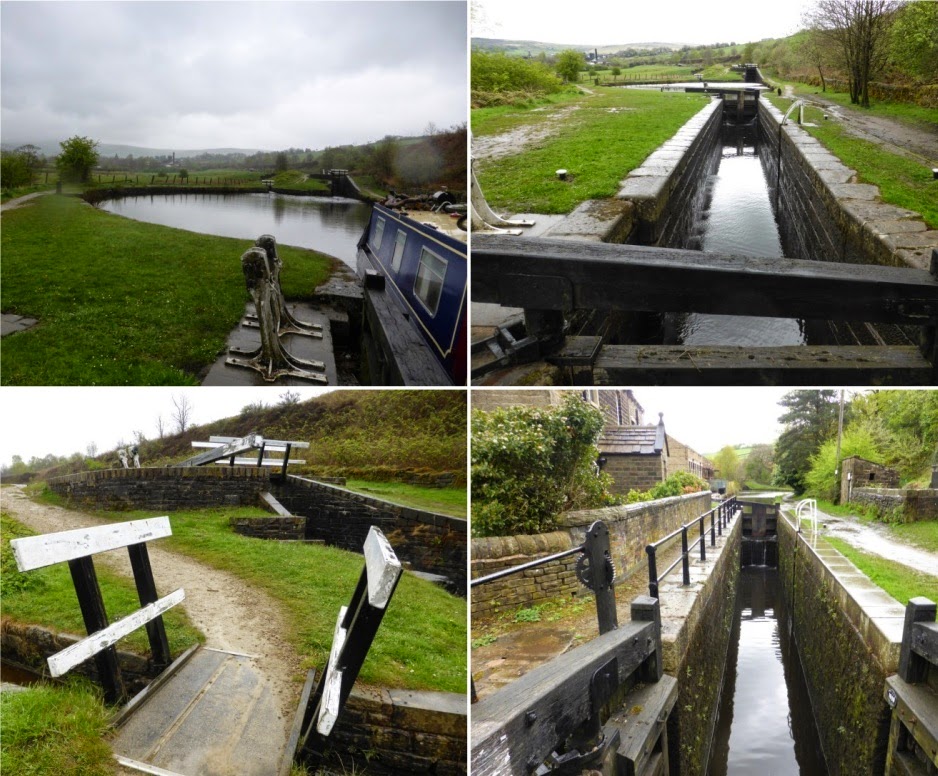 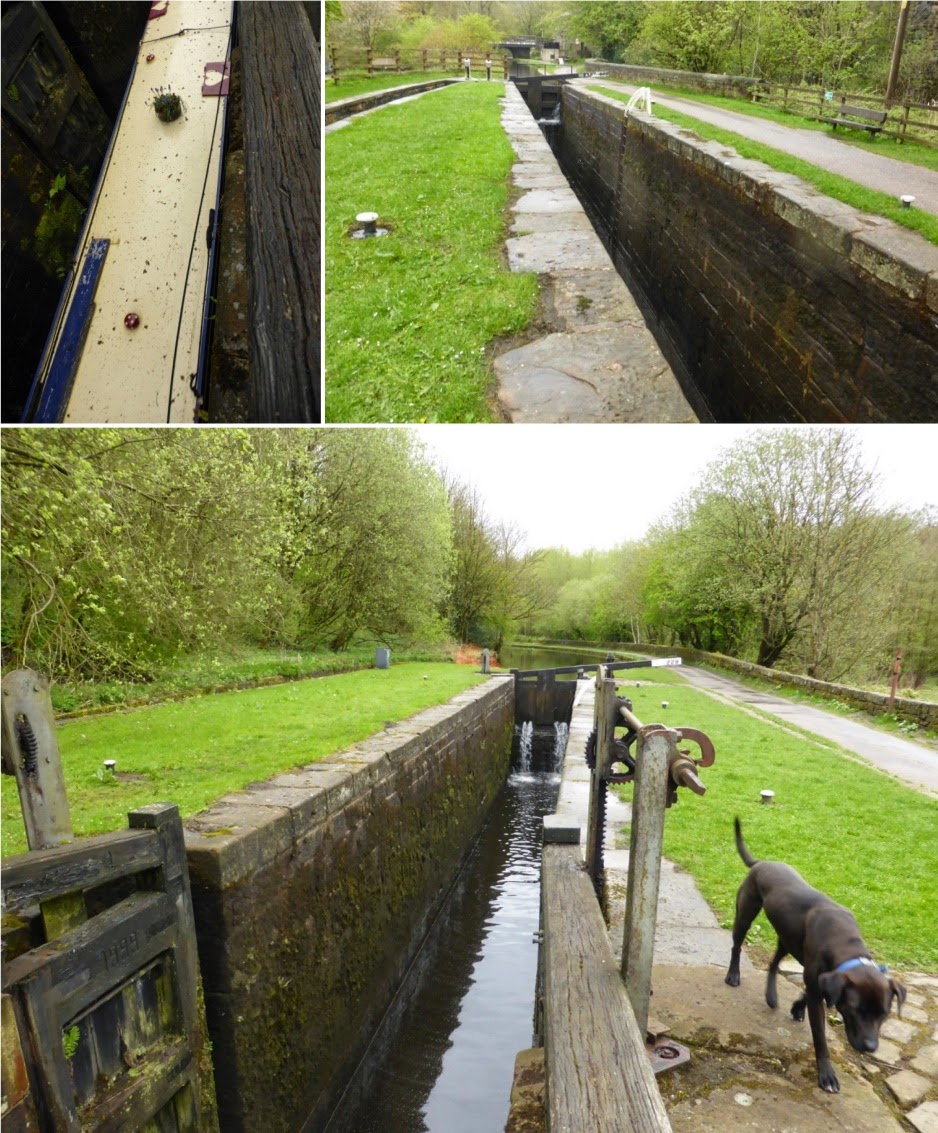