North on the Trent from Nottingham


The nightclubs we moored outside on Friday didn’t keep us awake in the night so we thought we may as well stay there for another night.  We were also opposite Nottingham’s comedy club so we got tickets for the Saturday performance.  As we were going to be in the city all day we took Buddy out for a long run out past Trent Bridge.  Here he is chasing yet another pied wagtail around a field. 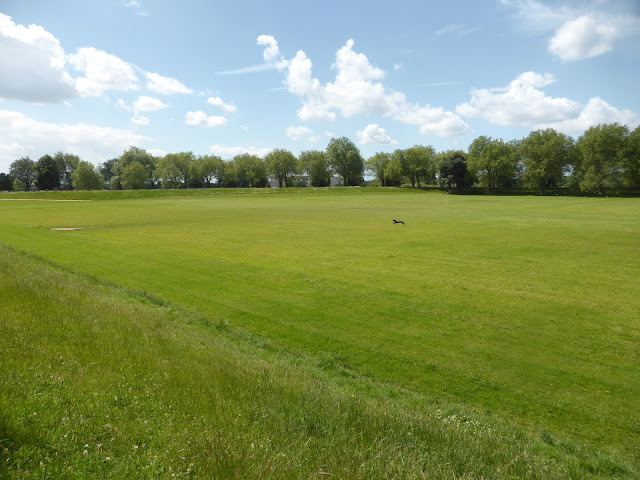 For once there were plenty of signs asking people not to feed human food to the wild birds. 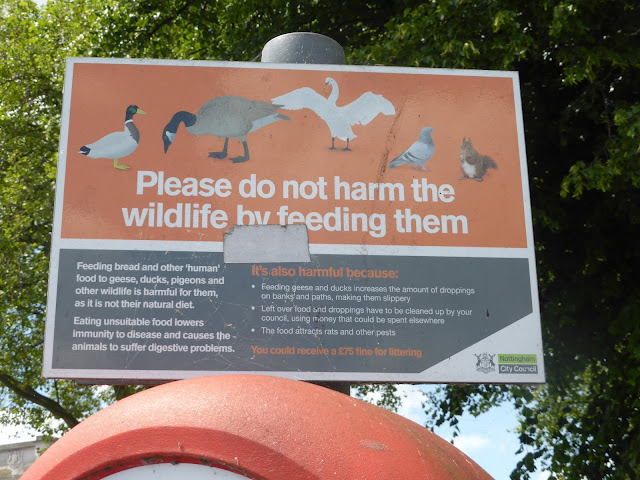 Walking under Trent Bridge we could see into Nottingham Forest’s football stadium – we could also see the floodlights at Trent Bridge. 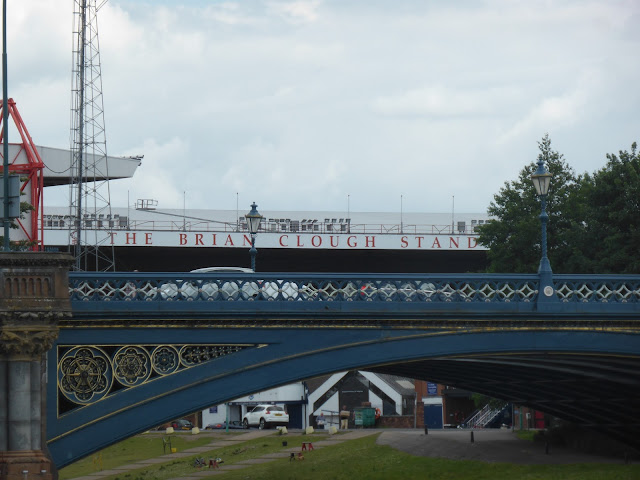 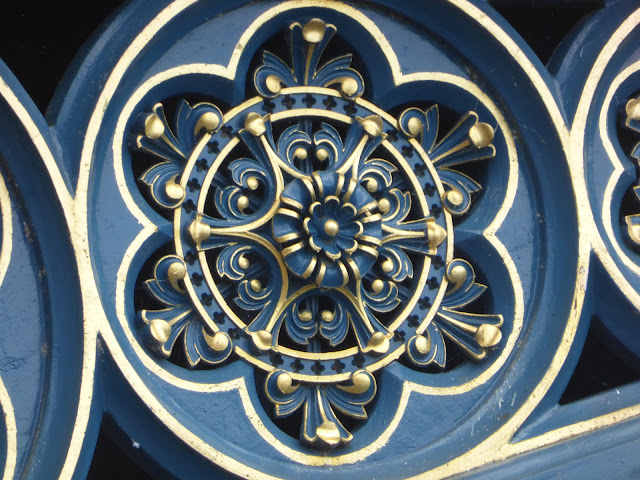 We lazed around in the afternoon as it was such a lovely day.  I spent a lot of it people-watching – the bars opposite us were doing a roaring trade – four different hen parties went through during the afternoon. 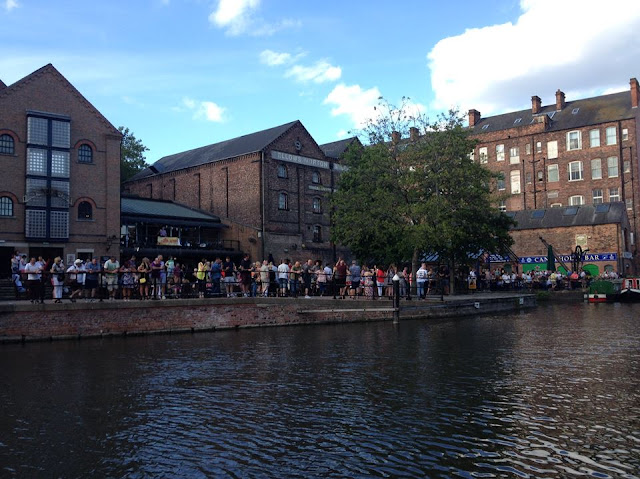 A family were walking along the towpath and one of the children let a football fall in the water.  The father was obviously embarrassed as he knew he couldn’t quite reach the ball and he knew he had a crowd of onlookers.  Fuelled by an afternoon drinking the lads in the bars started chanting, “In, in, in..”.  The poor chap, it obviously went to his head and in he jumped to retrieve the ball. 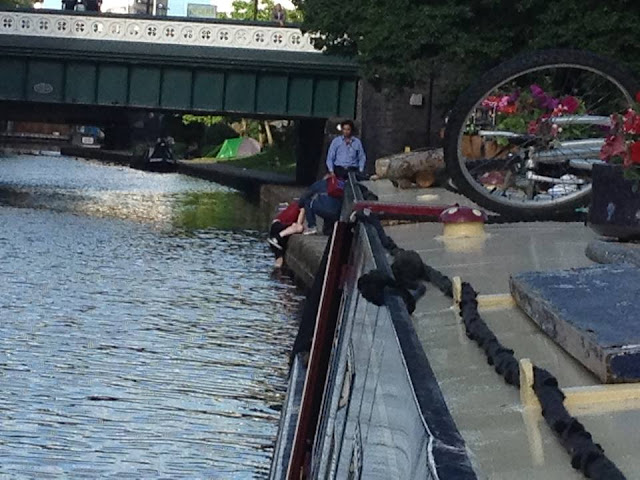 In the evening we went to the comedy club and Catherine joined us – it was great having a student as we got half price drinks – not that they encourage students to drink of course.
On Sunday we relaxed for a while and then set off down to the Trent.  We had to drop down one lock. 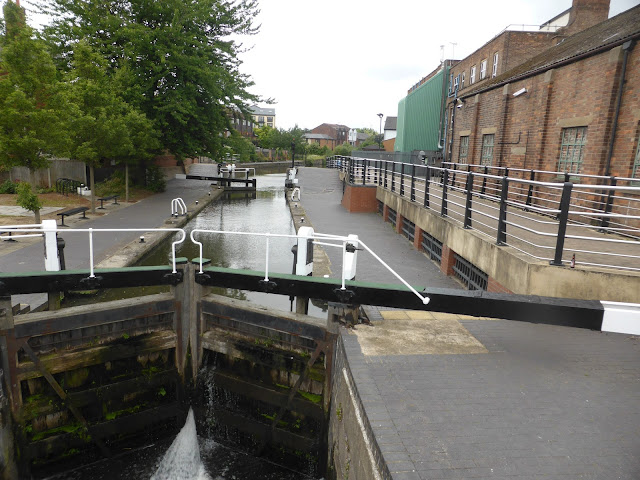 We came out of the lock opposite the football stadium we had seen yesterday. 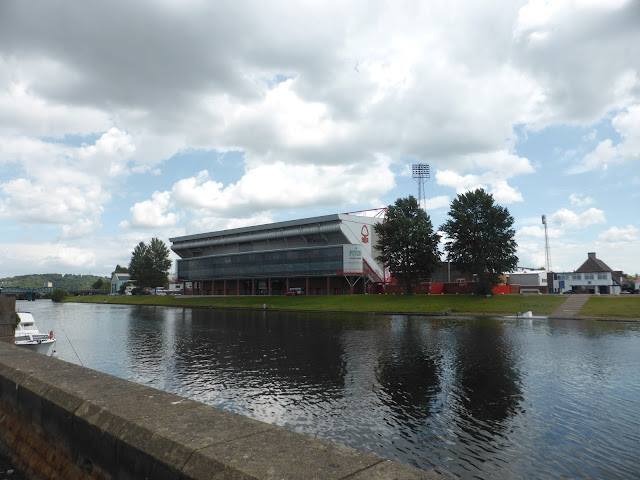 Joining the river we had to get used to large boats sharing the waterway with us. 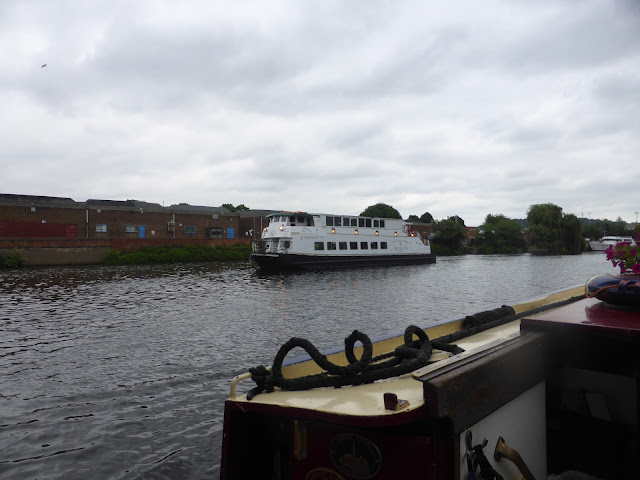 The mileposts were actually kilometre posts and are measuring the distance from Nottingham centre. 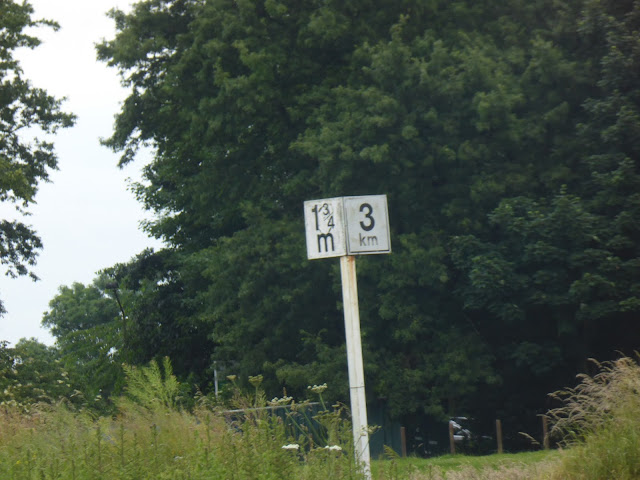 River cruising demands a different sort of concentration.  Here we have to avoid the weir on the left (behind the orange cylinders) and the start of a white water course on the right.  Not only that there tend to be a lot of plastic boats which you daren’t get near in a steel boat – there are several coming out of the lock here. 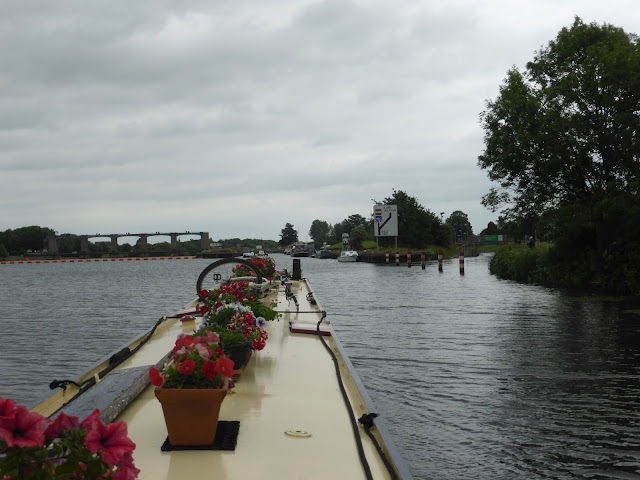 The locks on the Trent are manned during the day in the summer and we shared this one, Holme lock, with another narrowboat.  The locks are massive and could get six or eight of our size boat in if necessary. 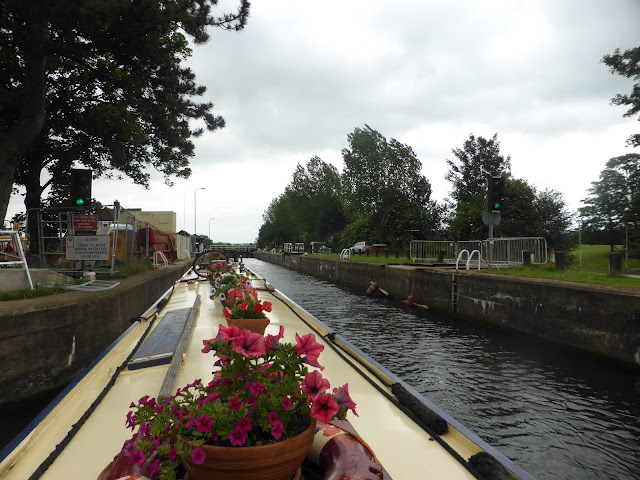 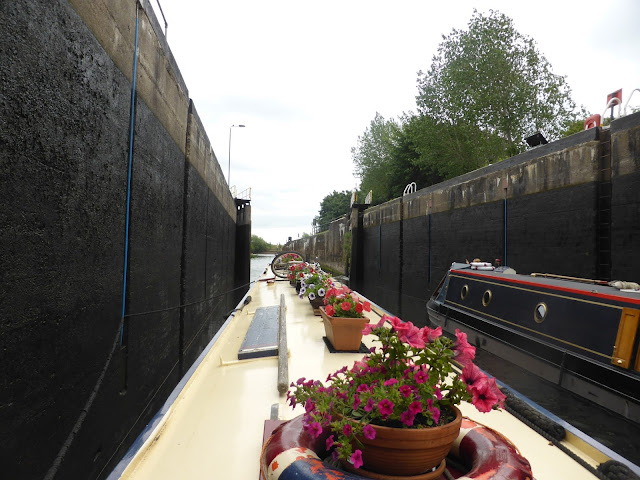 This was the start of the white water course... 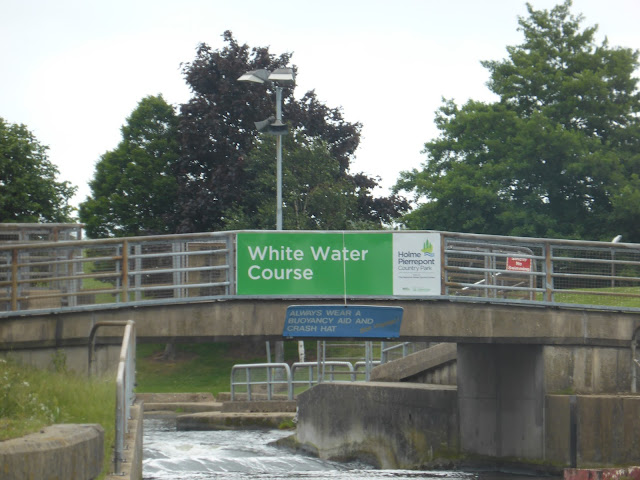 ...and this was the end – the flow coming into the river meant we had to crab along for a little while. 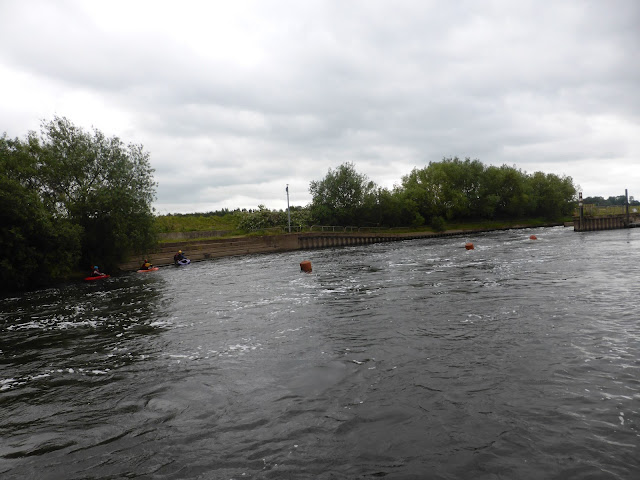 This is the Nottingham and Grantham railway line and we were fascinated by at least three different designs of the arches. 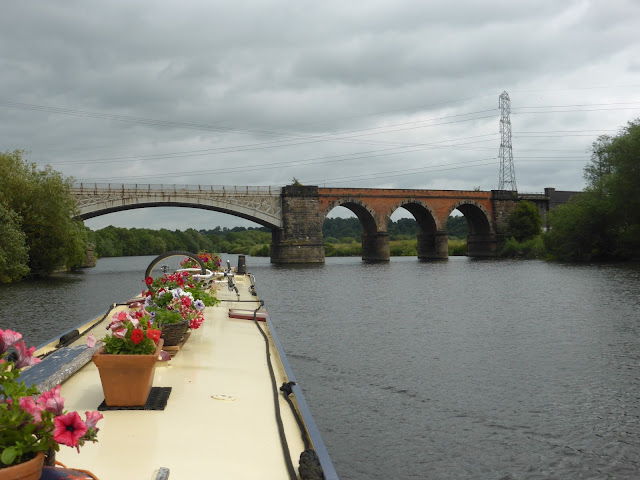 The main iron arch was cast in 1850 by a company from Lincoln – just imagine how that was transported in those days. 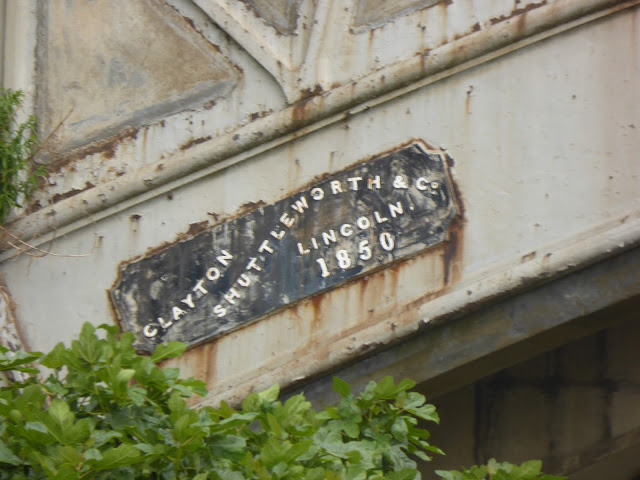 We moored for the night above Stoke lock... 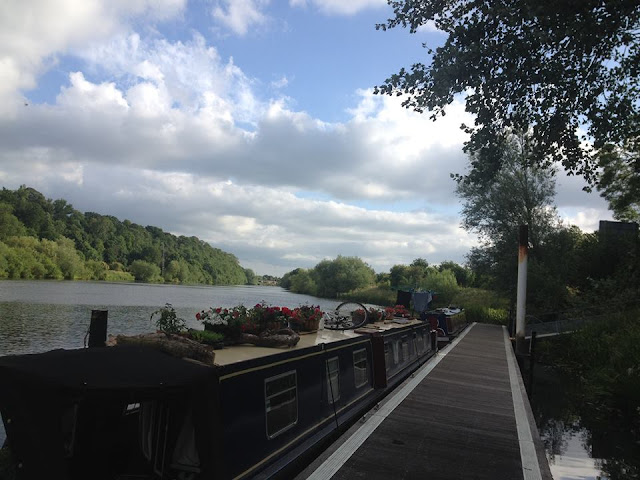 ...and went for a walk downstream – at least Buddy goes in the water on his own accord now, even though he still only paddles. 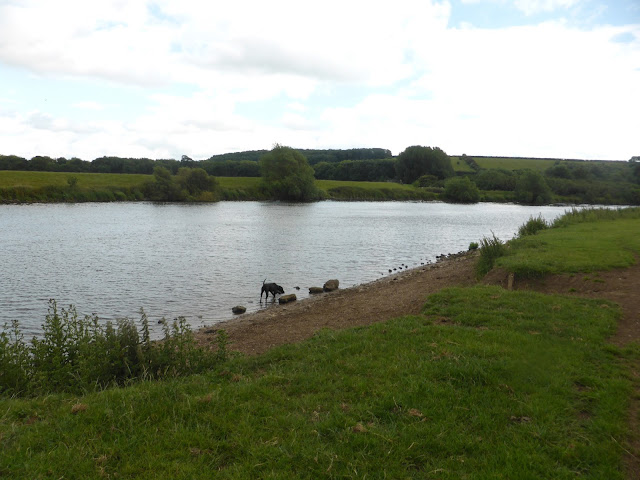