It's not PC to say vandal any more


We loosely planned to set off at 7 on Tuesday morning but it was practically 8 by the time we left.  It was clear and frosty with a promise of sunshine and blue skies.  We were excited and slightly dubious about the day.  We met a woman in Rugeley who had told us awful stories about the locals and travellers and the hassles you can get on the Wolverhampton lock flight which is why we were nervous.  In the end it was fine and really no different to any other large urban areas as all can be a bit like bandit country.  We always make conversation with dubious characters and so far it has always worked for us.

We set off for Aldersley junction at the bottom of the flight.  Here we are just after we turned off; it was before the sun came out and it was still frosty and I have no idea why I was saluting.  Neither does Buddy by the look of it. 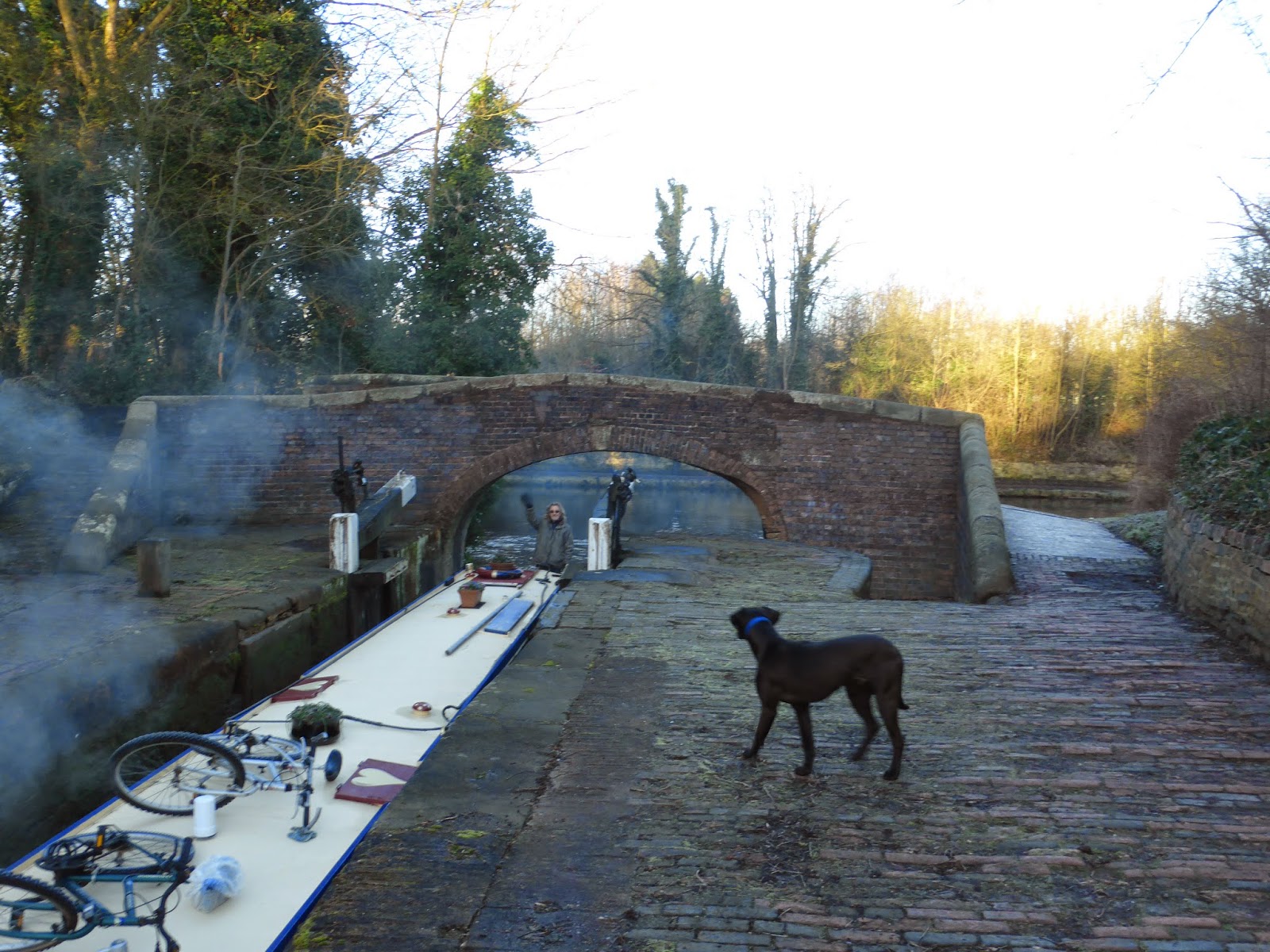 Once we had turned off at the junction it meant we were on a new canal to us, the Birmingham Main Line.  We soon saw the characteristic subtle differences of a change in canal.  The upper ground paddle gear were set at an angle. The bridges have name plaques only and no numbers and the plaques are rather plain. 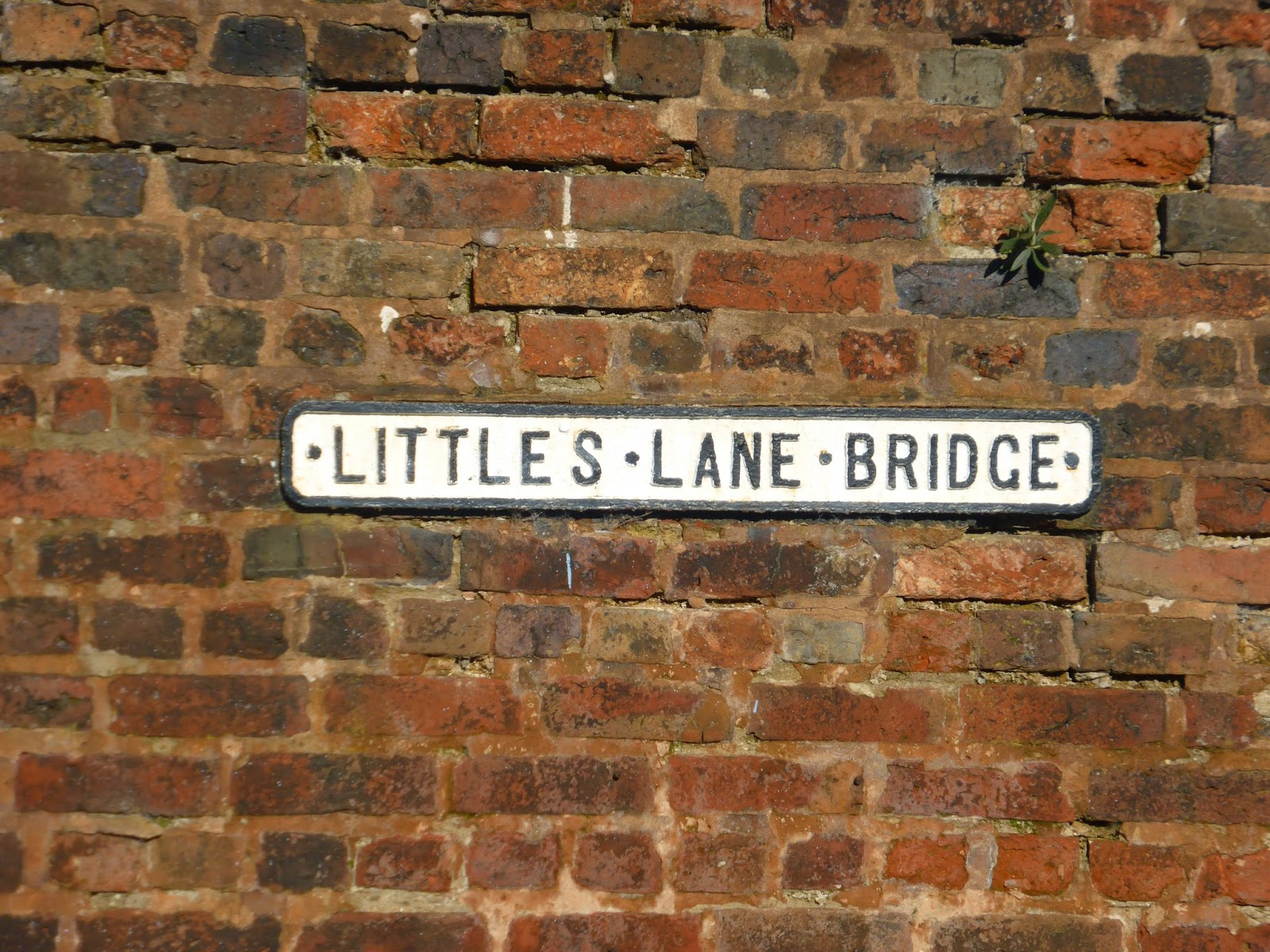 It took us four hours to do the 21 locks with a break for coffee and mid morning snacks half way.

Each lock paddle is fitted with an anti-vandal lock which boaters can open with a special anti-vandal key.  Many locks in the Midlands are fitted with these locks as so many paddles used to get vandalised and water lost.  For the politically correct the keys are now referred to as water conservation keys. The metal cylinder protruding horizontally (on the picture top left) stops the paddle being wound up and it can only be released with the anti-vandal key. It is  shown retracted in the top right picture and you can see the shiny key in the bottom picture. 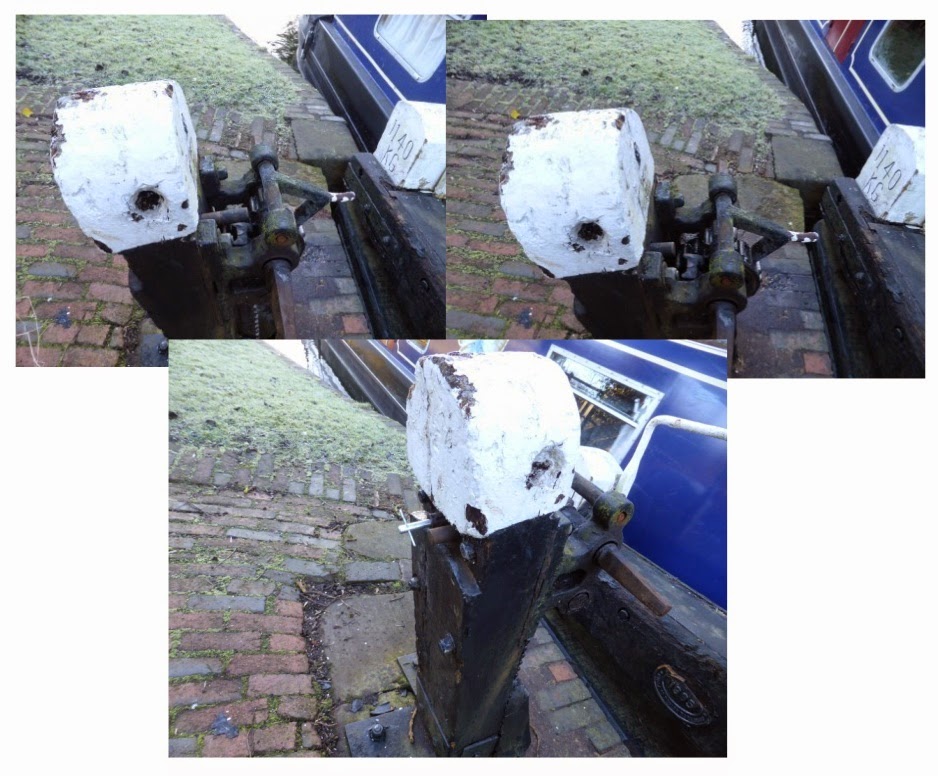 The first few pounds were partly frozen over but not enough to hinder our progress.  About half way up there was a longer gap between two of the locks and we went under this viaduct.  The canal arch is set at an angle to all the others which felt a bit strange going through it. 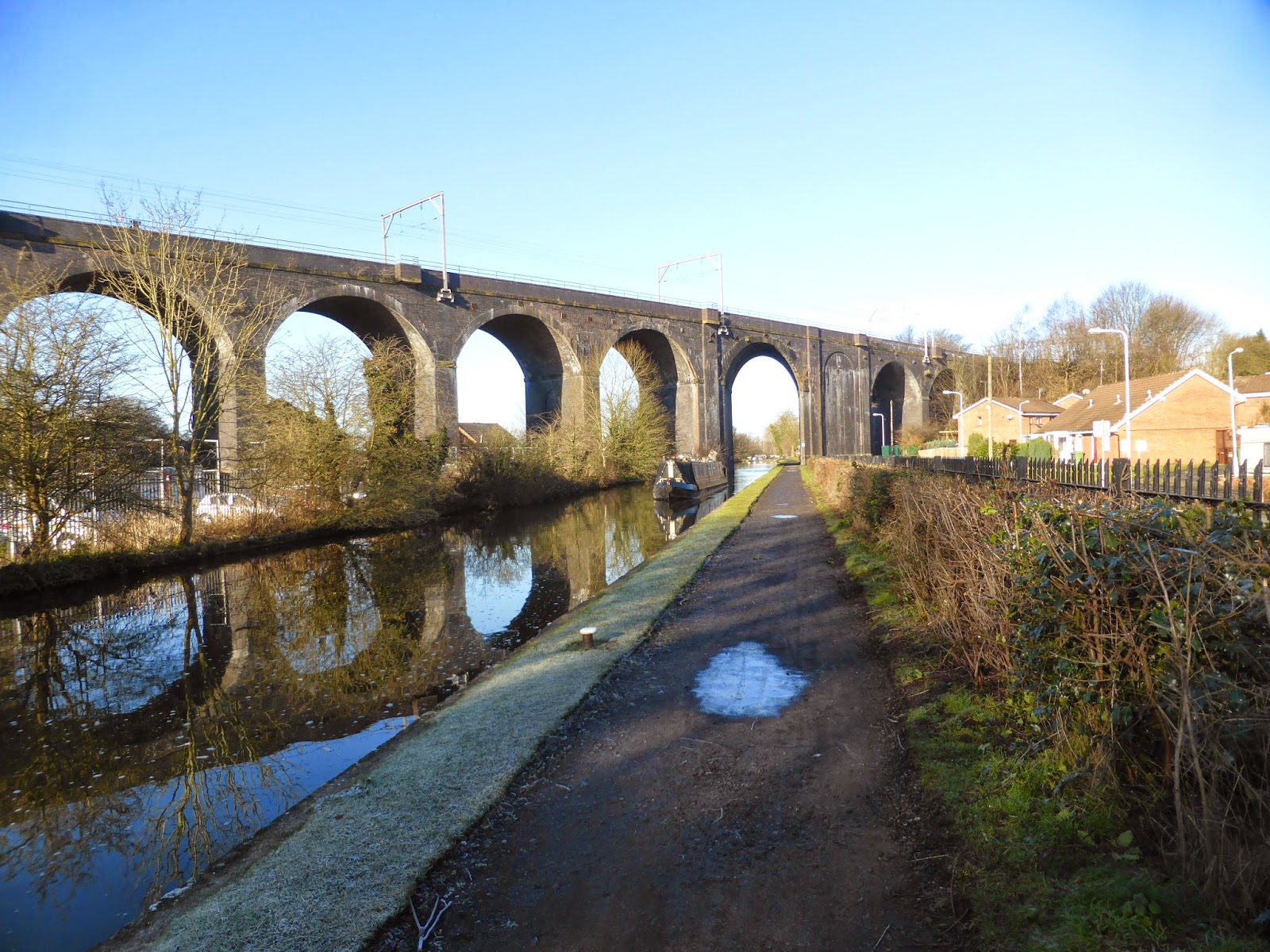 Just to prove I do a bit of physical work, here I am opening the top gate of lock 17. 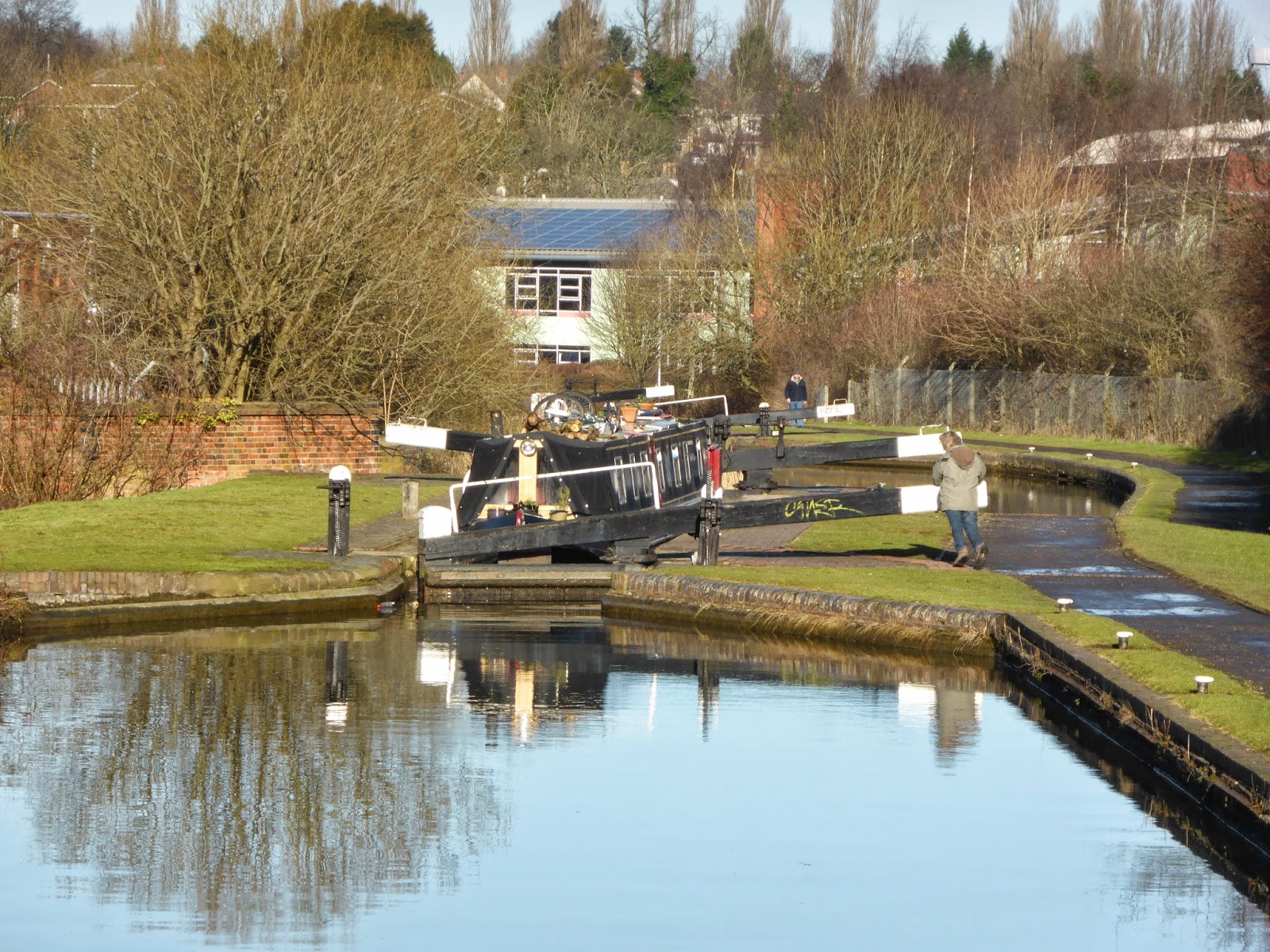 At the top of the flight, which is a rise of 132 feet we were in the middle of Wolverhampton just by the inner ring road.  Apart from this cleaned up factory it didn’t look a particularly nice place to stay so we did our recycling and carried on. 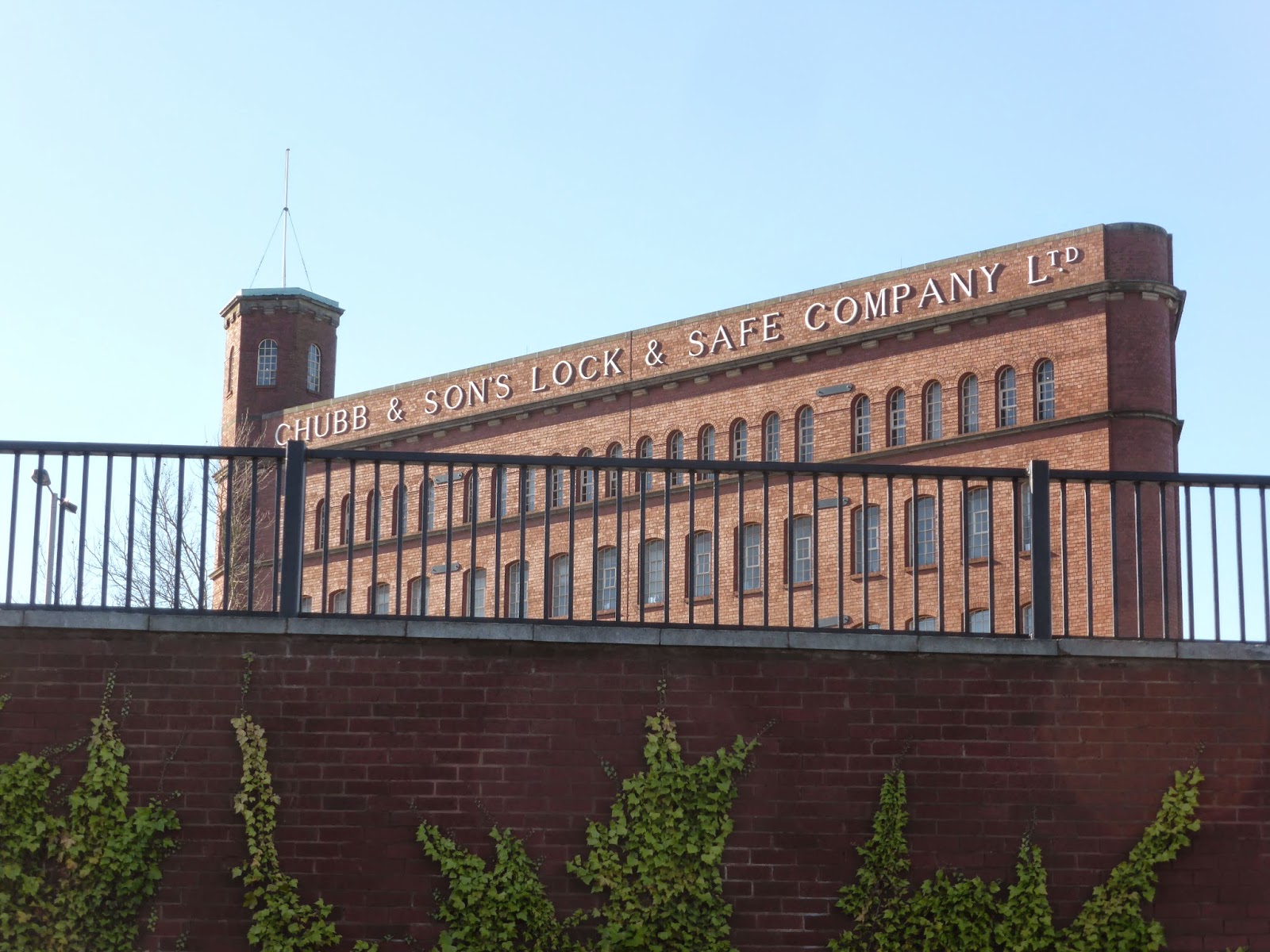 Even though the sun shone all day it did become windy during the afternoon which made it feel quite chilly.  Buddy knows that he gets a treat at the end of each lock so is always well behaved for Karen.  By the time we got to the top he was getting bored so ended up snoozing rather than sitting patiently. 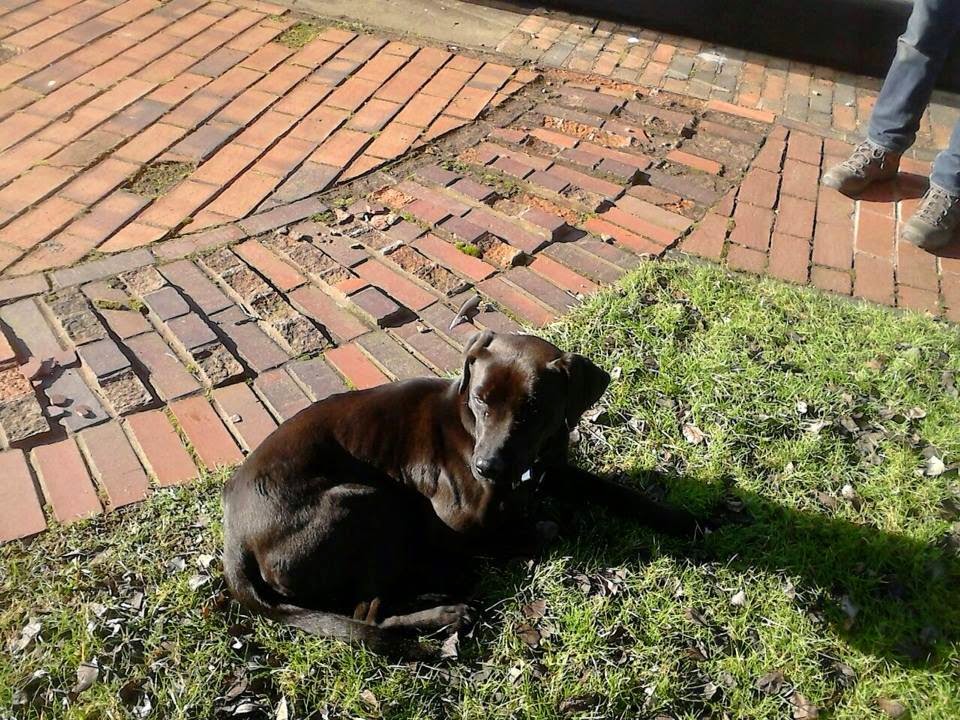 Nearly all of Wolverhampton that we passed through was old and industrial.  Many warehouses are now derelict or demolished and replaced by modern low rise warehouses which are also now derelict. 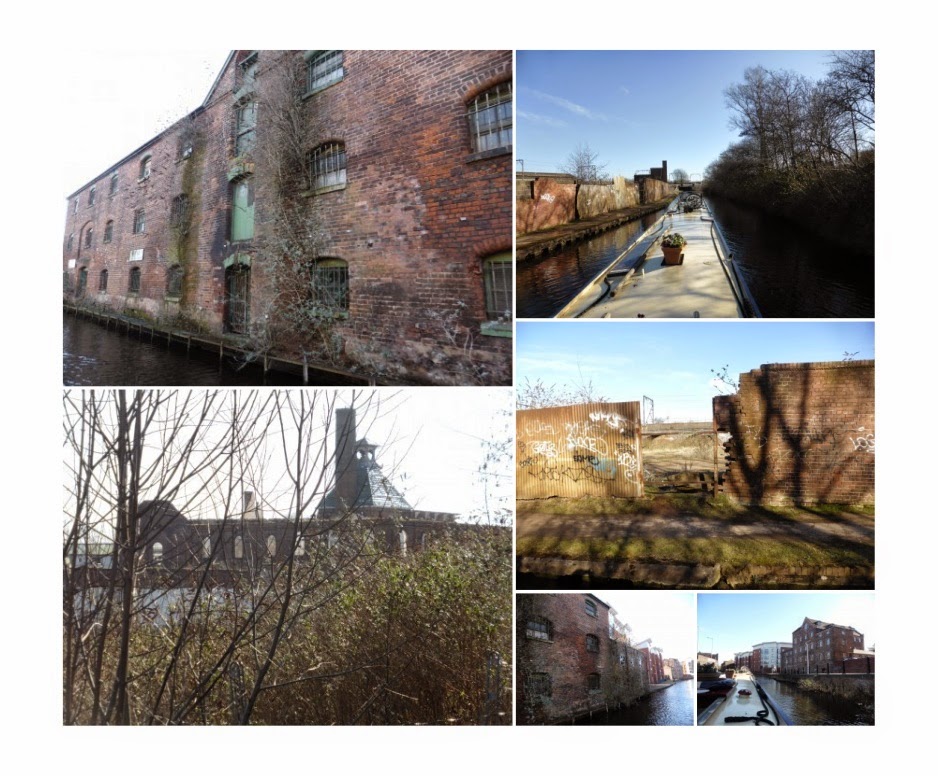 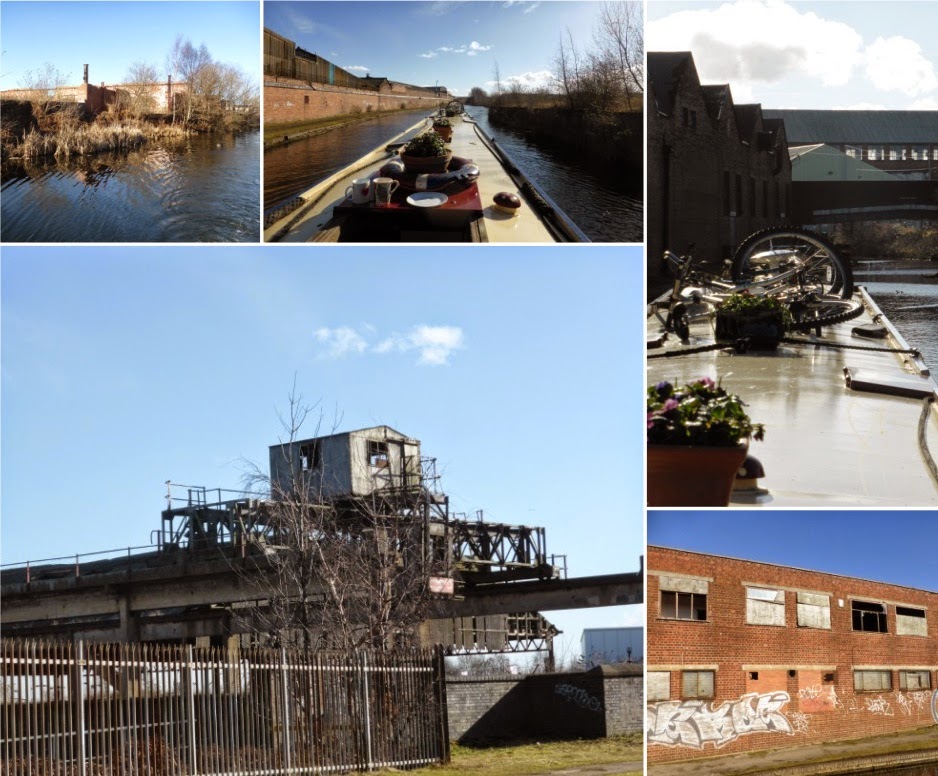 We only had to stop twice to clear plastic bags from the propeller.  We had expected to stop more often so that was pleasing especially as the water is so cold at the moment.

We went through several junctions.  First was Horseley Fields junction where the Wyreley and Essington canal heads off east.    The canal is affectionately known by boaters as the Curly Wurly. 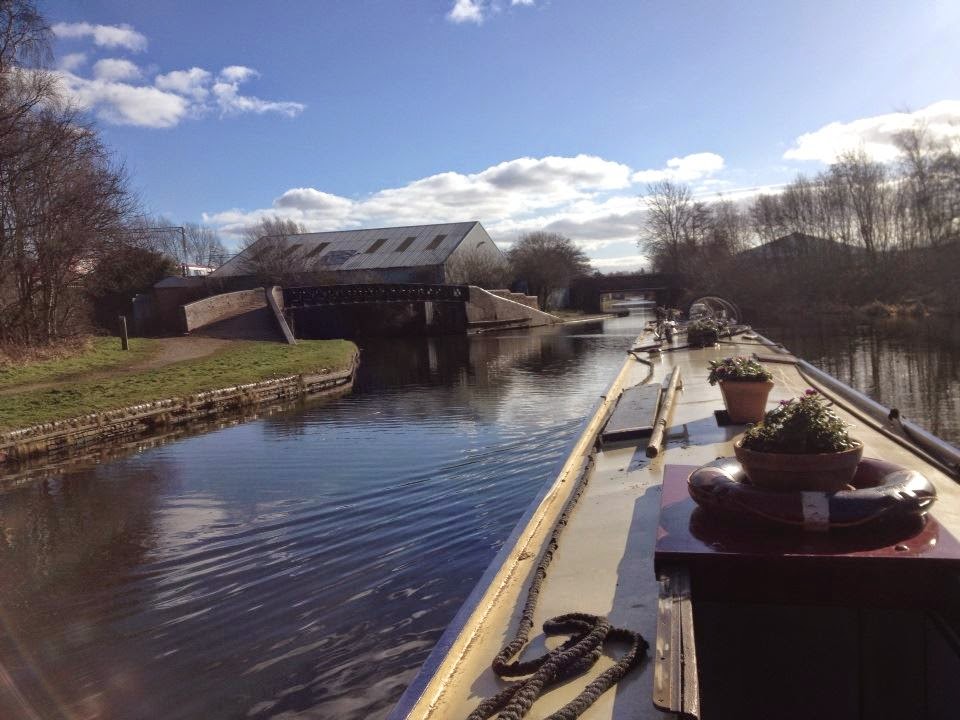 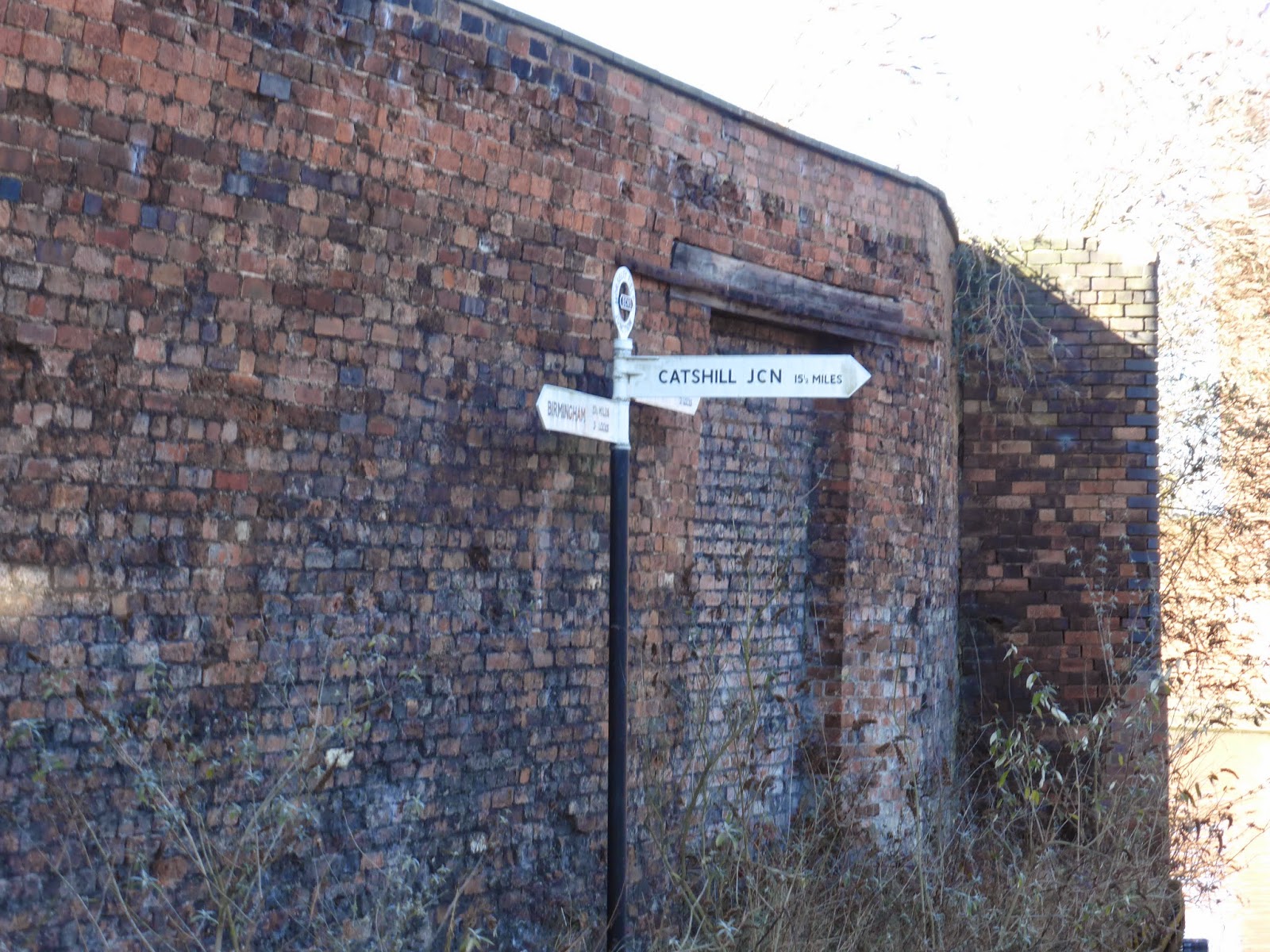 We then passed Deepfields junction where the Wednesbury Oak canal leaves to the east. 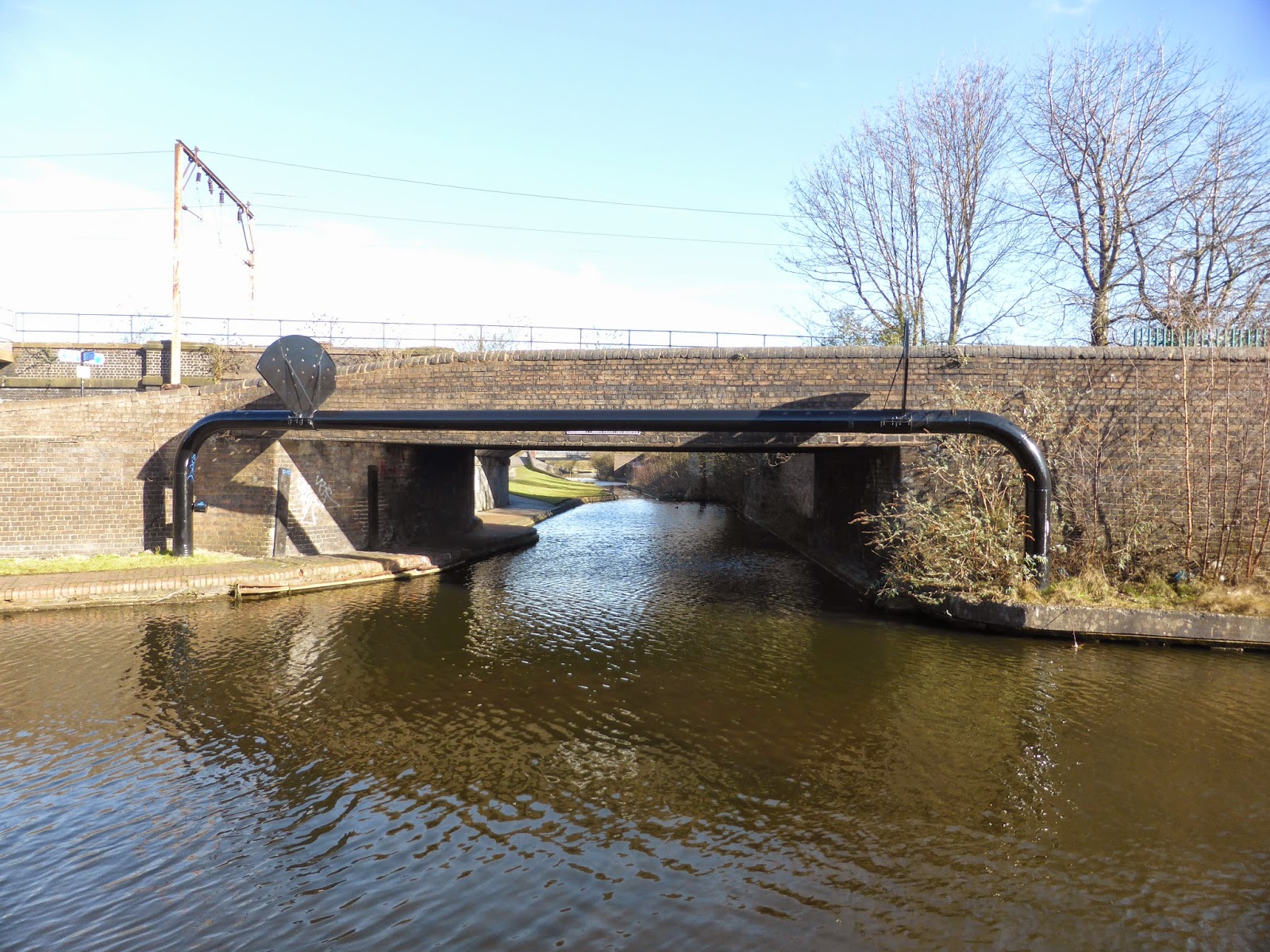 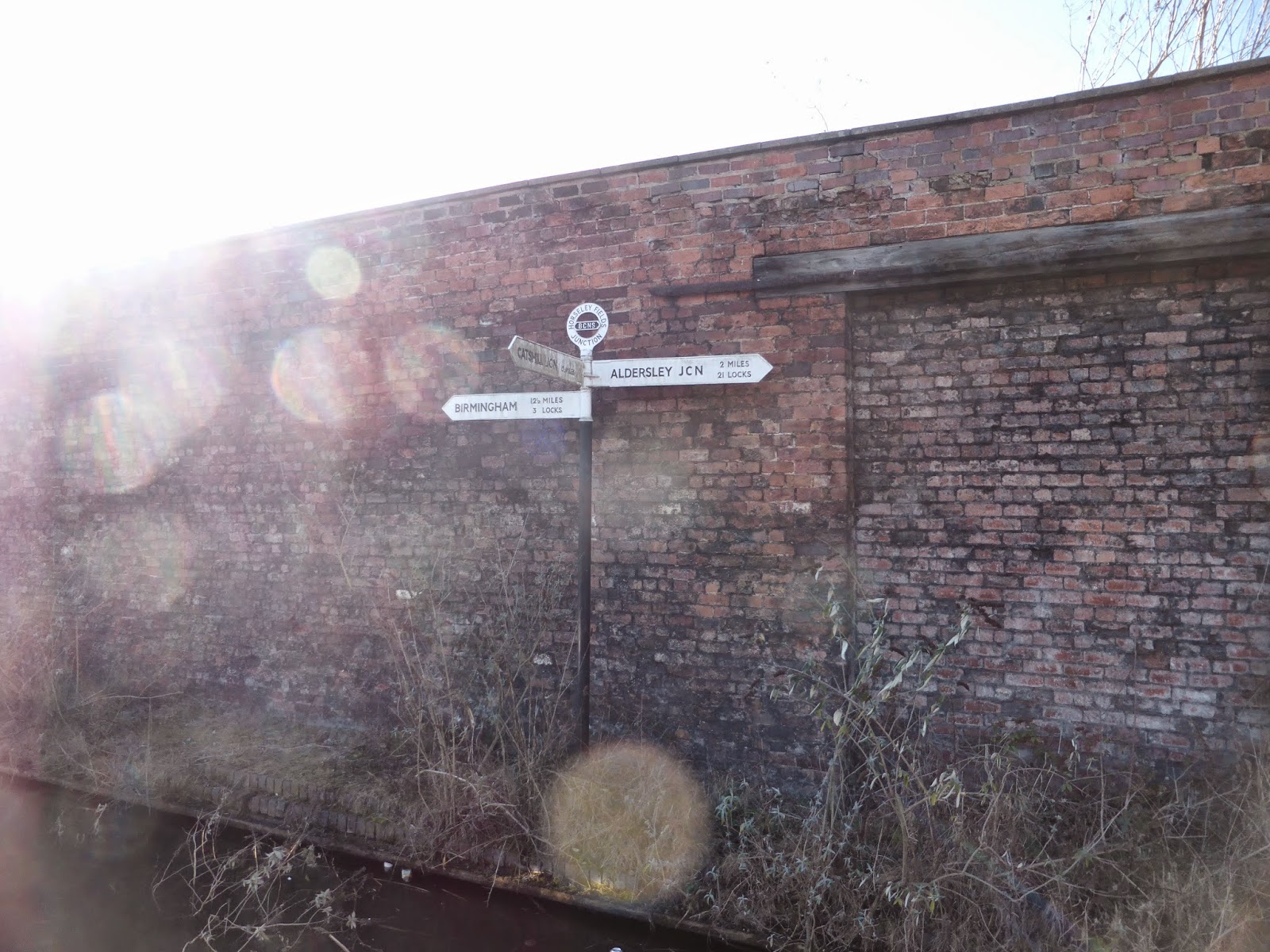 We also passed several other junctions which are now disused.  60 of the original 160 miles of Birmingham canals are no longer navigable but many are being restored. 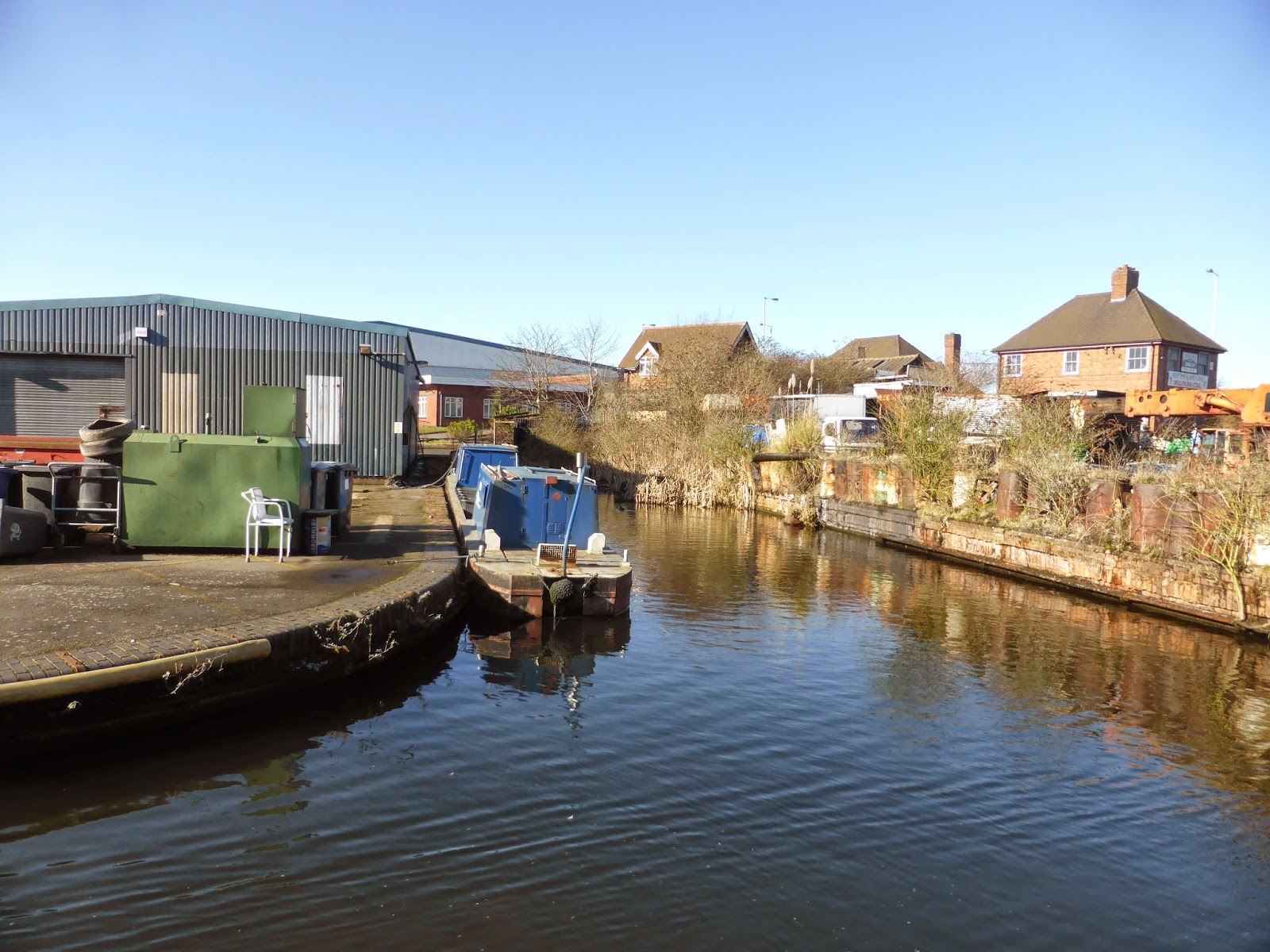 Karen suggested we moor to these novel mooring rings under a bridge!  We have no idea of their real purpose. 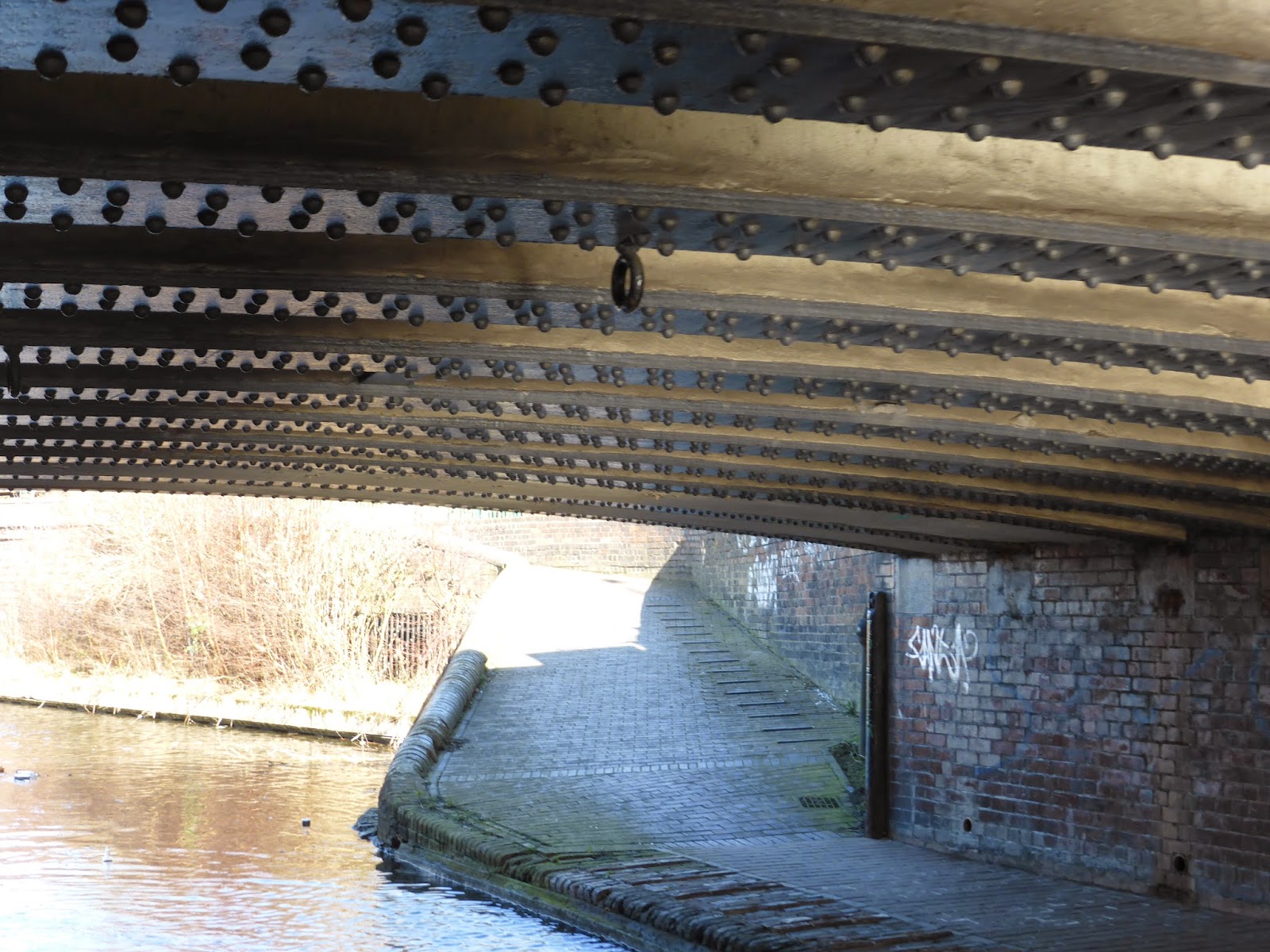 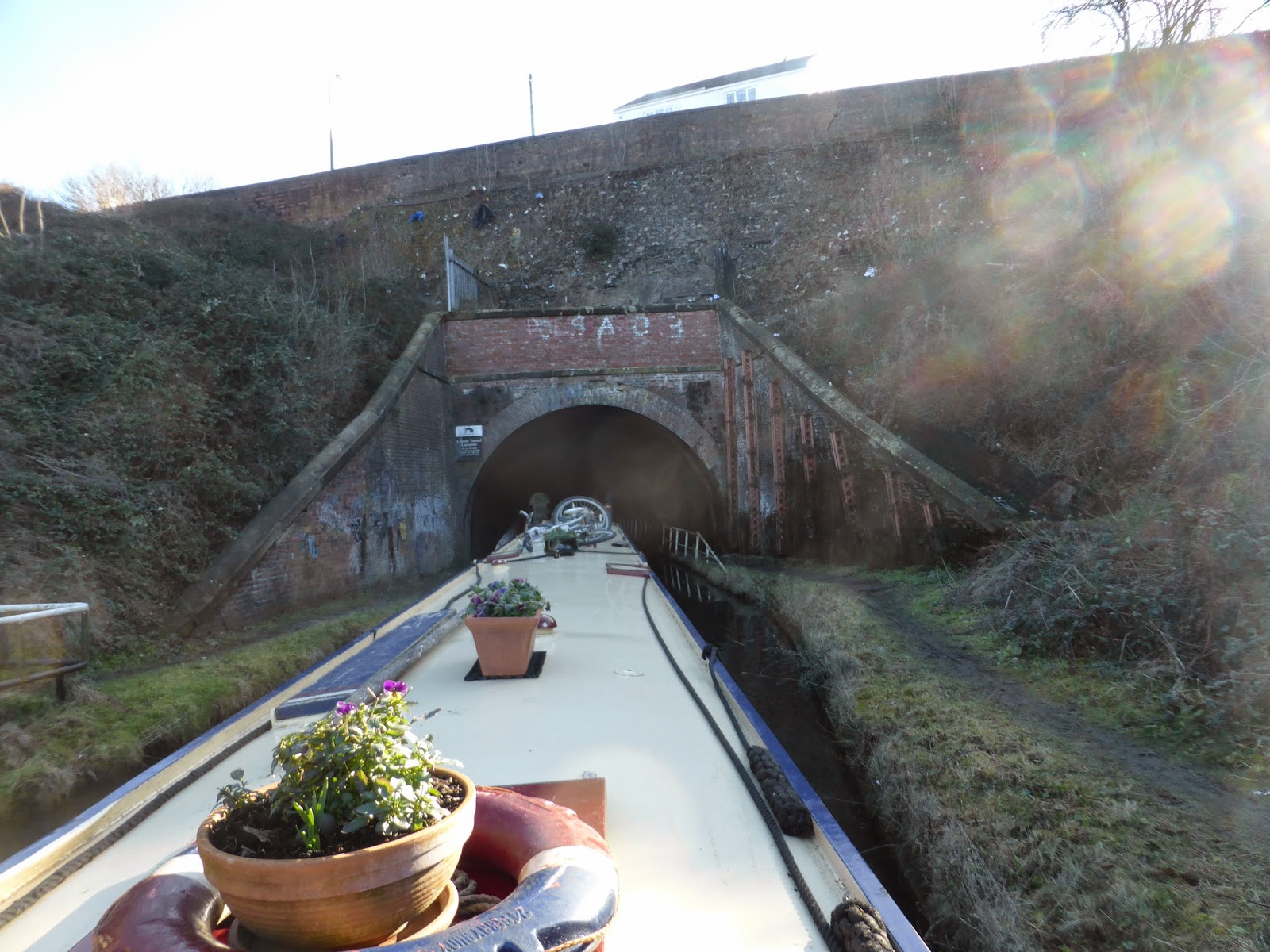 We are now about eight miles from the centre of Birmingham and have a large number of routes to choose from.  We don’t have to be there until Friday evening so we have plenty of time to try out different places.

Karen won’t like me saying it but she looks really healthy especially as she has caught the sun. We both feel exhausted but really happy and contented.

Here are the other 18 of the 21 locks that are not in  the pictures above.  They were surprisingly rural looking considering we were in Wolverhampton. 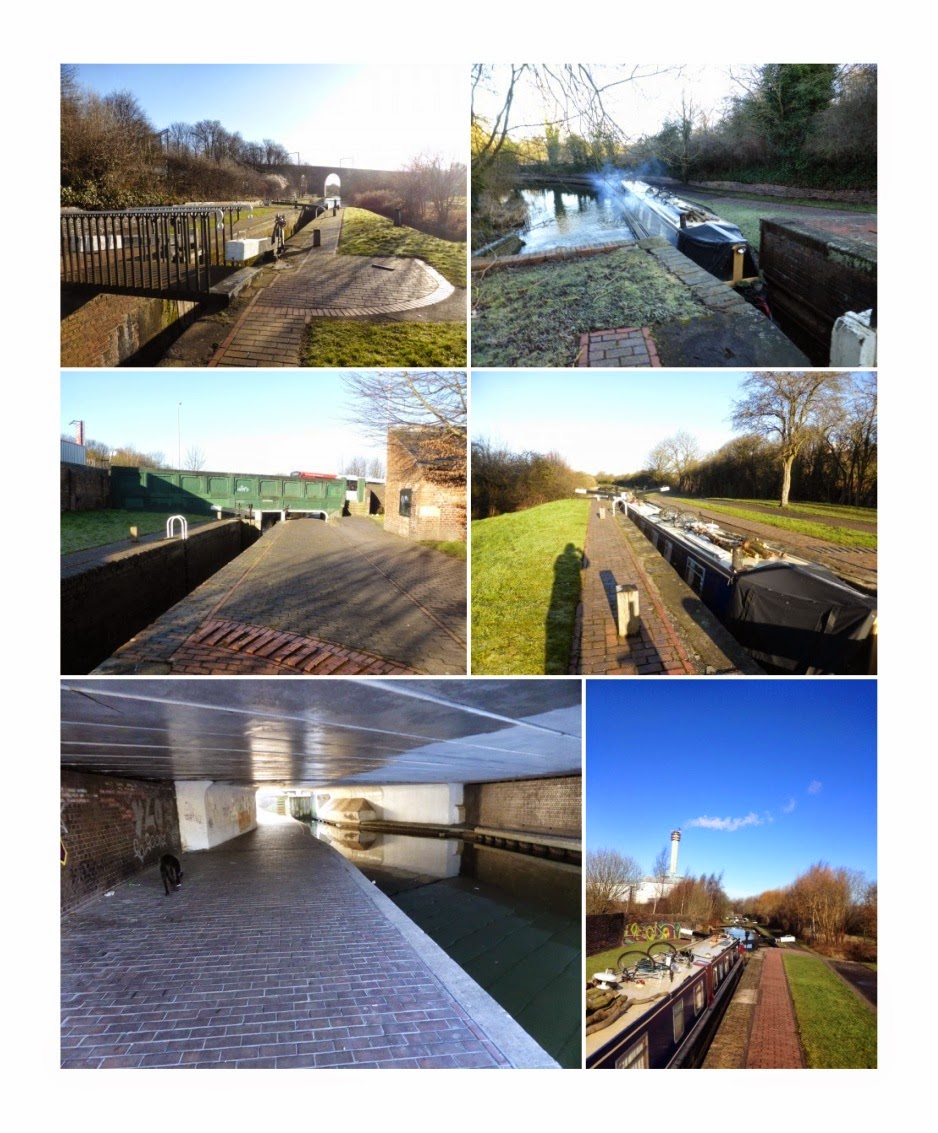 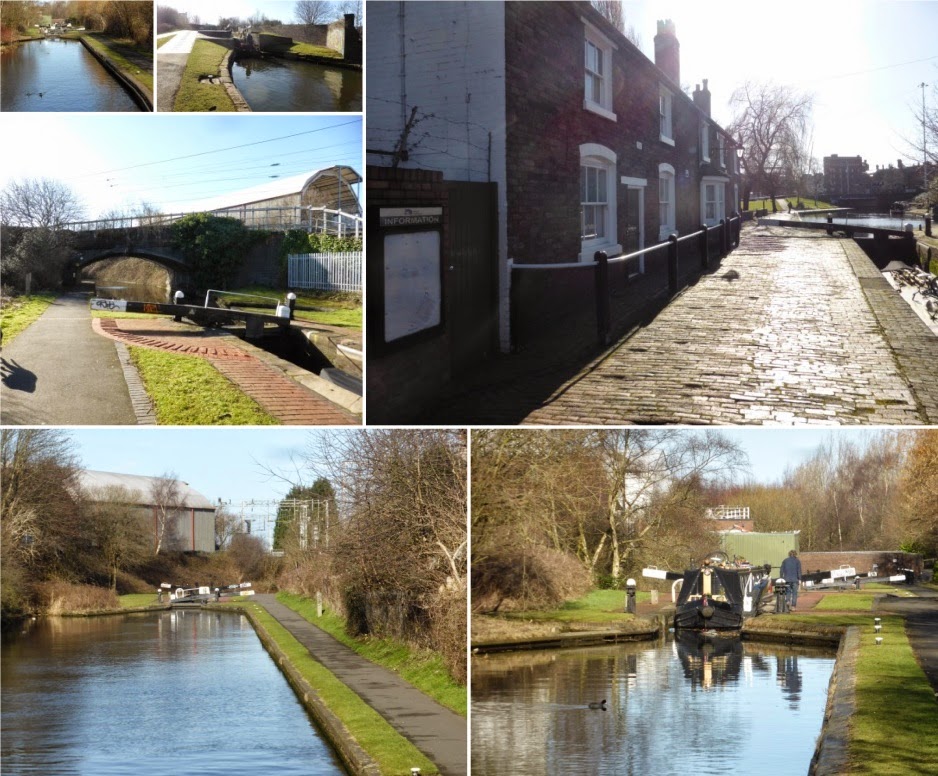 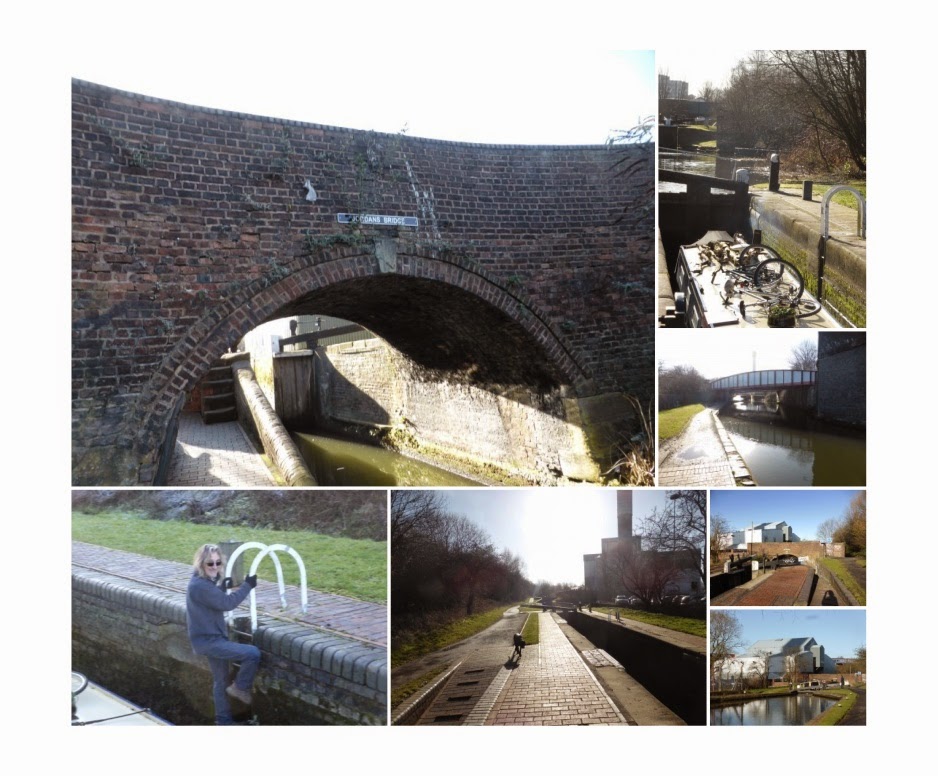