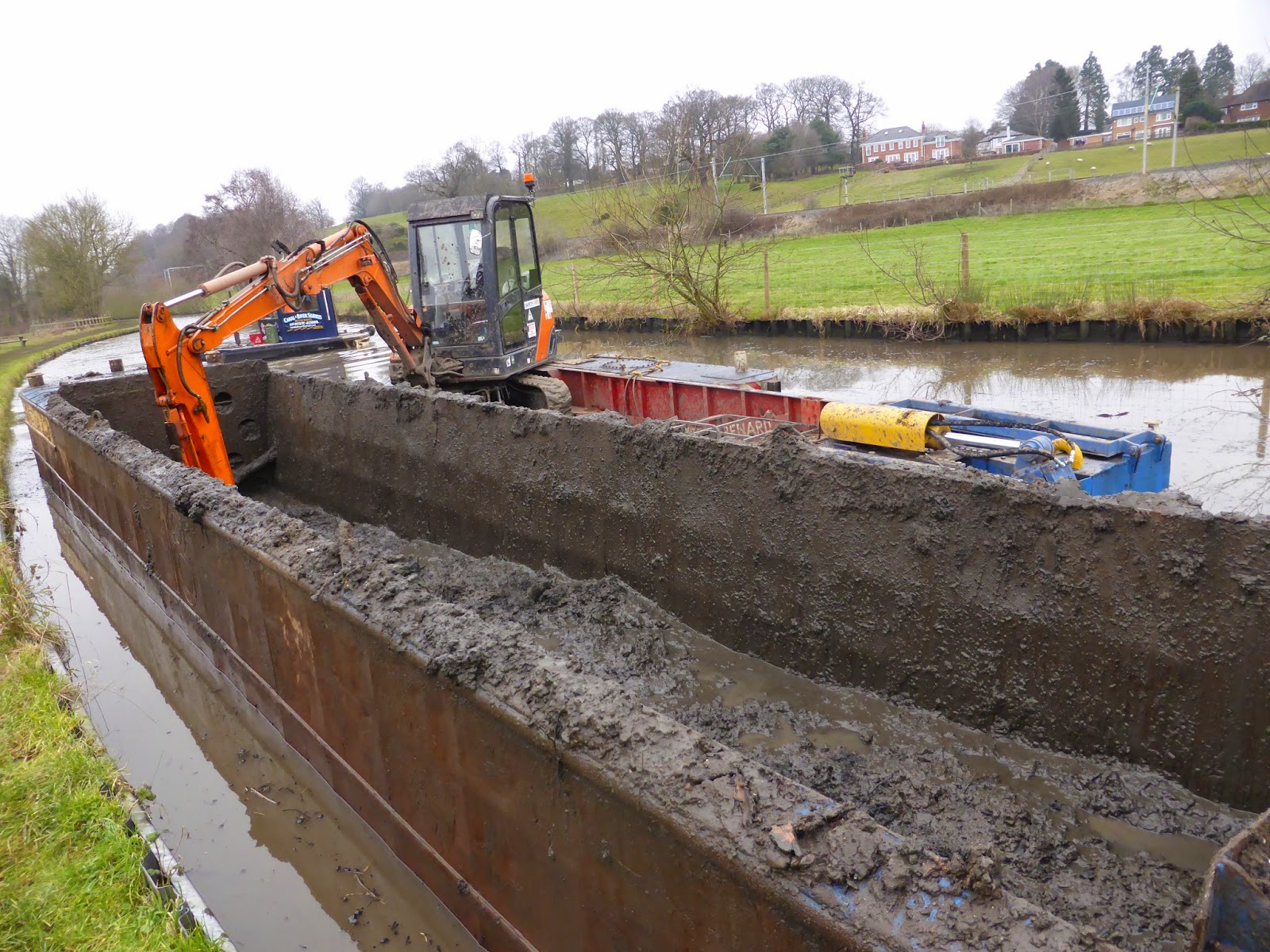 We were woken up early on Thursday morning even though we were in the middle of nowhere at Little Haywood.  Dredging operations had started 100 yards from our boat in the dark at seven!

We decided to take advantage and get a move on especially as rain is forecast for the next few days. The guy in the dredger asked us to pass slowly as the boats weren't moored to the side.

Karen got this picture of a working tug breaking all the speed rules.  If there is a wash against the bank then it is too fast.  The main reason being that the banks get eroded and therefore more maintenance is required. 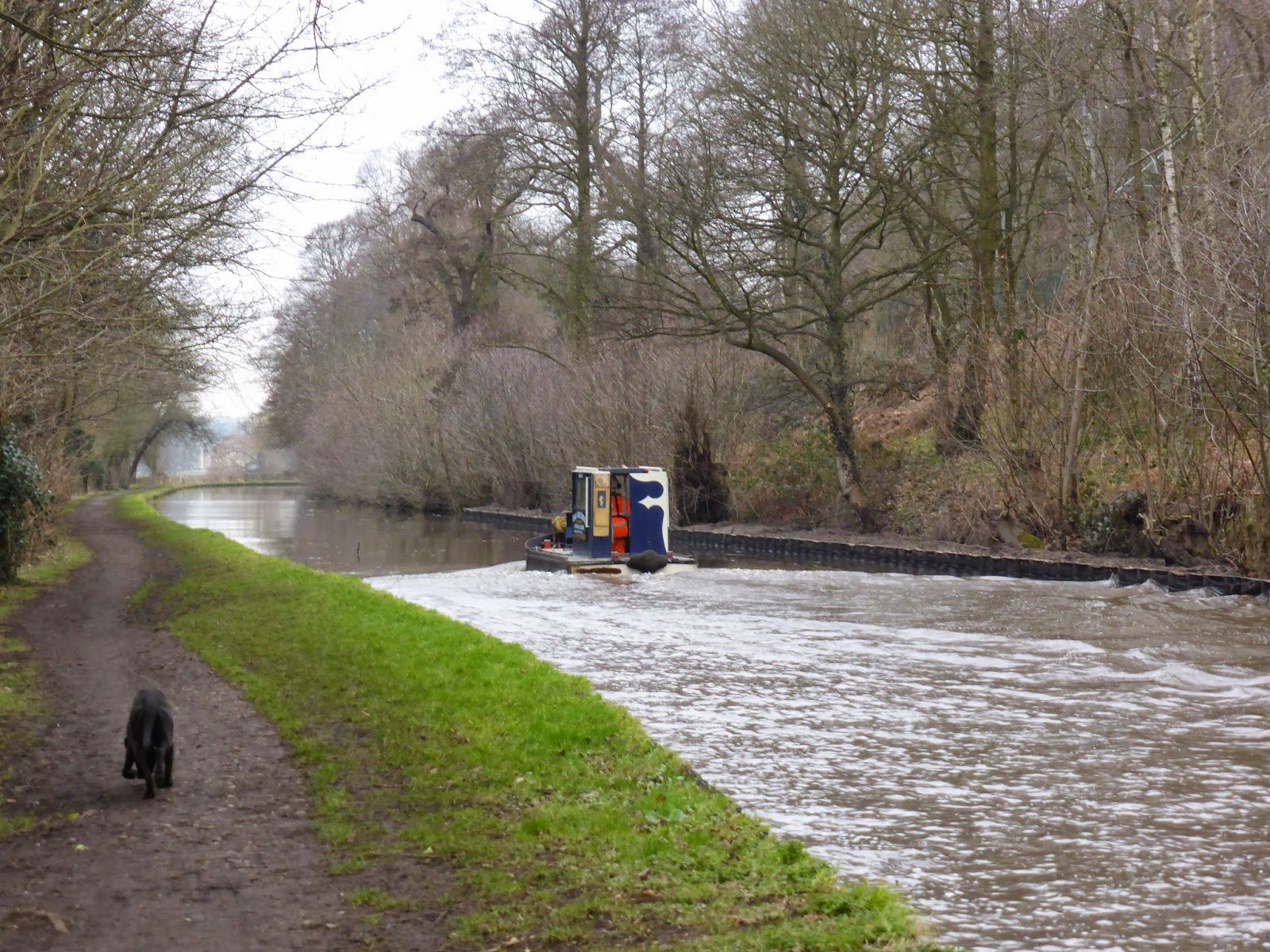 We passed Shughborough Hall which is an impressive sight. 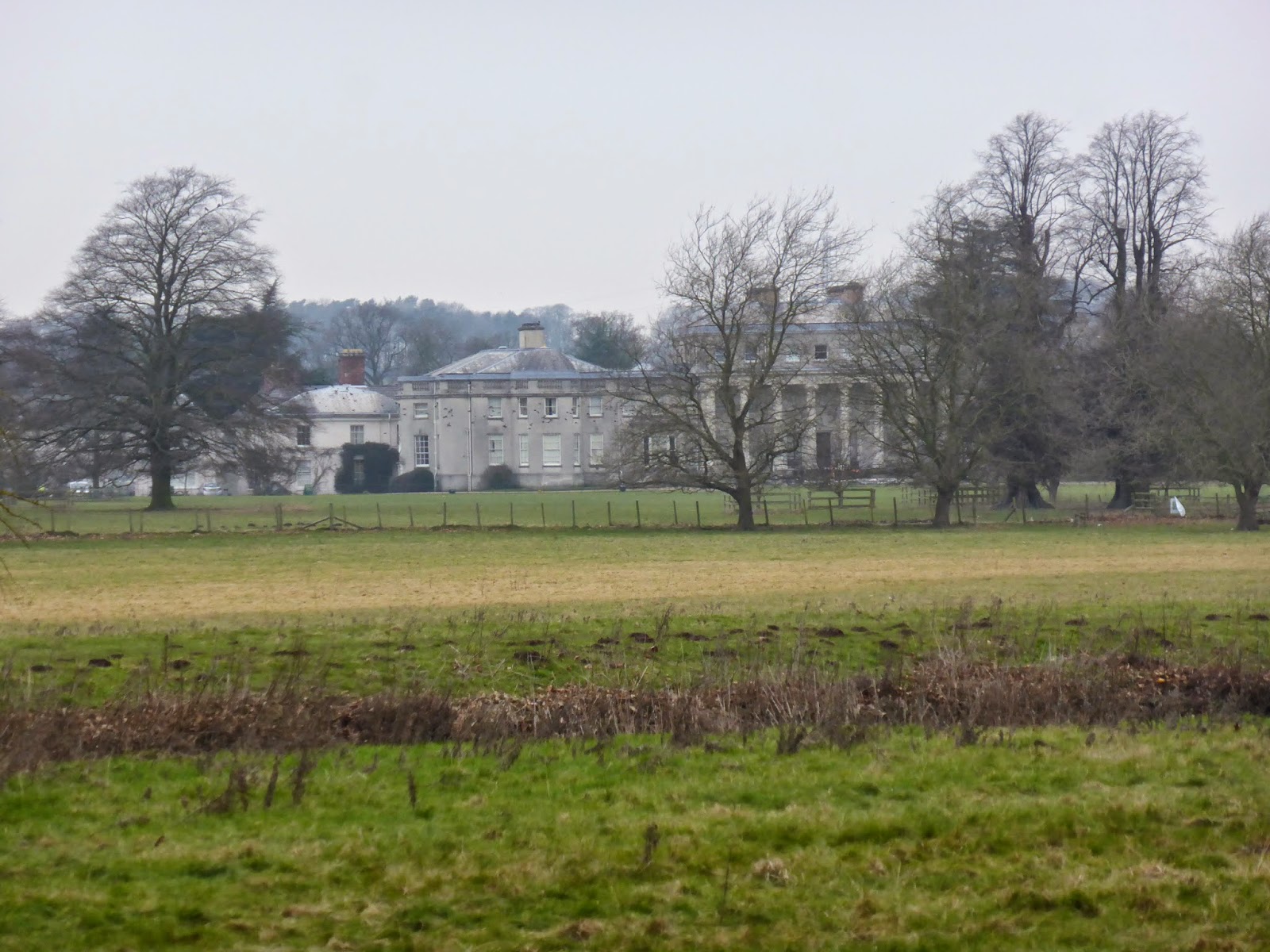 Here is one of the ornate driveway bridges built for the hall when the canal was built. 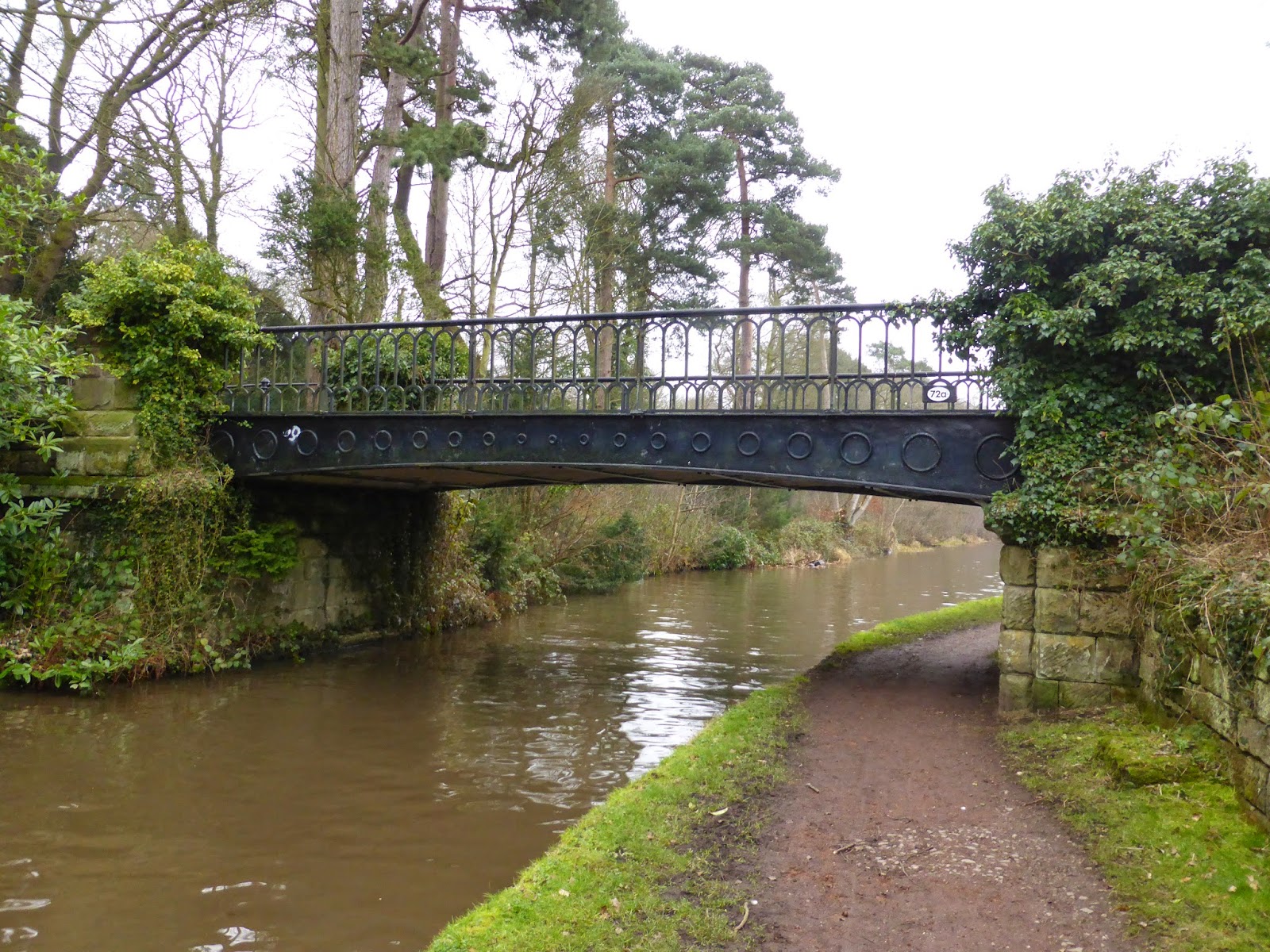 Our first lock of the day, the last on the Trent & Mersey, was Haywood lock with a rather nice looking tearoom alongside.  Buddy wasn’r really helping the guy wind the paddles, he was sniffing for dog biscuits.  He has learnt that pub landlords and boaters often have dog treats. 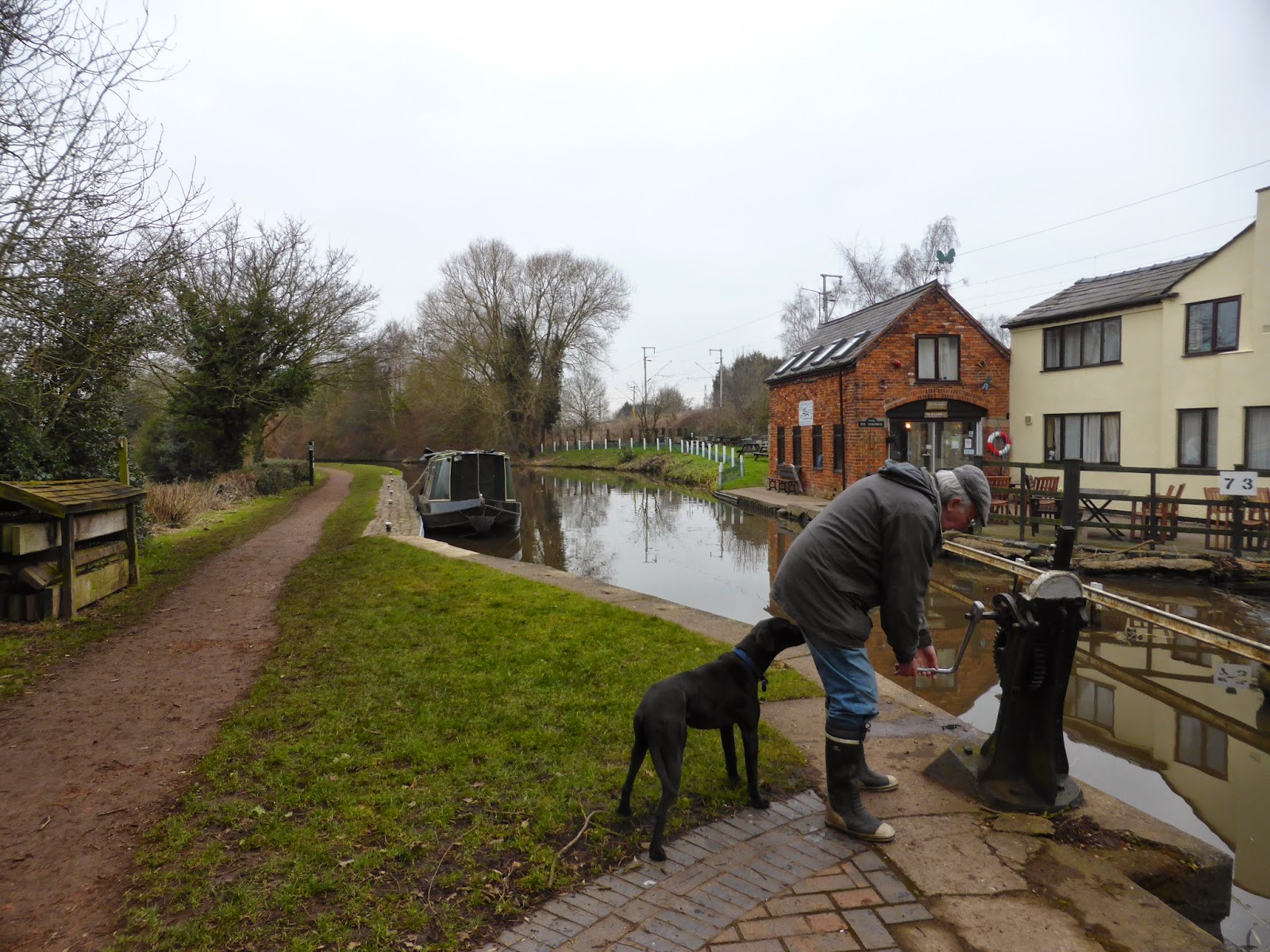 We joined the Staffordshire and Worcestershire canal at Great Haywood junction and disposed of our rubbish and recycling.  This is a base for a hire boat company so must be really busy in the season. 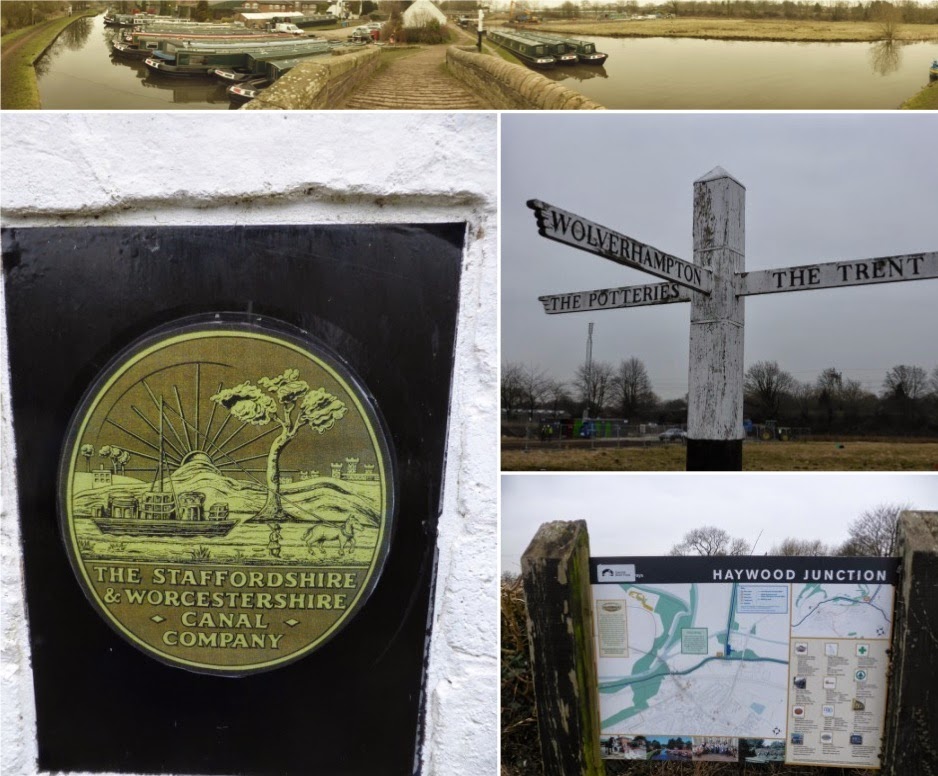 We have been on the Trent and Mersey canal since 12th January – a whole month.  As usual we noticed things that were peculiar to the new canal.  The bridge plaques are large and contain both the bridge number and its name. 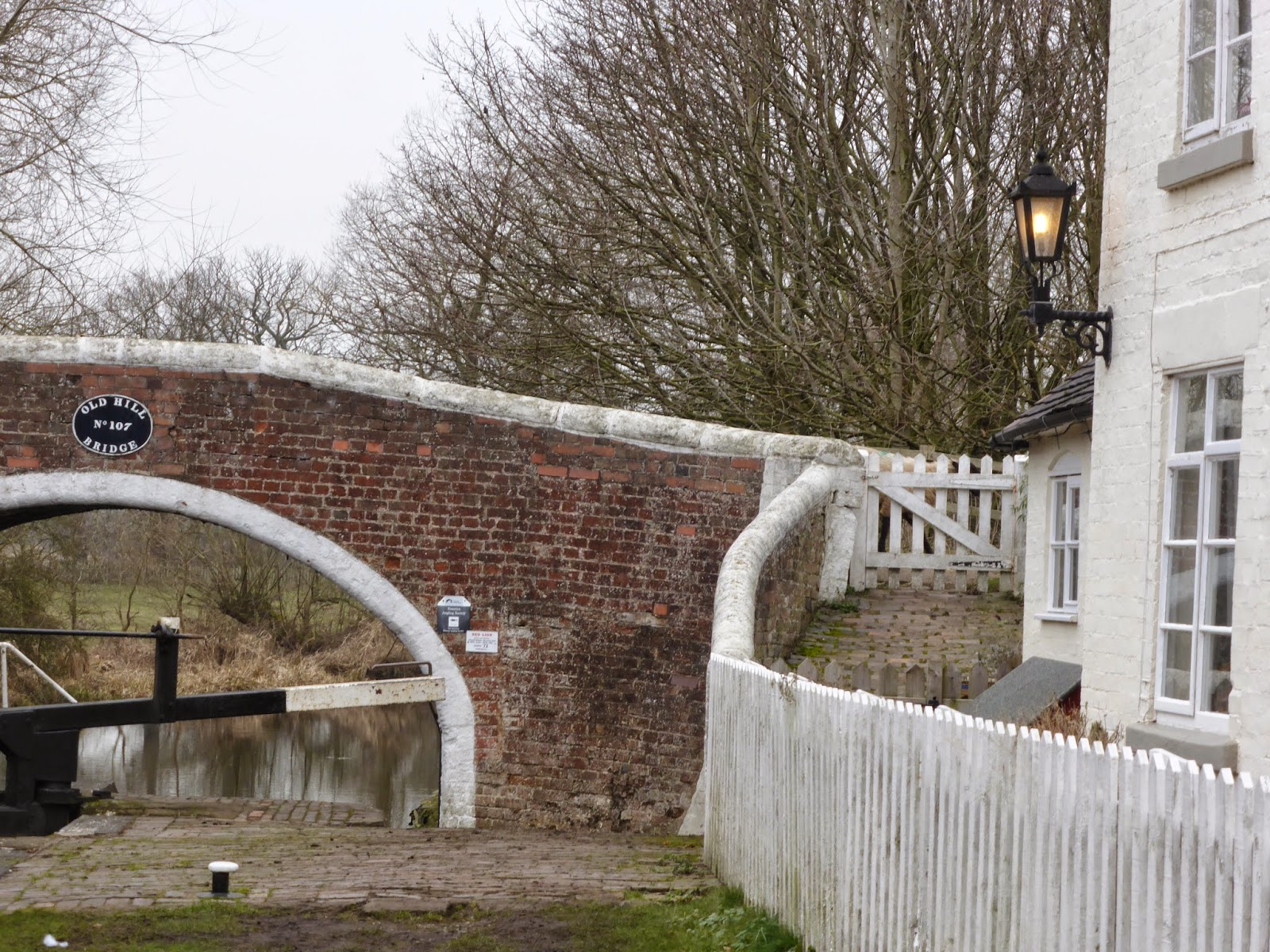 The aqueducts have plaques which is not usual and they state which waterway the aqueduct crosses. 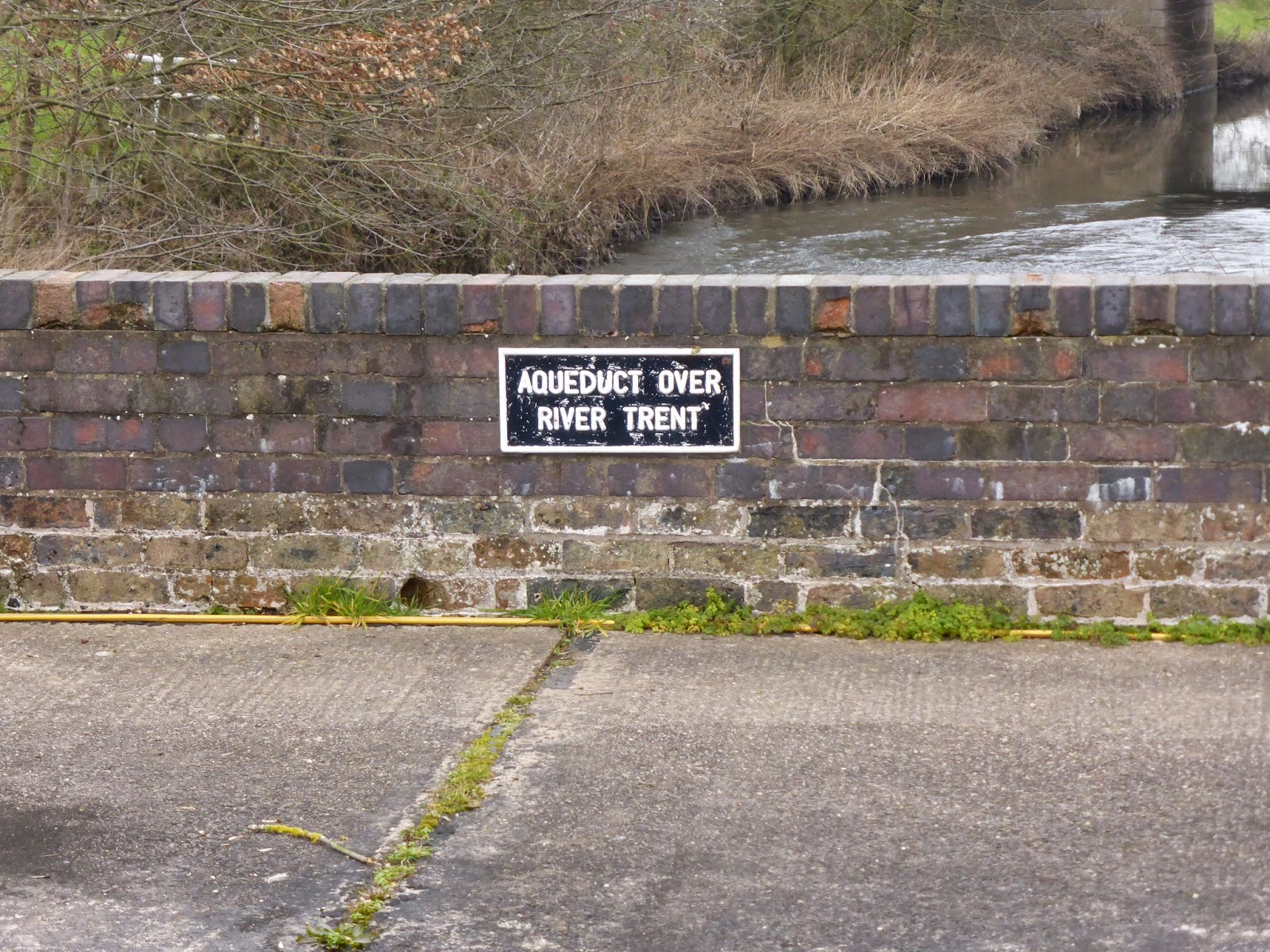 The bridges are as wide as those on broad beam canals but lower so have their own unique style as can be seen on the bridge as we turned south at Great Haywood junction. 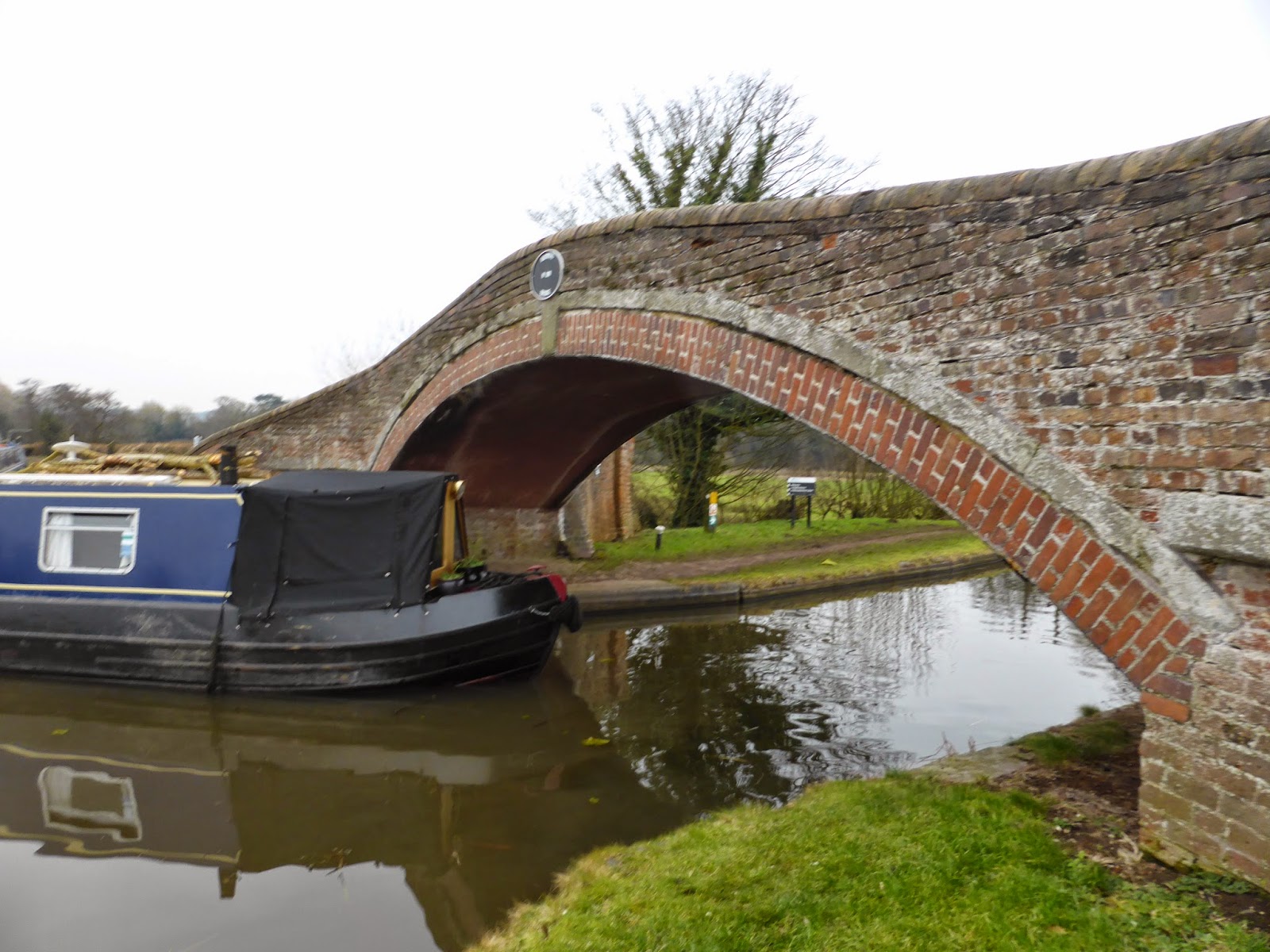 The mileposts are of a distinctive design too. 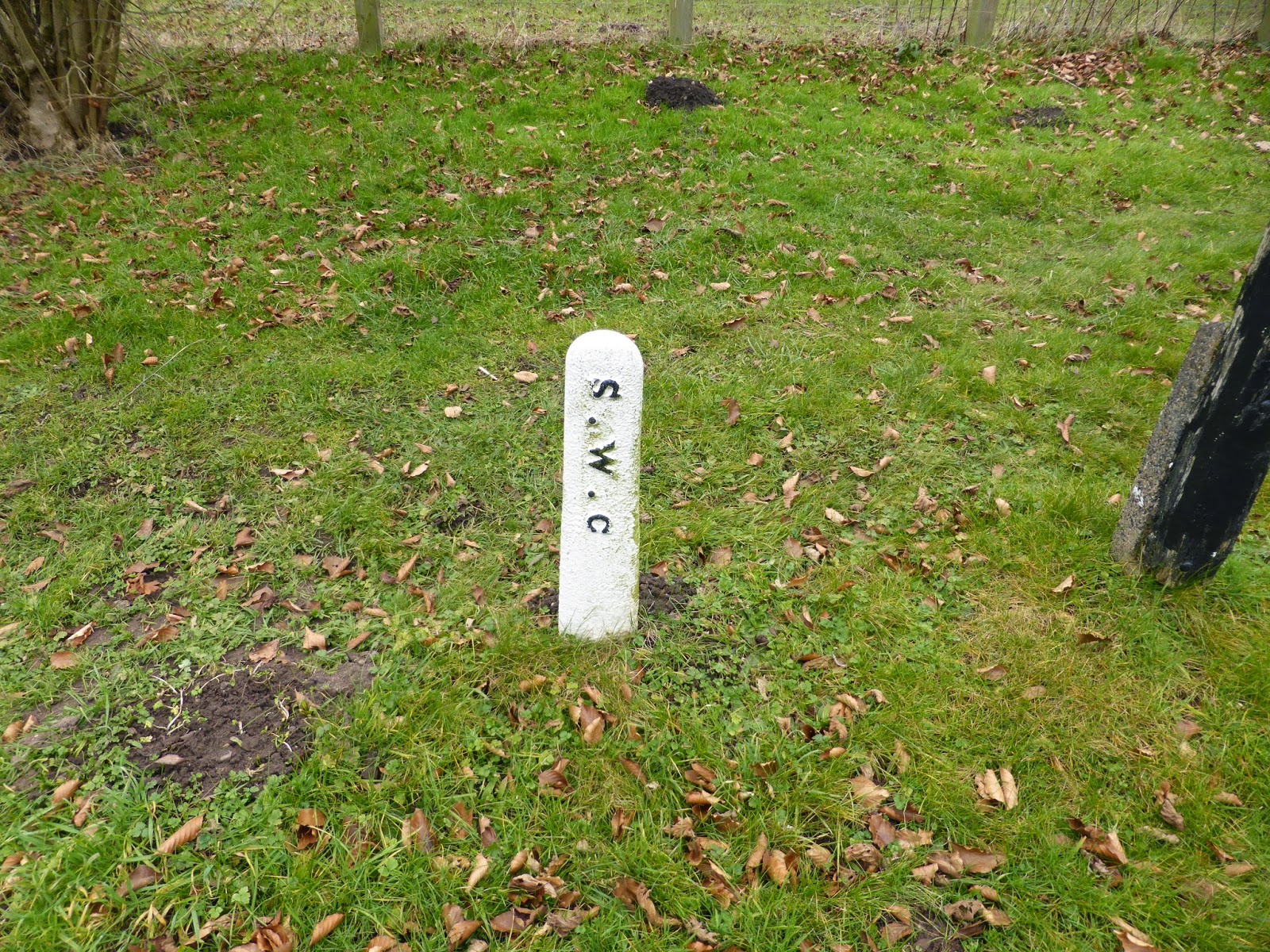 After a while we passed Tixall with some interesting buildings like this model farm; the
building contains the farm house, farm cottages and a brick built Dutch barn all in one development. 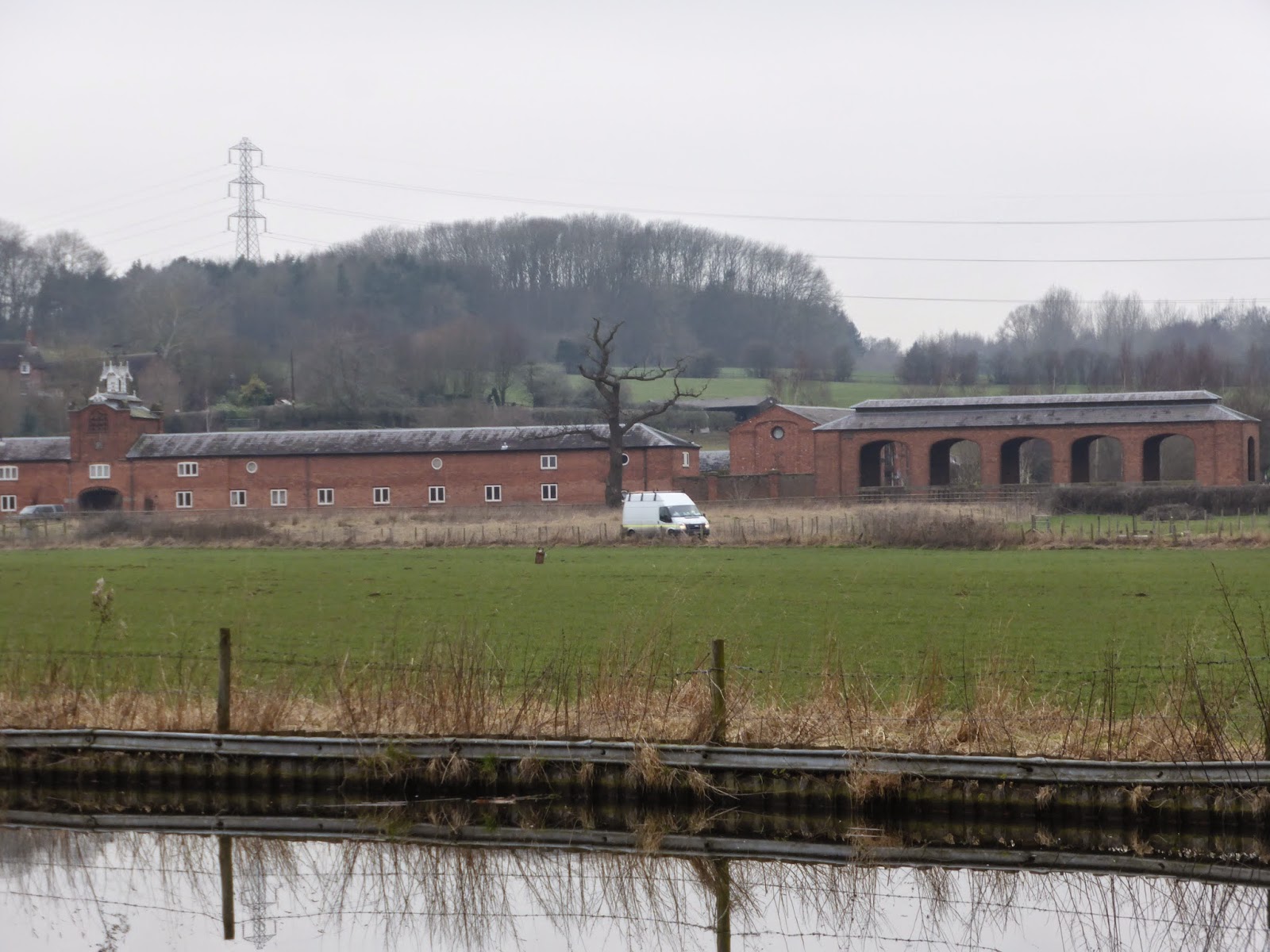 This is massive for a gatehouse – it was built 500 years ago and was the main gatehouse for Tixall Hall.  The hall was demolished at the beginning of the last century but must have been ostentatious based on the size of the gatehouse. 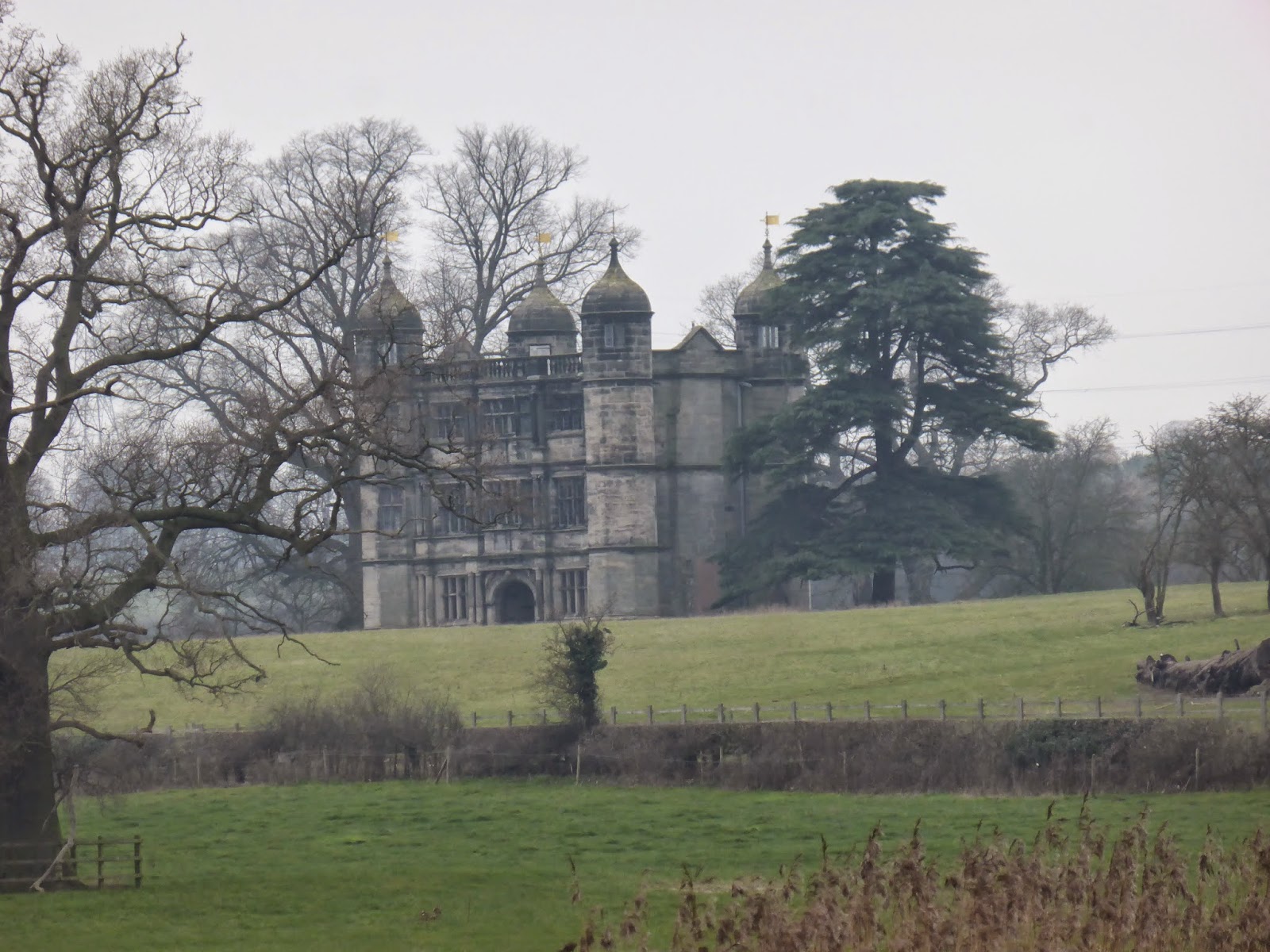 The canal at Tixall is really wide and funnily enough is called Tixall Wide; it feels like you’re on a large river like the Thames. 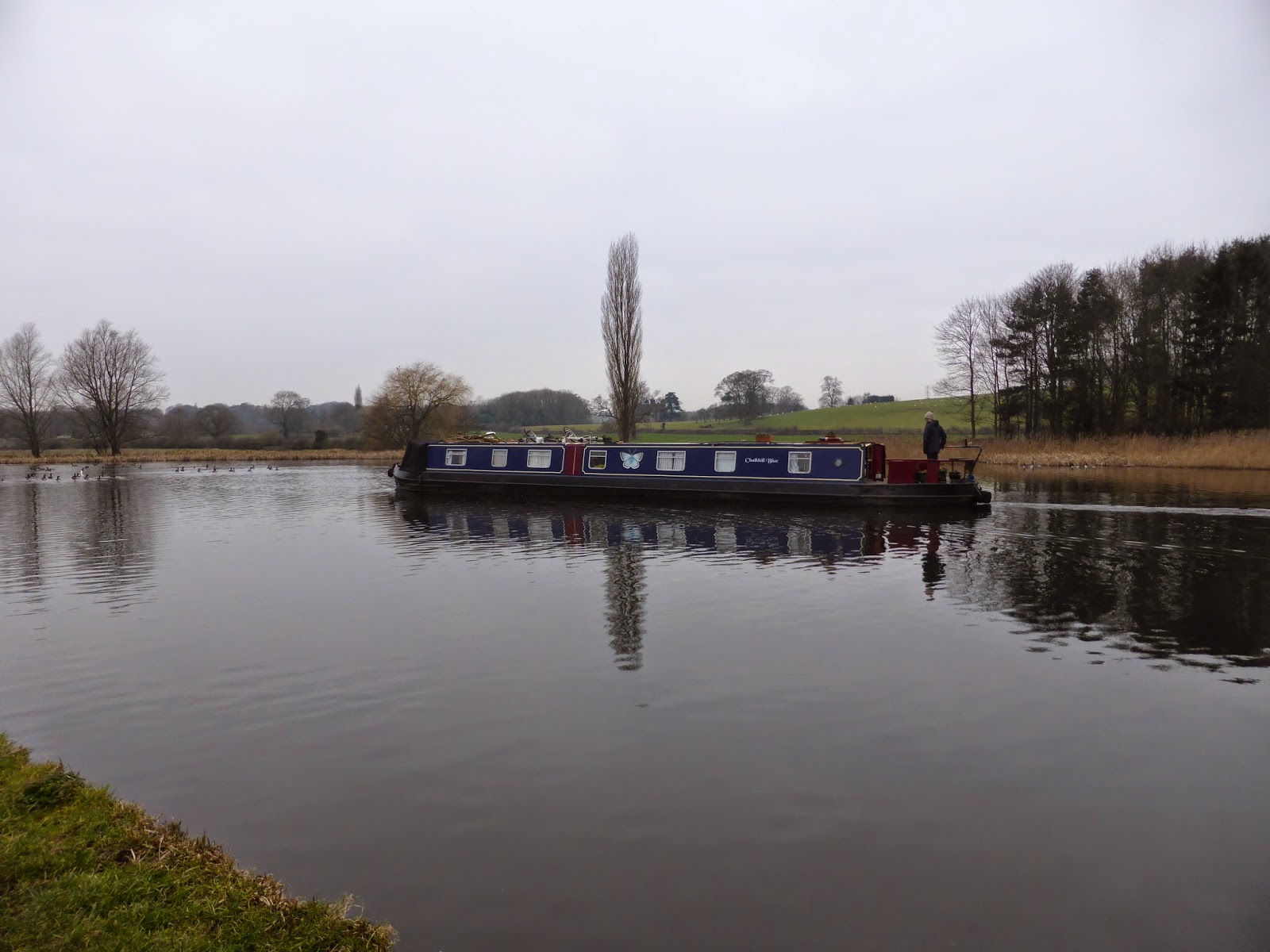 The first lock on the Stafs & Worcs is Tixall lock. Oh dear!  It has an empty stanking plank shed.  Cannock Chase is still running along on the left. 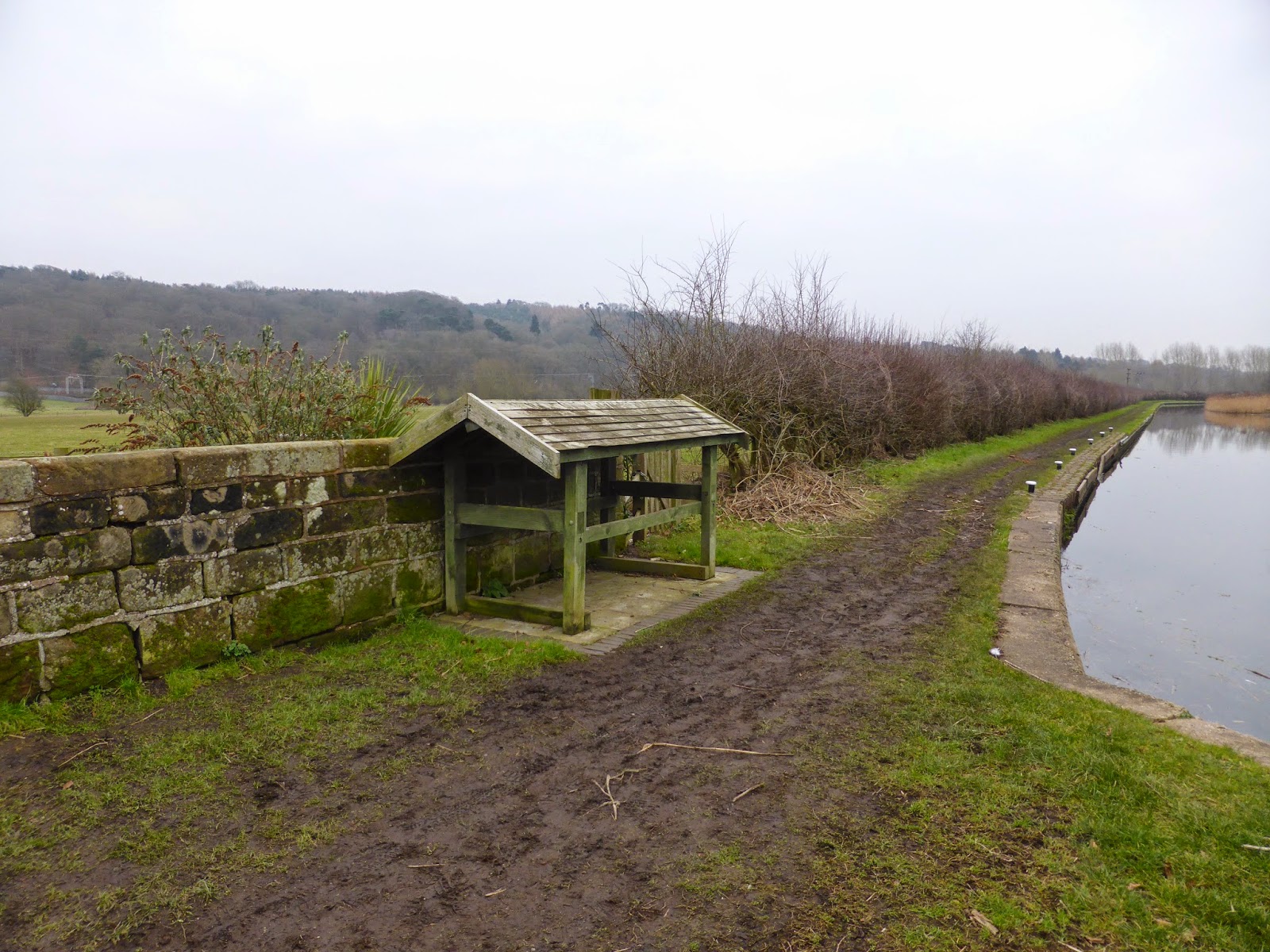 After Tixall, Karen steered for a while and we passed Stafford, well, the meadows to the east of the town. 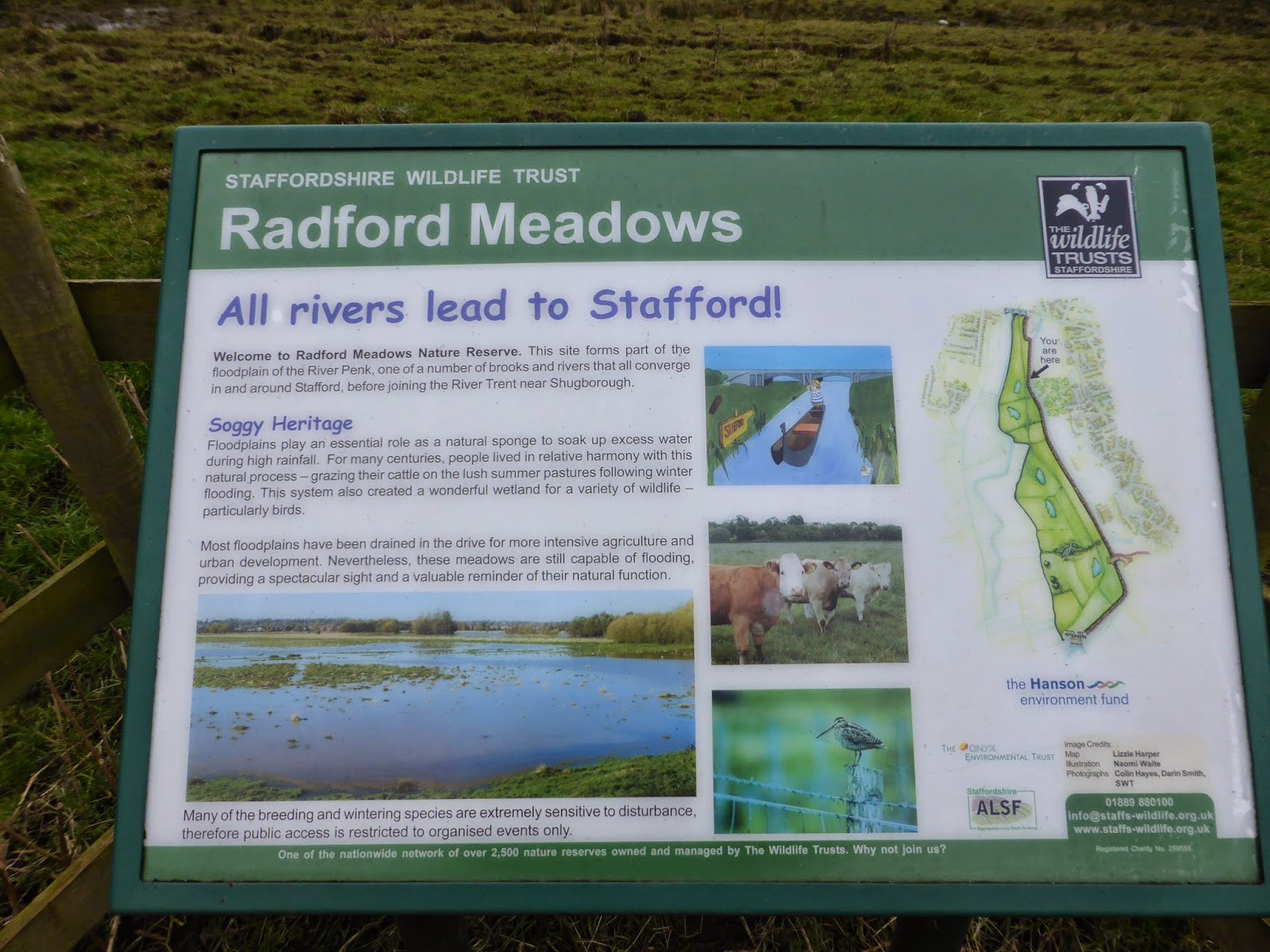 Buddy was a bit concerned that Karen was steering correctly. 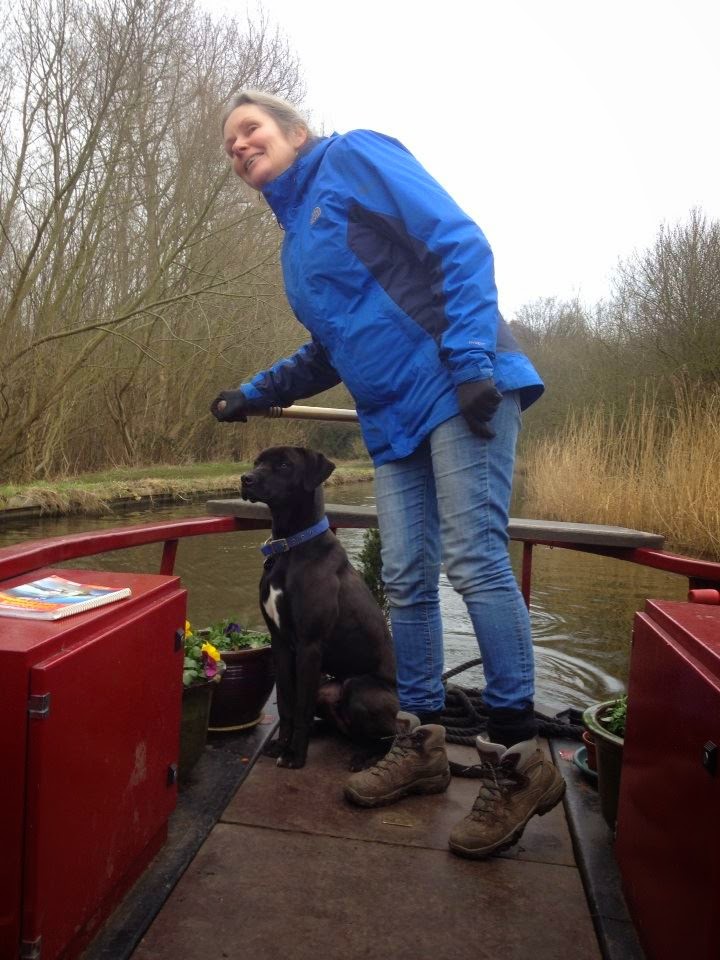 After Stafford we were soon out in the country again.  Here we are being attacked by Canada Geese. 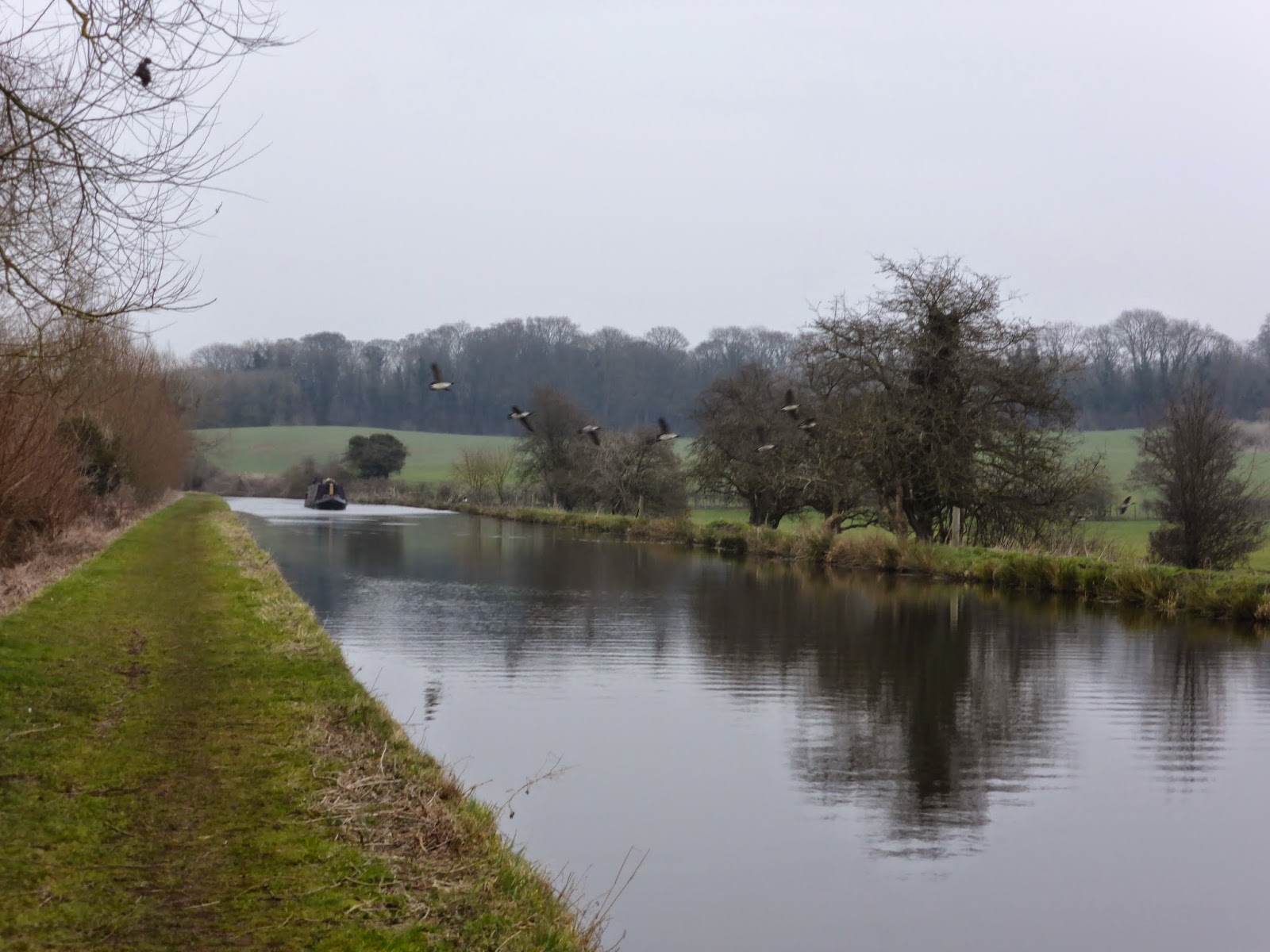 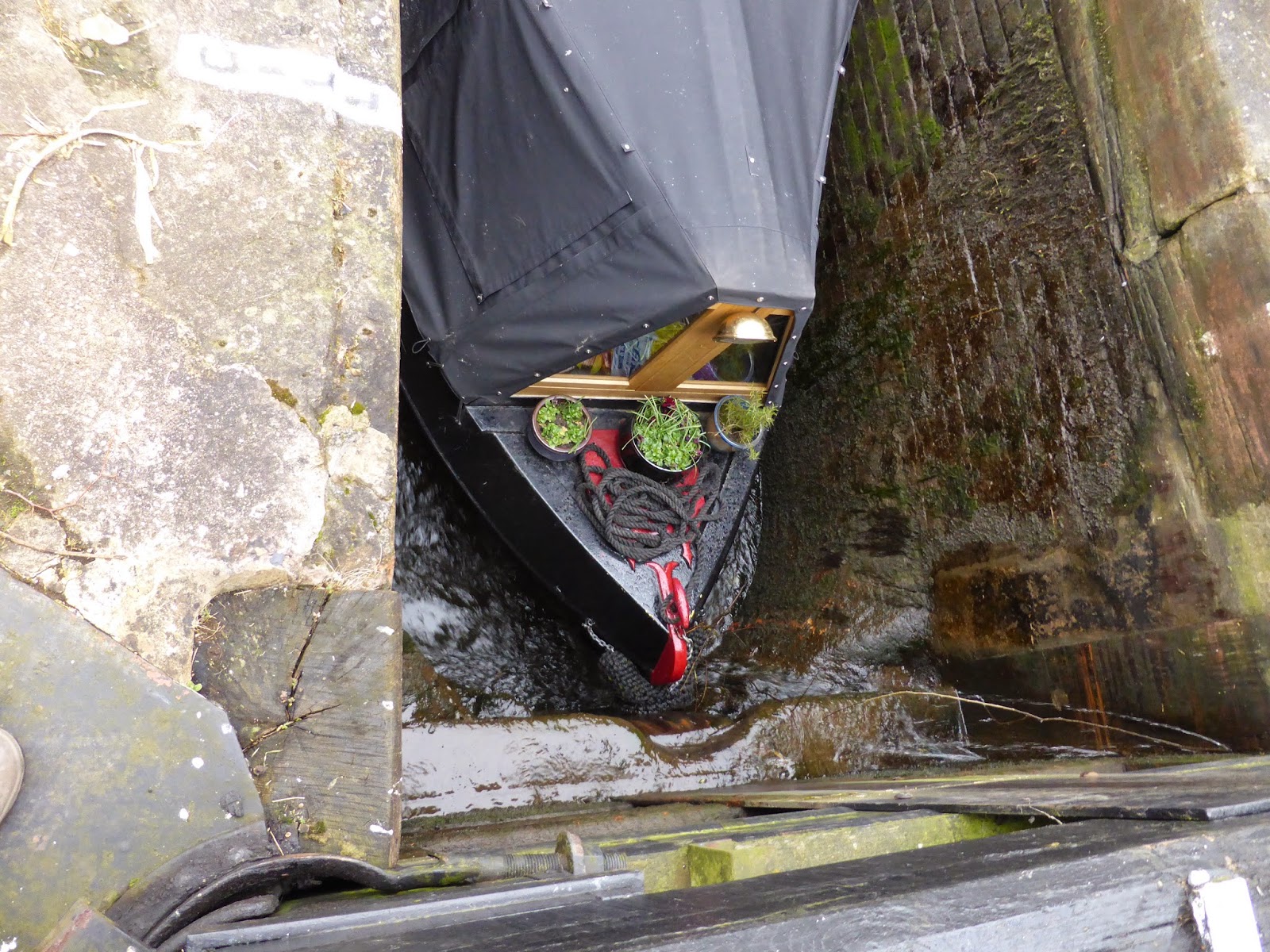 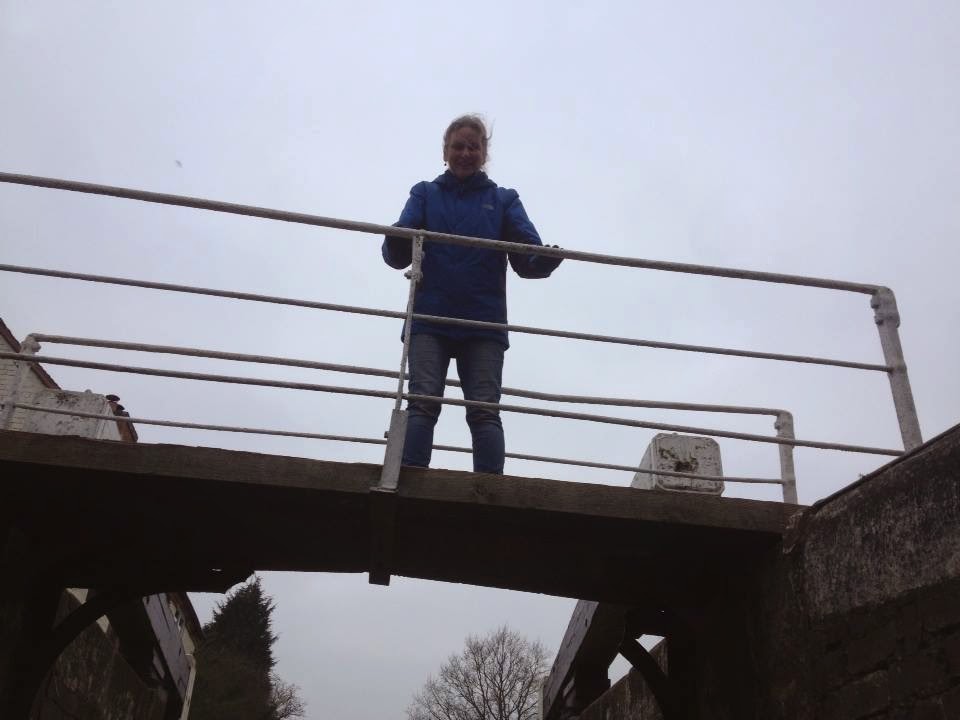 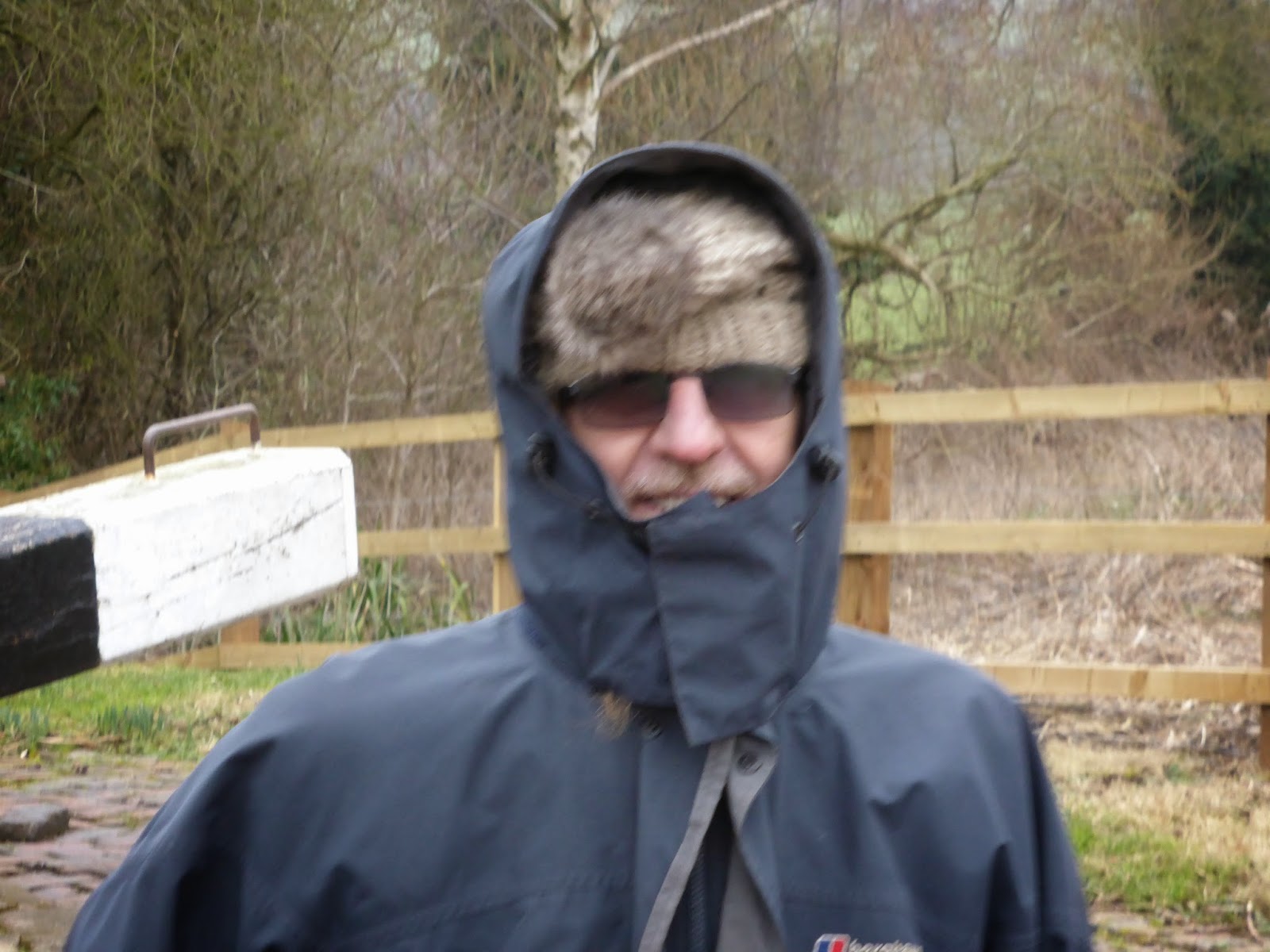 Karen thought I had her bobble hat on incorrectly – I suppose she’s right, the bobble should be on top.


We moored up after going through Shutt Hill lock which was rather close to a main road.  We are in a cutting in a woodland so cannot hear the M6 which is only ½ mile away. 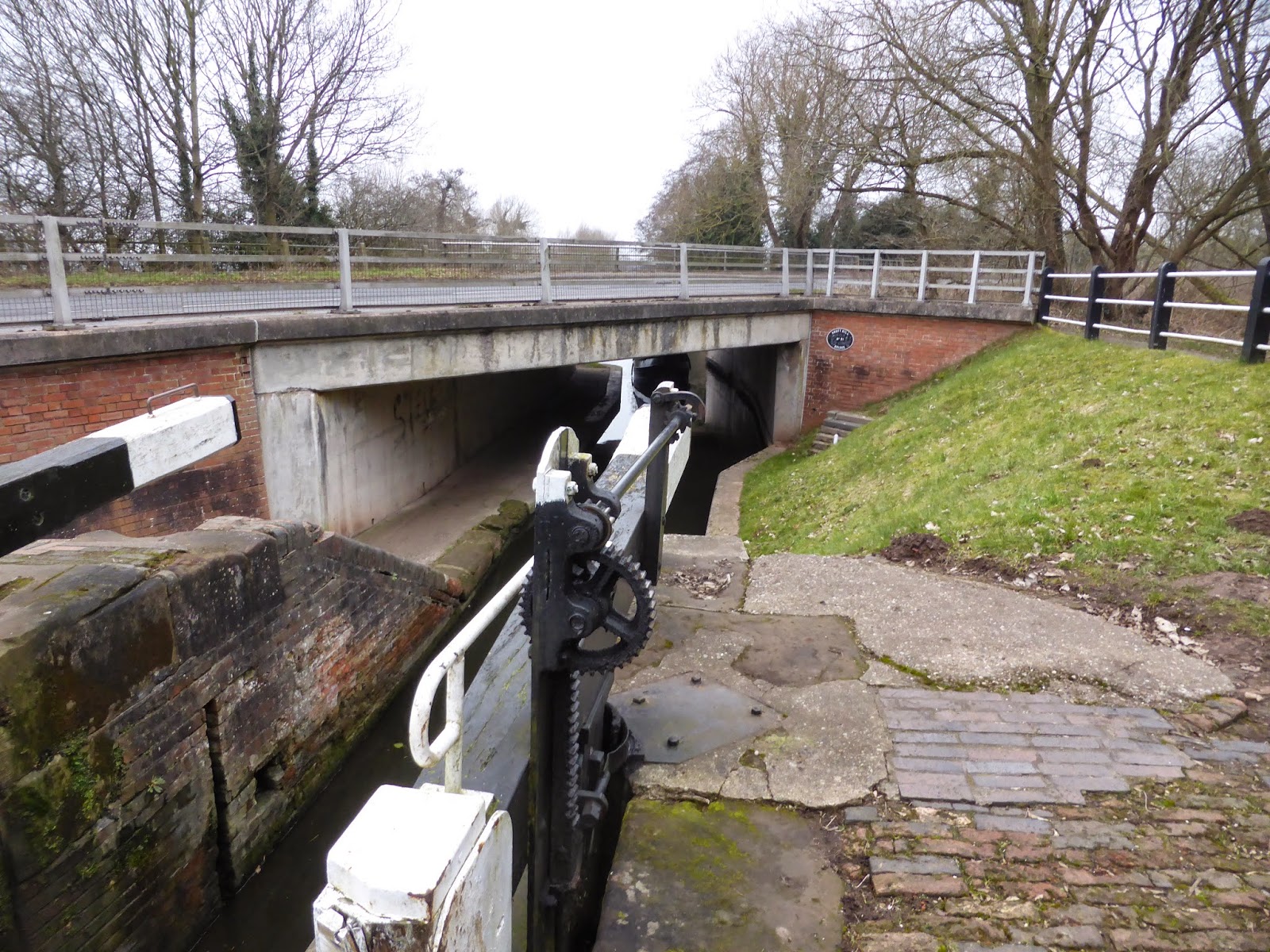 I need to get some of these logs cut up in the next few days as we are running out. 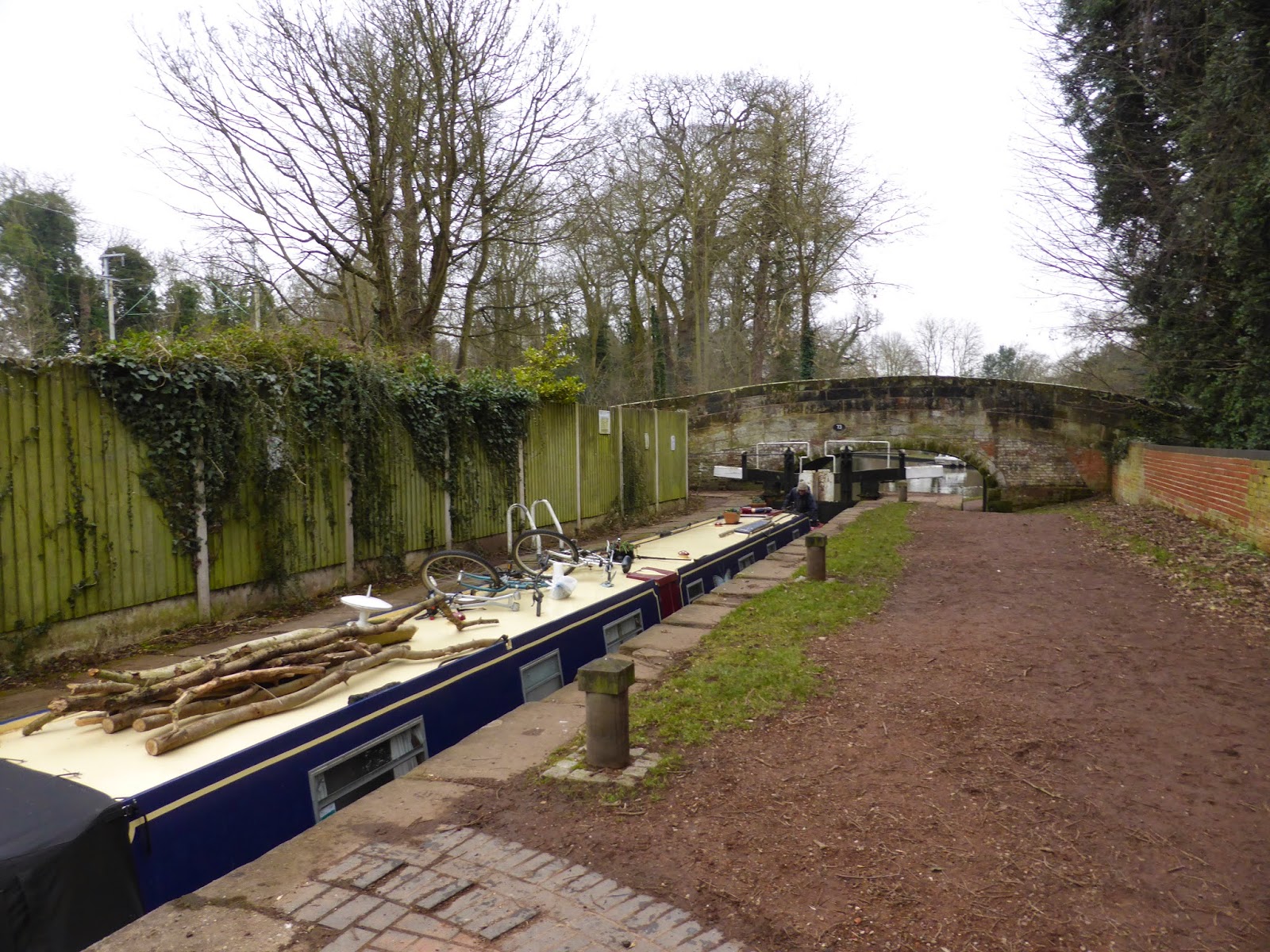