Dickens Heath (how to get an easy bike ride)


On Saturday, we passed the 2,000-mile mark since moving onboard full time on 3rd November 2014.  Not as much as most continuous cruisers would expect to do in that time but since Karen took her contract in February last year we have been bridge hopping around Warwickshire and only covered just over 500 miles in that time – still well in excess of the mileage demanded by our continuous cruiser licence.  We have also been through 1,800 locks since moving aboard so we have averaged just under one lock per mile.

In the morning, we cycled four miles back to Stoke Prior to get the car – a really easy bike ride as we had to go down 35 locks so we could freewheel most of the way!  We drove to Alvechurch and left the car at the station there and then cycled back to the boat.  I know it was only seven miles in all but Buddy ran most of the way and he spent most of the rest of the day crashed out on the deck whilst we were cruising.  The intention being to catch the train back to Alvechurch after we cruise to Lapworth on Sunday. 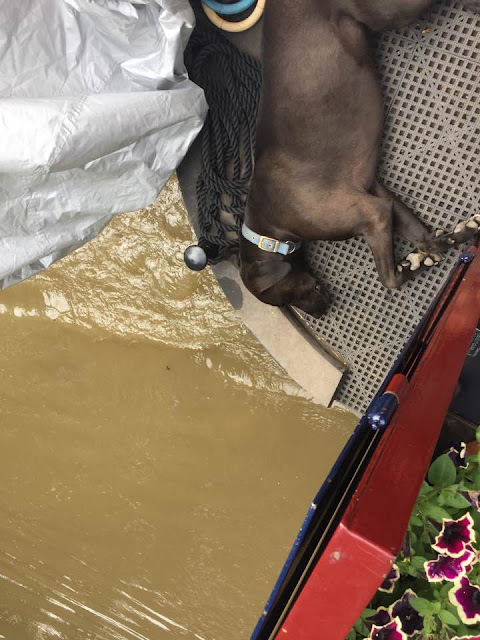 We saw plenty of butterflies on the wing including some of this summer’s fresh Brimstones.  These are the young of the butterflies that overwintered as adults.  Sophie, my eldest daughter, took a picture of one yesterday that clearly shows the leaf shape of the wings – they hibernate amongst ivy and the shape is a brilliant camouflage.

We set off for a cruise in the early afternoon and first we had to go up the top lock of the Tardebigge flight before reaching a 20 mile section without any locks.

Our friend Alison used to go to school above Wast Hills tunnel and remembers kids dropping stones down the air vents – she also remembers a fatal accident when a couple of workmen, working in the tunnel, were killed when part of the roof collapsed in the 1980s.

We were soon only five miles from the centre of Birmingham and the first signs appeared – graffiti and the red doors in bridges.  You may have read my comments on the red doors before but they were installed during the war as a means for the fire service to obtain water for putting out fires in the bombing raids.  With well over a hundred miles of canal in Birmingham there were plenty of bridges so a good access to water at most parts of the town.

At one point the retaining wall was collapsing so CRT had dropped bags of stones in the side of the canal to prevent further slippage.  We have never seen this approach taken before.

When we got to Kings Norton junction (just before Edgbaston and Bournville) we turned right onto the Stratford canal to start our journey south east again.

Just after the junction was the first lock, a guillotine lock; it is no longer used as it was a stop lock. Stop locks ensured boats stopped when transferring between canals in order to pay a toll.  Some stop locks also ensured that water didn’t flow from one company’s canal to another, so had a rise of a few inches.

We soon passed the first distinctive mile marker of the Stratford canal.  They show the distances to Kings Norton and to Stratford.  I know this one is two miles from the junction but the first mile marker seems to have been stolen.  These markers were installed during the restoration of the canal in the 1970s.  Some of the earlier mile posts are still in place – these are ones installed by the railway company when they bought the canal in the 1850s.

After another four miles, we reached Dickens Heath and moored up for the evening.