Lapworth (back on the Grand Union)


Having spent seven weeks at Lapworth in the winter it feels a bit like coming home now we are back here.  We will only stay a couple more days though as we want to get down the Oxford canal to Cropredy by the end of July.

As part of our morning walk, Buddy and I went to the nearest water point to fill up some old drink bottles.  We give fresh water to the plants that we will be eating so have to fill the bottles up regularly.  Our tomatoes are now producing ripe fruit so we shouldn’t have to buy any for our daily salads for the next few weeks hopefully.

The canal levels are fairly low at the moment and Buddy hasn’t found anywhere he can get down to drink the water.  This means he has had to resort to drinking tap water from his bowl.  There was a muddy old puddle by the water point and I had to keep him away from it as he was lapping it up.

As it was washing day and the sun was out I stayed put during the morning so the washing could dry outside.  I was surprised how many of the local dog walkers remembered us even though I couldn’t remember many names.

Even Buddy remembered John, who lives in an old lock cottage, and his three spaniels.  When we were living around here in February and March Buddy soon learnt to avoid the spaniels as they were grumpy and snappy.  When we met them again on Monday, Buddy seemed to remember and gave them a wide berth.

I took my lunch to the bench by the lock near where we are moored as there was quite a bit of boat movement and it’s a pleasant way to while away 20 minutes.

After lunch Buddy and I set off down the remaining six locks to join the Grand Union.  There were quite a few tourists out walking and so many wanted to chat that it took ages to get down the locks.  Still, it didn’t matter as we weren’t going far and it was good to have a break from the heat occasionally.

At one lock two separate people came up to ask the way to Birmingham via Kings Norton.  There are two main canals here with a major junction and if you don’t have a map it is easy to go wrong.  Both people had gone the wrong way up the Grand Union when they should have turned off onto the Stratford.  Both sets had moored at a pub and soon realised they were on the wrong canal when chatting to the barmaid.  They then walked into the village and found the canal where they should have been and I explained how they could turn around and get back on track.  The towpath around here has recently been gravelled, horrible stuff, but great for drawing maps on with a windlass!

As the six locks were close together I did quite a bit of walking back and forth between the locks to get them set and close them up.  Buddy soon got fed up with this and just stayed at whichever lock had the boat in.

Karen and I both think that this is one of the better parts of the system as it has locks, junctions, walks, pleasant moorings, good boater facilities and also tends to be quiet.

Karen had a great idea at the weekend and thinks we should do the Hatton flight (21 locks) on Thursday evening.  She reckons she can get home from work early at about six so we should have just enough time to get the flight done.  It’s always fun cruising in the evenings especially in the summer.  So, this week Buddy and I will slowly make our way to the top of the Hatton flight ready for Thursday.

I was conscious that I hadn’t included a picture of all of us celebrating Matthew’s graduation in Prague at the weekend but Sophie found one so here it is.

Sophie also sent me this one of her and Yanos and some silly man in the background, 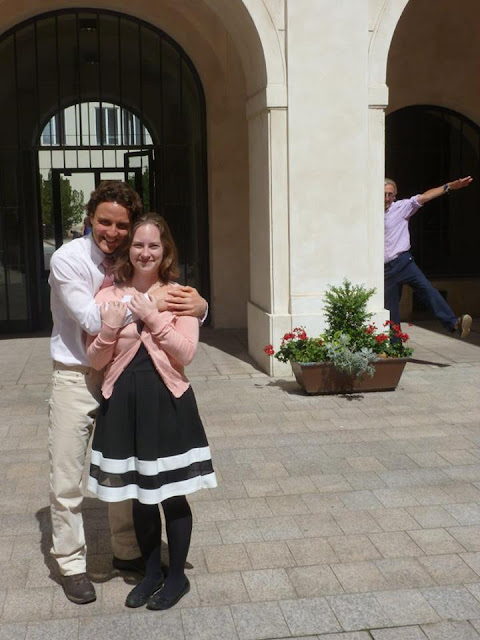