Mike and Lesley, who live in Cropredy, got in touch as they wanted to help me up the Stockton flight.  They knew I was going up on Wednesday and they were free from lunchtime.  Unfortunately I had arranged with Mark, on fuel boat Callisto, to meet him for diesel at 10.00 after the first two locks.  It was really kind of them to offer but there’s bound to be other times when they can come over and do some locking with us.

Wednesday had dawned really misty and it looked like being grey all day.  I set off at nine as I had a mile and two locks to do before meeting Mark.

As with Tuesday the locks were set against me and there was no one to share them with either.

After the second lock I turned into Kayes arm which is a waterway that we have never been down before.  When Mark is not doing his fuel deliveries on his boat he lives on a butty by this arm and moors his fuel boat on the arm.

After filling up with diesel I went up the eight locks of the Stockton flight.  The locks are quite close together so it’s easy to get into a routine of finishing one lock whilst setting the next.  I met one boat on his way down so that helped as we could leave locks set and gates open for each other.  In the summer it sometimes feels like you meet boats at every lock as it’s so busy.

We cruised on for another mile or so to one of our favourites: Tomlow.  As well  as being quiet, Karen can park right next to the boat as a tiny lane runs by the canal here.

In the afternoon Buddy and I walked down to Napton reservoir.  When Karen came home we popped to the Boat inn for our cheeky Wednesday pint - never has been, and still not, a pub we would recommend.

During the day I received the email below from CRT.  We had been moored at Cape locks in Warwick over the weekend - just as well we left when we did otherwise we would have been stuck there until practically Christmas. 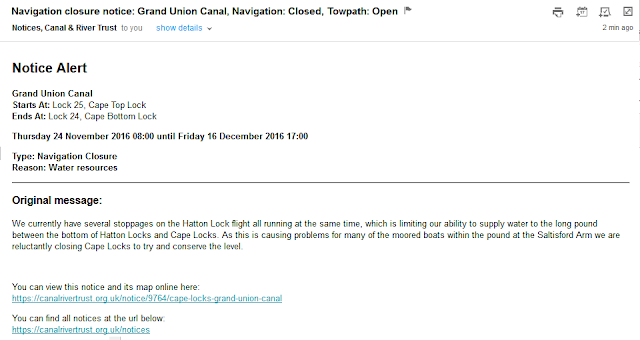 The message reads: "We currently have several stoppages on the Hatton Lock flight all running at the same time, which is limiting our ability to supply water to the long pound between the bottom of Hatton Locks and Cape Locks. As this is causing problems for many of the moored boats within the pound at the Saltisford Arm we are reluctantly closing Cape Locks to try and conserve the level."