Considering Karen has been working in Warwick for over a year and we have been continuously cruising the general area all that time, it’s surprising that she has never walked around the town.  Mind you, I have only been in there a handful of times and, until Wednesday when Buddy and I had a good look around, they were all for errands like paying cheques in at a bank.

As we are only moored a mile away from the town centre we decided to spend Saturday in town.  Not only did we want to have a look around there was some domestic things that needed doing like getting shoes re-heeled and Karen getting a haircut.

Just before we left, a couple of boats came out of the lock where we were moored.  Karen and I were leaning out of the side hatch enjoying the sunshine before the black clouds came.  The first boat was being steered by Steven Cross so we had a brief chat as he passed us.  He had been on a boaters’ social group during the week asking about moorings at Warwick.  He got the usual split responses between those, like us, who prefer to moor out of town in the peace and quiet and sun.    The other responders recommended mooring in the centre as its close to town which is rather gloomy because of tall trees and flats.  I was amazed that some people recommended getting a bus for the less than ½ mile journey into town from the moorings in the centre.

Rain was forecast for most of the day so we wore our full wet weather gear, unlike Friday night when we got soaked walking in to town for a drink and a meal.  We started off by visiting the hidden gardens and as soon as we reached the first one the rain started getting heavy so, unlike the other tourists, we were glad we were dressed appropriately.

As it was we didn’t get to go into any of the other gardens.  The first had an £8.50 entrance fee which, considering the weather, wasn’t really worth it – it would have been better on a pleasant day when more time could be spent there.  Shame really as it has been in cultivation for over 500 years and apparently has some fascinating features like a pineapple pit and a 2,000-year-old nilometer shipped over from Egypt.

Nilometers were used to measure the water level of the River Nile during the flood season and hence provide a means to calculate the amount of tax to be levied on crop growers.  There was an optimum flood height that would deposit the best alluvial soil on the fields and hence that level would bring in the most crops and consequently the highest taxes.

Another garden was down by the river and castle and that looked beautiful but didn’t allow dogs in.  We tried to convince them that as they had no other visitors and it was raining that an exception could be made for Buddy but to no avail.

We went into the Rose and Crown to get a drink and a sandwich before Karen went off for her haircut.  I ended up having dressed crab – I can never resist that – and Karen had a proper steak sandwich which was just to the medium side of rare – just the way she likes good steak.

After Karen’s trip to the hairdressers we went down to the river Avon - see picture at the top.  It’s a shame it’s not navigable for narrowboats but the navigation stops soon after leaving Stratford on Avon.  As I mentioned the other day, there are still plans to open it up to navigation and provide a link onto the Grand Union between Warwick and Leamington Spa; it would be great to cruise past the castle.  The original part of the castle was built for William the Conqueror in 1068, nearly 1,000 years ago!

The pleasure boat yard was closed because of the weather otherwise we would have gone out in one of their discrete pedalos (!).

We had a wander around a few of the quaint streets and then, as the rain got heavier, took refuge in the Old Coffee House.

We were tickled by this card hanging in the window of a shop that made and sold hand made cards: 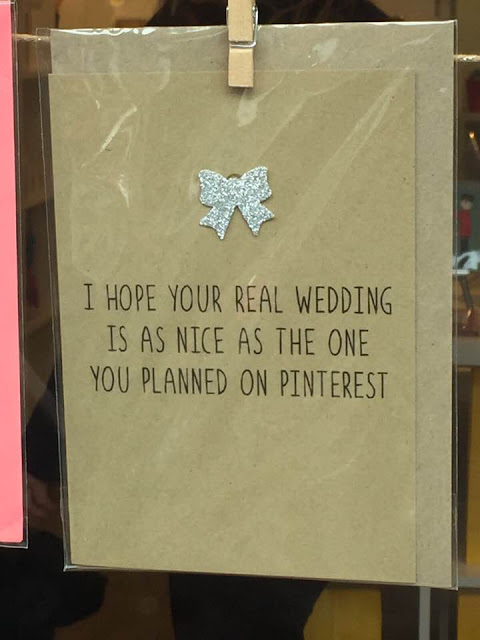 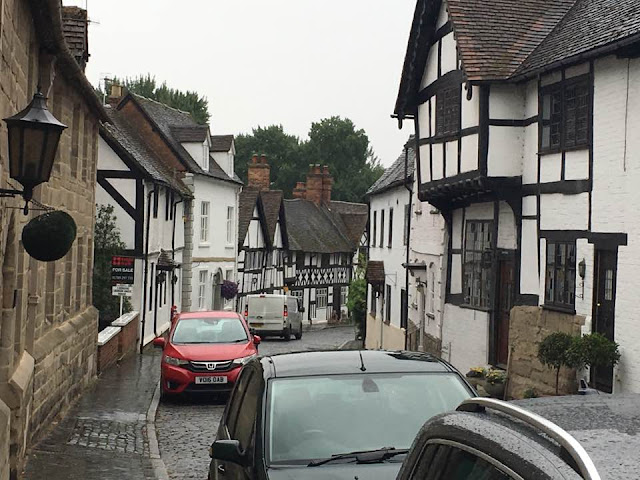 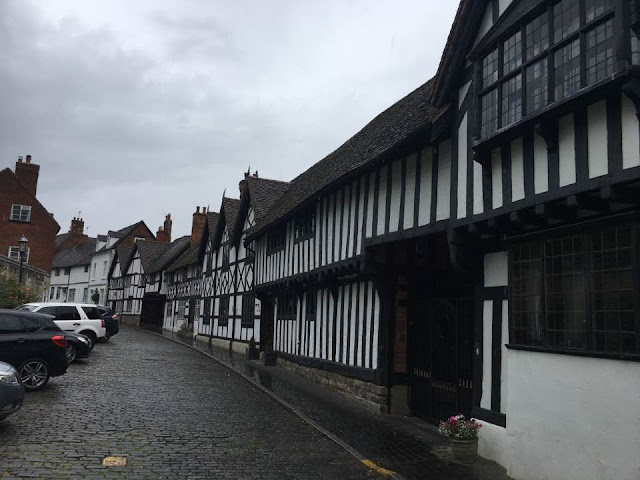 We popped into Sainsbury’s on the way home and Karen cooked a delicious salmon en croute for dinner.
Email ThisBlogThis!Share to TwitterShare to FacebookShare to Pinterest