Bailly (had to stop for the crémant)

Remember I said that the boat was listing when we got back after filling our jerry cans with diesel on Monday?  Well, the response we got from VNF was that they had to drop the pound as work was going on but it wouldn’t drop any further, so we lengthened our lines and pushed the boat out into deeper water.  By five on Tuesday morning we realised that the VNF guy wasn’t quite right as we were at such an angle that I had to get dressed and go outside and sort it out

Fortunately, the boat was only caught at the front and it was relatively easy to manoeuvre the back out with a barge pole and let it drift out further into the stream.  It did mean that Karen didn’t have to get up to help though but it also meant that we were now too far away from the bank to get to shore with a gangplank but at least we were level.  If the worst came to the worst, we would just cast off leaving the lines and the pins in the bank and come back and get them when we could get to the side.

As it was, by the time we came to leave at 9.30am the level had come back up enough for us to pull ourselves further in and get a gangplank across so that we could get Buddy off and remove the pins and lines.  It wasn’t long before we were heading south out of Auxerre continuing up the Yonne valley with its rolling hills of vineyards.

The first few dozen kilometres of the Canal du Nivernais are really the canalised River Yonne therefore in many parts it is still wide with weirs alongside each lock.

An éclusier came up as we were casting off as he wanted to check we were still going and also how far we planned to go for the day.  He was on a motorbike but most éclusiers use VNF vans to get between the locks.

As can be seen by today’s pictures the clouds had arrived and we had the odd spell of drizzle too.  It wasn’t until the middle of the afternoon before the clouds started rolling away and we were back to nice warm sun.


The lock gates and paddles are manually operated on this canal so the éclusier had asked if we were OK with only one gate being opened at each end.  This would mean he could stay on one side of the lock and cut his work and walking distance by more than half.

The bollards at most of the day’s locks were positioned a long way back from the side which made it rather difficult to get the line loop attached.


Moorings are very few and far between and when they are provided, they are only built for one or two boats.  They were proud of the new moorings at Champs-sur-Yonne built to encourage visitors to the village, but they weren’t really big enough to encourage a large influx!

After going through the lock at Champs-sur-Yonne it was time to stop for the mandatory éclusier lunch hour.  We moored on an island which meant Buddy could roam free whilst we had our lunch.

The canal is separated from the river by a stone wall through the town and in some places it was hard to see the retaining wall.


Each lock has a lock cottage, and many are still occupied by the éclusiers.  The éclusier on the motorbike saw us through the first lock and a different guy took over for the next four, driving his van along the roadway that runs along the river bank.

I called the éclusier over and pointed out that the bottom paddles were still open.  He apologised and closed them and we were soon on our way again.  Karen told me that when we first turned up at the lock he had told her that he was a novice 😊


There was a good length of mooring at Bailly because they are right next to the cooperative that produces crémant de Bourgogne and they obviously want to encourage visitors.  Unfortunately, the water was disconnected, and we noticed the electricity points were out of order too.  Looking at the Dutch Barge Association mooring guide it seems they have been out of action since 2016.  Our plan was to spend the night there and visit the caves of Bailly Lapierre on Wednesday.

A British broadbeam turned up later in the afternoon and moored up in front of us.  We introduced ourselves to Paul & Sue on Flubs; they had overwintered in Auxerre and had just set out for their summer cruising.  Like us they were going to stay a night or two here and also visit the caves.

In the evening we paid the invoice for the trucking company that brought us over.  This was the last item we had to pay for, and we were pleasantly surprised to see, that compared with our original budget that we set over a year ago, all the costs associated with modifying the boat, buying items needed for cruising in France, craning and shipping we were only £263 over budget!

Karen set off for a run along the towpath on Wednesday morning, but had a problem as we were moored on the opposite side to the towpath. On a canal she would run down to the next road bridge and cross over to the towpath.  As we were on a canalised river in the countryside the bridges are many miles apart so we took the boat over to the other side hoping I could moor there temporarily until she returned.  It was far too shallow to moor but I could just get the nose in, and she and Buddy jumped off and I brought the boat back across.  Of course, we had to repeat the operation when they returned.

While she was away two plastic hire boats with French crew turned up and all of a sudden, the moorings were getting full.  After Karen’s return, we spent some time with Paul & Sue and then, after lunch, went to visit the caves in the hillside above us.

The caves were originally created by the quarrying of limestone which was then shipped down the river Yonne, into the Seine and thence into Paris where it was used as building stone.  Nowadays the seven acres of tunnels are used to store several millions of bottles of crémant de Bourgogne at a constant temperature for the one to two years it needs after bottling.

Although tours around the caves are run at least once a day all year around apart from January we happened to visit at the only other time of year when tours aren’t run: the last week of March and the first week of April ☹ 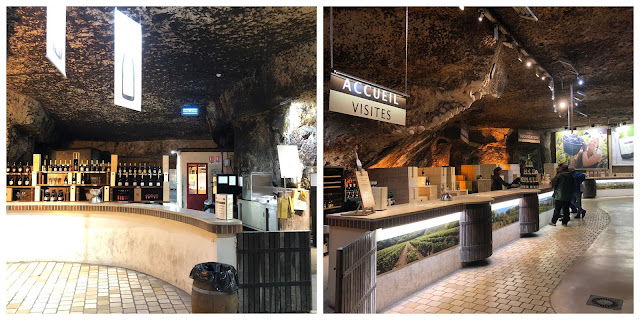 The shop was still open however, so we bought a crémant and also a bottle of Irancy, a red Burgundy from the next village so that I could continue to ensure I only drink local wines when in France.

We will move off again on Thursday and head for Cravant.

Since the last blog entry, we have cruised 11 km up six locks,