Kidsgrove (started our long trek back to Leamington)


Tuesday & Wednesday were busy ‘work’ days.  Guys from the boat yard in and out all day, fixing items on the snagging list and doing some extras jobs we had come up with.  It got a bit crowded on the boat at times as I had my own job list to complete too.  By Thursday afternoon all was finished and Buddy and I got ready to leave.  First we filled up with water which meant we had to move away from the old boat to get near the water point.

The picture below is the galley and the door on the angle at the end of the worktop run on the left was rather problematical.  When the kitchen was built, the angled bit had been left open with a couple of shelves to be used for display purposes.  This was rather impractical for us as we need as much storage space as possible.  It’s OK if you use a boat for the odd holiday but living aboard we find all space is precious especially considering we had downsized by 20%.  Karen’s plan was to store tins etc. in the space as they can be piled up in a cupboard but if there wasn’t a door then they would fall off as soon as we started moving around on the water, in a lock for example.

When she left for work on Monday she was adamant that a door had to be fitted no matter what. The carpenter was really reluctant to add a door because he was concerned about hinges pulling out.  Karen’s response was to say she would be happy if it was hinged on the floor and opened like a dishwasher door.

Anyway, to cut the story short, Tony ended up fitting a door in the way she first wanted so all was good in the end.

Back to Thursday, and Buddy and I set off to moor by the Broken Cross pub where it would be easy for Karen to park the car when she got home from work.  She managed to leave early but the M6 was really slow so she didn’t get back until nearly 7.45.  We popped into the pub for a quick drink and thought it would be a good idea to eat there rather than worrying about it on the boat.  The barman got us some menus and said we had to order by 8; we put our order in and then he came back and said the chef had gone home!  Anyway, we were happy to go home ourselves and cook a simple pasta and sauce.

On Friday morning Dave (Karen’s cousin) and Barbara came over to see the boat.  Some of the design features were based on their new boat that they had had built a couple of years ago so it was good to show them around.  In the afternoon we set off on the start of our long journey back to Leamington.  We wanted to get as far as we could over the weekend so we cruised until it was quite dark.

At Middlewich we went through our first lock on the new boat with a couple that we have seen a few times previously.  They noticed that we had changed our boat and were really pleased that they were in the lock with us on her maiden voyage.  The girl told us she was in floods of tears when they changed their boat a few years ago when she realised the ‘lasts’ they were doing, like the last lock, the last fill of water etc.

The next lock was a single width lock which they all will be now until we get back onto the Grand Union near Leamington.

When I was sorting out the pictures that we took during the day I realised how daft my beanie hat looks – it is far too large and makes me look like I have a head extension.

By the time we moored up outside the Cheshire Cheese in Wheelock on Friday evening we had covered 11 miles and been through nine locks.  The Cheese is one of Dave and Barbara’s favourite pubs so we popped in for a quick one.  The pub is a real drinkers’ pub and was packed which is always good to see.

Our aim for Saturday was to get up the Cheshire Flight – 26 locks that will see us leave Cheshire and into Staffordshire.  It is also known as Heartbreak Hill as there are so many locks in a seven mile stretch.

It was great to take the new boat out for a good cruise and see how she behaved.  We are so pleased with her – so much easier to handle as well as being a wonderful home inside. In addition to being a shorter boat the engine is 50% more powerful which makes it much easier to manoeuvre in tricky situations – I can’t believe we went up so many locks without knocking the sides.  No doubt the scratches will come in time but it’s good to see her looking so bright and shiny still.

The skies in the photos look a bit grey but it was actually quite sunny a lot of the time on Saturday - good for the solar panels.

Most of the locks on the Cheshire Flight were originally doubled up to help the freight traffic move more quickly.  Some of the second locks have fallen into disrepair and are not being maintained but most are still in use.

Having the locks in pairs means that I have to be aware which lock to head for.  Over the years we have developed a series of arm signals so Karen can let me know which one to use and whether another boat is on its way down. 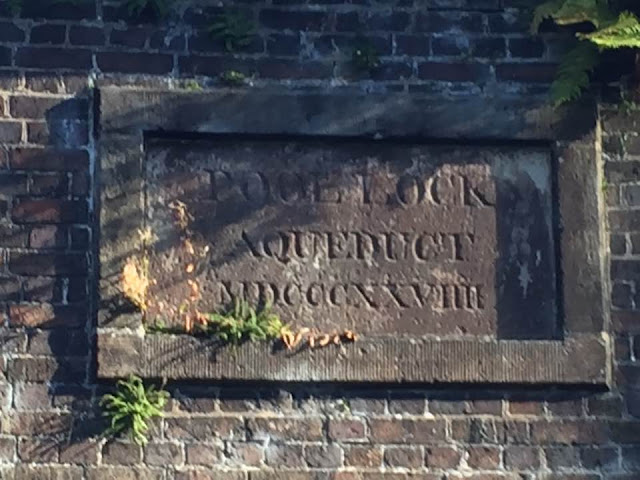 It’s funny that every time we have been through the Cheshire flight together we have always gone up it apart from when I brought the old boat up here when I went down the locks – Karen has still to go down the flight.

By the time we moored up it was about five o’clock and we were feeling happy but shattered so spent the evening in.  We both felt it was really refreshing to have a good hard day’s cruise together as it does seem a while since we have done it.