When I opened the side hatches on Friday morning I was greeted by a family of swans. 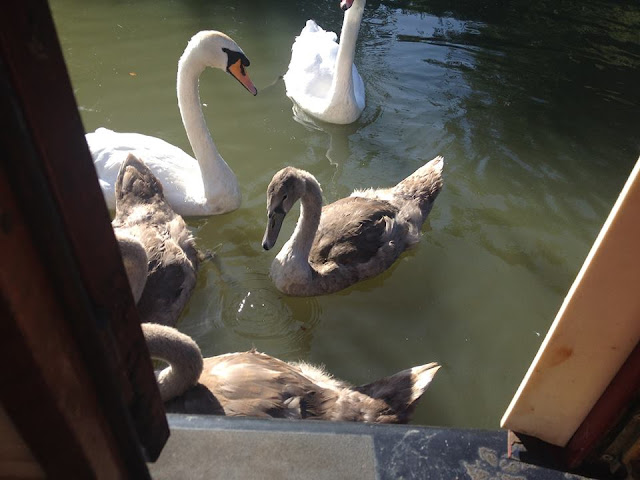 It was a beautiful morning so we sat outside reading for a while.  A family of buzzards were flying around above us but we couldn’t get a decent picture.  We decided to walk into the local town and get a bus to Rugby and have a look around.  Here is Buddy waiting for the bus – he seems to know when to conserve energy. 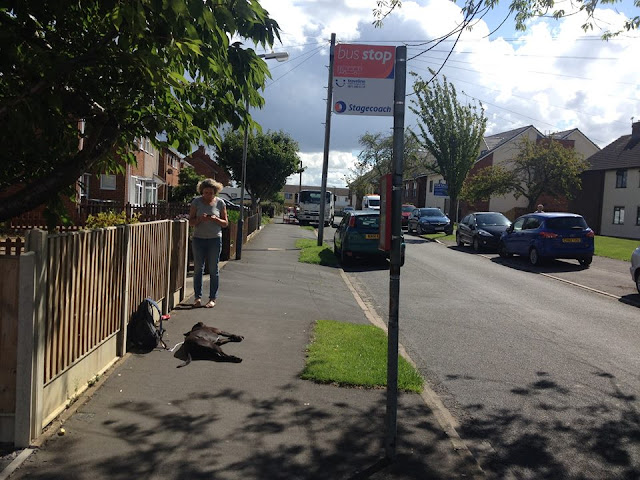 Karen spotted a Small Copper on the driveway of the house by the bus stop but unfortunately it didn't come any closer to us to get a better look. 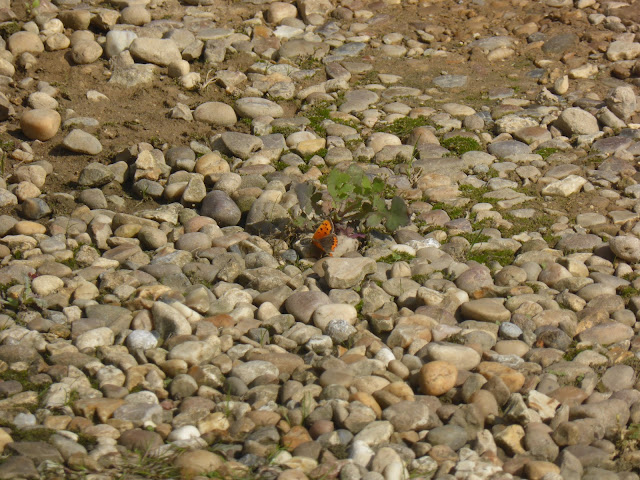 Rugby was making a big thing of the world cup – I expect a lot of foreign visitors will make their way there whilst they’re over to see some matches.  When we got home we started chatting to a guy who was picking blackberries by the boat.  He turned out to be very interesting: his main hobby is visiting post offices and getting a stamp (franking not postage) from each.  His collection of franks shows he has visited over 11,000 post offices across the world.  He also has a claim to fame as being one of two local people who had won £125,000 on the TV show Who Wants To Be a Millionaire?  His win was 12 years ago and coincidentally he was giving his daughter half of it this week to pay off her mortgage.

In the afternoon we cruised seven miles and down three locks to Hillmorton (south east of Rugby).  On the way we passed another boat named after a British butterfly. 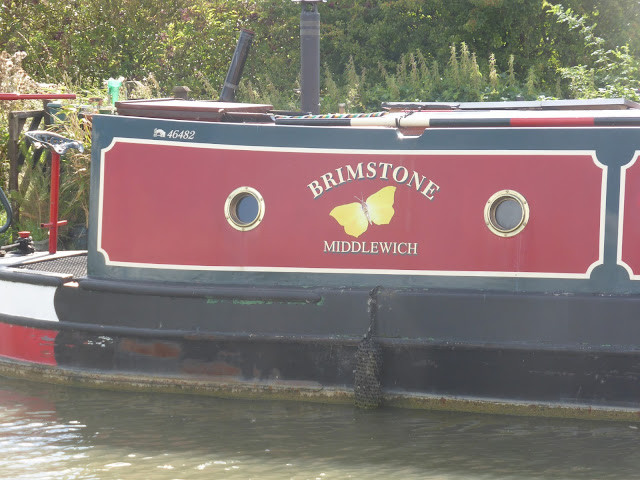 This is a turnover bridge just outside Braunston – the towpath crosses from one side to the other and horses could cross over without being uncoupled from their boat. 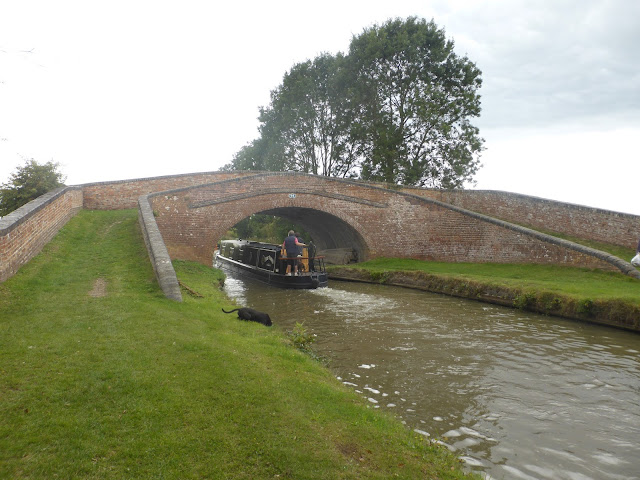 Under the bridge was a rotting stanking plank. 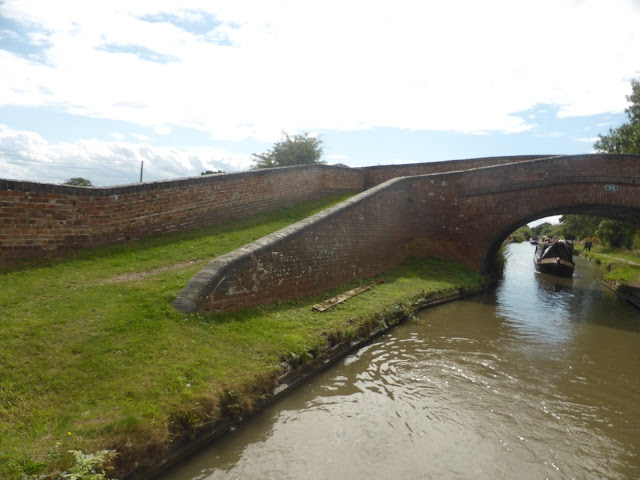 This boat followed us through the beautiful (in our opinion) Braunston turn.  We are now heading north up the Oxford canal and to the left is the Grand Union heading east and then south to London. 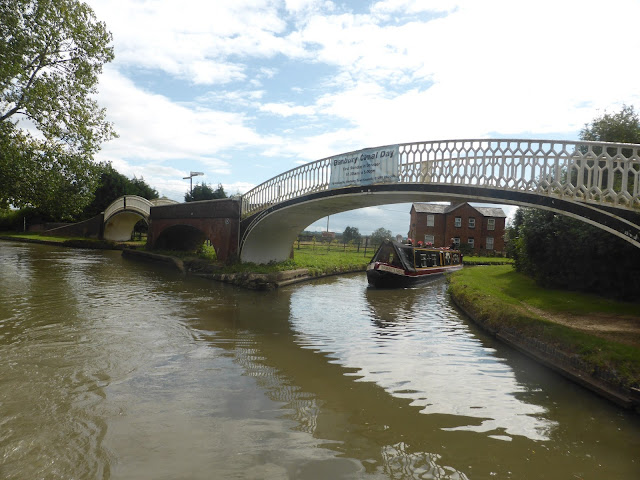 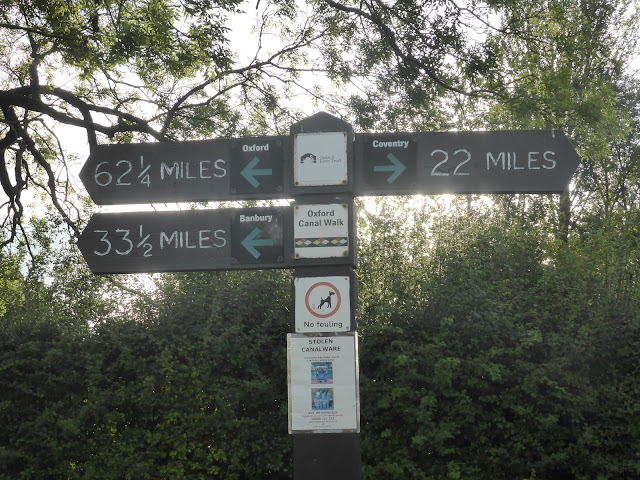 This is the unusual spire of Braunston church where many working boat families were buried. 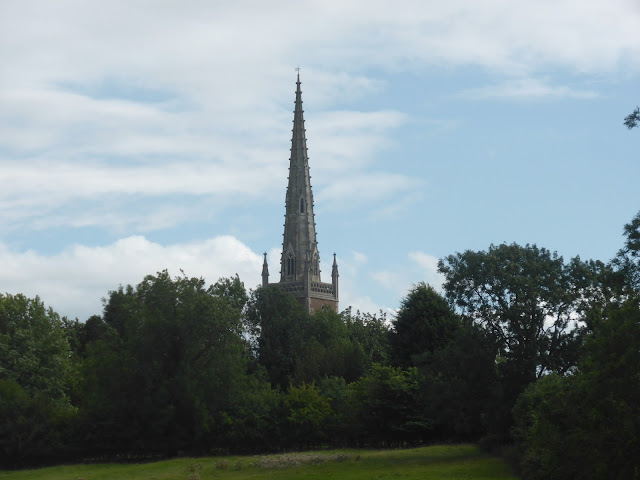 We were now on the northern part of the Oxford canal heading for Coventry. 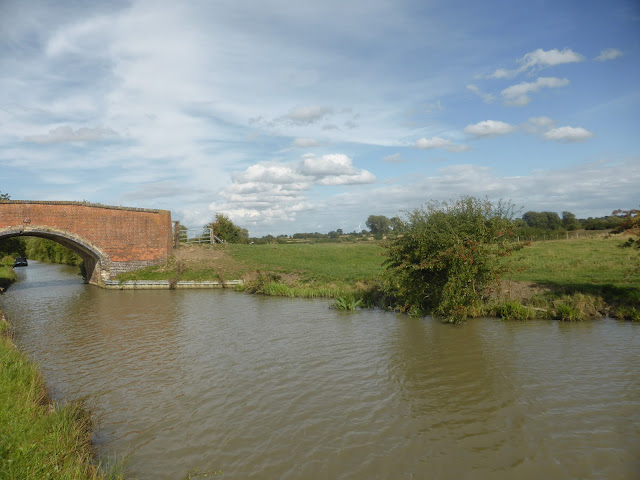 It really is a very rural stretch…

…apart from going under the M45 of course. 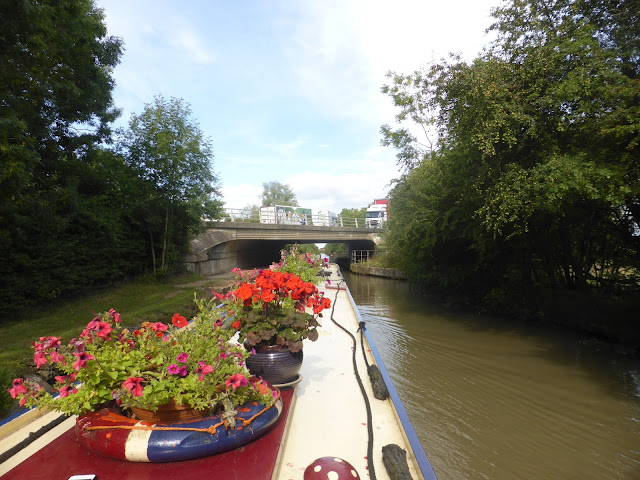 I rather liked this picture of us going into the top lock at Hillmorton. 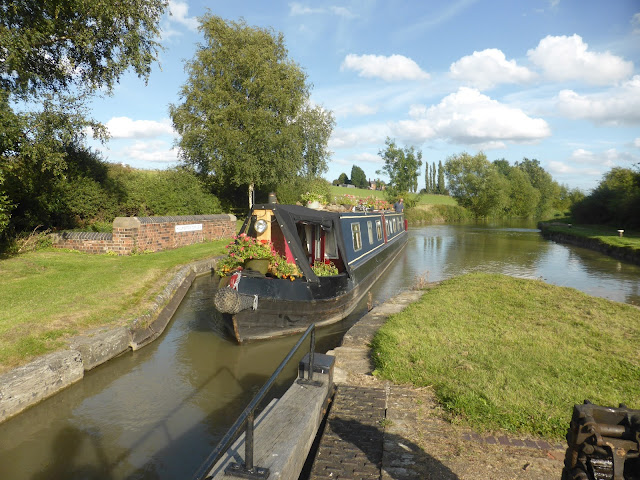 We descended the three locks at Hillmorton but there are actually six locks there.  Additional locks were built next to the originals because there was so much traffic heading for Coventry and Birmingham.  This was the second pair of locks. 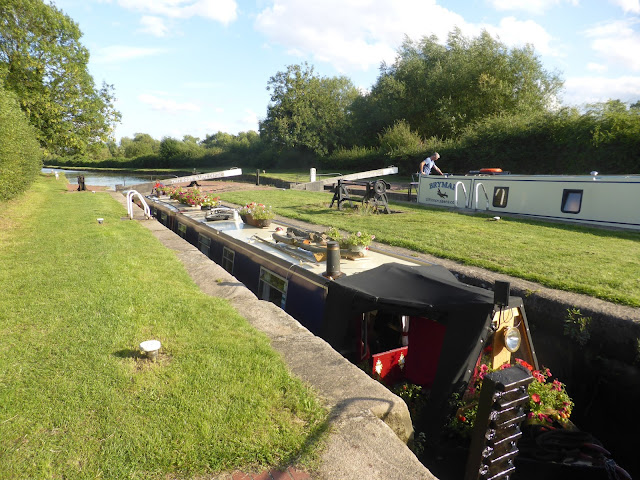 And here we are going down the third set. 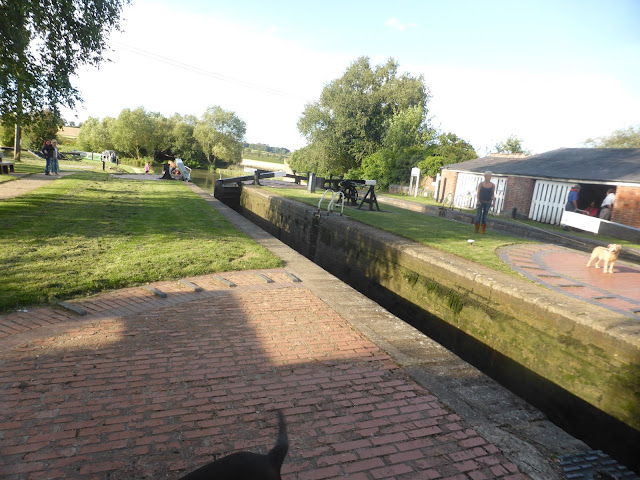 At the bottom a girl asked if I could help her retrieve her tennis ball that she had lost in the water. 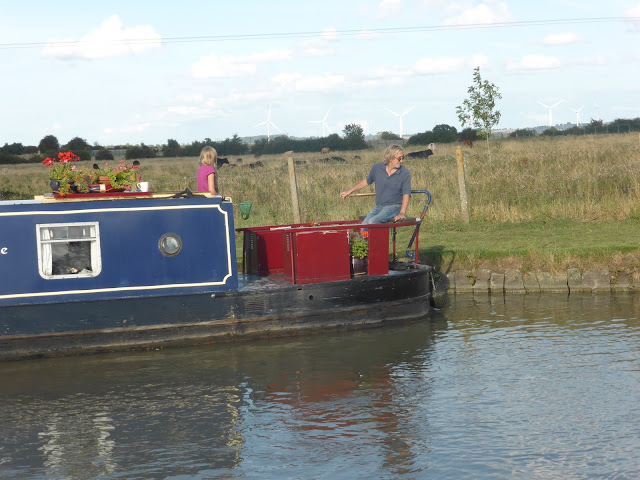 I was happy to help her and I took the boat over to the other side of the canal so she could retrieve her ball.  Once she got it I told her that all she had to do was swim back across the canal.  I’ll never forget the look on her face – I felt so sorry for her that I had to say I was joking.  It worked out well because we decided to moor up where we were for the night in sight of the wind farm near the M1 south of Leicester. 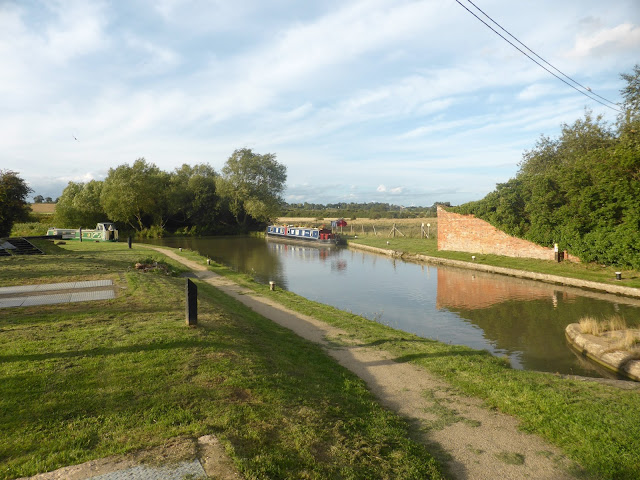 In the lock flight we passed an old arm that is now used as a boatyard. 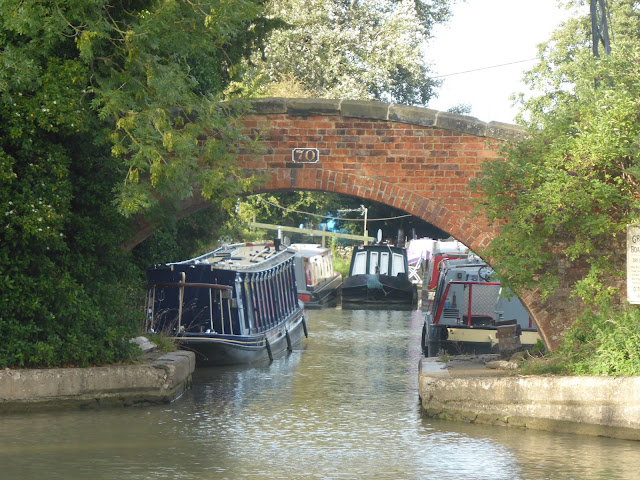 We had an early evening walk and came across this bridge that gave warning of a lower bridge within it – well, it tickled me. 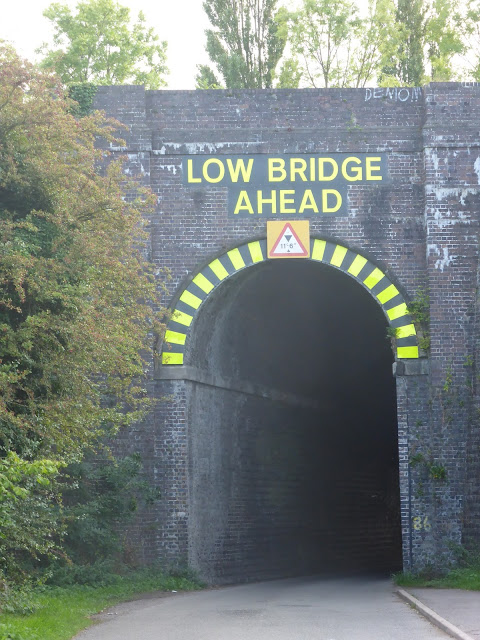 On the way back to the boat Karen caught me resting on some lock gates. 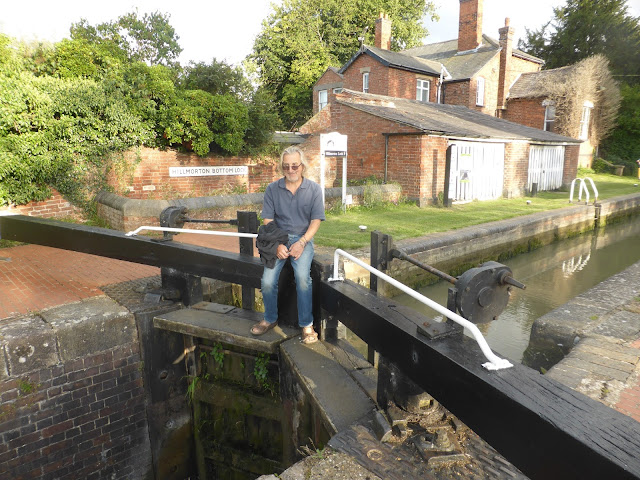 It was such a warm evening that we sat on the bank watching the glorious sunset. 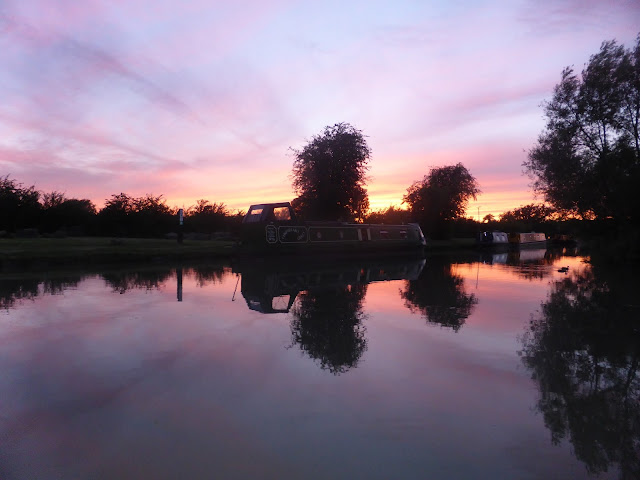