I made a big mistake on Wednesday morning.  Before we started cruising Buddy and I walked to Whittington to pick up some salad and fruit. As it was such a lovely morning I wore sandals which is normal when wearing shorts unless we are going for a serious hike.  Anyway I forgot about the storms on Tuesday afternoon and after walking a mile along the towpath my feet were caked in mud.

When we got back we set off for Kings Bromley – it was still early and I thought it would be best to travel before it got too hot.  After a few miles we approached the junction with the Trent & Mersey canal at Fradley.  This is one of our favourite canals and we feel quite at home here.  The name of the canal also makes me feel like we are no longer in the South or Midlands.

We turned left at the junction; right leads down to the Trent and then onto Nottingham. Apparently this junction (and the pub) are the most photographed places on the canal system.  I must admit that whenever we have been here it has always been busy with gongoozlers and boats whatever the time of year.  Today was no exception.

When I took the picture above we were actually stopped as I had to close a swing footbridge behind me.

There are five locks at the junction but three of them are to the right of the junction so I only had to go up two of them.  I still had to queue though at the first one.

There is a house by Shadehouse lock, the top lock, which has been for sale for five years.  Apart from being too expensive for the area it is right opposite the current route of HS2.  The original route was going to cross this canal in four places in this area but has now been realigned following protests.

I had forgotten that the locks in this part of the Trent & Mersey are not suitable for single handers in that you can’t step off the boat with a rope when going into the lock from the bottom.  They all have an iron or brick bridge over the entrance so would get you in rather a tangle.  The Stratford canal has similar bridges but they were built with a gap in the middle so that ropes could pass through.  Mind you, most are pretty narrow or have closed up now so are not really used.

It was such a warm evening that I sat outside until Karen came home soon after 8.  Buddy was desperate to go in the boat to sleep but will not stay in if I am outside.

A bit later on he started to disturb my reading to get me inside – by the way we wouldn’t normally read the Guardian but it was the only broadsheet left in the shop last Saturday. 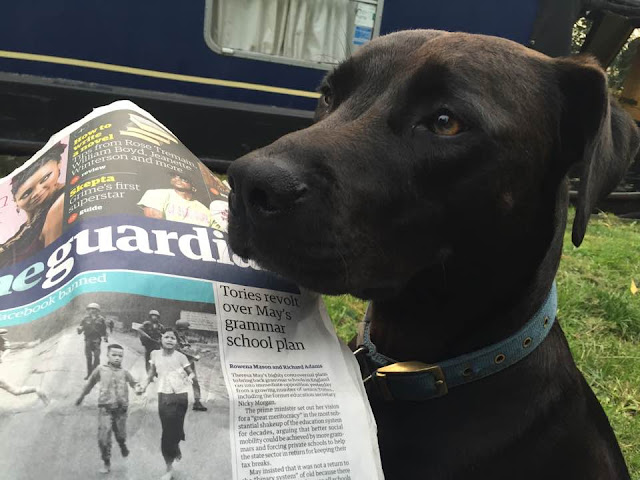 We now only have 54 miles and 55 locks to do before picking up the new boat.  We also have a big weekend coming up – we are taking a lot of stuff up to the new boat by car on Friday and need to get to Kidsgrove (on the Cheshire border) by Sunday evening to keep to our schedule.