Well, that’s six locks and 13 miles covered in the last couple of days; only 72 locks and 107 miles to go until we get to Northwich to pick up the new boat!

We moored up in Braunston to have lunch and visit the local butcher shop to stock up the freezer.  I noticed the girl moored behind me was offering to buy used batteries and as we have had three old ones on the back deck for about nine months I offered them to her.  She pays £5 for each battery and somehow recycles them and makes money out of it.

It was good to get back on a ‘narrow’ canal as it meant that wider boats, called broadbeams, would be absent.  They are such a pain as they are so wide and quite intimidating. The bridges and locks on narrow canals are only wide enough for a narrowboat like ours.  Saying that, a couple of bridges outside Braunston were unusually wide. 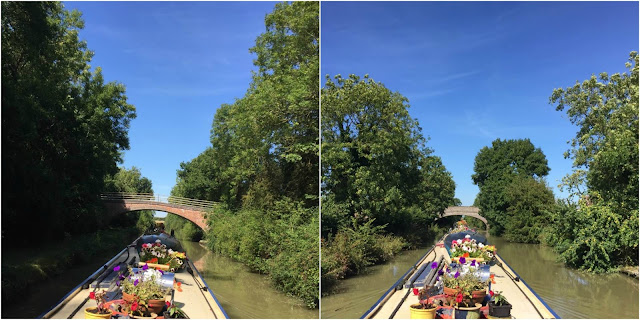 We passed through Willoughby, a village we have moored in many times in the past when we were continuously cruising and moving most days.  It crossed my mind we should moor there again, especially as there is a good pub in the village, but then decided to continue onwards.  After Willoughby the canal goes under the M45 on what is called the Barby Straight – a mile long dead straight section which to my mind is really boring.  So I thought it would be good to get that out of the way which is why I carried on.

Later on we got to the top of the lock flight at Hillmorton.  These are single width locks but built in pairs to ease the flow of freight traffic.  It was really strange going into narrow locks as we have been cruising around broad locks since February.

There seemed to be boats everywhere and it took a while to go down the three locks.  A couple of ladies, who were locking for their partners, were waiting for me to come down so helped out at the second lock.  I took advantage of this and stayed on the boat with Buddy.  Much easier than taking him off when I do the lock and then dragging the boat out so we can both get on at the bottom.

I saw Richard on one of Jules Fuels’ fuel boats in the pound before the final lock so I thought I would stop him and take on diesel.  I had forgotten that he only does gas and solid fuel but we passed the time of day and he also commented how busy it was.  We couldn’t understand why he was one of five boats in the pound waiting to go up.  Normally once you have queued at the bottom of a flight it is then easy going up the locks and no more queuing should happen in the intervening pounds.

Whenever I see one of Julia Cook’s fuel boats (hence the name Jules Fuels) I am always reminded of a really wet winter’s day in January 2014.  We had to get our boat to a yard near Aylesbury for blacking in the first week of January.  The weather had been pretty bad for a few days so we were behind schedule.  In the end we had to go for it on New Year’s Day and climbed the nine locks or so of the Marsworth flight in driving rain.  The flight goes past the Marsworth reservoirs and the wind was whipping up the water and blowing in across the canal to add to our discomfort.  Fortunately Jules was out delivering (fuel boats try and keep going whatever the weather as they are businesses) so we were able to lock up together.  It did mean waiting in a couple of locks whilst they delivered coal to the lock houses – there are two on the Marsworth flight that have no road access so the fuel boats deliver straight from the locks.  After a day like that it is always good to get back into the boat with a warm stove and getting dry clothes on – just like going for a walk in winter and going back to a bricks and mortar home with a roaring fire.

We moored up below the locks and sat outside in the sun until Karen came home from work.