Tuesday was meant to be a good day and it was, in that Mum came home from hospital and was keen to be totally independent.  The trouble was, when she was being brought home, my dad got caught up on a couple of his zimmers and fell over.  Of course, he was unable to get up on his own and called the emergency people via a call button he has round his neck that is linked to the phone line.  He was taken into hospital as Mum was being brought home, so they passed like ships in the night so to speak.

It transpired that he has a chest infection that has made him very weak.  It was amazing that on Monday we took him to see Mum in hospital and he walked using his zimmer; by the next day he was unable to move unaided.  Anyway, he is in the best place and when we left on Friday he had been signed off medically and was waiting to get onto the rehabilitation ward where they will hopefully build up his strength so he can go home.

The visit to Yorkshire this week was a bit different as Karen came up with me and worked from the B&B.

It was really nice having Karen stay during the week and we made sure she took at least one break a day to have a walk.   She was also able to help me do things for my mum and go and visit Dad in hospital.  When walking along the canal on Wednesday we saw our friend Nicola’s boat but she wasn’t on board – she was probably visiting her dad as her family are in the same position as us.

We did bump into her another day when she was driving off to see her dad, she stopped for a chat for a while and also gave us the news that the White Swan, one of the village pubs, had closed again.  It’s a popular place for drinkers, especially single boat people 😉

It was my birthday on Thursday so we went to the Mason’s Arms for drinks and then had our first ever visit to the Bollywood Cottage.  This is an Indian restaurant in the village that seems to be quite famous in the north.  The clientele were nearly all older than us so it was empty by 8.30 but must have been packed at 6.  Some of the WI were in having their monthly curry and they recognised us and wanted an update on my parents.

All the travelling up and down the M6 seems to have made me tired – this was me in Karen’s office on Friday morning trying to do some puzzles before going round to see Mum. 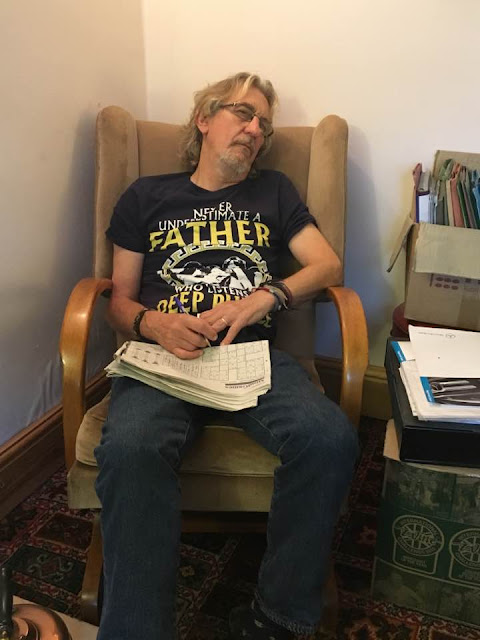 Having some spare time during the week I set about replacing our boat broadband SIM.  When we took out the contract we did it through our business account and so were ripped off in terms of charging.  We have been paying £36 a month for 30 gig; the service has been good through Three but it really was expensive.  We wanted to stay with Three as they seem to provide the best coverage on the waterways but, by getting a personal account, we now have 100 gig for £18 a month – a big difference!

We came home on Friday afternoon only to be caught in the M6 traffic jam around Manchester where an offal lorry had shed its load.  We were stuck for nearly two hours so were even more glad to be home.  Our neighbours were still moored with us but the leaves on our oak tree had really changed colour: 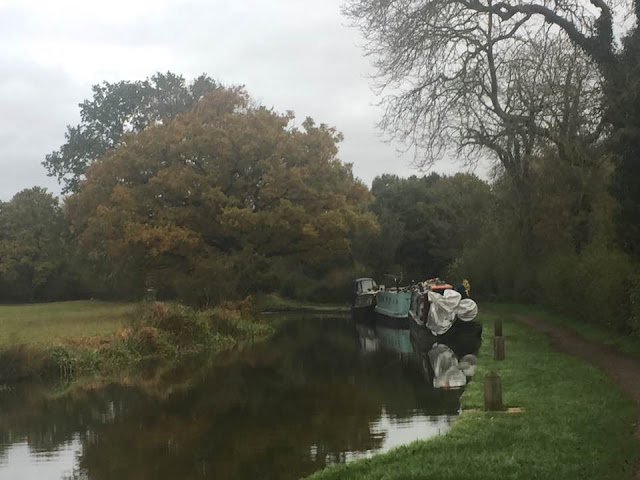 On Saturday morning, Karen went into Leam to pick up some things she had ordered and Buddy and I went up ‘our’ lock to get water and start up the Lapworth flight.  I say ‘our’ lock as we seem to be moored below it a lot and often go up to get water and come back down again so it must be one of the locks that we have travelled through the most.

Buddy's wound still hasn’t healed completely so he still wears his lampshade.  We took it off him a bit soon as he immediately licked his scab off and we have had to start again.

Our nasturtiums are refusing to die off – Karen is desperate for them to finish so she can re-pot the pots with the remaining bulbs and winter plants.

After taking on water, we headed across the basin to get the next lock set.  There were a few gongoozlers out already even though it was fairly early in the morning.  I got chatting to one couple whilst waiting for the lock to empty.  It transpired that they own a boat and moor it down at Calcutt -they were really envious that we lived full time on the boat as they only get to take theirs out a few times a year.

There is a small marina on the right before the next lock and most of the boats are residential so we have got to know quite a few of the people who live there.  Many of the locks on the flight will be closed for maintenance in a week or too which effectively puts the flight out of action until Christmas.  So we won’t be back to Lapworth for a couple of months – which is practically New Year – where did 2017 go?

There are 26 locks on the Lapworth flight and we have been moored just below the sixth lock from the bottom.  We planned to go up seven locks and moor by the Boot where Karen would park the car and come and meet us when she got back from Leam.

When one of the pair is open it is possible to step across the gap to the other gate to open that too.  This saves walking all round the lock to get back to the boat.  Of course you have to open the furthest gate first otherwise you end up having to walk round the lock anyway if you see what I mean.

Buddy seems unperturbed by his lampshade but it does make some other dogs bark at him as they don’t understand.  Here he is waiting for me to come into one of the locks: 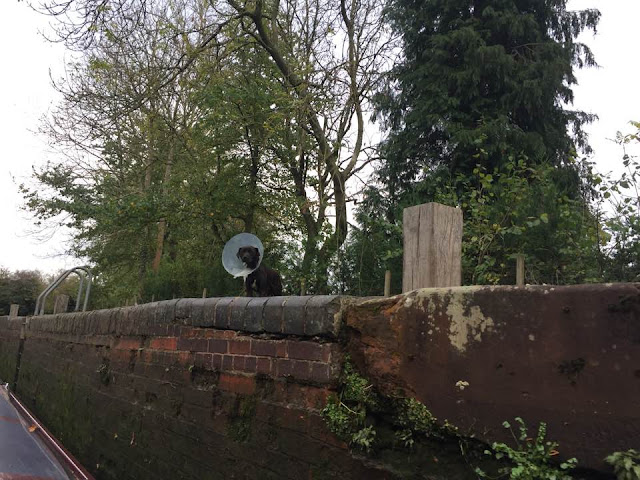 There was a lock keeper working on the flight but she was helping the working boat down.  There were two guys on the boat so it struck me as odd that she worked with them rather than offering to help me as I was single handed.  As it was, I was quite relieved as I was only doing seven locks and I prefer the solitude apart from the fact that extra concentration is required if someone other than Karen is helping out (or willing friends like Mike and Lesley 😉).

Karen met us when we had two locks left but as we hadn’t had lunch yet she went inside to make pumpkin soup.  Karen cannot resist buying a pumpkin at Halloween, although last year, Mike and Lesley bought us one when they visited us at Braunston.

We moored up outside The Boot pub for the rest of the day and went for a circular walk in the late afternoon, taking in Lapworth church which Karen hadn’t seen before.

We will probably go up the next nine locks on Sunday and moor in a pound that gets plenty of light.  We will probably stay there until next weekend as Chris and Sue are visiting on Friday and car parking is fairly easy in that pound.

We have to finish the flight next weekend and get through Shirley lift bridge as it closes for maintenance for five weeks, otherwise we won’t be able to get to Birmingham for the weekend of 17th November.

By the way, we are in countdown mode now - 19 weeks left until Karen finishes work and we can be off on our travels around the North again 😊