Hopwood (we are now on the Worcester & Birmingham canal)

It was going to be a relatively busy day for Buddy and me on Tuesday, so we set off from where we have been moored at Shirley for the last ten days, at 8.30.  Compared with the last few days it felt almost balmy but after 15 minutes or so it did start to feel cold.  Other than jumping up and down there is no chance for moving the body when I’m standing on the back of the boat driving.

I know it’s not a tasteful subject, but we have been pleasantly surprised by the lack of dog mess on the towpaths around Shirley; most built up areas seem to suffer badly these days.  Mind you, in terms of graffiti, it seemed just as prevalent as any other town.

Our first destination was the water point at Warstock where we would stop and do some washing as well as taking on water.  I was quite happy to moor at the water point as there wasn’t going to be any boat traffic because of the closures and there had been no one else moored near us.  There were two boats moored, in the opposite direction to us, near the water point that had obviously got themselves ‘stuck’ so they couldn’t get through the closures.  This meant they probably wouldn’t get any hassle from the authorities for overstaying.

Another sign of being in a built-up area are the window protectors on the boats moored at the end of people’s gardens.

After getting water, we carried on to Lyons boatyard for coal and a pump out.  They didn’t stock our usual brand of coal, so I bought a couple of bags of two other brands to see if they were any good.  It’s strange how some coal just won’t burn well in the stove whereas another brand can almost get too hot.  We haven’t tried either of these new brands on this boat so it’s fingers crossed they work well.

Whilst cruising past the residential boats at the yard guys came out of two different boats to ask if the Shirley lift bridge was now open – I was the first boat they had seen since the closure just over a week ago. I explained that we had been moored by the bridge since the closure and that it was time to move on.

The canal then passes under the busy A435, a major road into the south of Birmingham.  Most people travelling on the road wouldn’t even know they are crossing a canal at the Horseshoe pub.  With so many canals in Birmingham we often have a bit of a game when driving to see how many times we spot the road crossing a canal.

The graffiti on the bridge and lock mechanism is constantly cleaned off but is soon replaced by more.  Consequently, each time we pass through, the view is slightly different. 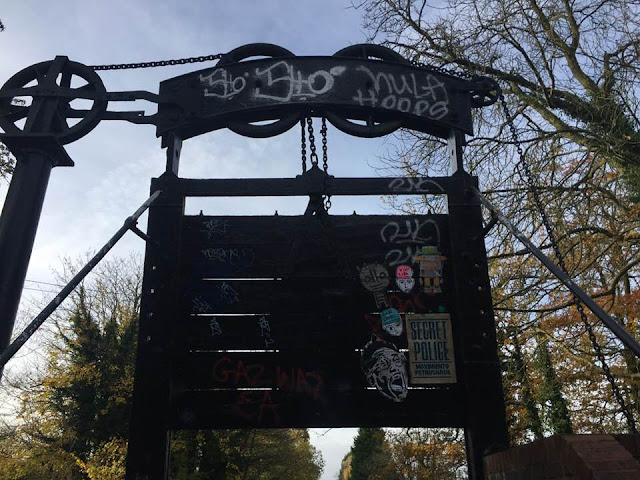 The junction marks the end of the Stratford canal and its meeting with the Worcester & Birmingham canal.  To the right the canal runs pretty dead straight for file miles into Birmingham through Bourneville and Edgbaston.  We were turning left (south) so we could spend a few days at Hopwood and then come back up to Birmingham on Friday.

The house at the junction used to be the offices of the Worcester & Birmingham canal company.

I decided to stop for lunch at the junction before the final few miles down to Hopwood.  We were heading for Hopwood as there looked a good spot (on satellite images) for Karen to park the car and it is also only ½ mile from a junction on the M42 so an easy journey for her to get to work – well, a lot easier than being in the middle of Birmingham.  That’s why we will only be in Birmingham over the weekend.

The red metal plate in the bridge parapet (above) is a good sign that we are in the Birmingham area.  These doors were put in during the war so that fire appliances could have easy access to water following bombing raids.  These doors are also a good way of spotting, when driving around Birmingham, if a road is going over a canal or even a canal that has now been filled in.

We soon reached the 1 ½ mile long Wast Hills tunnel.  When the canal was first opened at the end of the 1700s boats were either poled or legged through but in 1872 they brought in steam tugs that were used to tow boats through.

Some people really don’t like tunnels but they never bother me, whether on my own or with Karen.  Mind you, it does get a bit boring as it takes about half an hour to get through and by the end I was singing and shouting away about ghosts and other spooky things 😊

Talking on the phone to one of our daughters later, she pointed out that I should really text Karen when going into a tunnel on my own and then text her again when I come out.  This is quite sensible, especially at this time of year when there is little traffic, as there would be no way that I could attract attention if the boat broke down or something.

My plan had been to moor at bridge 69 just south of the tunnel where a country lane crosses the canal.

When I got to the bridge I realised that the bank was too high and steep for Karen to clamber up and down in her work clothes – there weren’t even steps – so I had to carry on.

I carried on another ¼ mile and moored near the Hopwood House pub where at least there was easy access and somewhere for Karen to park.