Calcutt (Back to the Grand Union and Napton reservoir)


When we were walking back from the pub on Sunday, there was a boat in a lock and they called out to us.  It was a couple we have met a few times over the years but never spent a lot of time together.  They have a house in the next village to where our house is and, like us, they rent theirs out whilst they are living on their boat.  Their boat is called Brindley and we know two other boats with the same name in the area so we often get into embarrassing conversations when we see a Brindley as we always think it’s the same people even when we know they look different!

Monday was a day of going for short walks between the showers, which were really heavy at times; at one stage, poor old Buddy was trying to shelter inside a hedge.  In the evening, we went to play bridge with our Stratford ladies.  This was the first week we have played for a while because of my back but it was fine so I feel practically back to normal now, I even drove home as well.

It was time to move on on Tuesday otherwise we could be accused of overstaying at the mooring in the bottom pound at Napton.  Karen and I both fancied mooring at the reservoir at Calcutt for a couple of weeks and as I would only have one lock to do on my own we both felt my back would be OK.

After going down the lock (with no ill effects on my back) I stopped to take on water.  For some reason it was really busy, there was a boat waiting to get in behind me and he was blocking the bridge… 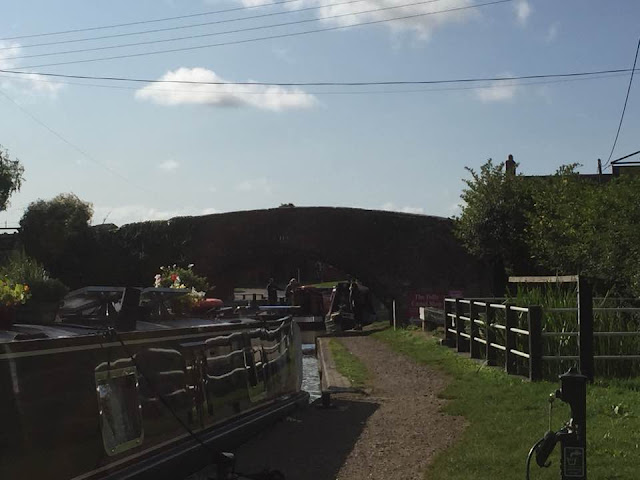 …there was already another boat at the water point and one waiting behind him: 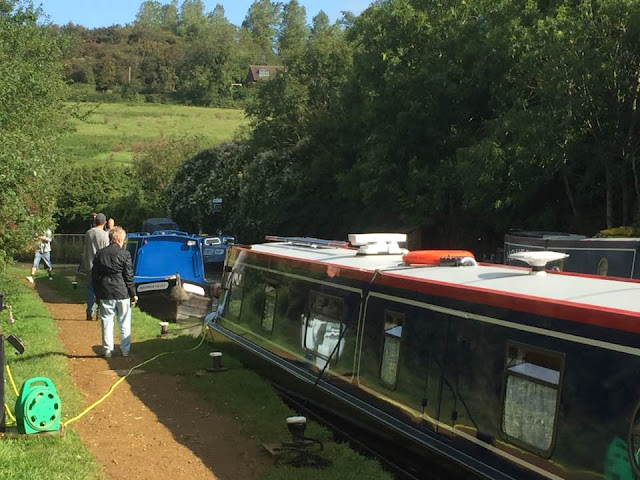 I took advantage of the wait and put the washing on so at least I could replenish the water when it was my turn.  It didn’t take long and I was soon on the move again.  The wind was getting quite strong but I knew it was going to be worse on Wednesday which is another reason for moving on.  I was getting a bit concerned about mooring up on my own at the reservoir as the wind can whip across there and last time I nearly lost the boat.  To make it more difficult you have to find suitable trees to moor to as it is on the offside, i.e. no towpath and therefore no places for mooring pins or hooks.  Mind you, that’s one of the reasons we love mooring there as it is not on the towpath and therefore you can go all day without a single person walking past the boat.

Napton visitor moorings below the lock were practically empty – It’ll be a different story in the coming months as it’s a popular spot for people like us who continuously cruise through the winter.  It’s near a water point and had good parking for cars as well as boats.

Soon after the junction is the reservoir and I saw that there were already two boats moored up where we wanted to be.  In the end, it was fortuitous as I was having a little trouble mooring in the wind – I didn’t want to put my back out again – Paul came out of one of the boats and held a line for me as I moored up.  He and his girlfriend have a boat each and they moor here whenever they can as well.

In the afternoon, Buddy and I walked along the canal to Stockton and back.  I checked my log and my back must have been bad for a good few weeks – the last time I did locks on my own was at the end of July, here on the Grand Union.