Hallignicourt (not alone after all)

To get a good breeze through the boat during the hot weather, we take the porthole windows out and leave the side hatches and front and rear doors open.  At night we put up our Karen-made mosquito nets over the openings so we can keep cool without worrying about being attacked by mossies.  We have to keep an eye on the overnight forecast though, just to check there’s no chance of rain, otherwise everything has to be closed up and we end up sweltering during the night.  We had some unexpected rain in the early hours of Friday morning, so we had a bit of a panic running around the boat putting windows back in and closing the doors and hatches before it got too wet inside.  The rain didn’t last long and, apart from some cloud covering, there was no sign that any rain had fallen when we got up.

When VNF stopped yesterday to check we knew the 100 mile northern end of the canal was closing next Tuesday we asked them what other boats are around.  Apparently, there were none in the 40 miles in front of us and also none coming the same way as us in the 60 miles behind us.  This meant we knew we wouldn’t meet another boat or have one catch up and overtake us for the next five days and definitely wouldn’t have to worry whether or not mooring spots were free.  Karen also pointed out that we could revert to mooring UK-style and moor anywhere we like using pins because there would be no commercials or large barges passing.

In the spirit of finding new places to stop we set off on Friday morning for Laneuville-à-Bayard where the mooring guide told us there were three bollards between a lift bridge and a lock. We weren’t convinced they were there because we hadn’t noticed them on the way up, so it was a pleasant surprise when we found them.

It turned out to be a good spot as the willow tree, where you can see Buddy asleep in the shade, provided shady cover for the boat in the evening. Just before we stopped, we had gone down a lock with an abandoned lock cottage and we could see why it wouldn’t be an attractive proposition these days.  The railway line ran right outside back door so there would have been no garden whatsoever.

The flowers in Laneuville-à-Bayard followed the same scheme throughout the village: 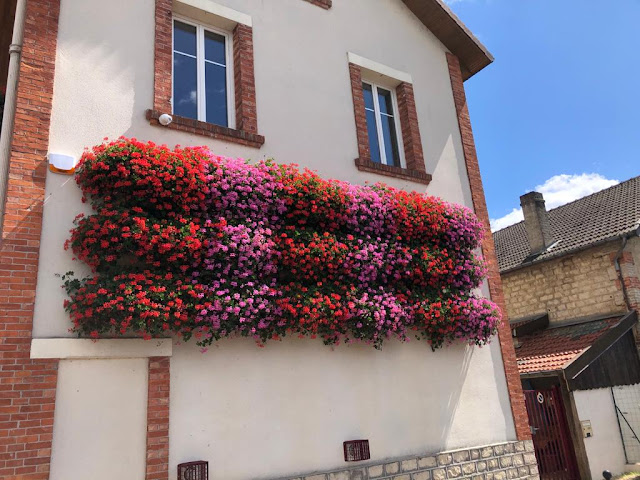 On the outside of the village was an iron foundry that makes iron pipework.  Even the factory continued the flower decoration theme.

The green bridge is crossing a mill stream from the Marne that was used by the original iron foundry built here.

At the other end of the village we came across a lavoir fed by a stream running into the Marne.  Considering how villages often show off their lavoirs we were really surprised to see it wasn’t adorned with flowers.  It was obviously looked after though, as it appeared to have been recently re-tiled.

On Friday we cruised seven miles down five locks.

With only four days left to get off the canal, Saturday saw us making our way to St-Dizier where we had only left a week ago.  It was an eerie feeling being the last on the canal.  It was almost a sad feeling as the lights on the locks and bridges were turned off after we’d been through because they wouldn’t be used again until who knows when.  An éclusier in his van came alongside every so often to check our progress and we were glad he was there as he was on hand when one lock and one bridge failed to operate for us.

Worryingly, the weed was quite thick in some pounds which meant we had a few trips to the weed hatch.  I say worryingly because, if the canal is not going to be used during the summer, I would imagine the weed will only get worse, making it more troublesome when it does finally open.

We’ve agreed that we still want to go down the length of this canal and make it third time lucky.  The latest suggestion (Karen’s idea) is that we do it early next year, in say February, on the assumption enough water has fallen by then.  At least, as a commercial canal, it would normally be open all year and no doubt will be re-opened as soon as possible for economic reasons.

As expected, we didn't see any boats and were the only boat at St-Dizier when we moored up.  Our first task was to go and check the car was OK where we’d left it, which it was.  As it was a hot and sticky day we felt quite tired and just lazed around for the rest of the day.

During Saturday we cruised 10 miles down six locks.

On Sunday morning we were just about to go and visit Lac de Der to have a picnic, a large reservoir near St-Dizier, when we heard a boat coming past.  It was a small Dutch barge flying a German flag and we were quite shocked as we thought no boats were headed our way.  They were clearly in a rush to get off the canal as they went straight through the port without even stopping for water.  Stepping off the boat, we saw another boat heading our way and could see it was a commercial.  Clearly my understanding of the conversation with the éclusier when I concluded we were the last boat on the canal, wasn’t quite right!

Lac de Der, with its 7 ½ mile long circumference, was an impressive size, not surprising really as it’s the largest artificial lake in France.  It was constructed in 1974 as part of the flood defence system for Paris.  Water from the River Marne, which feeds the Seine, can be held back in the lake to perform this function.  Quite amazing when you think it's 250km from Paris.

The lake is fed by a 12km long canal that runs down from the River Marne in St-Dizier and the outflow enters another canal that re-joins the River Marne 20km downstream of St-Dizier.  Three villages were lost when the lake was constructed, and we don’t know if they had any lavoirs 😉

We walked around some of the lake and saw quite a few butterflies including this male silver washed fritillary that was rather the worse for wear.

As we still had a fair way to go to get off the canal by Tuesday, we took a bite out of the journey during the afternoon and cruised down to Hallignicourt.  It also meant Buddy could stay outside in the evening whereas in St-Dizier it wasn’t possible as we were moored in the middle of a town.

On Sunday we cruised four miles down three locks and will now feel very surprised if there are any more boats behind us.