We set off at nine on Thursday morning to travel six kilometres before meeting our éclusier at the first lock at ten, mistakenly thinking it was going to be another glorious day.

It wasn't long before the clouds started rolling in, but thankfully they never turned to rain during our long cruise to Digoin.  It was hardly spring like weather either, especially once the wind got up during the afternoon.

The bollards on the sides of the locks were closer to the edges than of late so, rather than climbing up the steps, Karen could resort back to securing the boat without getting off.  To be fair to the éclusiers they do send a grapple down to take ropes on locks that are deeper than 3.5 metres or so.

It was an uneventful journey and we were back to seeing no boats on the move.  This surprised us as we thought the Easter break would have brought boaters out by now.  We did pass a line of moored boats and then realised it was a boatyard.

We saw four stanking plank stores during the day; three were by locks and one on a small aqueduct.  One of the stores even had an outside loo next to it!
We also saw an unusually painted hotel...

...and some unusual canalside art 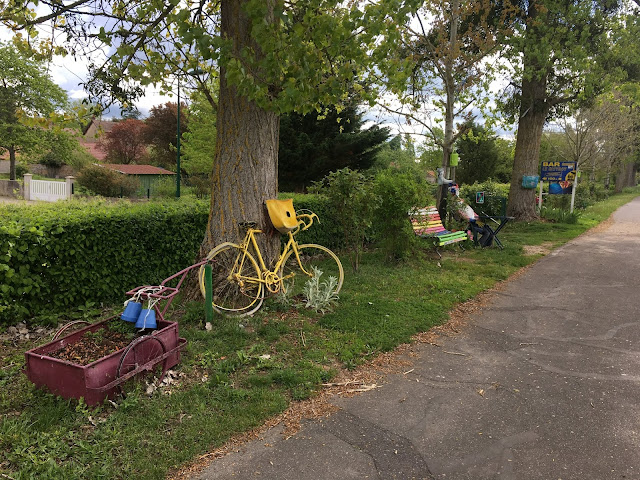 It was mid afternoon by the time we were heading into Digoin, our first proper town since Clamecy three weeks ago.  On the outskirts, the Canal de Roanne à Digoin heads off 56 kilometres south to Roanne but we carried straight on into town.

We were soon into the last lock of the day and the last (or first) lock of this canal.  The Canal Latéral à la Loire ends at Digoin and next we’ll be taking the Canal du Centre all the way to the River Saône.

After coming out of the lock we crossed the Loire on a 243 metre long stone-built aqueduct.  We thought it must have stunning views over the river and the town in the summer, but it was a bit gloomy when we went over.

We moored up just before the port in the centre of town and went for a bike ride further along the canal with an excursion around the town itself.

During Thursday we started just before Doui, cruised 24 kilometres up five locks and finished in Digoin.

For once there were quite a few people around but still not many shops open.  We’ll pop in again on Friday morning as it’s market day.

My French accent has always been obviously British, so I’ve been trying hard to practise it by repeating a lot of what people say to us.  One very simple word is, ‘bonjour’ and as we haven’t been in a large town or city yet, everybody (even youths) greets everybody with a, ‘bonjour’ which can be a bit monotonous when walking past a hiking group of a dozen or so people.

Older people say, ‘bonjour m’sieur ‘dame’ to us and that could the done thing to say to a couple who are younger than yourself or maybe it’s the manners of the older generation.  Anyway, after most encounters I can be heard muttering, ‘bonjour’ as part of my practising and Karen can be heard laughing. She thinks it’s especially funny when I’m in shorts and a tee-shirt because my white legs and attire make it obvious that I’m a foreigner at this time of year, let alone my faux French accent 😉

We were up early on Friday to visit the market in Digoin before Karen & Buddy had their run.  There were only four stalls but at least we got most of the fruit and vegetables we needed.  With only four stalls, the car park in which it was held hadn’t even been closed. There was also a little old lady selling nothing but free-range eggs, so Karen was pleased to get a bargain and bought a couple of dozen.

After they returned from their run it was a quick cycle ride to Leclerc to stock up on dairy products like fromage blanc and then back for lunch before setting off onto the Canal du Centre.  This canal runs from Digoin at its western end up to Chalon-sur-Saône at the other, thus providing a route from the Loire to the Saône.  This canal therefore enabled through passage from the Mediterranean via the Rhône onto the Saône and then the Loire to the Atlantic at Nantes.

The canal was opened in 1792 primarily to transport coal from the mines around Montceau-les-Mines. It is 112 kilometres long and has 61 locks which are not manned; they are set from a command centre that we have to keep in touch with as we travel the canal.  Once in each lock we have to pull a cord to start the lock operation.  When the operation is complete and the gates open we have one minute to leave the lock before the gates close – that could be fun if we’re sharing with a lot of boats 😉

As with the other canals we have been on so far, the locks are built to the Freycinet standard size of 38.5 x 5.05 metres.  We will be travelling the length of the canal to join the River Saône which we will travel for 70 kilometres upstream to join the Canal de Bourgogne and, when we get to the end of that we will have completed our 665km round trip of Burgundy.

Dark clouds kept threatening all day, but the rain never came and the sun, when it was out, was warmer than the last few days.  Before leaving Digoin we passed through the port where there are a couple of hire boat bases.

The eastern end of town had a small amount of industry, but we were soon back out into the open country.

A kilometre out of town we passed the entrance to the Rigole de l’Arroux, this is a small gauge canal that is no longer navigable even by narrowboats but is retained as it is used as a water feeder to the Canal du Centre.

After another five kilometres we came to our first lock.  The light was on green so the command centre must have understood our request to have the lock ready for 10am 😉

As the controls to operate the lock are up on the lock side, Karen climbed up the lock ladder and secured the boat before setting the lock operation in motion. 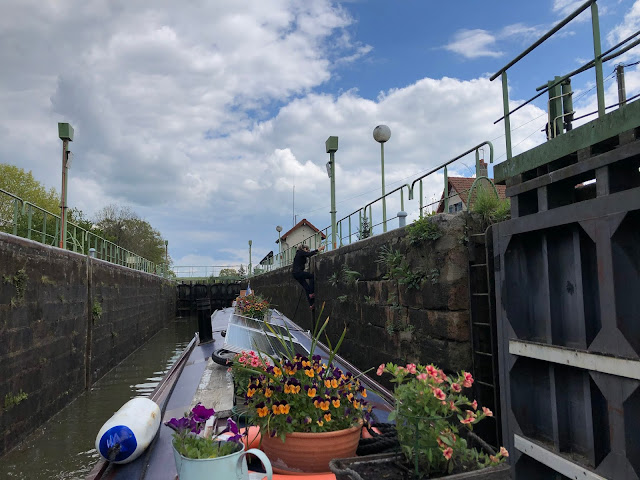 Once the cord was pulled, we waited for 40 seconds and then the bottom gates closed, and the lock started filling.  Once full, the top gates opened and off we went.

The cord could be pulled as we entered the lock thus obviating the need for Karen to clamber up ladders.  The trouble is that with only 40 seconds to then get the boat secure, if we mistimed things then the lock would start filling before we were ready.

Each of the six locks we went up were ready for us when we arrived and all but one had the green light on to let us go in.  The second lock had no lights lit but the gates were open.  Karen checked the lights on the other side of the lock for boats coming the other way and, as none were lit that side either, we went into the lock anyway.  Try as we might we couldn’t get the lock operation to start so had to telephone for an éclusier.

The éclusier arrived within five minutes as promised and after a bit of playing around with controls in a little hut managed to override things and got us through.

The lock information plates on the lock cottages on this canal are a lot simpler than the ones on the other canals we have been on.  They give the canal name, a lock number, but no lock name, and also the number of metres to the next lock in each direction.  The ‘Océan’ indicates that the lock is on the Atlantic side of the summit at Montchanin.  Once we start going down the other side I am expecting ‘Océan’ to be replaced by ‘Méditerranée’.

We went through one other large town on our cruise on Friday, Paray-le-Monial.  It had more mooring bollards and rings than we have seen anywhere else so far but there was only one boat moored there and that was because they had broken down.  Suspect it’s another place that’s heaving in the summer months though.

We came out of the last lock of the day and moored up a couple of kilometres from St-Aubin-en-Charollais.  As has been the case on days like this the clouds rolled away, and we had a pleasant late afternoon and evening in the sunshine. 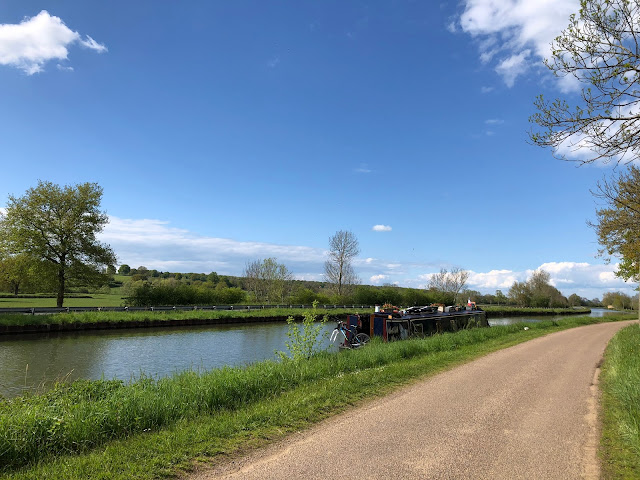 On Friday we cruised 20 kilometres up six locks and have now reached the southern point of the Burgundy loop.