The tall and overhanging trees meant it was quite dingy where we moored on Saturday night above Hatton top lock.  So, on Sunday morning, we cruised on a little way to Hatton station.  That made it three days running that we have moved which is a first for a couple of months. It’s a really good mooring as Karen can leave the car in the station car park overnight and it’s out in the open so we get the sun all day.

The only drawback is that the M40 is only a mile away and if the wind is in the wrong direction, constant traffic noise can be heard in the background.

We did more gardening during the afternoon – getting rid of the summer plants that have now gone over and filling the pots with new soil and winter plants.

Karen had bought some solar powered butterfly lights so rigged those around the front of the cratch.  This is a picture taken in the daylight so you can’t really see what they look like.  I have to admit that they were really quite pretty once they came on in the evening and at least they’re not Christmas lights 😉 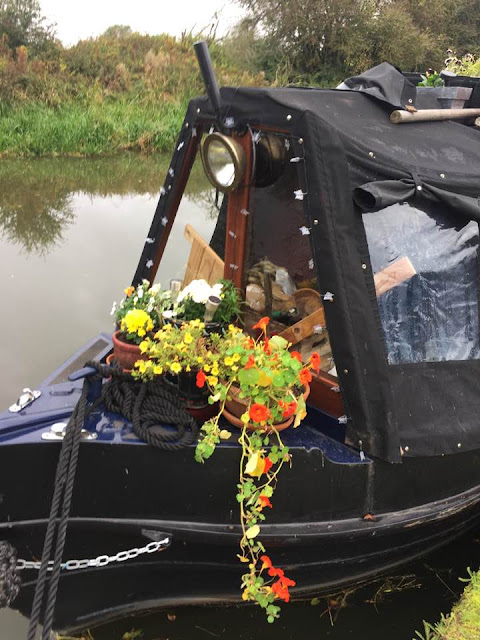 It’s amazing how much we found that hadn’t been used for a year so things were sorted into, rubbish, charity, recycling and storage.  The recycling was really stuff to be reused by boaters rather than going to a charity shop – things like books which can be left at service points where boaters tend to have unofficial book exchanges.  Stuff for storage would go into the car to be taken to our storage unit next time we go.

During the day we had noticed mallards displaying and mating which we thought was a little late in the year and then later in the afternoon, to our surprise, a new brood came swimming past the boat: 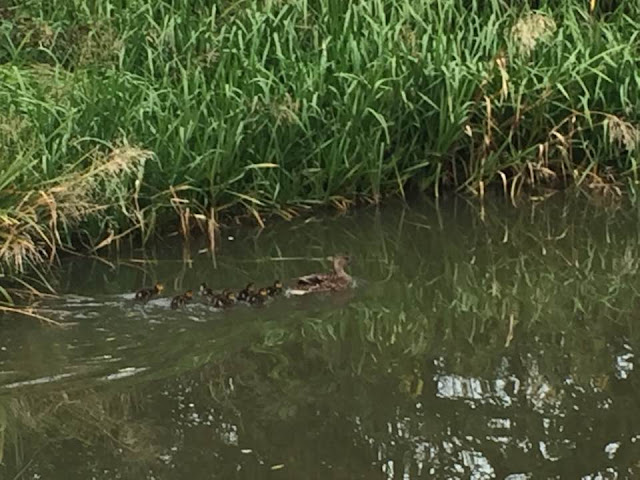 Judith and Nigel popped in for a few hours in the early evening on their way back from parent-caring in Yorkshire so we had a pleasant evening drinking and eating in as we hadn’t met up for a while.

Judith always takes the mickey when we moor in spots where traffic or train noise can be heard.  She has pointed out in the past that we often say we are in idyllic locations but when she arrives she can hear the traffic noise which rather removes the idyll 😊