Since we have been moored at Marston Doles a lone duck makes an appearance whenever I open the side hatches.  It’s obviously a cross breed but very friendly – it comes even though I have never fed it.

After getting the washing done first thing on Monday I decided to take a walk across country into Napton.  The village stores have a Post Office and I have only recently learnt that cheques can be paid into bank accounts at PO counters so It was an ideal opportunity to get some cheques paid in.

I picked a circular route that would take me by the Old Engine House Arm and then down into Napton and back by the canal towpath.

The first field I came to didn’t have any crops or livestock so it was safe to let Buddy off for a run.

I then got a little lost and ended up in another field where there were a lot butterflies flying around – mainly tatty Common Blues.  Poor old Buddy didn’t like it as there were a lot of thistles and he was being incredibly wary.

I retraced my steps to find out where I had gone wrong and then found the path again.  There was a gap through a hedge with a footpath sign but it was very overgrown.

I soon came to the Old Engine House Arm.

In order to supply the Napton flight of locks with water, a pump house was built at a well head and it began operation in 1793.  Water was pumped into the arm which ran for about ½ mile before joining the Oxford canal between locks 14 and 15 on the flight.  I cannot find out when it ceased operation but pumping was restarted in 1911 using two traction engines to raise the water.

It seems that it was converted into a barn or cowshed many years ago with the addition of a lot of corrugated sheeting.  I could only find one picture on the web and that is relatively recent but at least more of the building was standing then:

After popping into the village stores we walked back along the towpath past all nine locks in the Napton flight.  Jane and Alan (he of Karen’s team at work) had moored overnight in the flight but Jane had long gone by the time we walked up.  They have the reverse roles to us – Jane has retired like me and Alan has a short term contract like Karen.  Which reminds me that Karen has now entered her last six months 😊
Near the top of the flight we passed the entrance to the Old Engine House arm.  A dozen or so boats moor along the first section which is still navigable.  Rather a nice place to have a permanent mooring as it is away from people as there are no public rights of way on that side of the canal.

I’m not sure if I have mentioned it before but Buddy is a rescue dog we got from the RSPCA when he was less than a year old and we weren’t given any background.  We soon learnt that he was frightened of metallic grating sounds.  So, for example, the sound made by floating pontoons when they rise and fall with the river flow.  As we rarely moor at places like this he doesn’t often get scared.

When we were moored at Cropredy, several boats bumped into us and each one really freaked him out.  He can now sense boats coming long before we do – either by sound or the motion in the water.  As soon as he is aware of a boat approaching he wants to get right next to us for comfort.  Obviously, we reassure him but we can’t stop him doing it poor lad ☹  Fortunately he is only like this inside the boat otherwise he wouldn’t have much fun as a liveaboard boat dog.

We are moored just above the top lock and a sharp right hand turn has to be made when you are leaving the lock.  It’s fine if you are aware of it, but if you’re not then it’s easy to get stuck on the side of the canal.  Our mooring gives us rather a good vantage point.  This picture shows a boat coming out of the lock and you can see the turn that has to be made: 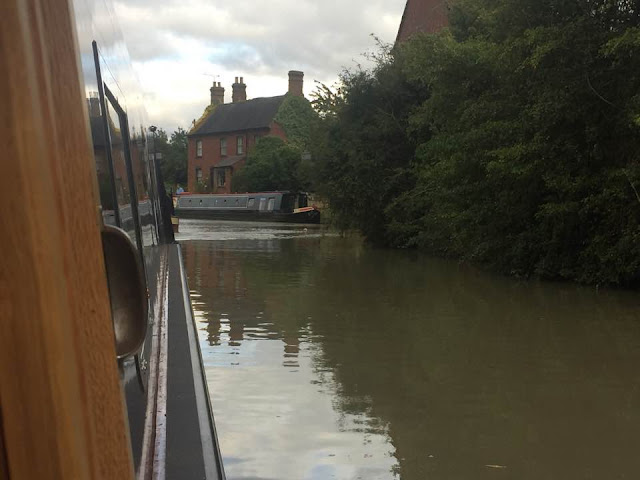 The guy in the picture above made it without any trouble but the next picture shows a boat that didn’t and he ended up on the silt.  When this happens, the crew pole the boat off but I didn’t really feel it appropriate to take pictures of that happening. 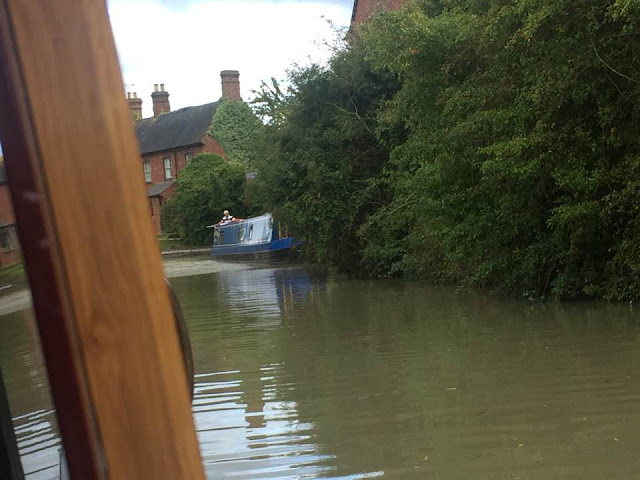 I'm not sure what to do today as, contrary to the forecast, it is pouring with rain outside.
Email ThisBlogThis!Share to TwitterShare to FacebookShare to Pinterest