Having gone to bed on Saturday in total stillness and fairly warm air, Sunday dawned windy, grey and drizzly.  We had to get to Marston Doles for logistical reasons – the car was parked about ¾ mile away across the fields so not ideal for Karen going to work.  We knew that at Marston Doles we could get easy access to the road and also there’s a water point there.  The only drawback being that there’s only room for three boats and as it’s a popular spot for continuous cruisers there are hardly ever any spaces.  We struck lucky and got the last spot; even luckier, we got the spot closest to the water point so we could fill up with water without moving from the mooring!  It means I can get those awkward things like towels and bed linen washed without worrying about water, so Monday will be a day of chores.

It was the first day we had had to wear wet weather gear for a while but the rain didn’t last all day as forecast.  In fact, when we walked back to Priors Hardwick to get the car it remained dry all the way.

The walk back to get the car was really pleasant and we managed to find a route across fields and avoided roads until the last ¼ mile.  Neither of us are into horses but we spent a happy few minutes watching a group in one field we walked through.  They were all sizes – a mixture of Shetland, children’s’ riding ponies and adult riding horses.  They kept trotting to different parts of the field interspersed with a canter to another.  They seemed so happy playing together.

At one point we passed what seems to be an abandoned house – surely, no one lives here? 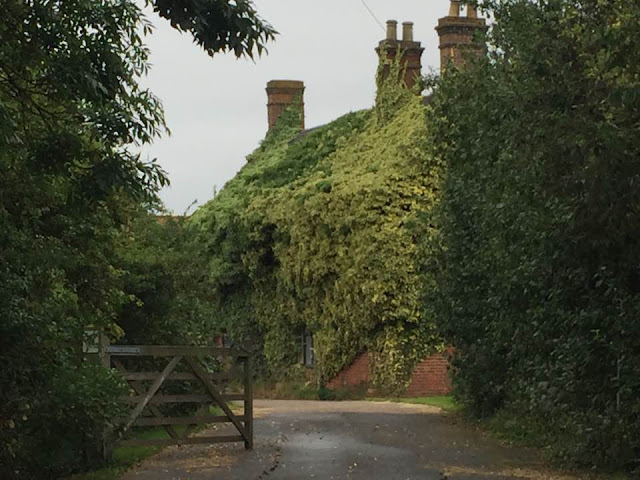 After picking up the car we decided to pop down to the Folly at Napton for a Sunday afternoon drink.   Mark, the landlord, is quite a character and comes into his own on Sunday afternoons, entertaining the children with stories and the adults with card tricks.  We have seen him in the evenings regaling customers with music hall songs too.

Here, at Marston Doles, we are at the top of the nine lock Napton flight and therefore the northern end of the long summit pound.  I mentioned a couple of entries ago about the reservoirs that feed the pound but here, a stream is pumped up just above the top lock to help keep the summit in water.  Originally a steam pump used to pump the water up but it has since been replaced by an electric pump.

The old steam engine building is at the end of an arm called the Old Engine House Arm not far from here so I hope to explore it during the week.  We will stay here until Karen can help me down the locks as my back still wouldn’t be up for single handing.  She may be able to get home early on Wednesday so if the weather is nice we could have an evening cruise down the flight.

Whilst writing this entry I have received a message from Karen, one of the guys on her team had parked next to her last night.  I may have mentioned Alan before but his girlfriend lives on her boat and cruises around the country and when she is in this general area Alan stays with her.  Last summer, when moored at Flecknoe, Karen was walking along the tow path to get to the car one morning when Alan stepped off his girlfriend’s boat to go and get his car.  They were both as surprised as each other as neither expected to see anyone else before six in the morning let alone a work colleague 😊