It feels like those two weeks have flown by since the last blog update but thinking about it, it would probably have felt the same if it had been two days, two weeks or even two months ago.

At least we now know how the first phase of deconfinement is planned to work in our area of France.  We are in the Marne départment which is designated as a red area based on the rate of infection and hospital capacity.  Although there have been very few cases in our town, our départment is red because its hospitals are being used for patients from the hard hit areas of Paris and Strasbourg, the two cities that we are between. This means that, although we don’t need a signed form to go out anymore, we still have more restrictions than those in the green areas.  We can now go out more than once a day and some shops are allowed to reopen but parks and public places are still closed.

From a selfish point of view, the canals in the red areas are remaining closed to non-commercial traffic to at least the end of June even though the current plan is that those in green areas will reopen at the end of May.  The next review is at the beginning of June, so we will stay put to see what happens next.

While on lockdown I’ll mention some welcome and generous news we received from Eurotunnel this week.  We hold an annual frequent traveller account and had four single trips remaining before the current year runs out in June.  We obviously couldn’t use these trips and thought we may well lose them, but Eurotunnel have decided to extend all frequent traveller accounts by 12 months, so we have a year to use those four trips. Clearly, we are pleased with this result and think it’s a brilliant offer.

I went shopping for the first time as we needed to replace an empty gas bottle and we didn’t want to approach the point where the second gas bottle started running out.   As in the UK, many fuel stations sell gas, but only unmanned fuel stations are open at the moment.  This means that gas is only available at fuel stations where the safety cages are set up for self-operation by use of a credit card.  With none of these available locally I set off for the garden centre down the road.  For some reason, this outlet has been able to remain open during the lockdown, maybe because it also sells gas?  Anyway, the point of the story is that I felt most apprehensive about the whole experience and now understand why Karen feels anxious before she goes food shopping every ten days.

Amongst getting with our other jobs, Karen has continued to make face masks and I have carried on with painting when the metalwork isn’t too hot.  Unbeknownst to me Karen took a photo when I was painting the gunwales and it turned out to be a sort of upside-down picture. 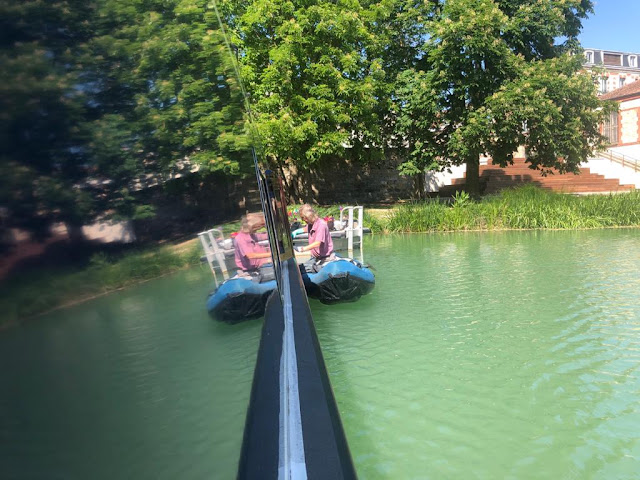 By the way, the steps in the background are nearly complete and are now ready to be opened when lockdown finally finishes.  The project to build the steps was started just before we arrived here at the end of October and they were due to be opened by now but this has been delayed because of the lockdown.  As the steps lead down into the park they are closed off at the top until parks are reopened and we are going to find it a bit strange when that happens as people start using them to sit on.

Our daily walk has continued and one of the tasks on the route is to check on the swans nesting at the far side of the port.  Even though ducklings and goslings have been around for some time now, it seems that the cygnets have taken forever to hatch from their eggs.  We were finally rewarded yesterday, and three cygnets were in evidence leaving three eggs unhatched.  To be fair, Gorete had seen the first cygnet arrive two days previously but it was under the incubating parent whenever we checked on it. 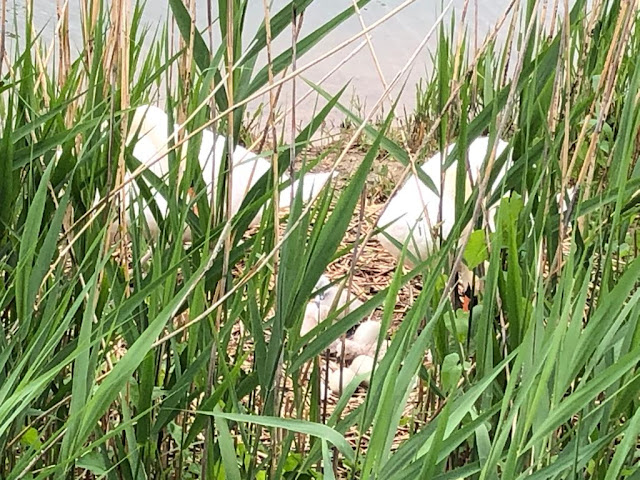 We haven’t seen any further new species of butterfly for the year and there really hasn’t been much to report on the natural history front other than finding a single orchid down by the River Marne that we believe is a common spotted orchid.  The reason we are not 100% sure is because the leaves, that are normally covered in black spots, are completely devoid of them..

The clear nights have meant the views of the much talked about full flower moon have been spectacular.  Of course, smartphone pictures won’t do it justice, but they will serve to remind us of those early May evenings stuck in the port at Châlons en Champagne. 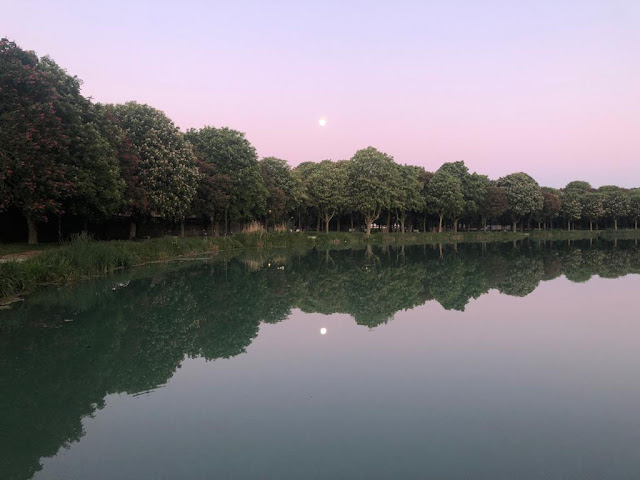 Two years ago, we had a petunia that threw both pink and purple flowers.  We particularly remember this because some people (e.g. Yanos 😉) wouldn’t believe us and swore we had photoshopped the picture.  To our surprise one of this year’s plants is doing exactly the same thing:

VE Day is an annual public holiday in France but is generally a subdued occasion, especially in the north where the French remember the occupation rather than the celebration of the victory.  Nikki & Gorete had some suitable red, white and blue bunting so we put that up around our end of the pontoon.  Karen baked some scones and we celebrated in British style with jam and cream although, rather than pots of tea, we opened the rosé. 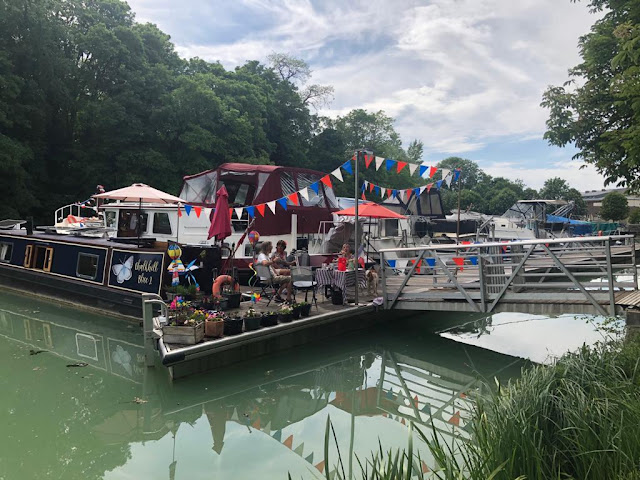 As with many people, not much excitement has happened over the last few weeks but Gorete gave us a lovely surprise one day.  We have managed to continue life as a family doing all the usual stuff like morning coffee, afternoon tea and homemade cake, evening drinks on the pontoon or trips to each other’s boat for dinner etc.  Fortunately (so far 😉) we have all coped admirably with each other’s company and living so close together – just as well really when you think about it.  Anyway, having talked to the girls one evening about our quest to find the decorated manhole covers in town, Gorete did some research and got further than we did – she found an old article in the local paper explaining how and why they appeared.  If you open it in a browser with an inbuilt translator like Chrome then you can read it in English – click here for the article.

As our boat pictures are always taken from our end of the port, here is one taken from the other end. 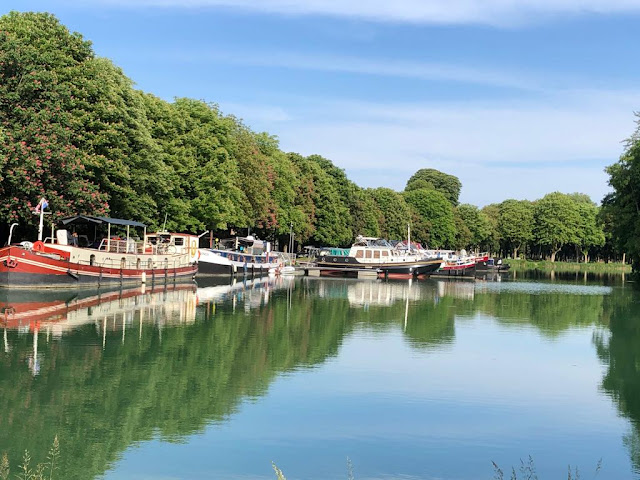 Daily video calls with Lauren & Lewis have continued so we can keep up to date with Ellis who gives us plenty to smile about. 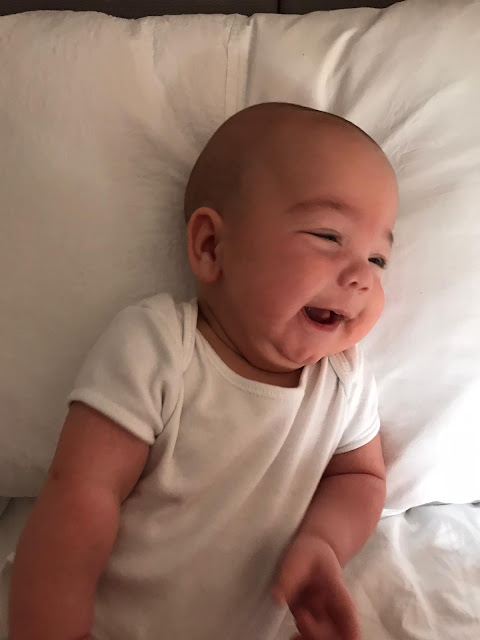 Hopefully, it will only be a few weeks before we can work out whether or not we’ll be cruising this year (and start having more varied blog content 😉).