The sunny weather has continued for another week and, with no rain, we are watering the plants daily.  This is a welcome chore as it gives us one more thing to do each day during our lockdown which is now in its sixth week.  Ironically we do find that time seems to fly by and, although we are up by 7.30 at the latest each day, it seems we have only just finished breakfast and mid-morning coffee break before we realise it is practically lunchtime. In a similar vein, it is often nine at night before we sit down and relax for the evening.

There are plenty of butterflies around including what seems like more Holly Blues than usual.  One took an unusual liking to Buddy the other day.  He had just finished cooling down by standing in the River Marne when one was attracted to the drying mud on Buddy’s back.  This behaviour by butterflies is often seen as they imbibe moisture/minerals from the edges of puddles and, less attractively, from fox poo.

Whenever Karen returns from her walk, she always has something to report.  I suppose that with each day being the same, anything away from the norm tends to stick out.  For example, Wednesday’s highlight was seeing a breakdown truck with a car on its flatbed.  Nothing unusual in that she thought, until she noticed the car driver who, rather than being seated next to the truck driver, was still sitting in his car on the back.

The next day she was stopped by a gendarme and had to show her attestation and ID.  She was told she was in a forbidden area and was asked to leave it.  She knew it was forbidden as it was a public park but had only gone a dozen feet or so into it to dispose of a poo bag in the requisite receptacle.  As she was stopped after making the deposit, she found it difficult to describe what she had been doing as we have never learnt the French to describe what she had just done!

I know there has been a lot of talk about the increased use of group video calls for family and friends during the lockdowns and we have been doing exactly that with our children.  During the week we had our first ‘friends’ session which turned out to be good fun – talking with fellow boaters, Chris & Sue Hutchins and Mike & Lesley Fielding in the UK.  One of the questions that came up for us was, ‘How is your French coming on?’. This brought home to us that we are not talking French at all this year as we are not able to meet people.  At the most, we do supermarket French: ‘No we don’t have a store card’ and ‘Yes, we will pay by card’.  This is almost less than tourist French when all you need to know is how to order drinks in a bar 😉

It seems likely that the general public will have to wear face masks when the restrictions start being lifted over here so Karen took an hour or so out to make a couple of masks.  The other reason for making them is that we would want to wear a mask if we catch the virus.

The good weather has meant that I have had no excuse but to carry on with the boat paintwork prep, although I haven’t found it too strenuous as it has to stop before lunch as the steel boat becomes too hot to touch on the outside by then.  A new excuse has arisen over the last couple of days though: the wind.  It really has been too breezy to risk paint specks appearing on the girls’ boat next door.  We remember someone painting next to us on the towpath in the UK a few years ago and realised a few days later that we had specks over our boat which could only have come from our neighbours.

I mentioned last week that we had been watching up to ten herons fishing at once along the waterfront next to our mooring.  This only lasted for three days and we are now lucky to see more than three or four at a time.  We have no idea why the numbers have gone down, is it the wind direction, the clarity or otherwise of the water or what?  What we have seen though, are two more dead deer, one on the towpath and one in the cut itself.  They were both too far gone to see if they had been shot or not.

When anyone in the port goes shopping, they always ask on the port WhatsUp group if anyone else needs anything.  This is very useful if you suddenly realise that, due to a miscalculation, you have run short of something as it saves risking meeting people during an unwanted trip to a shop.  When Jan asked the group on one day, Karen responded saying she wanted some epinard (spinach) but something went wrong in the message delivery as Jan came back with blettes (chard): 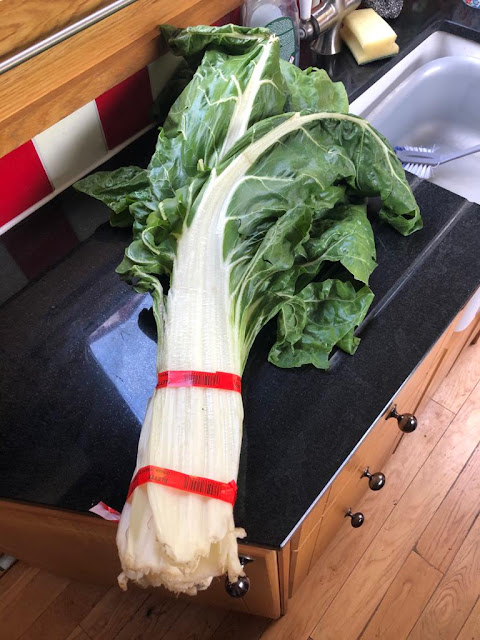 It did allow Karen to keep to her, ‘One new recipe a week’ notion she is following during the lockdown.  That evening we had a delicious chard, lemon and cheese pie: 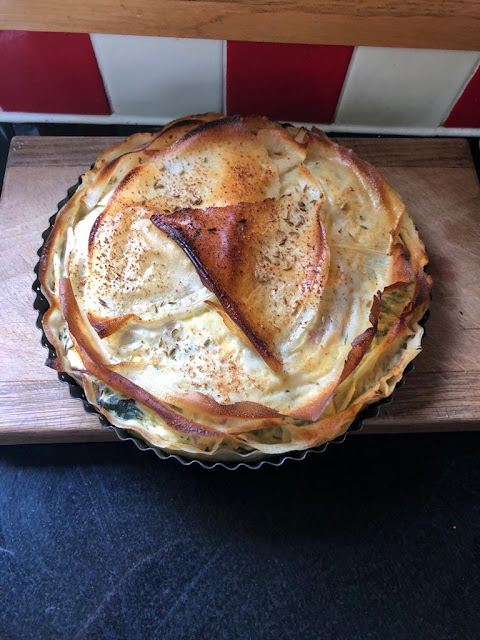 Another thing mentioned last week was that we had both found an Orange Tip butterfly egg apiece.  We have been checking them every day but, sadly, on Sunday they had both disappeared.  They seemed to have completely gone as we couldn’t even find caterpillars that may have hatched.  As a sort of compensation, whilst continuing the search, Karen found a batch of Large White eggs on a nearby plant.

Our plants have started flowering, especially the petunias, and Gorete has made the pots even more colourful with the addition of some windmills.  The nasturtium and sweet pea seedlings are coming on well and we are getting close to having to pot them on.


We celebrated the end of another week of lockdown by sharing a meal with the girls on Monday evening, during which we realised that our weekends have extended to include Mondays 😊

Now it’s time say goodbye until the same time next week.
Email ThisBlogThis!Share to TwitterShare to FacebookShare to Pinterest