Esbly (moored off the main drag)

For a couple that don’t particularly like travelling on rivers we are going over the top on the Marne.  We are travelling the whole navigable length of 178 kilometres from the junction with the Seine until we get onto the Canal lateral à la Marne at a place called Dizy.  There are a further five kilometres of river navigable down to Épernay from Dizy so we may well bite the bullet and go up and down that stretch too.

I said in the last entry that we were hoping for rain on Saturday night and it certainly came; just before 11pm it started hammering on the roof but, unfortunately, only lasted about five minutes.  Mind you that was long enough to soak the floors where the doors, windows and hatches were open but covered by our home-made mosquito netting.

We awoke on Sunday to the sound of rowers on the river and we felt we had been transported back to the River Avon at Stratford which is particularly busy with rowers on Sunday mornings.  We remembered spending many a happy morning laying in bed in Stratford listening to the sound of oars splashing, crews chatting and coaches and coxes calling. 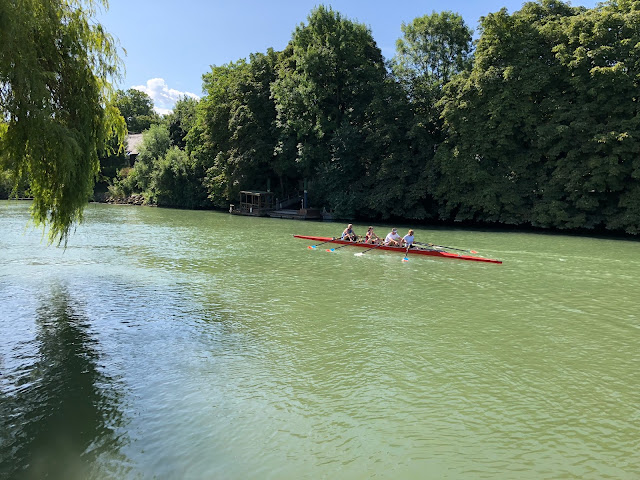 I forgot to mention the selling ploy that we have seen used by some French patisseries.  I was reminded of this when we walked past one such shop in Perreux yesterday.

Our plan for Sunday was to cruise to Lagny-sur-Marne as we knew water was available there so we could stop and do all our washing.  Apart from the rowers it was quiet on the river and when I radioed the first lock, I was surprised to hear that we would have to wait and let a commercial in first.  Sure enough, I looked behind and could just see the front of a commercial coming around the corner.

Even if we shared the lock, we still have to let the commercial go in first, so I slowed down and we exchanged the standard waves as he went past us.

He was only 40 metres long so with 125-metre-long locks at this end of the Marne I knew we would get in behind him.  As he went in, I started to get concerned as it looked like he was only just going to fit.  Now, my conversation with the éclusier had been fine and I had even understood that another boat was coming, and we would have to let him go first.  What I didn’t realise was the Marne guidebook was yet again misleading and the locks from here up to the far end of the river are only 45 metres long.  The éclusier must have thought I was loopy radioing him to check that I should go in behind the commercial!

As luck would have it, we had to wait for a hotel boat to come down after the commercial had gone up.  I was getting concerned that another commercial may come up behind us while we were waiting.  We have to let them go first as they obviously have priority.  As it was Sunday, we were lucky and no other boat came behind us and Raymonde was soon coming out of the lock.

It was a 4.4-metre-deep lock, so we approached the ascending procedure with some trepidation especially with the number of gongoozlers watching us.  We needn’t have worried as we encountered no problems and even the éclusier radioed and wished us a good journey 😊

Talking of being thought of as potentially loopy reminds me that the River Marne is also very loopy.  There are several large loops that are shortened by manmade cuts and the lock above was at one end of one of these cuts. All the cuts are named and this particular one is called Canal de Chelles and it ends up meeting the Marne again at a place called Vaires-sur-Marne.

In the end we never made it to Lagny-sur-Marne as we found an empty 10-metre pontoon before we reached the final lock on the cut.  It looked like it would be nice and shady, so we moored up for the day.  Looking at satellite images it seemed the moorings at Lagny would be in full sun all day which we would want to avoid anyway.

After lunch we went for a walk around the area and found the riverbanks full of French families barbequing their Sunday lunches.

On the opposite bank were a dozen or so liveaboard péniches.  We have got used to the different approach the French have to living aboard compared with the Brits.  They tend not to continuously cruise like many of us do and they have massive (to us) boats around 40 metres long that are permanently moored and have their own water, electricity and mail supplies.

Walking past the boats later we saw the same features that are exhibited by UK permanent moorers, ranging from impeccable gardens and boats down to hulls that have been stripped bare and are clearly taking years longer to renovate than planned.   The largest we have been on was about 30 metres long and that was enormous, so goodness knows what these ones were like.

It goes without saying that, as in the UK, every boater we met on our walk was really friendly and it didn’t matter whether they had what looked like a palace or not as each of us lives in what we call 'home’.

On Sunday we ended up only cruising 14 kilometres up one lock.

We were lying in bed on Monday morning listening to the bird song which became drowned out by the sound of the engine of an approaching commercial.  As we were on a floating pontoon there was a lot of movement up and down and creaking and screeching of rollers, but it soon settled down again.  I suddenly realised though that I could see different trees to the ones I was looking at before the boat came past.  I shot out of bed and saw that the front end was adrift, and we were almost perpendicular to the bank.

We threw on some clothes to be decent and rushed out to sort things out.  A mooring cleat had come away from the pontoon, but we were still tied at the back end. We got hold of the centre line and pulled the boat in and, with only one working cleat, had to tie to the handrail of the steps down to the pontoon.  It seemed to hold as other boats passed OK.

Monday promised to be in the high thirties and it certainly didn’t disappoint.  There was also no breeze, not even on the river which was unusual.

After our first lock we were soon heading through Lagny-sur-Marne where we were originally planning on getting to on Sunday.  When we were thinking of going there, we had been concerned that there may not have been space.  All the pictures we have seen of other boaters there seem to show the moorings chock-a-block. As it was, we needn’t have worried: not a single boat was moored in Lagny.

When we reached Chalifert we came across another issue with our Marne guidebook.  This was the third irritating issue we have come across so far and we can’t say we have found anything irritatingly wrong in the guidebooks we have used on the other parts of France.  At Chalifert we were leaving the Marne river to join one of the several cuts that cut off large loops in the river.  The guidebook indicated that we were going through a lock as we joined the cut and that we would be going down it which was odd as we are heading upstream.

We had noticed this anomaly a couple of days ago when we were route planning for the week and had thought it was really strange.  We just couldn’t get our heads around it and came up with all sorts of reasons.  My main concern was what to say when I radioed ahead – should I say we are avalant (going downstream) or montant (going upstream).  In the end I didn’t say either word as they would know where we were coming from as there is a tunnel at the far side of the lock.  If we had been coming in the opposite direction, then I would have had to call the same command post to get entry to the tunnel before reaching the lock.

The éclusier was really friendly and as we drove into the lock he even radioed through, 'Bienvenue à mon écluse!'


As soon as we were out of the tunnel, we were approaching the next lock.  Although this one had the usual control building, the original lock cottage was still standing.  It seemed rather incongruous as the TGV Nord viaduct towered above it.

We were going under the road bridge at Esbly when we heard tooting from a car.  As you have probably realised, tooting at us is very common and we just gave a wave in return.  I then saw the guy had practically stopped and was waving frantically out of his window as well as still tooting.  It was then that I realised it was Didier, one of the Mairie de Paris escorts we had when we were told to turn around and leave the Canal de l’Ourcq because the levels were too low.  In a way it wasn’t surprising that it was him as, in places, the Canal de l’Ourcq runs very close to the River Marne and we were only about 10km from where we had last seen him.

At Esbly the unnavigable Canal lateral au Grand-Morin heads off to the south.  This used to link up with other waterways but is no longer managed and is full of fallen trees.  It is still used as a feeder to the cut we were on, so I assume any large blockages are removed.

As we went past the entrance, we noticed a short pontoon a little way down and, as it was in the shade and looked like it would be all afternoon and evening, we decided to try and moor up there.  It didn’t take long to pull up and reverse down to the pontoon where we were soon nice and secure.  At least we were away from the main channel so any passing commercials shouldn’t affect us like they had in the morning 😉

After lunch we did our usual thing of having a walk around the town.  As it was so hot, we didn’t walk for too long and Buddy didn’t seem too bothered either.  He was just happy standing in the canal whenever we found shallow bits for him.  As usual, the Mairie gardens were extremely well looked after and obviously well-watered.  They also seemed to be following the recent theme we have noticed of having an insectivorium, this one was constructed by local children.

We did see something strange during the afternoon.  We thought we heard a commercial coming but when we looked out, we thought it was a type of dredger.  Watching closely, we realised that the mechanical shovel was being used to move the craft along the canal.

On Monday we cruised 15 kilometres up three locks.