Two commercials who had moored overnight just down from us left at about six in the morning and then all was relatively quiet with only a few more passing until we got underway at about nine.  It was going to be yet another day in the 30s, so we wanted to get moored up before lunch to avoid cruising in the heat of the day.

We both think that it’s brilliant that it pays to transport so much cargo by river and canal over here.  I said yesterday that most of the cargo in this area seems to be sand and gravel but before we left, we saw fuel, containers and wastepaper being carried.

We were heading for a lock mooring for our penultimate night on the Seine before reaching Paris and had a really pleasant cruise without any mishaps or near mishaps for once.

We love the way the French shape their trees, this village had cuboid shaped trees along the riverside.

We had the first lock to ourselves and hoped we hadn’t held up the three commercials who were itching to get in as we left.

When we radioed ahead for the second lock, we were told we would have to wait as boats were coming up and also that we should let a commercial go in front of us.  At least that’s what we think we had been told!  It turned out to be correct and as we were waiting, we heard the deep throb of a big boat coming up behind us and then followed it in.

After going through the second lock we took it slowly as we wanted to check out the possibility of mooring at the lower lock landing.  We were in luck, there was a very long lock landing and there were bollards that we could reach.  With such a length available it would mean we shouldn’t get in the way of any commercials mooring overnight.  Coupled with that it was Saturday so the traffic was lighter anyway so less of a chance we would have neighbours 😉

After lunch and a rest, we went for a slow walk to have a look at the lock we had come through and to find a way over to the other side as we could see places where Buddy could get into the river.

Karen had been wondering how wide the river is where we are so when we walked across the bridge over the lock and the river, she counted her steps and made it about 180 metres, the same length as the lock.

Each of the locks we are going through to get to Paris have secondary, smaller locks next to them.  These secondary locks are the originals and were built with lock cottages as on the canals.  We have seen a couple of these cottages, but it seems that some have been demolished.  The secondary locks are occasionally used in busy times, but the secondary lock here clearly isn’t as it looks quite derelict now.

We walked down the other side of the river to where we were moored and let Buddy spend a lot of time just standing in the water to cool down.

This picture shows the length of the lock landing and to put it in perspective we are the little black dot at the far end:

On our way back we found the largest and longest stanking planks we have ever seen.  These ones are 17 metres wide and are used to create a dam in front of the lock gates during times of maintenance.

We didn’t do a lot else on Saturday other than watch the odd boat as they passed us.  We are also positioned at the end of a water skiing straight so we had fun watching the skiers practising with some falling off each time they turned next to the boat.

There was a river cruiser built in the style of the old Deep South paddle steamers that was running trips from a nearby town.  It too was at the end of its run outside our boat and was turning around next to us every hour or so.  Many of the guests were waving and taking pictures of us so we imagined an advertising board on the quay at the other end of the its journey chalked up with: ‘Join us on a trip to see the mad English roasting alive on a narrowboat!’

The forecast for Paris over the next week is cooler, down to the mid-20s, which is good news.

On Saturday we cruised 20 kilometres down two locks.


When we went to bed on Saturday night some loud music started on the opposite side to the river.  It appeared to be some sort of outside rave party that didn’t finish, and therefore kept us awake, until 3.30 in the morning.  We couldn’t get to sleep because the music was so loud, but the strange thing was that the music wasn’t bad and sounded like it had a really good dance beat.  If you know us, then you will know this is a strange thing to say as we can only dance in our minds 😉

We woke up later than usual on Sunday because of the music and consequently left later than usual.  We were now reaching the suburbs of Paris and places were becoming more commercial and industrial.

We were also expecting to come across more weekend leisure cruisers as you would on rivers like the Thames as it was a Sunday but were surprised to find, that apart from the odd commercial, we had the river and locks to ourselves.  We did pass the pseudo paddle steamer on its first trip of the day though.

We could feel we were approaching a city as graffiti was becoming evident on bridges and quayside walls.  Especially spoiled were these old bathing changing rooms still standing by the riverside. 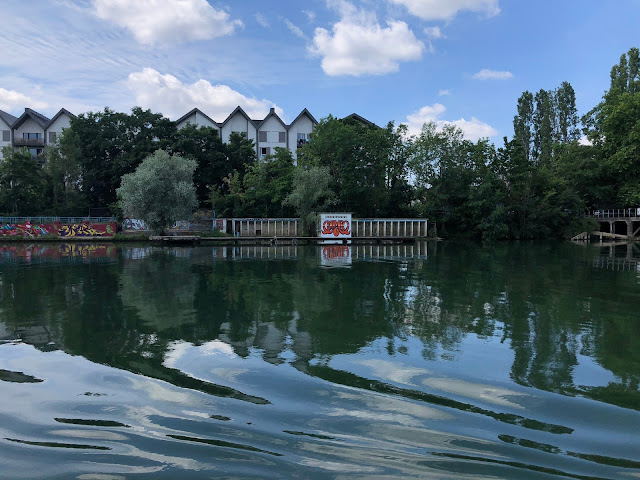 When I radioed the first lock, I was told that we would have to wait for another pleasure boat, so we were really surprised that once we were in the lock, the gates closed and we were going down.  Maybe it was another misunderstanding as when we were going down, we noticed a trip boat coming up the secondary lock.  Maybe we had got to the lock quicker than expected and the éclusier let us down on our own as a commercial was waiting to come up – we will never know.

When we neared the second lock, we looked for a 20-metre pontoon that Karen had read about.  This would be ideal to moor up on for the rest of the day.  It was fairly close to the lock so I was a little concerned that the éclusiers would wonder if we were coming down the lock or not, especially as I hadn’t radioed ahead.  Anyway, we found the pontoon and luckily it was empty, so I made to moor up

As I was getting in position Karen asked me if I was going to turn around first (on rivers you always moor facing upstream and tie up the front first).  With worrying about giving mixed signals to the éclusiers I had forgotten about turning around but breathed a sigh of relief as, by carrying out the manoeuvre, it would be obvious that we weren’t intending to come down the lock.

After a lunch in the welcome shade we went for walk but found we couldn’t get off the lock landing; all the gates were locked!  We didn’t mind as we were happy just to spend the rest of the day on the boat, especially as it was Karen’s birthday and we had some champagne in the fridge 😉 We then realised that Karen wouldn’t be able to have a run in the morning so we decided to go have a look at alternative mooring spots.

After checking, we found that if we went through the lock the last decent place to moor up before Paris was just the other side of the lock, so off we went.  I radioed the éclusier and was told to head for the lock on the right,

The lock we went down was the smaller of the two locks and it was unusual as it  only had one gate at each end.

We were soon moored up again in yet another spot where we were all on our own.  It seemed to be at the end of the runway at Paris-Orly airport and we noticed that planes were taking off every few minutes.  Our guidebook clearly hadn’t been updated for a while as it mentioned that it wasn’t a busy airport and there was just the odd plane taking off or landing!

During the afternoon quite a few clouds rolled in and also some breeze and it made for a lovely change to sit outside drinking our champagne in weather that felt cooler.

When entering up the boat log for Sunday and checking the journey for Monday I found that we had yet another lock to go down before hitting the centre of Paris.  It was odd that neither of us had spotted this on the numerous times we must have looked at the map.  We knew we would have to go up a lock to get off the river and into the basin at Arsenal but had completely missed this final lock which, ironically, is called Écluse d’Anglais!

On Sunday we cruised 20 kilometres down two locks.