The temperature was due to be in the 30s on Monday, so we wanted to get to a mooring that provided shade, especially for the evening.  The only place we knew was at Ècriennes which we weren’t able to use on the way up as a boat was already there. We assumed it would be free on Monday as we now believed we’re the last boat trying to get off the northern end of the canal before it closes.

We had quite a long way to travel, for us, so we set out early from Hallignicourt.  Karen and Buddy walked for the first couple of locks and I was just behind them before we reached the second lock when a deer crashed out of the woods next to them.  My initial thought was that Buddy had flushed it out but then saw he and Karen were just ahead of it.  The deer leapt into the water just in front of the boat, quickly swam across and jumped out the other side.  When we’re driving our car and a deer runs across the road we always slow down because of the likelihood others would be following.  I was prepared for the same on the boat but no more appeared.

While Karen was walking in front, I saw her beating back some undergrowth and wondered what she was doing.  I knew she wouldn’t be trying to get a look at a butterfly as she wouldn’t have been making a disturbance. I found out later that she’d found a distance marker that we’d missed on the way up.  It had fallen over and become overgrown so it wasn’t surprising we'd missed it.

It was a pretty uneventful journey until we reached the penultimate lock, other than we saw more kingfishers than we have for a while, oh and the deer and the kilometre stone.  It was showing two red lights, meaning it was out of service.  So, it was on the phone to the control centre yet again and the girl recognised our number so knew who we were.  Although an éclusier turned up very quickly it took about 45 minutes before we got going again because he had to go and get a part from a hut at another lock. When we finally arrived at the mooring it was both empty and under the trees as we remembered.

After a late lunch we walked into Matignicourt-Goncourt which was a lot smaller than expected but still boasted a large mairie.  Approaching a bridge over a stream it looked like the bank was lined with an old washing stone.  When we got closer, we realised it was a series of separate blocks of stone probably used to prevent damage when the flow was heavy rather than somewhere for the village women to have done their washing 100 years ago or so. 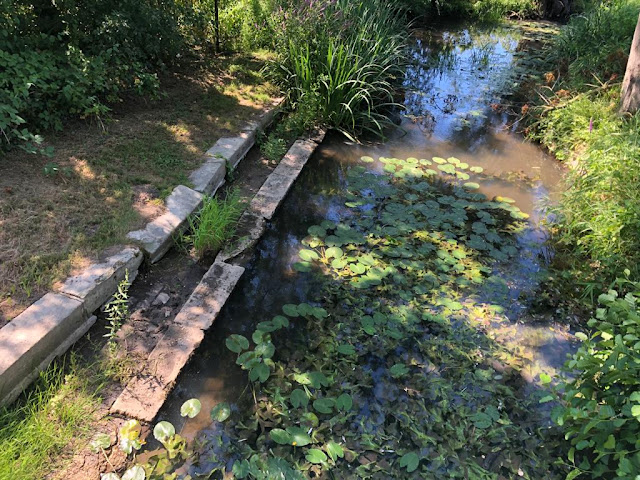 The news about Brits holidaying in Spain having to quarantine from today did make us feel like the government is in a bit of a cleft stick.  If they had given notice of, say two weeks, then they would have been criticised for not acting quickly enough.  Likewise, they will probably be criticised for imposing the quarantine immediately and not giving people notice.  By the same token, we can’t feel sorry for anyone complaining that they have been caught in the situation as the risks are going to be there for a long time to come.

Before anyone says anything, we know we're abroad, but we're not on holiday and we've been here through lockdown.  We're hoping to pop back to the UK in a couple of weeks but are well aware that we may have to cancel the trip.  It’s a risk we’re prepared to take especially as we're self-isolating by living on a boat, don’t mix with people and Karen socially distances when shopping for food.  Anyway, that was a rare stray into politics that I normally avoid so I’ll end Monday by saying we cruised 10 miles down seven locks.

The latest situation report for the canals in our current area in north eastern France makes grim reading.  It certainly looks like we will have to head to a different region to the one we originally planned.

The vertical red line in the middle on the left is the canal we are currently on.  With the orange indicating that the waterway is too shallow for commercials it'd be foolish to attempt those waterways because, with very little rain likely for the rest of the summer, things will probably get worse and more of the orange will turn red.  Clearly, we need to assess the situation carefully over the next couple of weeks to decide where to head next.

We had to get off the ‘entre’ (Canal entre Champagne et Bourgogne) on Tuesday as it was closing at the end of the day because of lack of water.  We set off soon after breakfast and it didn’t seem long before we were at the final lock and handing in the télécommande we used for operating the locks.  The goodbye sign at the lock showed the canal is 224km long.  Last year we manged to get 30km along to St-Dizier before turning around due to water shortages.  This year we managed to do more than double that, well 62km, to Joinville, before we had to turn around.  Will we get the whole way next time?

Our plan was to turn left back onto the Canal latéral à la Marne and head very slowly back to Châlons-en-Champagne where Matthew was going to meet us for a couple of days from next Sunday.  Before we got to the junction, the engine started labouring entailing a quick trip to the weed hatch.  While I was down there Karen suggested we turn the other way at the junction and head east along the Canal de la Marne au Rhin for a couple of days and then turn back to head for Châlons at a quick pace by the weekend.

This was essentially a good idea as it would mean travelling along a new canal for us, but we needed to be sure it was open.  This meant checking information on the VNF site and, as it was lunchtime, we turned left to pull up at a mooring spot we knew was just past the junction.  We knew we turned in the wrong direction, but the canal was wide enough to turn around if we ended up following Karen’s idea.  Coincidentally an email arrived after we moored saying the Marne au Rhin was closing from 30km upstream which, fortunately for us, was further than we would get in a day or two,  This decided it for us and we thought we would stay at the mooring, spin around in the morning and head for pastures new.

Whilst eating lunch we could hear the odd firecracker and air rifle shot.  This was a bit disconcerting as it was coming from a group of people not far away on the other side of the canal.  To be honest we had always thought it was a rough looking part of town which is why we had never stopped there before,  When firework rockets started being aimed across the canal at the houses opposite we decided enough was enough.  So I carried on out of town to moor below the first lock, where we knew it was nice and peaceful, while Karen popped to the supermarket.  After I'd dropped down the lock and moored up, Buddy and I walked back to meet Karen.

When we got back to the boat Karen put the kettle on for a cuppa and found the gas had gone.  This was a bit odd as normally one of us has to clamber out to the front where the gas locker is situated in either pouring rain, icy conditions or when it’s pitch black or any combination thereof.  With it being daylight and dry it took no time at all to change the gas for once 😊

On Tuesday we cruised eight miles down five locks.