We awoke to rain on the Tuesday of the seventh week of the French lockdown; apart from a spattering one night over the previous weekend this was the first rain for almost seven weeks.  This made us think of the irony of being allowed to start cruising in June when the lockdown restrictions commence easing, only to find out that if the dry weather continues there would be the danger of not being able to cruise because of low water levels 😆

Even though the weather has been glorious there has been a breeze most days, so we have had very few upside-down days since returning to Châlons at the beginning of March.  As it has been so warm we are able to leave the hatches open until nightfall and take advantage of the views during the evening.  Last Sunday was one of the stiller days and Karen managed to capture this from the open hatch:

Sunday evening also saw the arrival of three terns that we believe were Common Terns although we’re not proficient enough birders to be sure.  We watched them diving for fish in a manner that Karen described as being akin to a plane crash landing.  For a bird that is so sleek and graceful, their entry into the water is completely the opposite; however, they seem to always come up with a fish, so the method seems to work.  The herons are still to be seen fishing but only a handful at a time at most.  Gorete managed to see the heads of young in one of the nests through her binoculars, but we haven’t been so lucky.  The rapid covering of leaves on the tree canopy hasn’t helped.

Ardon has been spending some of her spare time painting one of the bollards outside her & Guy’s boat.  The bollard now looks like a large toadstool and she has also painted the names of the five boats and their owners who are currently locked down in the port with us. 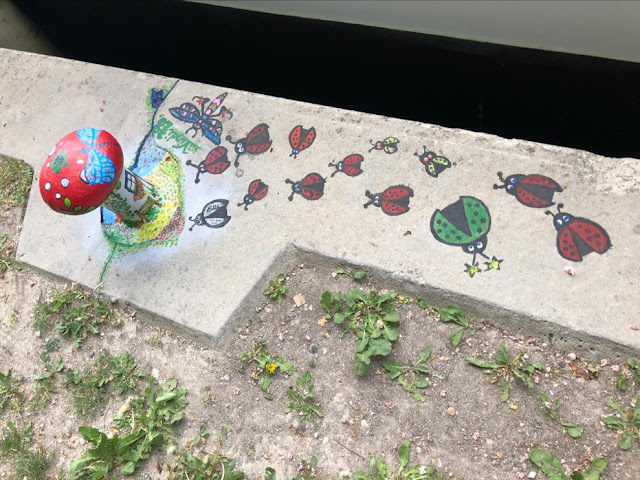 Our daily walk takes us past a house with a pretty garden and this week the owners have been cutting their blooms and placing different ones outside each day for passers-by to take.  Karen has taken orange blossom and lilac sprays for table decorations on the pontoon.

The essence of the poem is that without joy in your life you will lose strength and a house without flowers is a sad house so please help yourself.

Boat painting has had to continue as I have been finding it harder to have excuses not to do it.  I have now repainted the two roof panels at the front and started preparing the middle two panels.

The next areas to finish are the sides under the gunwales which have been prepped up to the last coat of undercoat.  As with the roof, I have had to use masking tape which wasn’t the easiest task to do considering it had to be done in the kayak.

Believe it or not the crap in the water is an accumulation of pollen and tree blossom that we disperse every day or so by running the engine in gear.

Having the kayak out proved to be useful as a large (dead) deer was slowly drifting towards the boat.  We first noticed it a couple of weeks ago about a kilometre further upstream and it has been gradually moving down towards us.  Each time a commercial goes through the town lock enough water is used to cause a slight flow for a while.  The prevailing wind has been from the east lately and that has also helped to keep things moving.

So, I hopped into the kayak ready to move the deer past the moored boats quickly and hence avoid the stench permeating throughout the boat.  Of course, I had forgotten it had rained during the previous night and into the morning – my bottom half was immediately soaked!  I quickly jumped out and, as Gorete had been watching the antics, she helped me turn it upside down to remove the water.  As with all the dead animals with have had to deal with and help on their way downstream, I was loathe to prod it in case it exploded.  I found the best way to move it was to gently nudge it with the nose of the kayak.  I soon had it on its way towards the lock and paddled back to make the kayak fast beside our boat.

Jane from Lazybones at the other end of the port is keen on embroidery and has been keeping herself busy making things.  She gave us a lovely present of napkins during the week:

One evening we were sitting outside having pre-dinner rosé with the girls when we heard Karen scream, she had popped into the boat to check on the dinner in the oven.  It sounded like she shouted that she had dropped her engagement ring down the sink.  As the sink doesn’t have a u-bend we thought it would be an easy job to flush it out.  Quick thinking Nikki suggested getting a pop sock which I held over the outlet while Karen ran water through but to no avail.  While we were trying to flush it out it transpired that it was an earring not her engagement ring that Karen had dropped so the panic level dropped somewhat.

The next step was to dismantle the outlet pipe which wasn’t as easy as it sounds as whoever put it together had used mastic to seal the joints.  With only one pair of water pump pliers I was getting nowhere so Nikki joined in with hers and we realised that we wouldn’t get it completely apart without damaging the outlet.  As I didn’t have a spare we left the sink out of action until the next day when I decided to clean everything up, apply silicone, tighten the joints back up and wait until I got replacement parts before finishing the job.  As is always the case, both types of silicone had dried up and were unusable.  Nikki lent us hers and that was OK, but the nozzle leaked so I got into far more mess than I usually do.  Anyway, in the end I got everything back together but, of course, when we tried it out later there was a leak so I’m back to square one.

What I didn’t mention was that as far as Karen was concerned it wasn’t a disaster because when I was cleaning the joints before tightening them up, I found the missing earring!  The moral of this story is that jobs not on the job list invariably take longer than those on the list.

To sign off for this week, here are the latest windmills the girls have added to the pontoon garden. 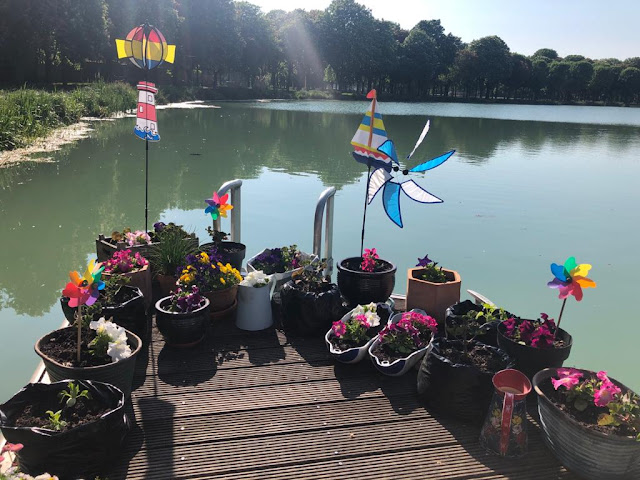