Châlons-en-Champagne (Yet another Brexit impact)

Wednesday was a lovely spring-like day and we spent most of it around the port catching up with all our boater friends who had overwintered there.  It wasn’t all socialising as we had to intersperse it with getting the boat ready for setting off on our next adventure.

Although we had really enjoyed borrowing a boat to live on when we were back in the UK, we were beginning to relax back into to living on our own boat.  We had noticed Buddy seemed happy to be home again too.  As it wasn’t raining for a change, he was able to adopt his favoured position guarding the boat by laying on the pontoon.

The pontoon is nice and secure so we’re able to leave him outside on his own without worrying he will run off.  Bailey, the girls’ dog next door, is the opposite and they have to force him to stay outside.  Mind you he’s a bit happier staying outside if Buddy’s around.

Thursday felt like a total washout: we awoke to rain, it rained all day and it was still raining when we went to bed.  We stayed indoors apart from going out for a couple walks as it was an ideal day to do more of the admin jobs we need to do before leaving Châlons.  One of the things I have been going around in circles about is finding out how to get a boat licence for when we’re cruising in Luxembourg and Germany.  After what felt like a disproportionate number of hours on the web, I finally found that, unlike most other countries, those two don’t require pleasure boaters to buy licences.

We also revisited our cruising plans for the year and decided to keep them the same, at least until we get back into France from Germany.  We will spend the first few weeks getting to Strasbourg and as the route includes a canal that is closed for maintenance for nearly all of March, we won’t be setting out for another two or three weeks.

This will be a journey of 338 kilometre through 167 locks, numerous tunnels and one inclined plane, a device we have never been on before.  We will be travelling on these three canals:

Another thing we ticked off our list was getting the German phrases required when radioing or phoning the lockkeepers when we’re over there.  These were kindly supplied by our daughter Sophie who will also need to make sure we get the pronunciations correct.

Whilst back in the UK we bought a travel cot that’s assembled like a tent.  This makes it very compact and easy to store on a narrowboat.  As it was an indoors day, we thought we ought to check that it would fit on the floor ready for when Lauren brings Ellis out later in the year.

Friday was a much better day and we spent most of it outside including a couple of good walks.  The River Marne continued to be high, so our normal circular walk was still cut off, therefore we found other places to visit.

We found yet more decorated manhole covers, bringing our total to 50!  For more information and to see them all, click on 'Manhole Covers' under MISCELLANY on the right hand side of the blog above the photograph of the male chalkhill blue butterfly.

An island stands in front of our mooring and we noticed several herons flying to it with twigs in their mouths - they were building their nests high up in the trees.  As well as being called a heronry (héronaire in French), a group of herons’ nests is also known as a heron rookery.

In the evening we went to a restaurant in town with six of our neighbours (two Aussies and four Brits).  As expected, part of the time was spent discussing cruising plans for the coming season and also the impending impact on us Brits when the transition period finishes at the end of the year.  From next year we will be treated like non-Europeans and only allowed to spend 90 days a year in France unless (under current rules) we get a long-term visa or, a more permanent solution, a carte de sejour. There is much discussion about it on social media etc., but with no definitive facts yet everything is conjecture.  From what people are saying it seems a lot of Brits will be giving up cruising on the mainland which will probably give rise to a spike in secondhand boats for sale.

We're assuming long-term visas will still be available so will apply when we’re in the UK at the end of the year; however, we will keep a weather eye open for developments.  This means we can steer clear of all the worrying about what might or might not change.  Much the same as our approach to the media hype around coronavirus.

Saturday was another spring-like day, it was also one of the two days a week the market is on in town, so we popped in to pick up some fruit and veg.  On the way we passed a big top that has been erected in the park next to the port.  It was clearly quite old judging by the wrought ironwork and wooden structure around the top.

The big top was being used by an acrobatic dance troupe, consisting of many different nationalities who have come together to put on a show and tour it around Europe.

We finished the day watching the England-Wales game – here’s Lauren, Lewis and Ellis making it clear who they support. 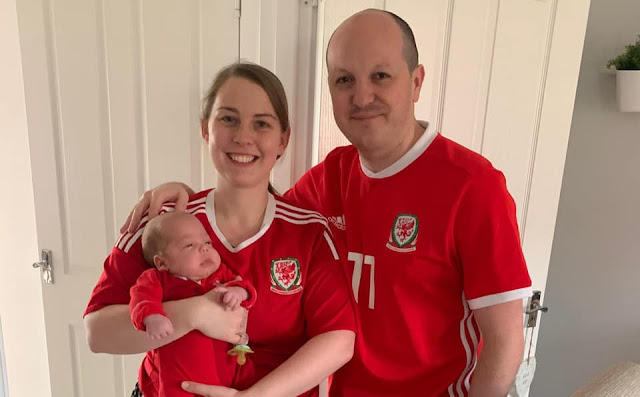