It’s been another week of trains to Reading for Karen and a few car journeys for me and we also finally had a cruise on Ceilidh, having been stationary on the boat for three weeks.  But first a heart-warming story from a day out I had prospecting for Victorian post boxes in the villages around Farnham and Alton.  At a place called Upton Grey I pulled in at the village stores to pick up some baking margarine and happened to notice that the private house next door had an out of service VR box by its back door.

I couldn’t leave without finding out more about the box so knocked on the door to ask if I could take some pictures.  A lovely, older guy answered, and we spent a happy 20 minutes together whilst he explained about the provenance of the box and also the history of the post offices in the village.  Although his house was once a post office, it never housed this box; it was originally located outside the church and then sold at auction where it was relocated to a large private collection on the Isle of Wight.  It was then purchased by the current owner so it could be returned to its original village if not location.  As well as enthusing about his box he was keen to show me where a post box had been when his house was a post office.  He didn’t have his glasses on so could only point out the wall.  Fortunately, I had my glasses on and could see the wall box shape behind a down pipe.

The weather was sunny and frosty so I parked up and went for a walk around a place called Malshangar.  This was a small community built to service a large manor house and it certainly felt like I had stepped back in time.

Having been on Ceilidh for three weeks we were rapidly reaching the bottom of the water tank.  The closest water tap is about 1/3rd mile away down one lock, but it has been out of action for nearly all that time.  I have been ringing CRT every day for a week to check on the progress of repairs and was told each day that the parts were coming in the next day and the contractors would fix it the following day.  It was the same story on Friday and, as we really needed to fill up, there was nothing for it but to go to the next closest tap.  Fortunately, it wasn’t much further on but did entail going (twice) through a lift bridge which we were hoping to avoid as the road is fairly busy.

Steve & Tina, who have been moored near us for the last three weeks, had come past while we were having breakfast as they needed water too so we left it an hour or so before setting off.

Karen was under strict instructions not to do any locking because of her back even though she insisted she would be OK.  Happily, she was sensible and just held onto the lines as we went through the lock.

After coming out of the lock we turned sharp left up the old arm that used to lead to railway sidings. A sanitary station is sited at the current end of the arm and we thought we may as well do a pump out as we were sort of passing.  This was the first time we had used a manual pump out and, although it worked well, it certainly gave me a workout pumping the handle back and forth (photo at the top).

It’s a bit ironic that the arm used to lead to the railway sidings where freight was transferred between boats and trains, as the Great Western Railway purchased the canal in the railway company’s early days.  That sounded the death knell for the canal as traffic volumes decreased in face of the rail competition.

Aldermaston lock used to be called Brewhouse lock as it was sited next to a brewery as can be seen on this old schematic:

Once the tank was empty, we reversed back onto the mainline and waited by the lift bridge.  Steve & Tina were on their way back as they had finished taking on water and waited for us to come through the bridge first. By the time we were through there were long queues of road traffic either side and, as is often the case, we had friendly toots and waves from a couple of lorry drivers as we went through.

After we had passed through the bridge, we pulled up shortly afterwards at the water point.

Buddy acts completely differently when we are locking, taking on water or doing something similar with the boat.  If we're out for a walk he won't stay still and, if we're chatting to someone for example, he will be constantly sniffing and nosing around.  When on boat manoeuvres he finds a spot and just sits there until we are finished.

While were taking on water the CRT boat checker came past recording details of all the boats; Friday is the boat check day on this part of the K&A.  I told him that we were going back to where we had been for the last three weeks and he agreed that would be fine as the red boards were still on the river at either end of our section of canal.

The water tank took a while to fill as we had nearly emptied it, but once we were finished, we decided to reverse back through the lift bridge and turn at the entrance to the arm.  We had originally planned on going through the next lock and spinning the boat at a winding hole just the other side but realised it would be much quicker risking a reversing manoeuvre.  Ceilidh, like our boat, doesn’t have bow thrusters which can come in handy keeping the boat on course when reversing and therefore makes reversing a little awkward because the propeller is at the wrong end of the boat.

Karen went ahead to set the lift bridge operation in motion, and we passed safely through; once more greeted by a couple of friendly lorry drivers.

After turning at the entrance to the arm, it was back up the lock and then back to our mooring spot.  With more rain forecast we decided it would be a good idea to turn around again so we would be facing the right way if we wanted water again before the river levels dropped sufficiently.  This meant passing our mooring spot and spinning the boat where the cut meets the river.  Turning at a river junction is relatively simple as long as you position the boat correctly.  The river current can be used to bring the front of the boat around as the turn is made.

I was part way through the manoeuvre when some kayaks appeared, so I hovered in the river flow by keeping the engine in gear as they went past.  All of a sudden, a narrowboat came out of the marina further down the river and clearly wasn’t giving way to anyone. I’m not sure how he missed two of the kayaks, but I could hear them admonishing the driver as he cut them up. 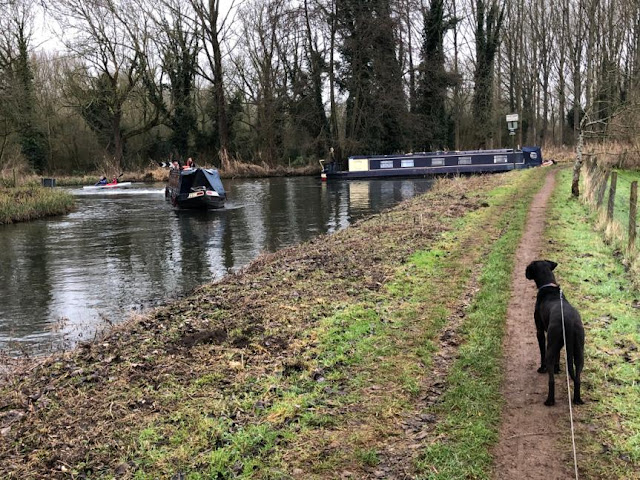 One of the kayaks can be seen behind the boat and he had come from the right with the intention of turning left towards Buddy.  The boat cutting him up had caused the kayak to head in the wrong direction down the river.  The boater clearly wasn’t going to hang around waiting for me to finish turning so I thought the safest thing was to head upriver out of the way while he turned onto the cut.


By the time we finally moored up we realised it had taken four hours to get water and do a pump out.  We had travelled hardly any distance but felt shattered so spent the rest of the day on board apart from a couple of short strolls.

On Friday we cruised about 1 ½ miles through two locks.